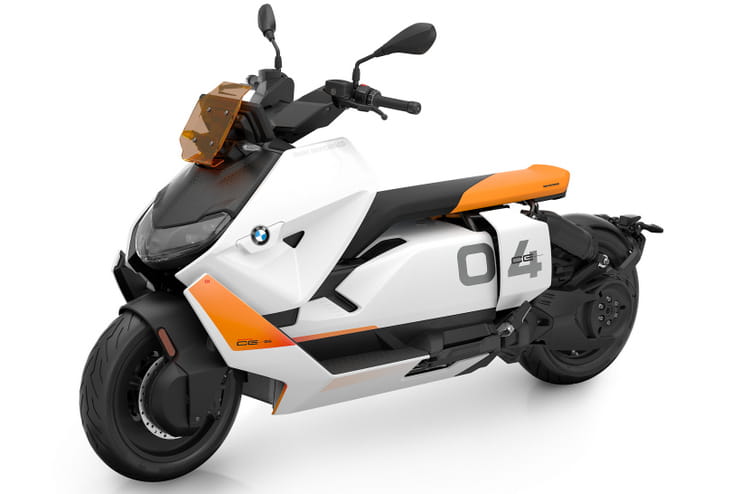 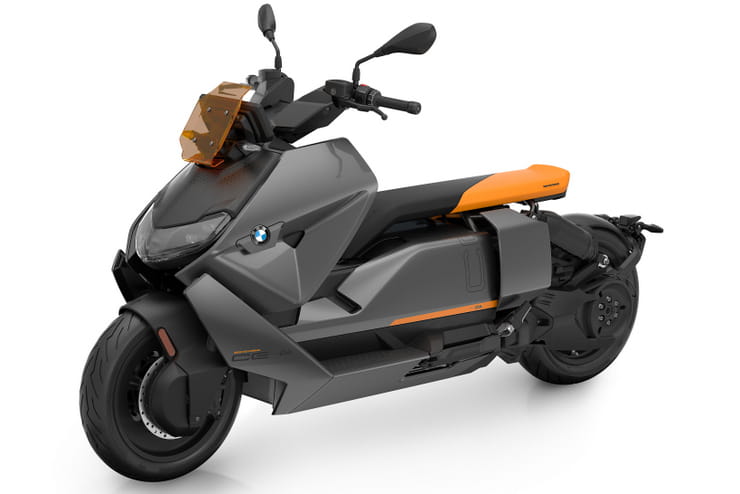 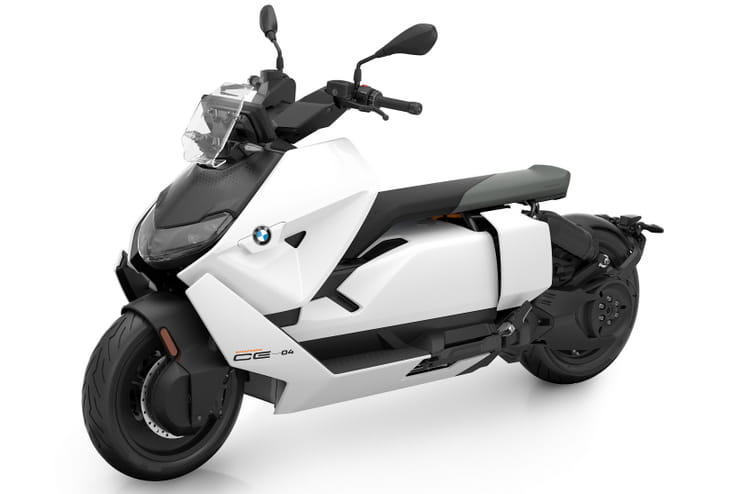 Remember when BMW was considered a conservative bike firm? A company that leant on staid styling and a reputation for steadfast reliability rather than trying to engender excitement? Never has it been clearer that those days are gone than now as the firm’s new CE 04 brings concept bike looks and technology to the real world.

The CE 04’s launch as a production bike doesn’t come as a surprise; the firm showed the bike as the Definition CE 04 concept last year and way back in 2017 revealed the initial styling model as the Concept Link, but four years ago it would have been hard to imagine that show bike reaching dealers in such an unaltered form.

We’ve talked about the CE 04’s appearance before, as well as its design details like the side-accessed under-seat storage, but with its official unveiling BMW fills in the blanks when it comes to the bike’s power, performance, the all-important range and – vitally – the price. 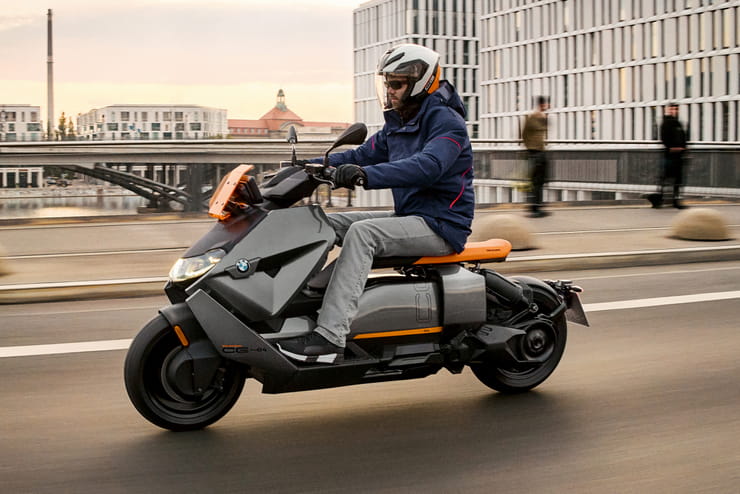 Let’s start with power and performance. The CE 04 uses a liquid-cooled, permanent magnet synchronous motor, revving to 12,300rpm and capable of putting out a peak of 42hp, but as ever with electric bikes that number isn’t quite as straightforward as it initially appears.

The 42hp figure is the absolute peak that the bike can achieve, but it’s actually rated as making 20hp; that’s the output that can be maintained for an unlimited period without overheating, while the peak power is available for brief periods (rather like the max output of a combustion engine).

Another layer of complexity comes from the fact BMW will also offer the bike in ‘A1’ form, equivalent to a 125cc bike and legal to use with a provisional licence and L-plates. In that form, the rated power is 15hp, which is the maximum allowed under learner laws, but the peak is 31hp. In other words, the CE 04, in learner-legal form, puts out more than twice as much power as you’d be allowed to have on a combustion engined bike.

Those figures add up to a top speed of 75mph – the same figure is quoted for both versions of the bike – and 0-62mph acceleration of 9.1 seconds for the high-power model and 9.9 seconds for the learner-legal machine. 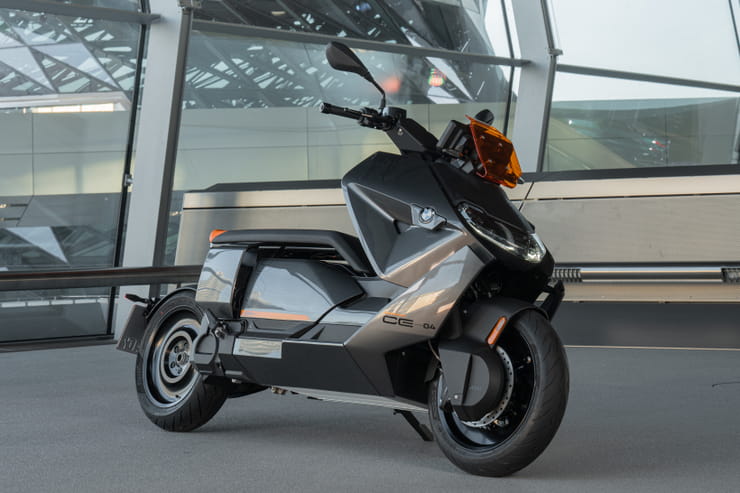 The numbers mean the CE 04 is actually a little slower than the machine it replaces, BMW’s C-Evolution scooter that ushered in the electric era for the firm. It was good for around the same top speed but hit 62mph in around 7 seconds.

However, the C-Evolution was a heavier and pricier bike, weighing in at a whopping 275kg and costing as much as an R1250GS. The CE 04, in contrast, weighs 231kg despite being nearly 100mm longer than the C-Evolution at 2285mm. It’s also cheaper, although ‘cheap’ is still a relative term. The CE 04 starts at £11,550, with the option to add various options. There’s an ‘avant-garde’ cosmetic package that adds concept bike style graphics and the orange seat and screen at £220, a ‘city’ package for £780 that includes tyre pressure monitors, a heated seat, centre stand and alarm, or a ‘comfort’ package with a different seat and heated grips for £450. Most tempting, though, is the ‘dynamic’ package, which adds adaptive lighting and Riding Mode Pro including cornering ABS for £380. 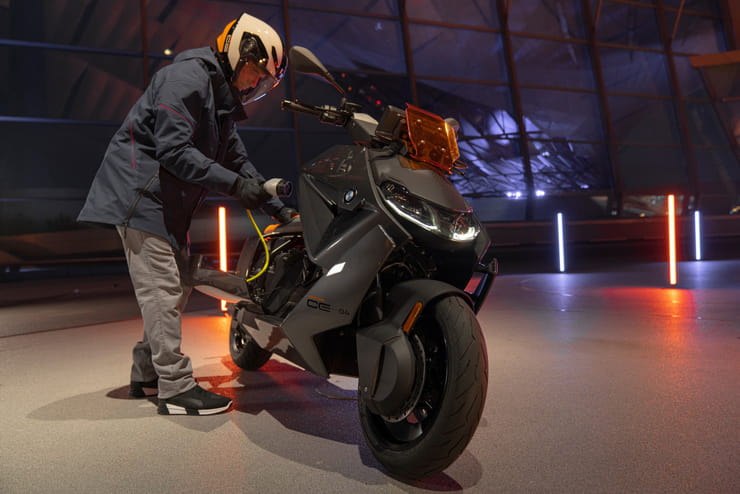 Range is the other big question for electric bikes, and here the two versions of the CE 04 perform differently. The full-fat model is rated as good for 80 miles between charges, while the learner-legal A1 version can only achieve 62 miles. That seems a little strange, as both models have the same 60.6Ah, 147.6V lithium-ion battery pack.

The charging times also differ between the models, with the longer-range, higher-powered version taking 4h 20m to charge from flat to 100% via a slow charger, or 1h 40m via a fast charger that’s available as an option at a hefty £850. In a more real-world situation, charging from 20 percent battery to 80 percent takes 45m from the quick charger.

The A1-spec model has quicker charging times – 3h 20m for a full charge at a normal socket, or 1h 10m from a fast charger. Along with the reduced range, that suggests the learner-legal bike is programmed not to use the full capacity of the battery pack.

Unlike most electric motorcycles, the CE 04 also uses regenerative charging, replenishing the battery when you’re coasting. The bike’s riding modes alter the regen effect as well as the power delivery and battery usage – ‘Eco’ adds more ‘engine braking’ effect and regen and limits acceleration to save battery power, ‘Rain’ cuts the engine braking effect and gives smoother acceleration, ‘Road’ allows full performance. The quoted range figures are measured in ‘Road’ mode. If you opt for the Dynamic package, you also get a ‘Dynamic’ mode that combines max acceleration performance with extra engine braking effect. 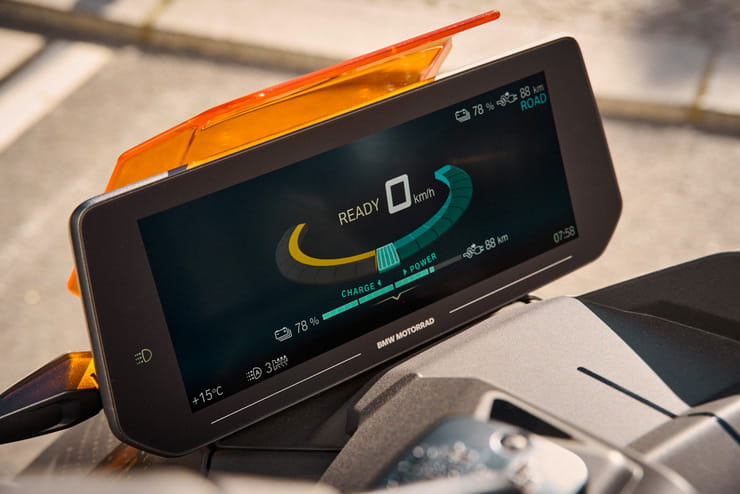 As you’d expect, all those modes are accessed via a futuristic-looking, full-HD TFT dash, complete with built-in navigation and all the usual phone connectivity options. As well as nav info and all the usual details about speed and trip, the dash also gives less familiar readouts about the battery’s state of charge and the amount of energy that’s being used and regenerated, all with the aim of helping riders eke out extra miles of range.

Of course, there’s also a companion app for your phone, which has a dedicated storage box in the bike’s fairing, complete with USB-C connection for charging, a phone-gripping bracket and a lid that automatically locks with the bike’s central locking system. The box is even ventilated to keep your phone cool as it charges, and splashproof to make sure it doesn’t get damp. An ‘eCall’ system that automatically dials emergency services after an accident is also available as an option.

Other optional kit includes luggage, sticker kits, charge cables and – perhaps most surprisingly – a jacket that mirrors the LED-lit design that was unveiled alongside the ‘Definition CE 04’ concept bike last year. Called the Tokyo Connect GTX parka, it has RGB LED strips, each individually adjustable for colour, and a Bluetooth connection to your smartphone. For true cyberpunk effect, there’s even a touch panel sewn into the sleeve to activate the lights and operate the Bluetooth connection.

The jacket can be used with a powerbank or plugged straight into the CE 04’s 12v accessory socket, and has an inside pocket that includes a charging connection for your phone. Along with all that, it’s got removable protection in the shoulders and elbows and a slot for a back protector, while the shell is a three-layer, breathable Gore-Tex Pro material.

A helmet designed to match, the Sao Paulo, is also part of the options range if you want to be able to completely mimic the models that posed with BMW’s original concept bike.