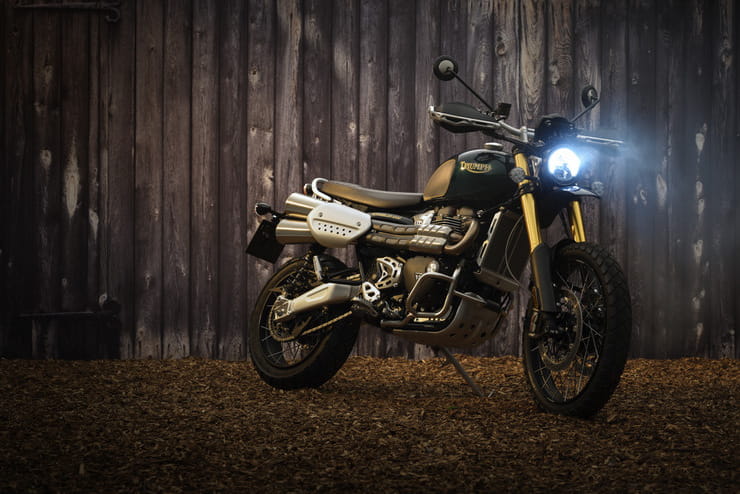 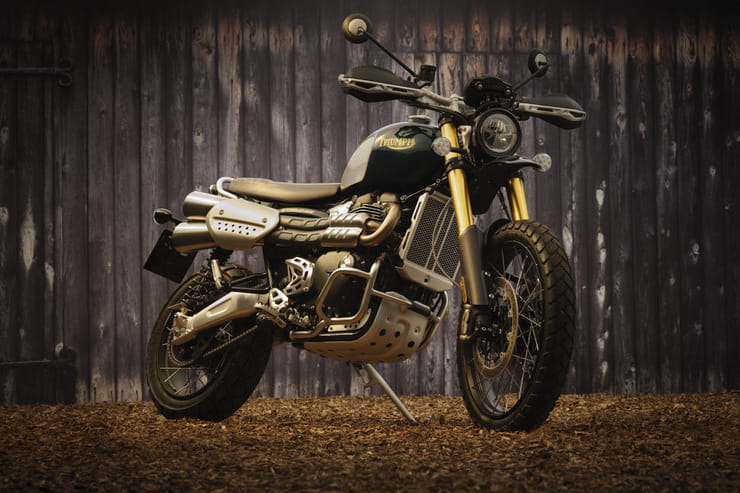 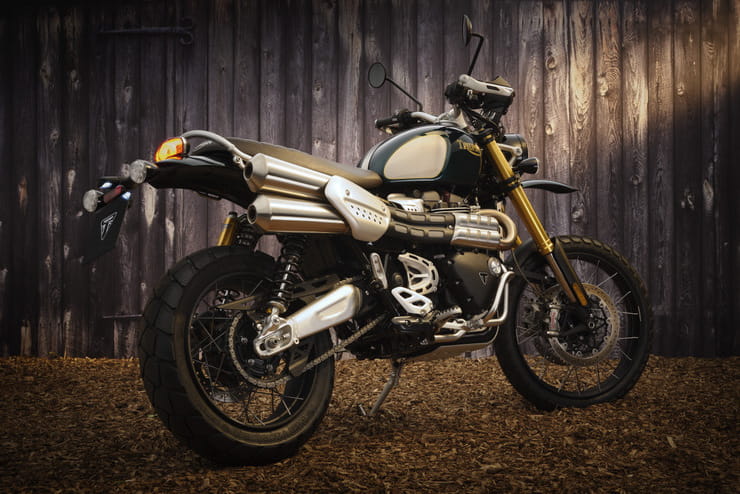 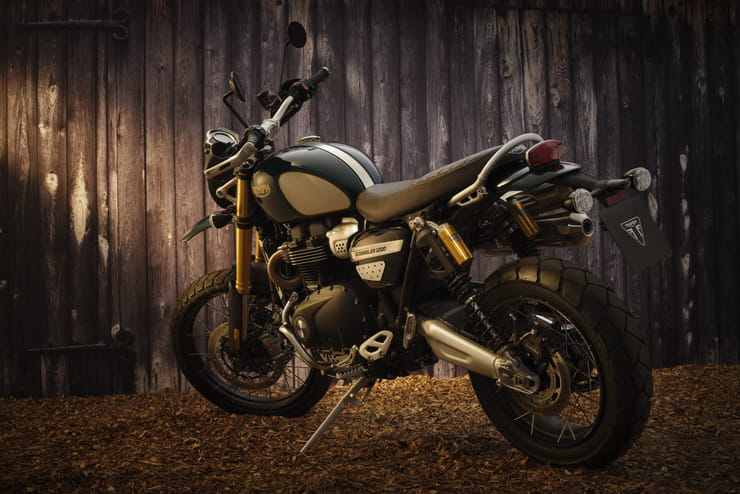 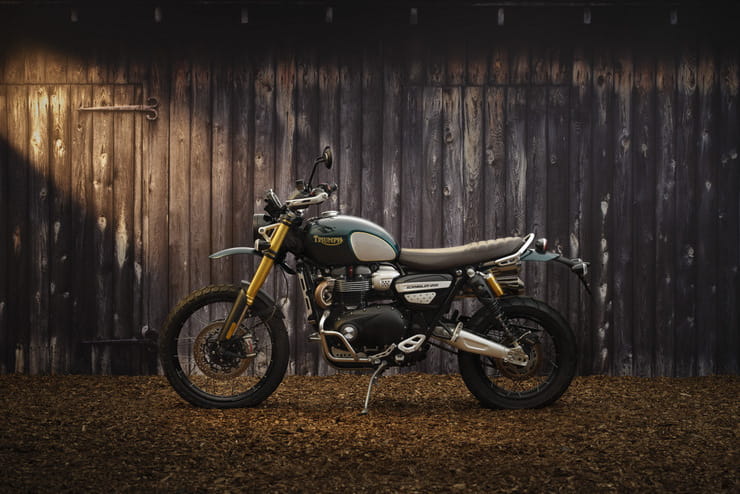 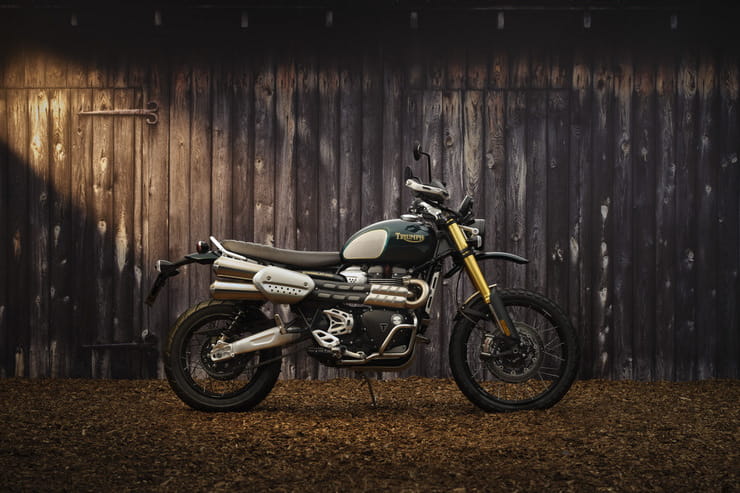 The most famous Triumph ever made must surely be the Trophy TR6 used for the legendary barbed wire jump sequence in The Great Escape – and now the firm has joined forces with the Steve McQueen estate to offer a limited-edition version of the Scrambler 1200 to pay homage to that moment.

Unusually for a bike with a celebrity name and limited-edition status, it’s not vastly more expensive than the Scrambler 1200 XE it’s based on, either – with a premium that’s largely accounted for by the extras that come as standard – and with just 1000 being offered worldwide they’re not likely to hang around for long. 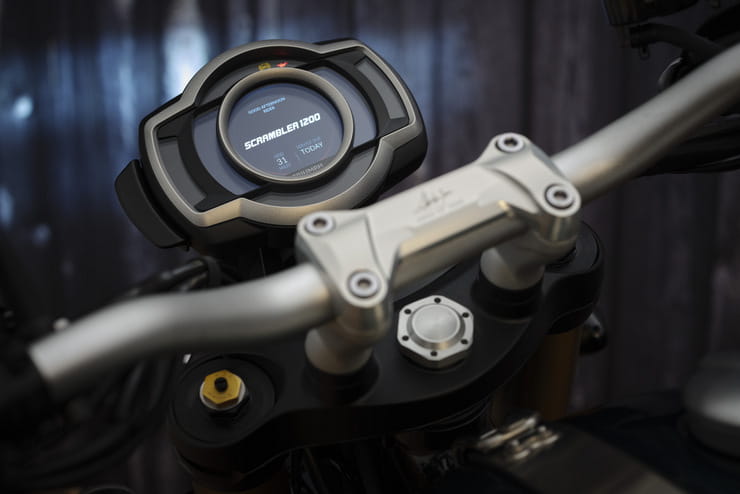 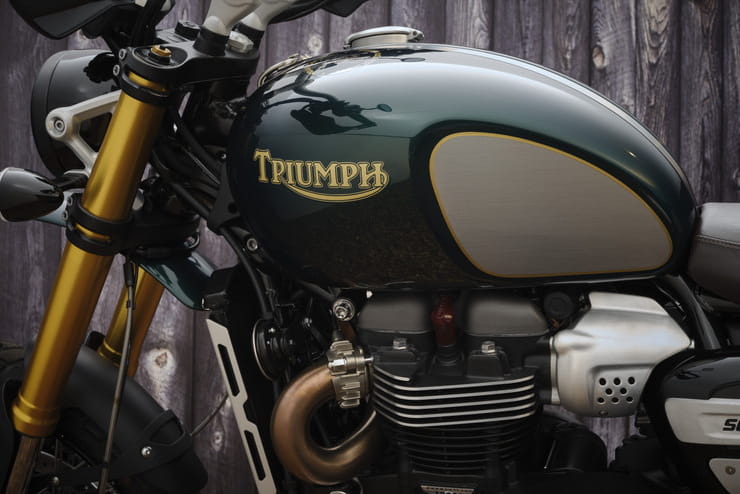 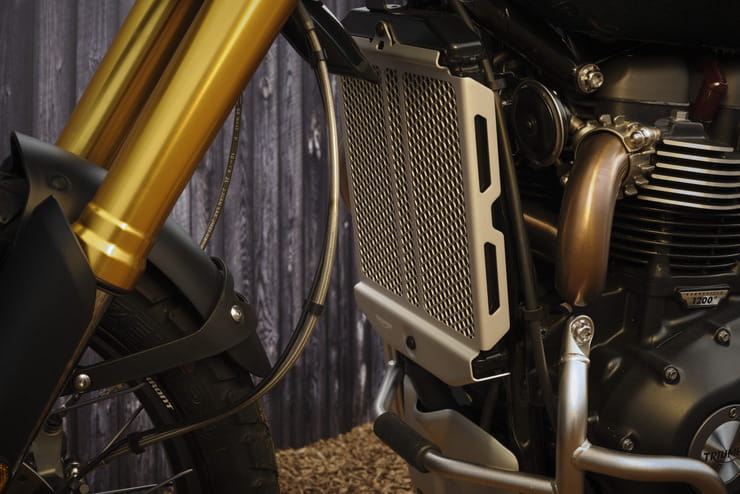 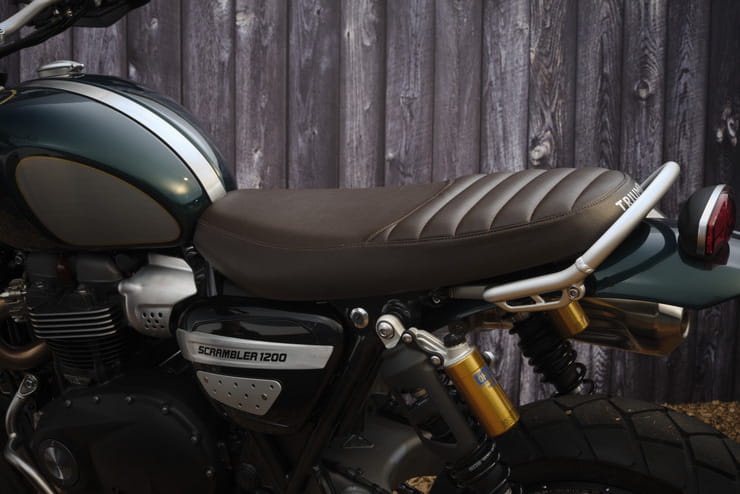 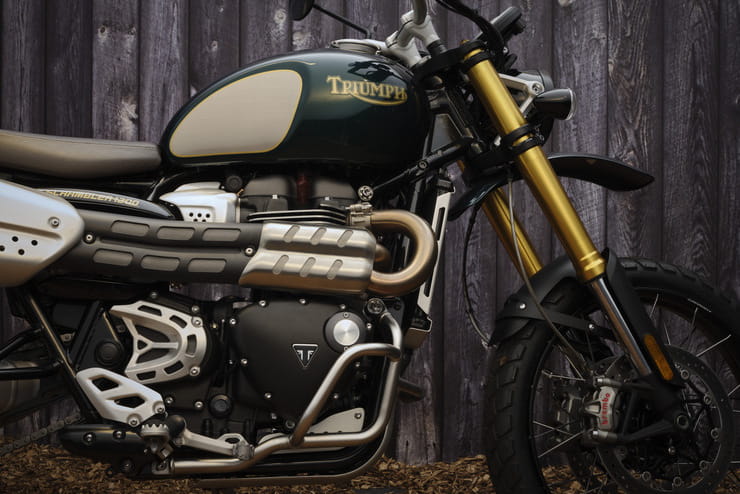 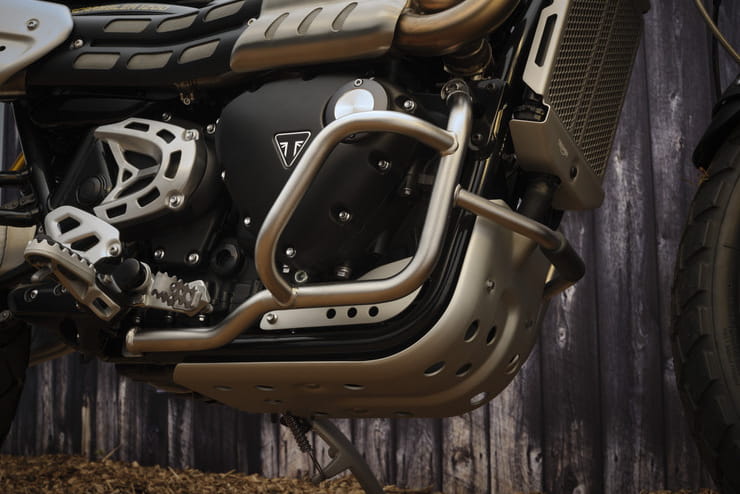 Before we get onto the details of the McQueen edition, its unveiling coincides with a range-wide revamp for the Scrambler 1200, bringing both the XC and higher-spec XE versions into line with Euro 5 emissions limits.

To do so, Triumph has developed a new exhaust that meets the new limits without changing the bike’s style, while simultaneously improving heat dissipation to stop the high-level system cooking the rider’s right leg.

The exhaust is complemented by a new ECU and mapping to meet the new emission limits without strangling the engine’s output. Power remains unaltered at 89bhp at and torque still peaks at 81.1lbft, although the new map means those high points shift slightly in the rev range. Max power now comes at 7250rpm instead of 7400rpm, while you now need 4500rpm instead of 3950rpm to get the most torque.

Other than that, the bikes will be familiar to any current Scrambler 1200 owner. As before, there’s high-spec suspension with Öhlins shocks and Showa forks, both fully adjustable, allied to Brembo M50 calipers and a healthy portion of high-tech in the configurable TFT dash, the multiple riding modes, LED lighting, keyless ignition and backlit bar controls. The up-spec’d XE version also benefits from cornering ABS and traction control courtesy of an IMU, as well as a longer swingarm and more suspension travel, gold forks, wider bars, folding foot controls and standard hand guards. It also features additional off-road-oriented riding modes that the cheaper XC does without. 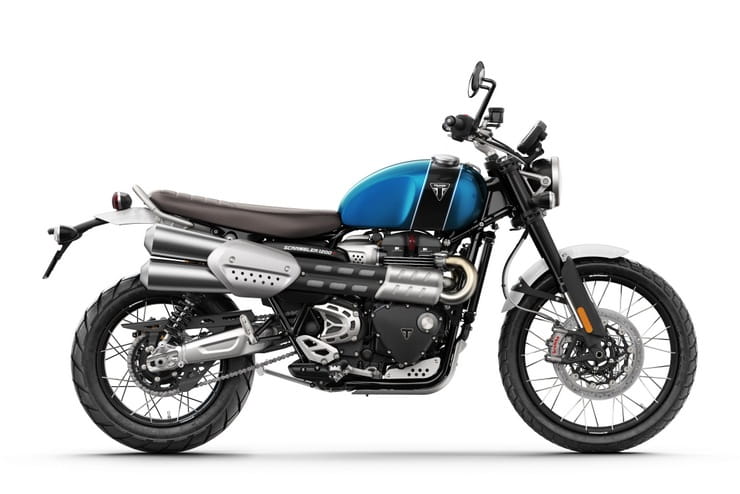 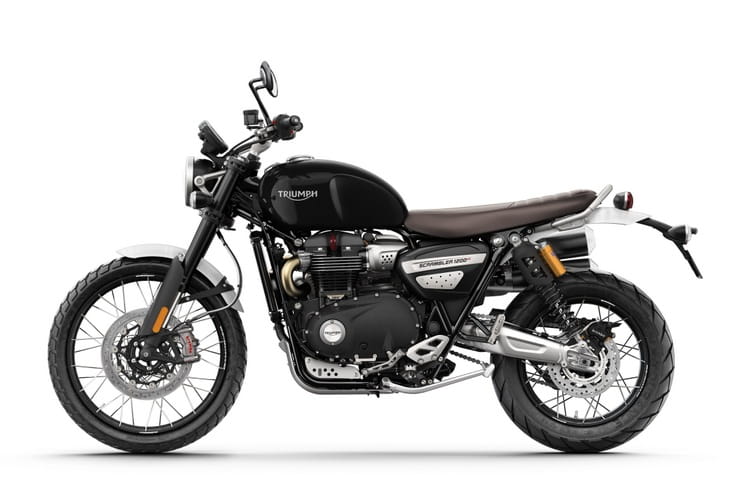 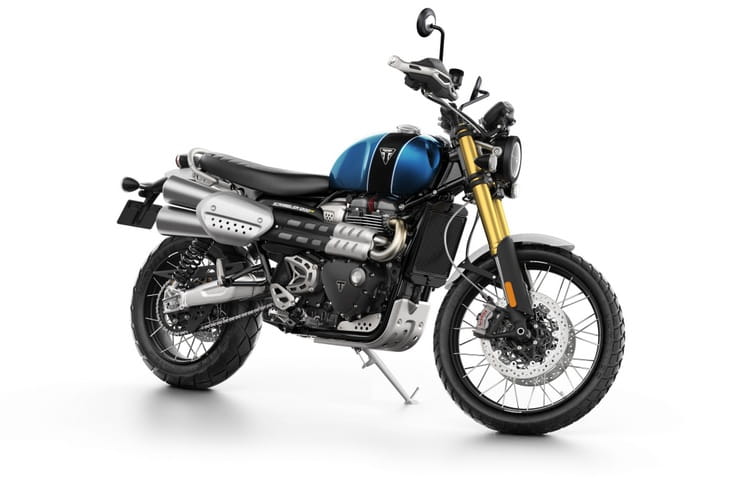 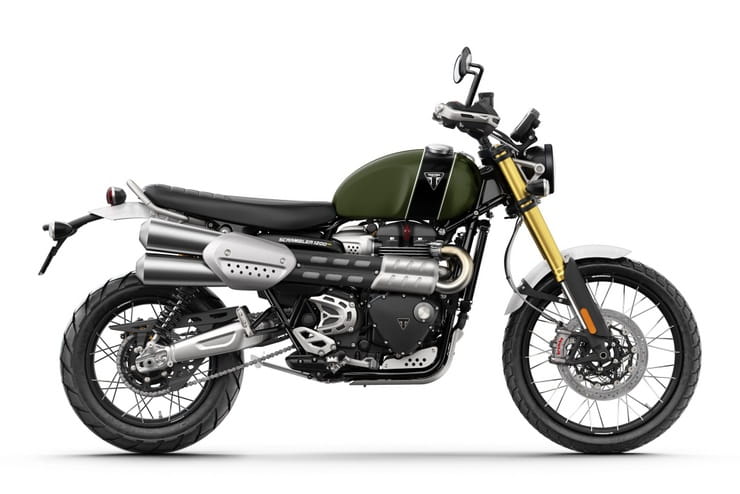 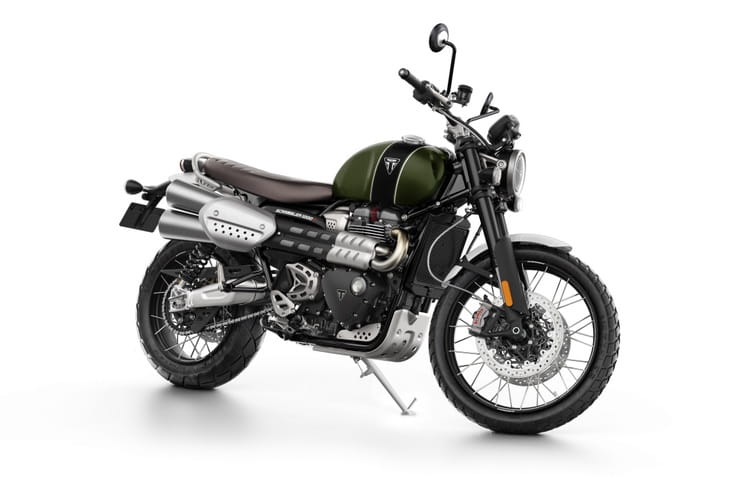 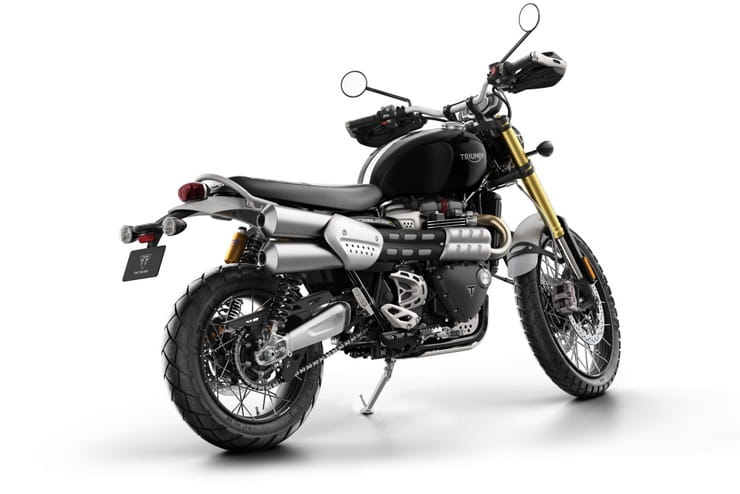 Which brings us to the Steve McQueen Edition, which tops the range at £13,600. For that extra £1000 over the XE it’s based on you get extras including stainless steel crash bars, a laser cut radiator guard, a ‘premium’ brown seat and a high-mounted aluminium front mudguard. Pick those options on top of the price of a stock XE and you’ll be getting near the McQueen’s list price before you even get to the special paintwork in Competition Green, included painted rather than bare alloy mudguards front and rear plus hand-painted gold lining and brushed foil knee pads on the tank, or the individually numbered bar clamp that also includes a laser-etched facsimile of Steve McQueen’s signature.

As the bike has been created with the blessing of the McQueen estate, the limited-edition also comes with a certificate of authenticity that’s signed by Chad McQueen, Steve’s son, and by Triumph CEO Nick Bloor.

The 250 limited-edition Scrambler 1200s made last year to celebrate the tie-in with the still-delayed Bond movie, No Time To Die, sold out rapidly despite a hefty £18,500 price tag, so the much more affordable Steve McQueen model – with ties to a film that’s always likely to be more famous than the 25th Bond flick – is likely to be just as popular. Triumph hasn’t finalised how many will be sold in each market, but with just 1000 available worldwide no country can have more than a few hundred of them. Dealers are taking orders for the bikes right now.

If the McQueen model isn’t your style, the 2021 Scrambler 1200 XC and XE will be offered in non-limited-edition forms in Matt Khaki Green or Cobalt Blue, both with a black stripe across the tank, or in plain Sapphire Black.