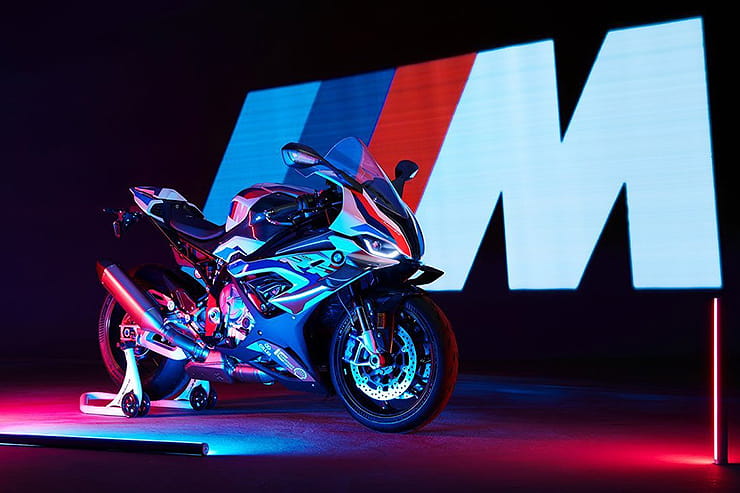 Last September BMW filed trademark applications for three new ‘M’ branded motorcycles – the M1000RR, M1300GS and M1000XR. Now the first of those machines has been unveiled and it’s aimed squarely at bringing BMW into contention for the WSB championship.

The M1000RR is BMW’s equivalent to Ducati’s Panigale V4R – a homologation special, designed to meet FIM WSBK and Superstock rules offering increased performance and race-tuning potential compared to the normal S1000RR. It’s built around a revised version of the S1000RR’s Shiftcam inline four, now rated at 209bhp (212PS, 156kW) in road-legal form, plus race-inspired weight loss, suspension and aerodynamics to create a package that comes in at a mere 192kg ready-to-ride. In short it’s the most potent street-legal production bike BMW has ever made, and one that gives the firm the best chance yet of getting the racing success that’s eluded the firm in the decade since the S1000RR was launched. 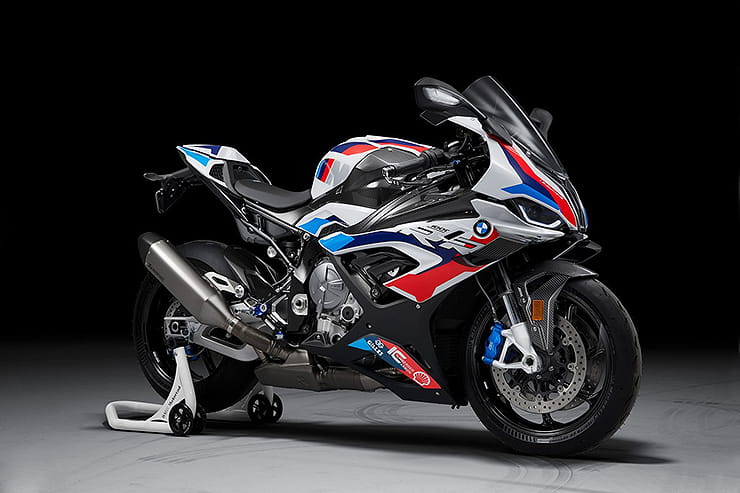 Let’s start with the changes to the engine. While the capacity of BMW’s Shiftcam four-cylinder is already right at the limit, and its variable valve timing and lift offers greater tuning potential than its fixed-valve-timed rivals, BMW has still found ways to improve it.

The big changes are the adoption of new pistons – 12g lighter each – longer and lighter titanium con rods, slimmer and lighter rocker arms and a higher 13.5:1 compression ratio. Those add up to a 500rom higher redline, now 15,100rpm, five extra horsepower at 14,500rpm and greater performance than the normal version all the way from 6000rpm to the redline.

Peak torque of 83lbft at 11,000rpm is unchanged, but the M1000RR gets a 46 tooth rear sprocket instead of the normal 45 tooth design, giving shorter overall gearing that will inevitably result in stronger acceleration.

The engine’s intake ports are also tweaked, with new geometry to improve flow, while the titanium exhaust valves get new springs.

The 2mm longer titanium con rods reduce lateral loads on the pistons, adding to the bike’s race tuning potential. Each rod weighs a mere 85g despite the vast forces it needs to cope with.

Like the S1000RR, the M1000RR has variable-length intake trumpets, but they’re shorter than before to improve top-end performance. A new Akrapovic titanium exhaust system cuts a remarkable 3657g from the weight of the stock pipe, totalling just 7780g.

In terms of outright performance, BMW claims the M1000RR reaches 62mph around 0.1 to 0.2 seconds faster than the S1000RR and hits 125mph 0.4s quicker. Not vital on your daily commute, but significant in the race to the first corner.

Launch control, an up-and-down quickshifter and a pit lane speed limiter are also standard, as is a ‘Pro’ version of BMW’s hill start control with adjustable settings (although if you haven’t mastered hill starts, maybe the M1000RR isn’t for you…) 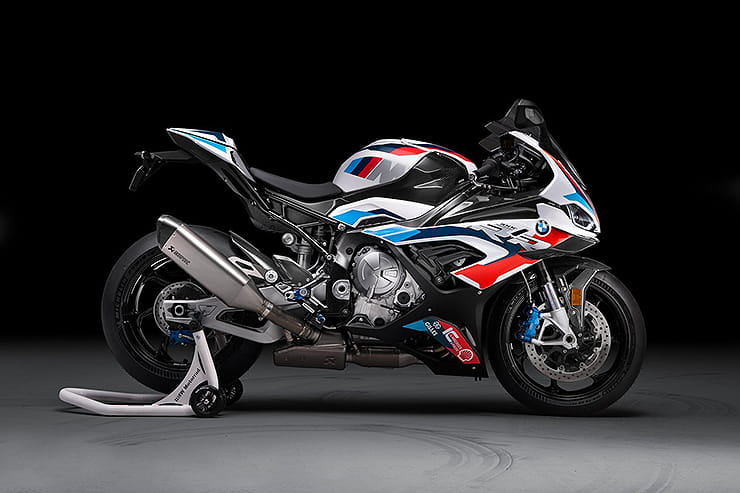 The engine changes might be significant, but the M1000RR’s aero updates are more noticeable. Like an increasing number of its rivals, the BMW has grown wings.

While we’ve recently seen BMW developing advanced active aerodynamics, its first production foray into the field is with conventional fixed-position winglets on either side of the nose. Designed to help keep the front of the bike down during acceleration, allowing the rider to use more throttle without wheelying, the BMW winglets are intricately-designed carbon-fibre parts that are claimed to create as much as 13.4kg of downforce at 186mph.

The M1000RR also gets a new, taller windscreen that BMW claims reduces wind resistance and offsets the extra drag of the winglets so top speed isn’t reduced.

BMW says that during tests with Tom Sykes and Eugene Laverty, the M1000RR was 0.5s to 0.7s per lap faster with the winglets fitted than without. Speaking of lap times, the firm says that BMW World Endurance rider Markus Reiterberger, on a stock M1000RR fitted with slicks, was just 2.101s slower than Tom Sykes and 1.590s slower than Eugene Laverty when they were riding full WSB-spec machines that were 15hp more powerful and 15kg lighter.

While we had been hoping that BMW might have used the lessons learned on the HP4 Race to bring carbon-fibre frame technology to the M1000RR, the firm has stuck with the normal aluminium chassis. That’s probably as a result of having to meet the strict €40,000 WSBK price cap for homologated street versions of the racers – something the M1000RR does with ease, with a UK list price of £30,935.

The chassis might be familiar but the M1000RR gets new suspension geometry with a 23.6 degree head angle and 3mm less fork offset. Wheelbase grows from 1441mm to 1457mm in the process, thanks in part to a swingarm that’s 11.7mm longer than the normal version. The swingarm pivot point is also more widely adjustable than on the stock S1000RR.

Other chassis tweaks include milled alloy triple clamps and revised rear suspension geometry that increases the rear ride height by 6mm. It’s all slowed down by new ‘M’ brakes developed with Nissin with lighter calipers and thicker discs than the stock S1000RR. 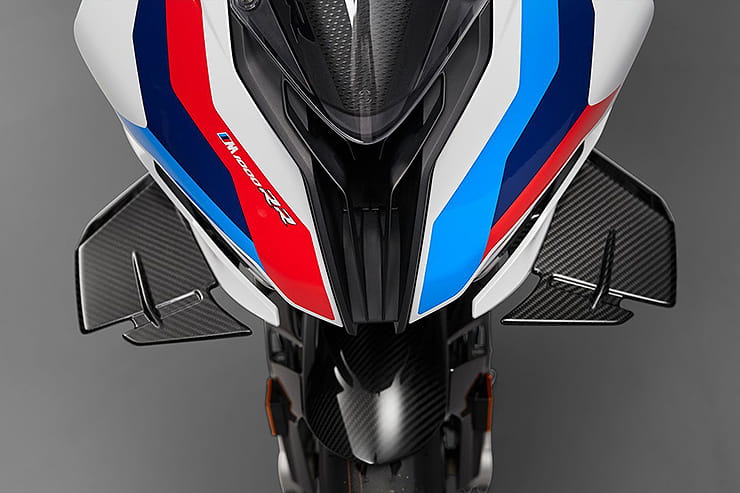 While the bike’s on-board view is largely familiar the TFT dash gets customised displays for the M1000RR, and if you splash out an extra £4100 for the ‘M Competition Package’ you get an activation code that allows comprehensive data logging to be downloaded via the bike’s OBD port.

That M Competition Package also brings the software for a GPS lap timer trigger and an array of milled alloy parts including levers and footrests, the ‘M’ carbon package and a 220g lighter swingarm as well as the firm’s newly-released M-Endurance chain, which is DLC-coated to prevent wear and eliminate the need for regular adjustment. A pillion seat cover completes the somewhat pricy set.

Will the M1000RR be what it takes to bring BMW into contention in WSBK? The firm will certainly be hoping so. At the time of writing Sykes and Laverty are languishing in 11th and 13th places in the WSBK championship table and the firm is last of the five regular manufacturers in the constructors title race, behind Kawasaki, Ducati, Yamaha and Honda. Only Aprilia is behind BMW, and the Italian firm has only appeared in wildcard races with a single privateer bike this year. 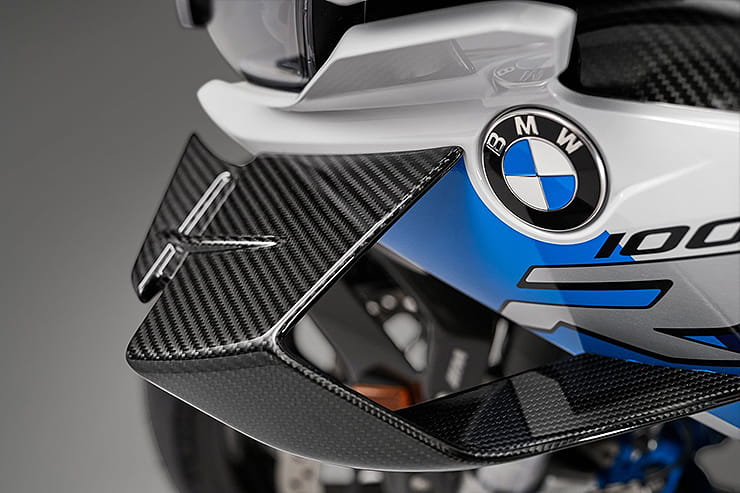