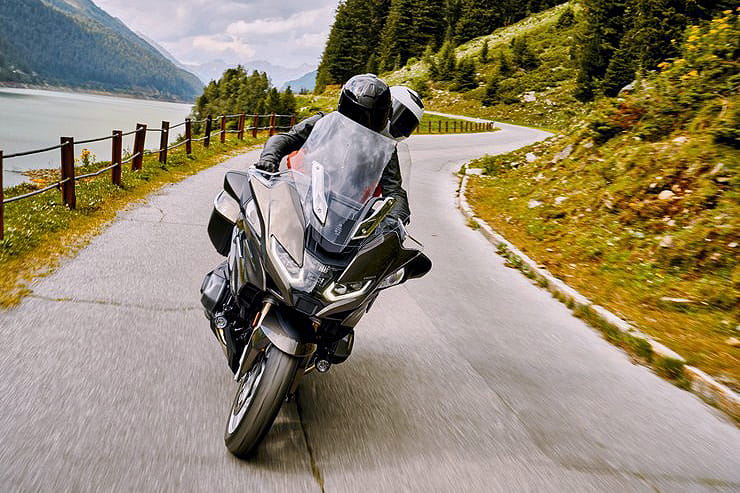 A new frontline on the high-tech battlefield has opened with the launch of optional radar-based adaptive cruise control (ACC) for the revamped 2021 BMW R1250RT.

Part of a revamp that sees the bike upgraded to meet Euro 5 emissions limits, the radar cruise is just one of a host of new standard and optional technologies that are added to the RT to keep it in place as a flagship touring model. It means that BMW and Ducati are both offering bikes with adaptive cruise control in 2021 – the system for the Multistrada V4 has already been announced – and they’re expected to be joined by KTM and Kawasaki in the near future, with all four companies signed-up to use the same Bosch radar system. 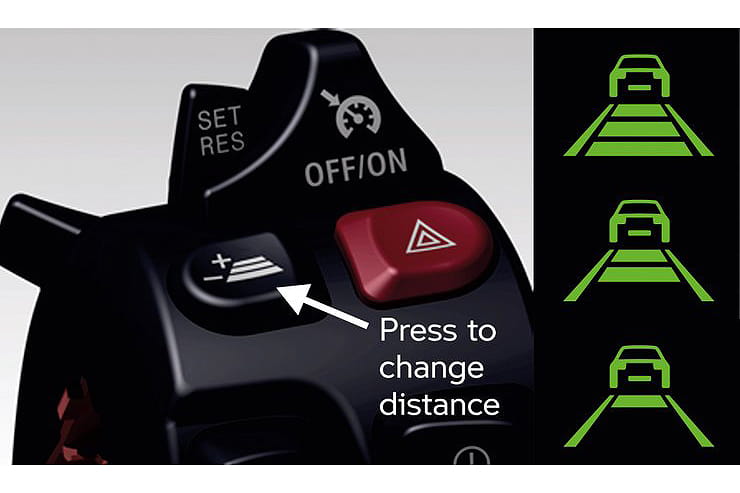 Given that both bikes use the same radar, it’s no surprise that BMW’s version also offers similar abilities to Ducati’s. Both work in the same speed range – from 18mph to 99mph – and allow the rider to preselect the distance that they want the bike to keep from the vehicle ahead. Once set, the ACC operates the throttle and brakes to maintain the chosen distance, so you just need to concentrate on steering.

On the R1250RT you can choose between three distance settings (Ducati offers four) and set the ACC’s responses to ‘comfortable’ or ‘dynamic’ to alter how rapidly its accelerates and decelerates. If you hit the brakes, increase the throttle or twist the grip forwards past the ‘zero’ position, the ACC is turned off immediately to return full control to the rider.

While the ACC is an optional extra – costing £500 on top of the 2021 R1250RT’s base price of £15,820 – you get BMW’s Dynamic Cruise Control (DCC) as standard, regardless whether you add ACC as well. DCC simply holds a preset speed – anywhere from 9mph to 137mph – and keeps the bike there, altering the throttle and brakes to maintain the same speed even when going up or down hills. 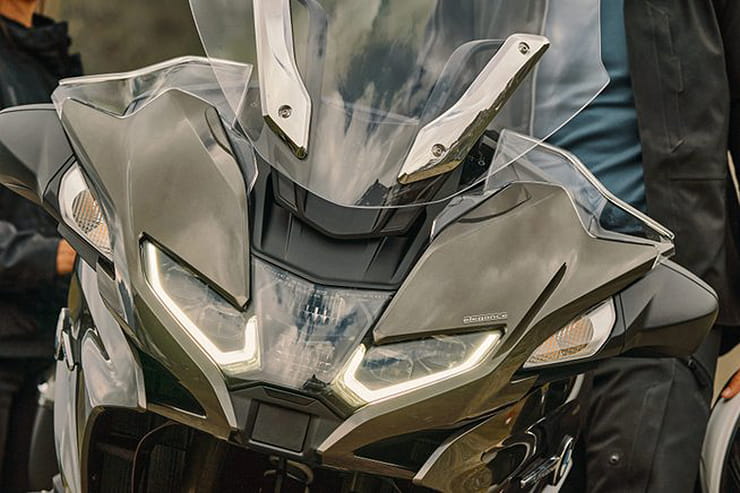 The high tech goodies continue with ‘BMW Full Integral ABS Pro’ as standard, which is the firm’s latest cornering ABS system that also incorporates dynamic brake force distribution between the front and rear wheels. It’s standard on all 2021 R1250RTs.

Also standard are new full LED headlights, which are also reshaped – along with the whole nose of the bike – to accommodate the radar sensor when the ACC system is fitted. Speaking of which, BMW appears to have made a better fist of neatly integrating the radar sensor into the bike’s nose than Ducati, although the black, rectangular box is still very clearly on display underneath the light.

Like the 2021 R1250GS, the R1250RT gets the option of a new adaptive headlight that sees the dipped beam lamp swivel inside its housing to remain level with the horizon at lean angles up to 35 degrees. The high beam lamps can also compensate for pitching movements by up to 2 degrees, with the system using the bike’s inertial measurement unit to work out what angle to move to. 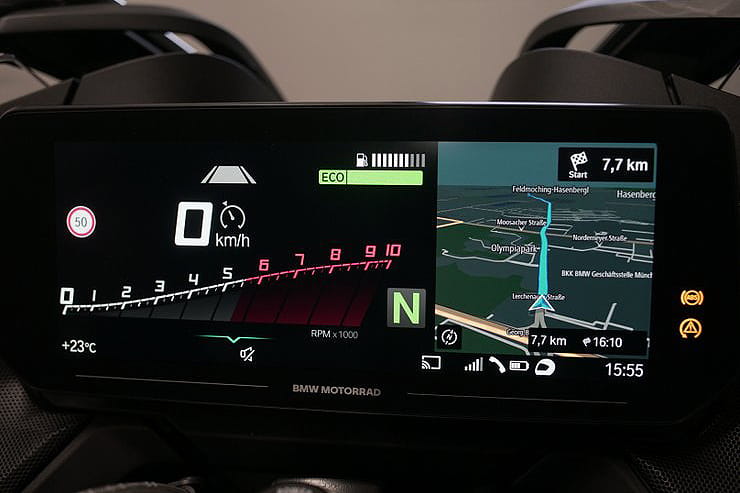 Behind the restyled nose lies a new 10.25in TFT instrument panel with integrated, map-based navigation and Bluetooth connectivity for media. You can also ramp this up with BMW’s optional ‘Audio System 2.0’, which includes FM, DAB and DAB+ radio, while US customers also get of satellite radio. Unlike the previous BMW radio systems, the 2.0 version has aerials hidden within the bike’s bodywork.

If you’re going for the full-on phone integration, it’s also worth a look at BMW’s new ‘comfort telephony with extended smartphone connection’ option. As well as a silly name, this gets you a splash-proof glovebox on the right hand side of the fairing with a centrally-locked lid and a built-in phone holder. It also has both a USB socket and its own wireless, inductive charge circuit and even a dedicated ventilation fan to keep your phone cool as it charges. 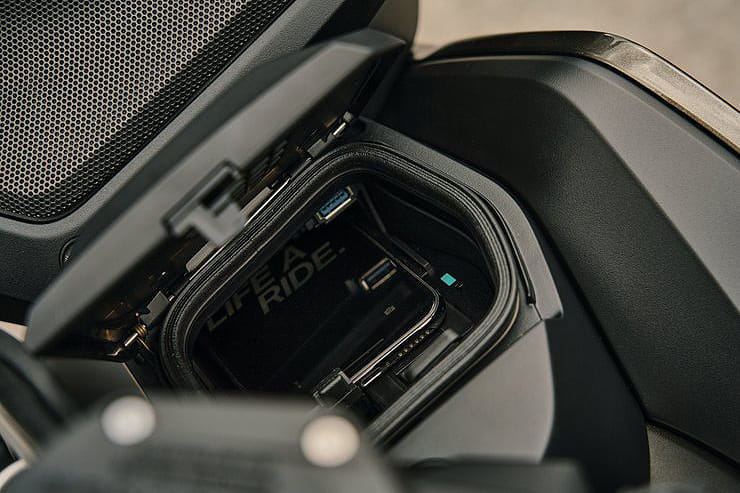 While BMW’s full explanation of the changes to the 2021 R1250RT extends to a booklet’s worth of detail, other key updates include the adoption of a new ‘Eco’ riding mode and the option of BMW’s Riding Modes Pro setup that adds ‘Dynamic’ and ‘Dynamic Pro’ settings. Cornering traction control is no standard, while the options list includes a ‘next-generation’ version of BMW’s ESA semi-active suspension and the same Hill Start Control Pro system that debuted on the new M1000RR.

To dig deeper into the vast array of options, you can already spec the 2021 R1250RT on BMW’s configurator at www.bmw-motorrad.co.uk, although deliveries aren’t expected to start until early 2021. 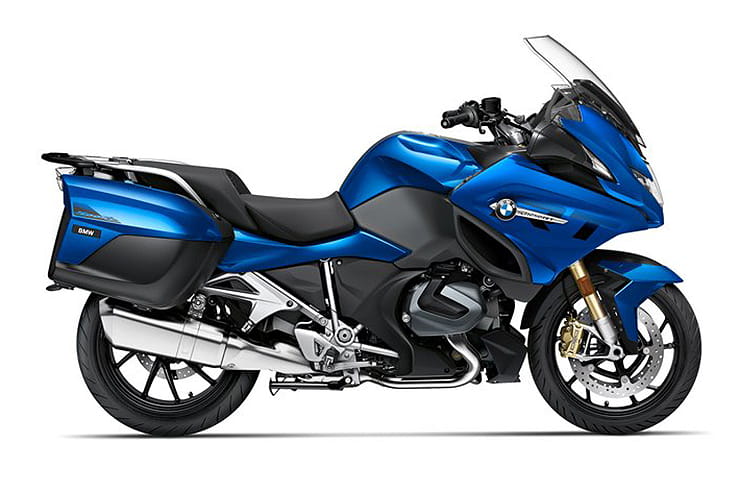