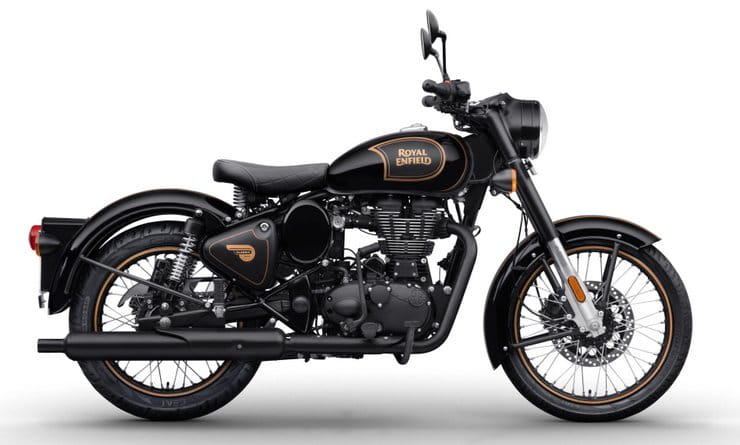 Royal Enfield has announced that it’s drawing a line under production of its long-lived 499cc single-cylinder machines in the face of strict new Bharat Stage VI emissions limits in India (equivalent to Euro 5) – but the company is preparing to replace them with completely redesigned 349cc singles all over the world.

The updated ‘350’ models have been regularly spied in India over the last few months and while Royal Enfield has traditionally skipped the 350 in Europe, opting instead to sell us the larger ‘500’ versions of the Bullet and Classic, Royal Enfield has now type-approved a Euro 5-compliant range of 350s for sale from this year onwards.

As well as the Bullet 350 and Classic 350 – which will be relatively familiar in terms of appearance, since they’ll look much like the existing Bullet 500 and Classic 500 machines – Royal Enfield has also type approved a ‘Meteor 350’.

We revealed last year that Royal Enfield planned to revive the Meteor after the firm registered a trademark on the name. At the time it seemed likely that it would be used on a derivative of the new twin-cylinder, 650cc models, but it’s now clear that it will appear on a new 350.

Looking at the dimensions of the Meteor 350 that have been filed with European type-approval authorities, it seems that the bike is a variant of the Thunderbird 350 that’s sold in India. It has a 20mm longer wheelbase than the Bullet or Classic, as well as wider, taller bars. Of course, RE can’t use the Thunderbird name in Europe, since Triumph has the trademark rights on the name over here. For the same reason, the cruiser is currently known as ‘Rumbler’ in Australia. Previously, Royal Enfield also trademarked the name ‘TBX’ in Europe, apparently to use on a version of the alloy-wheeled Thunderbird X 350, but that bike isn’t mentioned on the new documents.

We know that all versions of the new 350 make just shy of 20hp, which is about 7hp down on the outgoing 499cc models. However, Royal Enfield is sure to direct anyone wanting more performance to its twin-cylinder 650s. The new engine is also rather higher-revving that the current Indian-market 350, with peak power coming at 6100rpm rather than the 5350rpm of the existing model. Ready-to-ride, the Bullet and Classic 350s will come in at 193kg, while the Meteor 350 is 2kg lighter at 191kg.

With type-approval already granted, we expect the new Euro 5-legal Royal Enfield 350s to be launched imminently. In the meantime, a last-of-the-line version of the Classic 500 – the Tribute Black Limited Edition (above) – is going on sale for £4999 (£5199 including OTR charges), with deliveries starting in May.