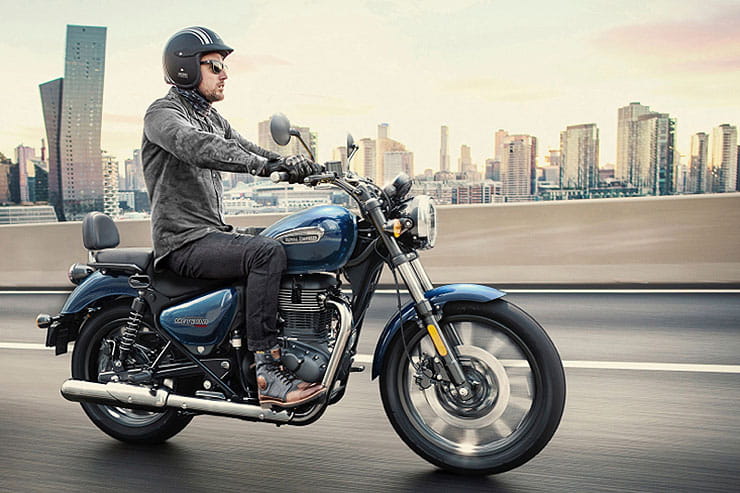 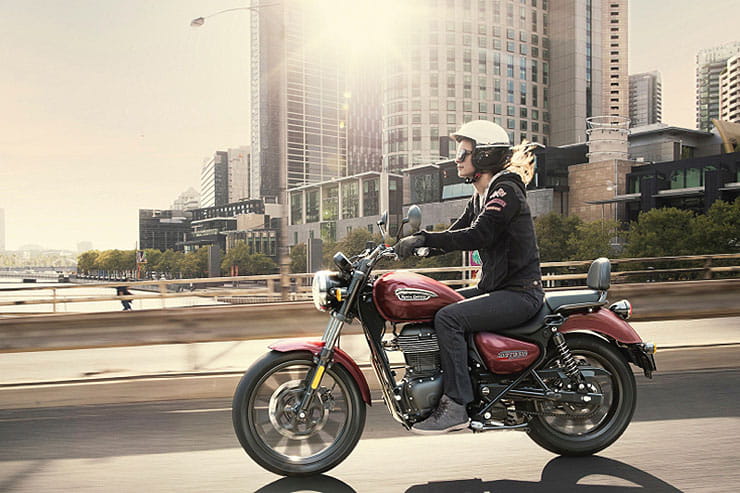 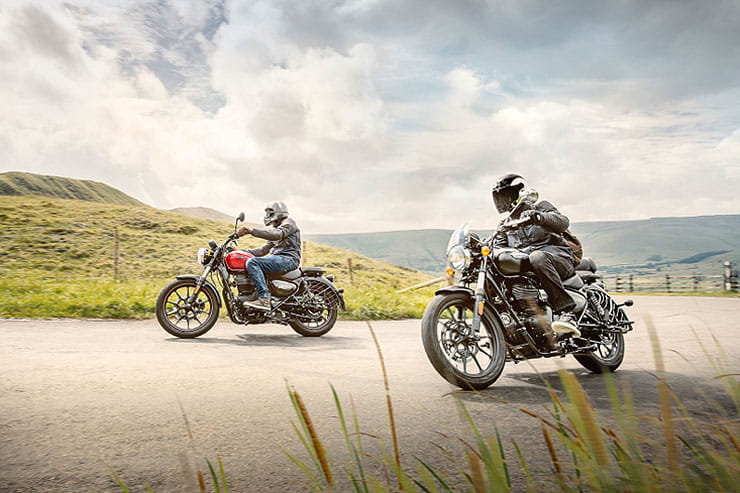 Royal Enfield has officially unveiled their new small capacity, single-cylinder cruiser, the Meteor 350 as a European model, mixing old-school charm that the brand characterises with a nuances of modern day engineering and tech, all in an affordable package with prices starting at £3749 for the base version of the three variants.

Developed in unison between the firm’s two technical centres in Chennai, India and Bruntingthorpe in the UK, the bike was revealed in India just last month. The 349cc SOHC air-oil cooled machine is the first Euro 5 emission regulation compliant motorcycle from the Eicher Motors-owned company, and it replaces the outgoing and non-conforming, long-lived, air-cooled 499ccc singles, as we suggested back in May 2019.

The new 4-stroke motor produces a peak power of 20.2bhp @ 6100rpm while peak torque is 19.9lb.ft (27Nm) @ 4000rpm, which point towards city riding and short hops as opposed to longer distance cruising or speeds of more than 70mph. The engine is hooked-up to a 5-speed gearbox as well as a balancer shaft so you can have your share of solo-cylinder thumpiness but thankfully with limited vibes. Economy-wise, the Meteor 350 is as frugal as Scrooge himself, churning out an expected 100mpg. 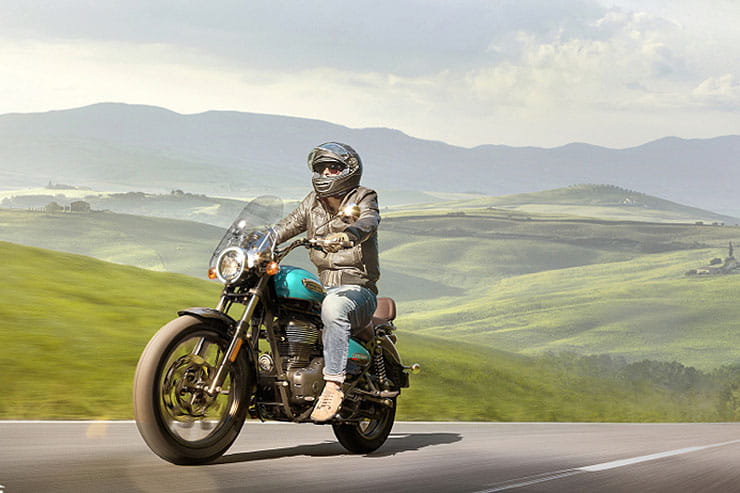 A very accessible low-slung 765mm seat height makes the Meteor 350 an attractive proposition to the new, inexperienced or shorter rider allowing for easy access and confidence-assisting when riding, particularly with a 1400mm wheelbase for added stability. The saddle sits atop of the new twin downtube spine frame and behind a 15-litre teardrop style petrol tank, while the feet-forward pegs demonstrate the Meteor’s cruiser emphasis.

Alloy wheels host tubeless tyres from either CEAT or MRF (both Indian firms that aren’t so familiar with UK customers) though Metzeler’s RoadTec are also approved fitments. They’ll measure 19” 100/90 at the front and 17” 140/70 at the rear while a rather simple suspension set-up to suit the price sees a set of non-adjustable 41mm forks with 130mm travel at the front matched with a set of twin shocks at the rear that are adjustable for preload through 6-steps. 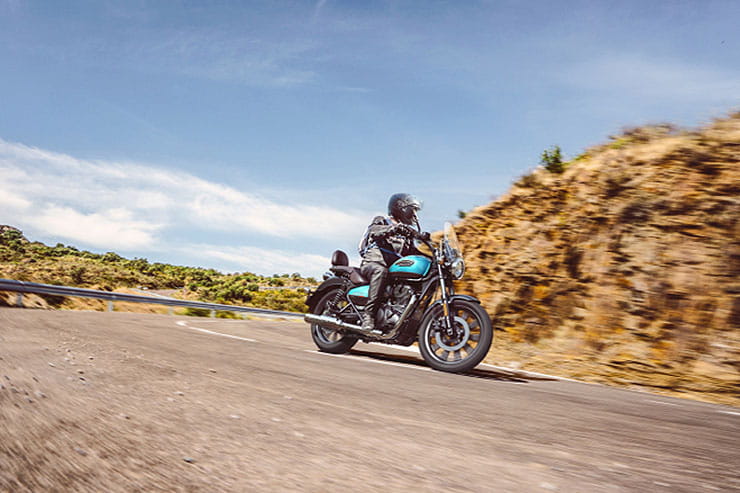 Flying in the face of the retro styling, the Meteor 350 features a very modern-day ‘Tripper’ navigation system, the first ever on a Royal Enfield. Powered by Google Maps and the Royal Enfield App that connects smartphones with the motorcycle via Bluetooth, it indicates directions through a separate and a smaller colour LCD info display adjacent to the retro-styled analogue speedo. If you’re not using it then the screen conveniently shows the time instead. Plus, there’s an additional USB charging port. Simon Warburton, Royal Enfield’s Head of Product Development confirmed the plan is to offer the Tripper system to other models beginning with the 650 Twins before Summer 2021.

The bikes are in production soon and will be heading to dealerships “before the beginning of the riding season,” said Arun Gopal, Head of Business Markets (EMEA). Over 30 official,  homologated accessories include engine guards, screens and seats and all come with the same 3-year warranty as the bike itself. Service intervals are at 10,000 km or 12 months after the first service at 500km.

Will the Meteor 350 live up to the expectations set by the 650 Interceptor and GT launched two years ago? The Twins have been strong sellers for Royal Enfield ever since, rising meteorically (I’ll get my coat) up the sales charts. 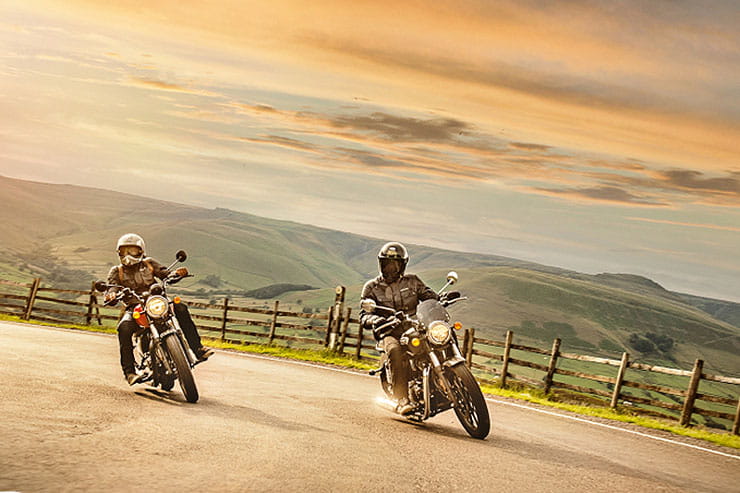 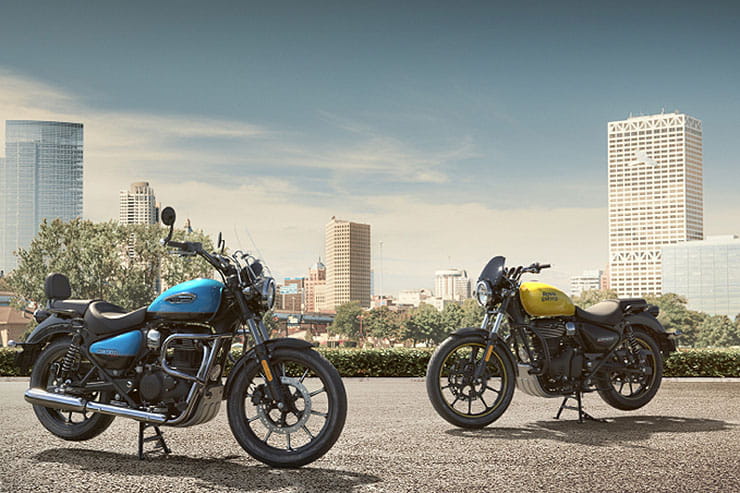