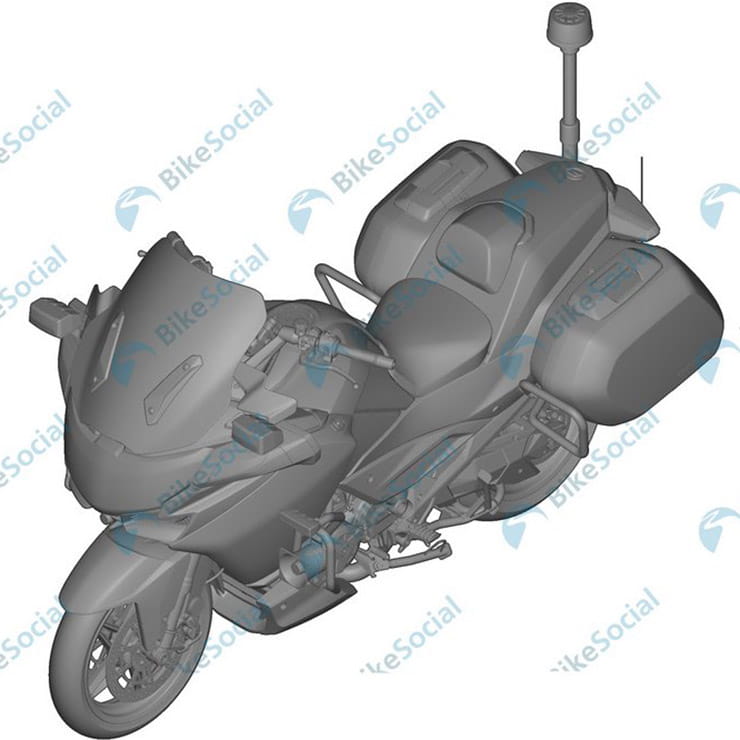 A couple of years ago Chinese firm CFMoto surprised the world with a concept bike based around a redesigned KTM LC8 V-twin engine. Now, with stronger KTM ties than ever before, the company is readying a 1250cc tourer using the same engine.

These images show CFMoto’s official designs for the new bike, albeit in police form. It’s fairly typical for Chinese-made tourers to reach the police before they get into the hands of the public. The massive contracts on offer from the Chinese government, which has an enormous fleet of motorcycles, can basically bankroll their development and CFMoto is a favourite to be awarded just such a deal around this machine. Its rival, Benelli owner Qianjiang, is also vying for the same government money by developing a three-cylinder, 1200cc shaft-drive tourer.

CFMoto’s advantage comes largely from the fact it’s already got a long history of supplying Chinese government bikes. The firm’s 650TR tourer is the current bike of choice for the country’s authorities. 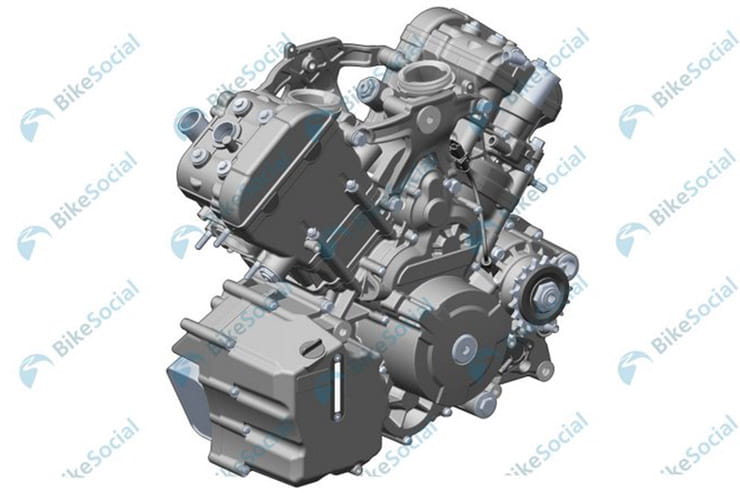 While it might reach the Chinese police and security services before the public, the new CFMoto illustrates how the company’s tie-in with KTM is likely to lead to the biggest, fastest and most convincing Chinese-made motorcycles in history.

CFMoto already makes KTMs for the Chinese market and has been earmarked to take on production of the firm’s 799cc LC8c parallel twin range – the 790 Duke and 790 Adventure – in the near future. The engine in this new bike is derived from KTM’s LC8 V-twin, the engine that currently powers the firm’s 1290 Adventure and Super Duke R, but it’s been heavily redesigned. Patent images for the engine itself show that the cases, cylinders and heads are all changed compared to the KTM version, but the layout remains unaltered. The bike’s codename – CF1250G – appears to confirm the capacity as 1250cc.

It’s hard to guess how much power the new bike might make. KTM’s version of the V-twin is good for as much as 175bhp but the Chinese version is likely to err towards a more modest output. Even so, there’s every reason to believe this will be the most powerful Chinese-made motorcycle yet. 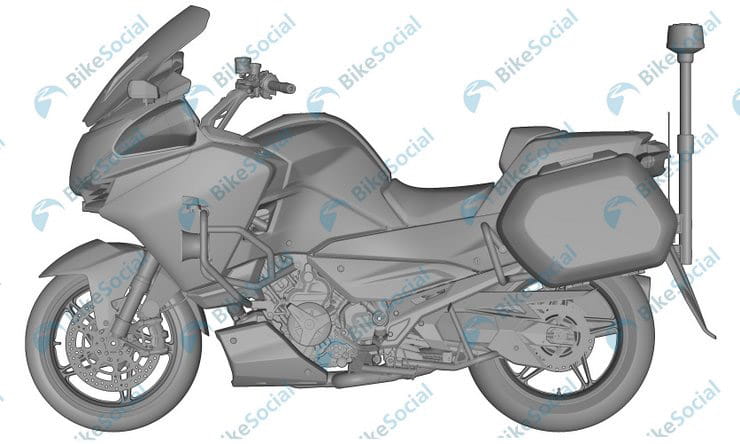 The all-enveloping bodywork – likely to be the work of KTM’s favoured Kiska design group, which has also styled the latest generation of CFMoto machines – hides most of the new bike’s chassis from view. However, the glimpse that can be seen at the swingarm pivot suggests a tubular steel chassis.

In fact, that section is remarkably similar to the same part on KTM’s 1290 Super Adventure. It’s the same story with the front suspension, which appears to use WP forks similar to those featured on several KTMs.

We shouldn’t believe the bike is simply a KTM in drag, though. We already know the engine is significantly changed from its original roots and while there will be inevitably similarities thanks to the two firms’ connections, there are elements of this design that are unlike any KTM. The swingarm, for instance, is a new cast aluminium design that’s nothing like the externally-braced designs used by the Austrian firm. 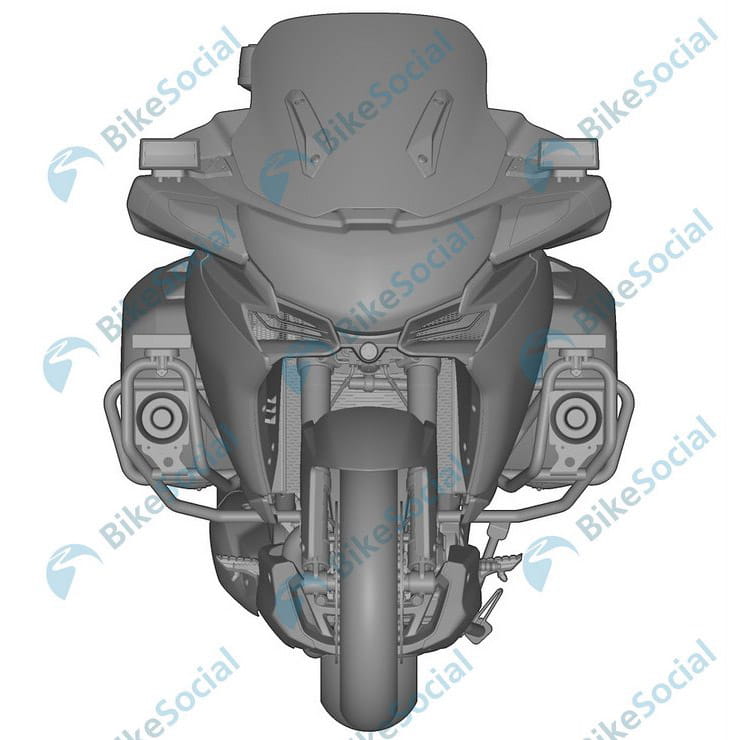 Twin air intakes in the bike’s nose suggest there’s a ram-air system to boost power at speed, but more intriguing is what appears to be a small, round sensor mounted between them.

There’s a similar component on the rear, just above the registration plate bracket. These look much like the ultrasonic parking sensors used on most modern cars, but it’s hard to see how such parts would be of use on a motorcycle. It’s also possible they could be camera or radar sensors, but whichever technology they’re using the logical conclusion is that this bike could have some sort of adaptive cruise control and blind-spot sensor arrangement.

Technology is sure to be a big element of the bike. We can’t see the instruments clearly – a police-spec unit mounted on the bars blocks our view – but it looks like there could be three separate flat-screen displays. There’s clearly a huge array of buttons on the left hand bar controls. An electric screen is clear to see, but CFMoto doesn’t appear to have opted for any trickery like semi-auto transmissions or electronically-adjustable suspension. There are three-pointed adjusters on top of the forks for damping tweaks and a conventional clutch and gearshift clearly on display. 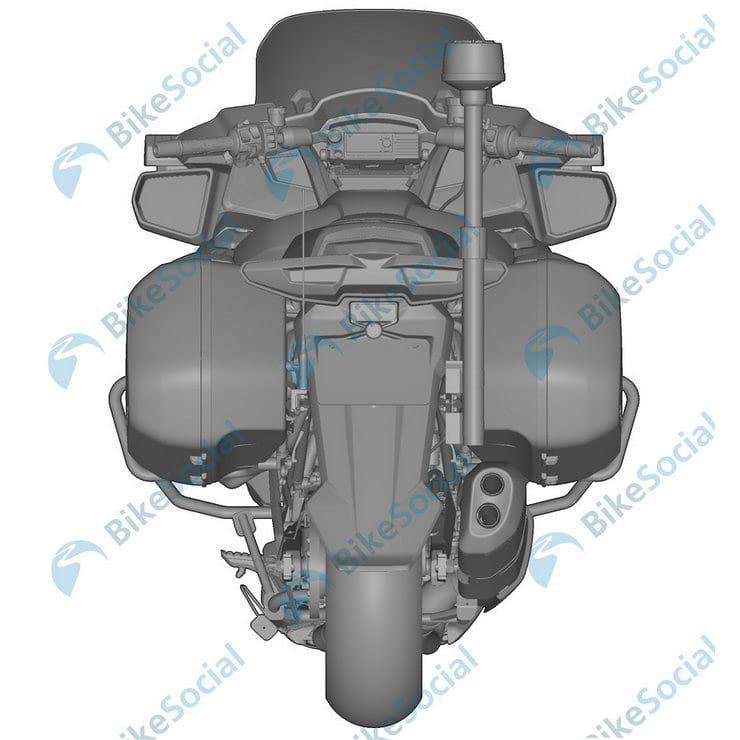 One big downside of this design compared to obvious rivals like BMW’s R1250RT is the use of a chain final drive rather than a shaft. Serious long-distance tourer owners are understandably keen on the maintenance-free nature of shaft drives, but the fact that CFMoto isn’t using one might actually be a blessing for a wider group of potential customers.

Why? Because you only have to look at CFMoto’s current range of 650cc V-twins to see that the company likes to use the same engine in a variety of different styles of bike. Its naked 650NK, adventure-style 650MT and sports-touring 650GT illustrate that platform-sharing concept and the same idea will inevitably be followed for with the new 1250. So while the big tourer might be the first to appear – thanks to the tempting carrot of a juicy government supply deal – CFMoto is sure to have ideas for other derivatives that are likely to be more popular with customers. A naked sports bike, inspired by the V.02NK concept (below), seems certain and it’s hard to imagine any company with access to a 1250cc V-twin engine not using it as the basis of an adventure bike as well.

All this comes alongside other planned developments at CFMoto including a new 700cc neo-retro roadster that’s expected to appear at shows towards the end of this year. 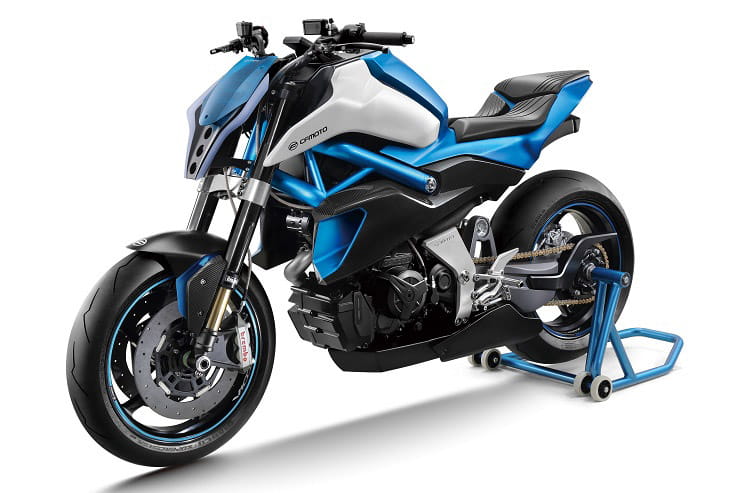