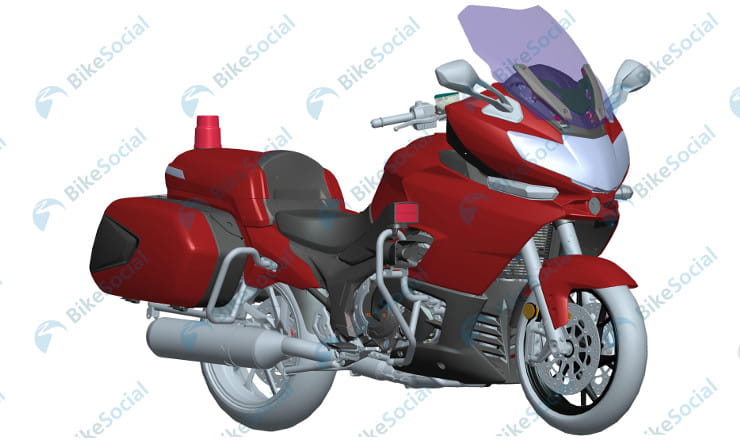 This is the first glimpse of the next-generation 1200cc Benelli three-cylinder bike platform that’s part of the firm’s plan for a range that extends all the way from 125s to a huge 1800cc cruiser.

Yes, these design drawings show the bike in police-spec and carrying the name ‘QJiang’ – the brand of Benelli’s parent firm Qianjiang – but bike is expected to appear under the Benelli name in the European market.

It’s not unusual for Chinese firms to offer the best and brightest of their new models to the country’s police before civilian production models are built. We’ve seen the same pattern with CFMoto’s 650TK tourer, which appeared in police form at least a year before the civvy version broke cover. QJiang has also made a cop-spec tourer based on the Benelli BN600 four-cylinder platform in the past – it was later given less ungainly bodywork to become the Benelli BN600GTS production bike.

The larger bike you see here is currently under development under the codename QJ1200GS. It’s understood to use a 1200cc three-cylinder engine that’s vaguely related to the existing 1130cc triple used in the TNT 1130R, but it’s been hugely reworked to incorporate a shaft-drive transmission and a larger capacity.

Given that the current 1130 engine makes a claimed 158hp, there’s reason to hope that the larger 1200cc unit will be just as potent, potentially giving the new Benelli enough performance to vie with rivals like BMW’s K1600GT. 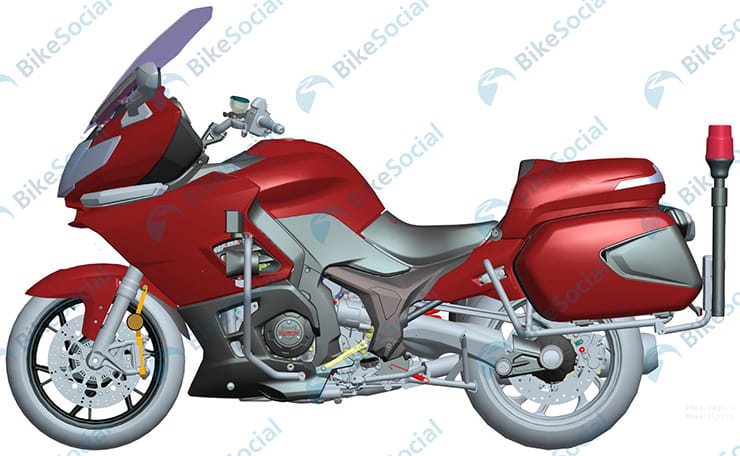 While the police-spec bike seen here suggests that the first application of the new engine will be in a touring bike, it’s likely that the firm has plans to use the same powertrain in a whole range of machines. A tourer – looking much like these drawings but without the single-seat tail and built-in top box – is likely to be followed by a large adventure bike using the same mechanical parts.

While the idea of a 1200cc three-cylinder Benelli might conjure ideas of an up-to-date superbike to replace the old Tornado Tre, it’s unlikely that such a machine is currently part of Benelli’s plan. It engine, which traces its heritage back to the late-90s relaunch of the brand with the original 900cc Tornado, is relatively large and heavy and developing a superbike-style motor able to compete with the best from Japan and its Italian rivals would be an expensive undertaking. With adventure bikes and naked machines massively outselling superbikes, the development of such a model doesn’t make a lot of financial sense.

Instead the firm’s plans are understood to include a new 750cc twin, rivalling the Ducati Monster and based on an engine that was developed for the stillborn Due 756 back in the mid-00s. It’s also working on a new 900cc three-cylinder naked model, using a derivative of the existing triple and likely to take the place of the TNT.

Finally, it’s understood that Benelli’s Chinese parent firm has also prototyped an 1800cc V-twin cruiser – surely the largest-capacity bike yet made in China – although it’s still undecided whether it will pursue the idea further.
Recommended Articles