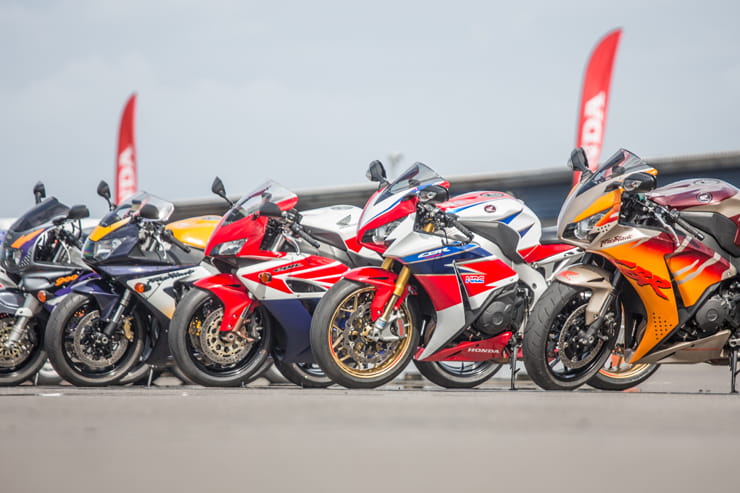 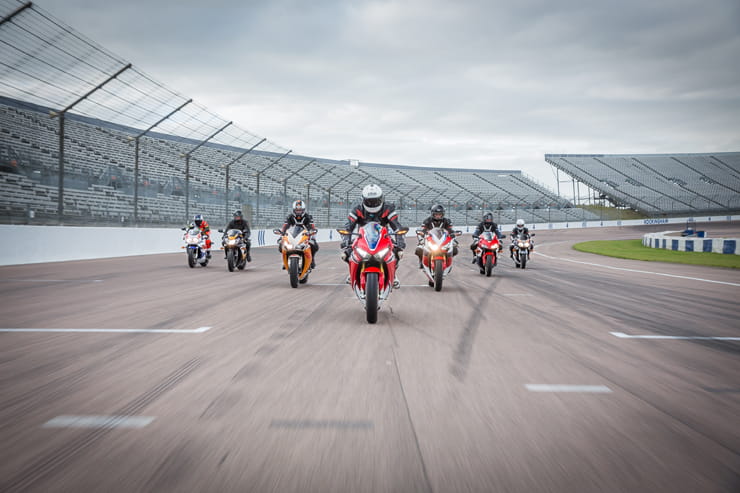 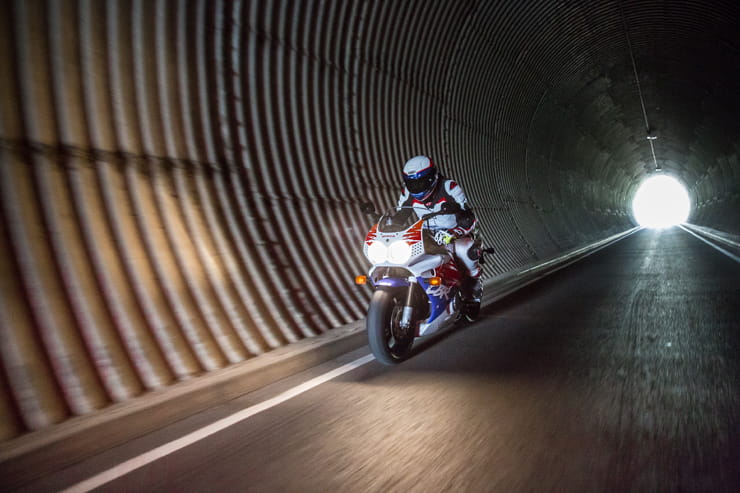 In 25 years of Honda Fireblades (the capital B was dropped in 2004 when its originator Tadao Baba retired) engine capacity has gone from 893cc to 999cc, power has risen dramatically from 110bhp at the back wheel (early Blades were built to loose tolerances meaning power outputs varied significantly) to around 180bhp, and the already light weight has dropped by an additional 10kg.

It's not often you get chance to have a proper ride on several generations of a bike in one day so when Honda offered us their heritage Fireblade family, BikeSocial (maybe we should drop the capital S when founder member Michael retires in 2054) jumped at the chance. 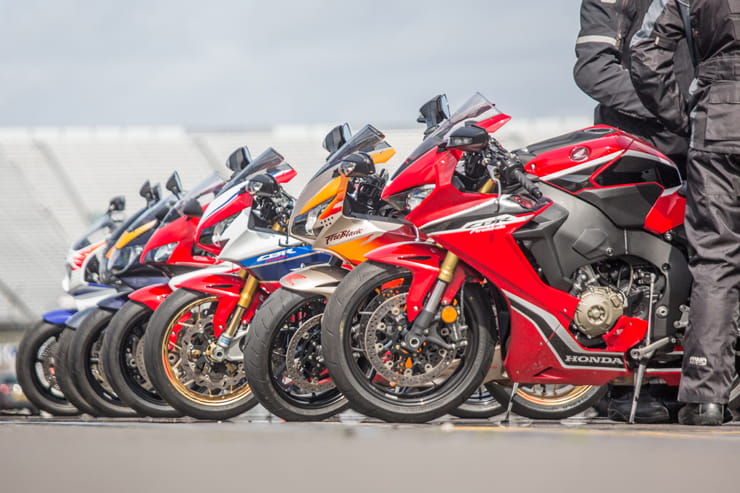 To be a Blade, a bike has to be something special. More than just a name, there's a clinical, mischievous DNA that runs through all of them including, very much, the latest 2017 bike.

Small, light, easy to use. Rarely the fastest, but often the quickest. Nothing is there that doesn't need to be and, until this year, the Fireblade was last of the superbikes to resist the electronic interference. More than that, each generation has that one 'special thing' that made them memorable. What follows isn’t the ‘ultimate buying guide’ (because ultimate means final and there will always be another Fireblade feature to write) or even a proper road test. It’s the essence of each significant Fireblade distilled from a few daft miles saying ‘howdy’ to some old friends. 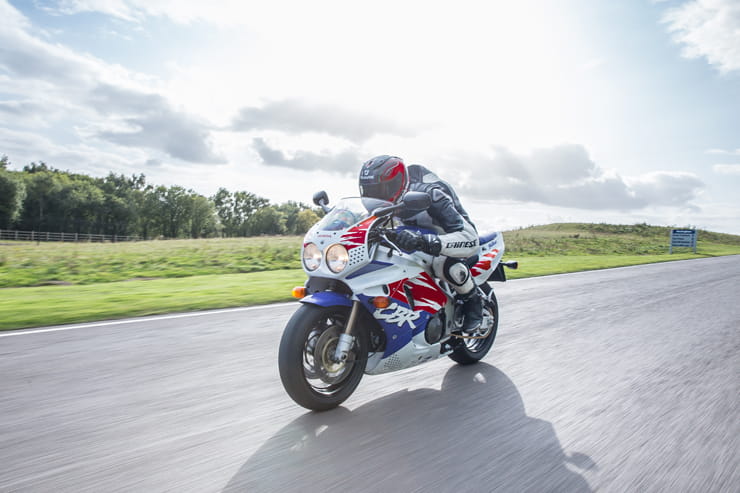 The perforated fairing (helps high speed turning) and high profile 16in tyre (same rolling radius as a 17in wheel with low profile rubber, but lighter) poke your nostalgia glands, as does the Morris Minor choke lever and minimal instrumentation. Love it.

This 1992 Blade is not the most perfect example. The brakes need a service, finish on the engine and swing arm has seen better days and the speedo cable just stopped working as we hit, er… let’s not bother with details, chasing a pack of eight journos, all on later Blades, around Leicestershire.

Thankfully, there’s nothing wrong with the engine It runs sweetly, picking up and pulling like only a carb-fed sports bike can. Chasing the others it runs out of revs quickly, grinning rider hanging onto the bars while sliding up and down the wide, comfy seat. No one knows why Honda chose a seat material that so enthusiastically encouraged todger-to-tank contact, but ten minutes in it doesn't matter because keeping up with the children is scary enough that my boy-buds are tucked somewhere round my tonsils.

Steering is light, suspension is capable and the riding position makes you feel just about in control of a 25 year old motorcycle exploring many different lines through the A47’s faster corners. The gearbox on this one is good - not all were - clutch is light and there's room behind the screen to fit me, a small dog and hang some washing on the enormous fairing stay (plus of course, room to keep your clothes pegs, ironing board and half the Beatles in the Cavern under the pillion seat).

Brakes, who needs them?

After all this time, the 1992 Blade still feels like the best 600 no one ever built. Prices are on the up which is a shame because, as a classic, the bike doesn’t quite cut it yet, but these days everyone wants to hide them, not ride them. 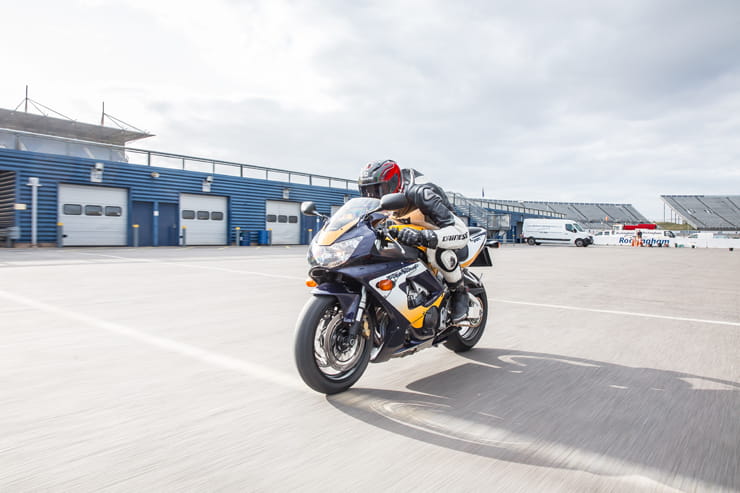 Fuel-injected, 40 per cent more power than the original sharper handling, upside down forks and a 17-inch front wheel made the all-new Blade as high-tech and funky as sports bikes got in early 2000. Much easier to ride fast than the HRC-stickered VTR1000SP-1 launched at the same time, but not as pretty and destined to live in the shadows because, truthfully, Yamaha’s YZF-R1 was still the better bike.

Seventeen years on, this Blade still feels like a modern bike, mostly because it still makes more power than we can use, still weighs less than current sports bikes and handles and brakes well enough to keep up. Mounting the swing-arm directly to the engine casings caused problems on some bikes when dropped, but the one you buy will have been fixed a long time ago. The RR-Y was good, but not special. Lighter, faster, sharper than before, but still comfy, with a narrower (and less slippy) seat and still enough room under the seat for an average UK tortoise. The fuel injection doesn't feel as snatchy or clumsy as it did then, maybe we've got used to it.

Some people think the 954cc 2002/03 Blades were the best of the bunch. Ignore them, they're wrong, but for the money (ignore any asking price north of £3000, they sell for about £500 less typically) they still make a good secondhand buy. 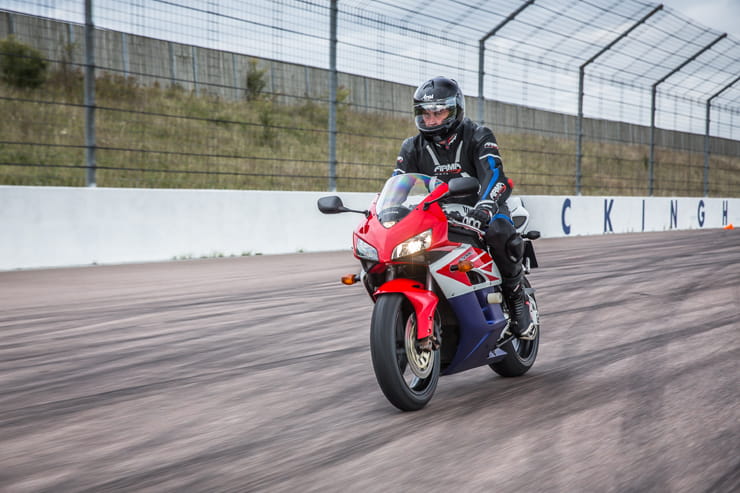 Baba retired in 2003 and the all-new 2004 bike is very different. Supposedly based on Rossi's V5 Moto GP bike all the talk was of mass-centralisation - concentrating the bulk (15kg more than the outgoing 954cc model) low and central to improve handling. Trickest of all was the new rear shock arrangement mounted as part of the swing arm. No one explained where the enormous silencer sticking out from under the seat fits into this centralised theory or that Yamaha's V-Max was possibly the most mass centralised bike in history and is still waiting for its first GP victory. No one explained why the clocks were shaped like something on your gran's mantelpiece either.

It doesn't matter. This is the Blade I'd buy with my money because it's by far and away the most bike for the least money right now. 172bhp and 194kg wet are impressive numbers even 13 years on. These 04/05 bikes can be had for less than £3000 if you're patient and ignore asking prices. There's an awful lot of performance, comfort and handling for the money. Fast, crisp, efficient, planted and secure, with that nimble feeling on its wheels controlled by a weird electronic steering damper.

Not so much practicality though. Without legendary chainsmoker Baba's requirement for tobacco, matches and a fold-up smoking cubicle, Honda’s designers ditched the underseat storage.

Early bikes were recalled for replacement clocks, meaning it’s possible that some mileages might not be completely accurate. Other than that, the ‘Rossi’ Fireblade is the best mix of performance per pound right now. 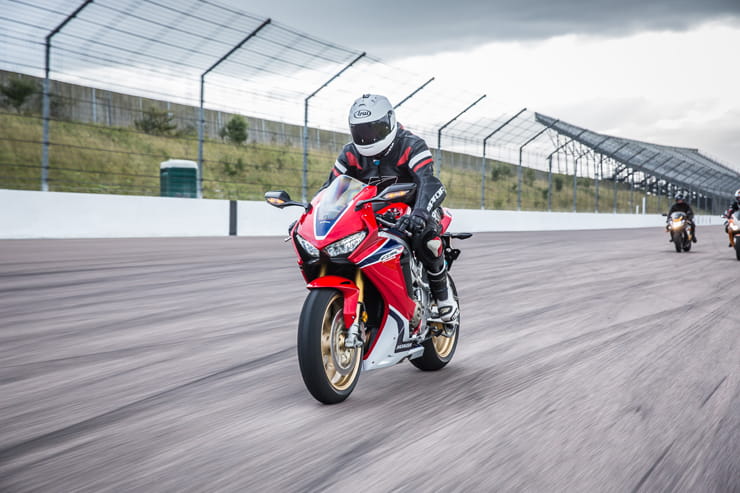 Britain’s best-selling sports bike in 2017, by some margin, I’d done a lot of miles on the (even more expensive) SP version but this was the first time I’d ridden the standard one.

Losing the quickshifter and electronic Öhlins suspension doesn’t make a massive difference on the road. All the subtle development in power delivery, ergonomics, weight saving and conventional suspension make this a very good bike indeed.

It feels tiny, but still comfortable and controllable, with consistent, predictable fuelling (others might say different, but I can only report on the bike I rode).

I’m nosey, curious and looking hard for alleged problems that simply don’t appear. The gearbox works fine, the throttle response is consistent; it goes fast, it goes slow and it does all this without  fuss. I haven’t ridden the latest GSX-R, which others tell me is better. That might be so, but the Suzuki looks like a 1988 GSX600F with a factory spray job to me and, forgive me, but that matters. 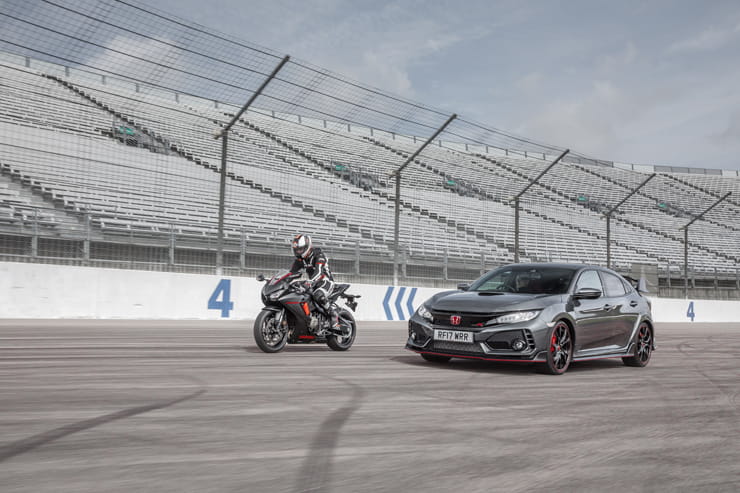 Let’s play a game. Go outside and run 100 metres as fast as you can. Now, find a rucksack, fill it with bricks and run the 100 metres again. Notice anything?

Cutting weight on a motorcycle (or a bicycle for that matter) gives a performance benefit from the moment you apply the power or the brakes or try to steer into a turn. The 1992 FireBlade’s rivals all made considerably more power than the Honda, but only at the top end of the rev range. They also weighed up to 47kg more (yes, really, the 1992 GSX-R1100 weighed 47kg more than the FireBlade) and at the time none of us really thought much about it.

Honda had primed us for this five years before when they launched the VFR750R RC30. As smartass 25 year olds we looked at the RC’s spec sheet and wondered how they had the cheek to charge so much money for a bike making no more power than the standard VFR750.

No one really thought about how much faster the RC would be for weighing a whopping 20kg less, or how much more easily it would steer and brake and change direction. The FireBlade taught us a lesson.

What would you rather have; better acceleration, quicker steering and less input to handle sharper or 20bhp more that you’ll never use?

It took Honda’s rivals six years to catch up starting a golden age of lightweight sports bikes, engine up with the 2003 FireBlade that weighed a skinny 168kg dry; a fat Jack Russell lighter than the 1992 original.

Like many milestones before and since, the original FireBlade took tyres manufacturers by surprise. Honda chose a high profile, 16in front radial and Bridgestone supplied an OE BT50 fitment, which was the only thing available for most of 1992. Remember that radial tyres were still relatively new in 1992 and the FireBlade’s short wheelbase, light weight and sharp steering geometry were a combination never seen on a 110bhp superbike before. Owners and journalists loved the handling, but noted how prone the bike was to dropping into turns and oversteer. As tyre technology got better and more manufacturers made a 16in front, the handling issues largely disappeared and, from 2000-onwards the Blade got a 17in front wheel, just as all the tyre manufacturers had tooled up to make a 16incher.

Ride an early Blade on modern tyres and you’ll be surprised just how stable and sharp-steering it still is. I know, I just did.