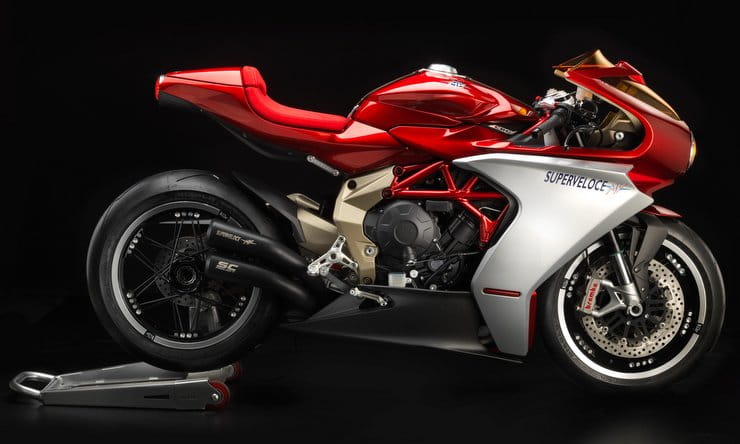 MV Agusta reconfirmed its plans to make a production version of the Superveloce concept bike last week and now we’ve got a price, delivery dates and specifications for the first, limited-edition ‘Serie Oro’ version.

Ever since the unveiling of the MV Agusta F4 in 1997 it’s been a tradition for the firm to begin production with a limited run ‘Serie Oro’ machine, using high-spec components and materials and with a premium price, before a cheaper, more mass-made version goes on sale. It’s a clever way to maximise income and recoup development costs while slowly ramping up production and ironing out any unexpected problems, and with Serie Oro machines traditionally holding their value well, buyers don’t tend to lose out either.

When it comes to specs, the Serie Oro version of the Superveloce – based heavily on the chassis and engine of the existing F3 800 – doesn’t hold many surprises. Power is pegged at 148hp at 13,000rpm from the 748cc triple, while dry weight is claimed to be 173kg. Those numbers are identical to the figures given for the F3 800.

At the moment, MV’s pictures still show the prototype that appeared at EICMA last year, so we’re still waiting to see how road-going details like mirrors, indicators and a number plate will be integrated into the styling. It’s also not clear whether the Serie Oro will get improved components compared to the show bike, which used stock F3 800 forks and brakes.

Timur Sardarov, CEO of MV Agusta, said: “This is one of the meanest and most stylish bikes we’ve ever produced. It certainly lives up to MV Agusta’s heritage of craftsmanship, design and technology. From the moment it went on display at EICMA last November, we knew we had an instant classic.”

Pre-orders for the bike can be place online here: www.mvagusta.com/superveloce-800-serie-oro