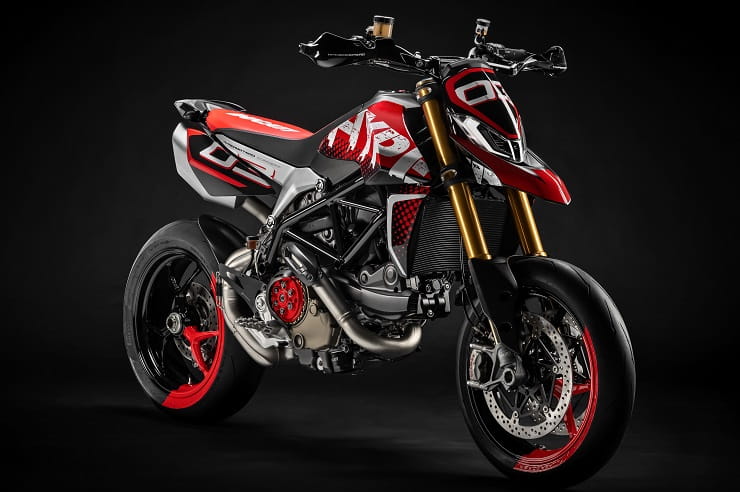 Ducati revealed this concept version of the new Hypermotard 950 won its class at the Villa d’Este concours at the weekend – and its graphics could one day make the leap to a production version of the bike.

The bike was prepared for the prestigious event at Lake Como in Italy, and where most concept bikes aim to preview new styling or technology this one intends to illustrate a different direction that Ducati could take with its graphics.

Since the Hypermotard 950 is a new model for 2019, it’s hard to imagine Ducati making any serious changes to its specifications or design for another couple of years. But that doesn’t mean the firm can’t get creative with its paintwork.

While we’re used to seeing garish, multi-coloured machines from other manufacturers, Ducati rarely strays from simple, timeless schemes. As such, this Hypermotard’s style – with dual-coloured wheels, complex paintwork and plenty of stick-on graphics is a notable departure from the norm.

It might offend some traditional Ducatisti, but if the in-yer-face style attracts buyers that wouldn’t normally consider a Duc, then it’s done its job.

The concept also features a few other additions to stand apart from the normal Hypermotard. A slim all-LED headlight sits below a restyled, number-board style wind deflector and above a new ‘beak’ that lacks the usual twin nostrils of the stock Hypermotard. The exhaust is a tweaked design, while a red-painted dry clutch is a less subtle change from standard.

Andrea Ferraresi, director of Centro Stile Ducati, confirmed that the bike has been well-received on social media, boosting the chance that it could influence future production models, saying: “Style concepts are useful also for presenting new elements, in this case the graphic design in particular, and for evaluating the reactions they inspire. We're extremely pleased with the success it's inspired on the social networks. Given the importance and attention that we dedicate to style, one of the basic values of our company, receiving awards on occasions such as this one always makes us extremely proud.”

MV Agusta’s Superveloce also took a win in the concept bike class at the Villa d’Este concours, just days after the company confirmed it’s heading for production in 2020.