Triumph Daytona 765 prototype spotted but will it make production? 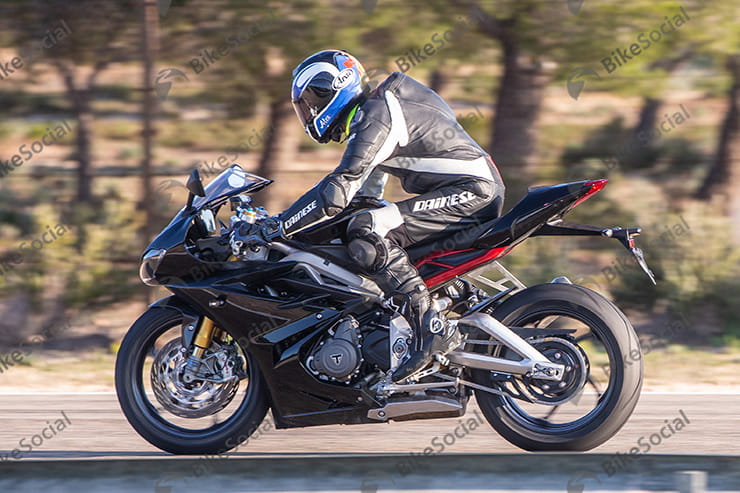 Ever since Triumph rose from the ashes under the stewardship of John Bloor there’s been a Daytona-badged sports bike in the range. Not anymore. The highly-regarded Daytona 675 shuffled out of the line-up without so much as a nod of thanks in 2018 after a dozen years as the company’s sportiest offering.

Not that we can blame Triumph for that. The introduction of Euro 4 emissions restrictions meant that the Daytona needed investment to remain on sale, and there just weren’t enough new customers coming forward to justify that investment. The fashion is for naked roadsters, retros and adventure bikes – all areas where Triumph is thriving – so the business case for a new Daytona clearly hasn’t been an easy one to make.

And yet, despite all that, here are spy shots of Triumph testing a Daytona equipped with the new, Euro 4-compliant 765cc engine from the latest Street Triple. It looks like the firm’s days as a sports bike manufacturer may not be behind it after all.

It might be easy to jump to the conclusion that, because this prototype exists, a new production Daytona is just around the corner – you’re sure to read headlines to that effect elsewhere – but this prototype isn’t likely to be representative of a future production bike.

Let’s look at what we’ve got here. The frame, subframe, swingarm, forks, shock, bodywork and wheels are all borrowed straight from the old Daytona 675R – the new element is the engine, which appears to be directly from the Street Triple 765. The instruments also come from that bike, which should be no surprise as it’s going to be far easier to use the whole Street Triple wiring loom than to integrate the new engine with the old Daytona’s clocks.

In fact the least familiar thing here is an exhaust system which appears to have a larger collector under the engine that the old Daytona, and which exits via a megaphone-style end can that’s similar to the design that featured on Triumph’s Moto2 prototype last year 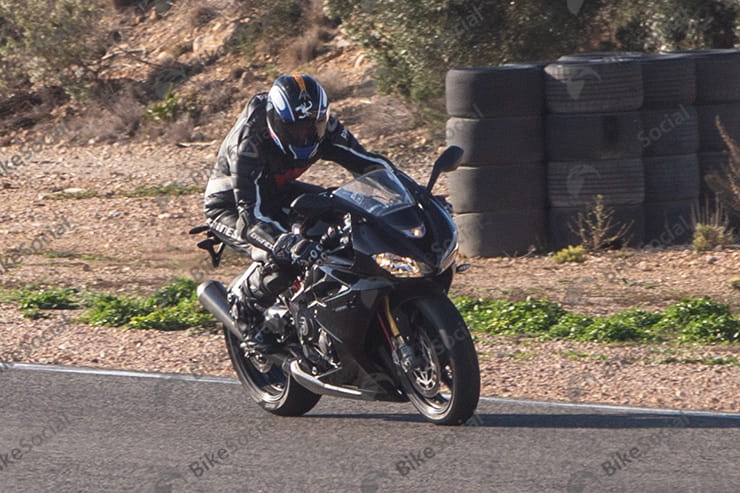 So what are we looking at here? It’s unimaginable that Triumph will relaunch the Daytona around the new 765cc engine without simultaneously revamping the bodywork. This style went on sale way back in 2013, and was the third design used since the Daytona 675 first hit the market in 2006. There’s no way that a new production bike that hits showrooms in 2020 or later is going to be offered with styling that old, and that lacks modern elements like all-LED lighting.

It’s also hard to imagine that, having created a completely new chassis for the Street Triple 765, Triumph will haul out its old Daytona frame if it brings a new 765cc supersports bike to the market.

No, the smart money says that this prototype is a proof of concept rather than a pre-production machine. By slapping the Street Triple 765 engine into an existing Daytona 675RS chassis, Triumph can get an instant impression of how well the idea works as a road-going sports bike. If it’s deemed a winner, and Triumph can be convinced that there are enough buyers out there, the long process of tweaking and improving the design can get underway. The existence of this bike isn’t evidence that a new Daytona 765 is imminent, but it shows that the idea of a Daytona 765 is still alive and well within Triumph’s product planning and engineering departments.

That makes sense. Triumph has recently reaffirmed its grip on the ‘Daytona’ model name by renewing its trademark rights, and the firm will be well aware that while adventure bikes and retros are hot sellers at the moment, the market could easily swing back towards favouring sports bikes in the future.  What’s more, with a huge international platform to demonstrate the ability of its 765cc triple over the next three years as the sole engine supplier to the Moto2 series, interest in a Daytona powered by that engine is sure to rise during that time. It’s wise to be ready to respond to that.

However, we’ve seen plenty of Triumph prototypes that come to naught. Remember the Daytona 250 single that the firm officially announced back in November 2013? And the Street Single that was to be spun off the same platform? Both bikes were spied testing but got cancelled before production could start. Or, going back a few more years, how about the near-mythical 1300cc four-cylinder Hayabusa rival that was spied back in the early 2000s? And they’re just the tip of the iceberg; Triumph, like any manufacturer, has to test ideas before committing to them and even after making significant investment into developing bikes it’s ready to change its plans when circumstances dictate.

Can we guarantee that there’s a new Daytona coming? On the back of these spy shots alone, no, we still can’t be certain. But it’s more likely than it was before they emerged. 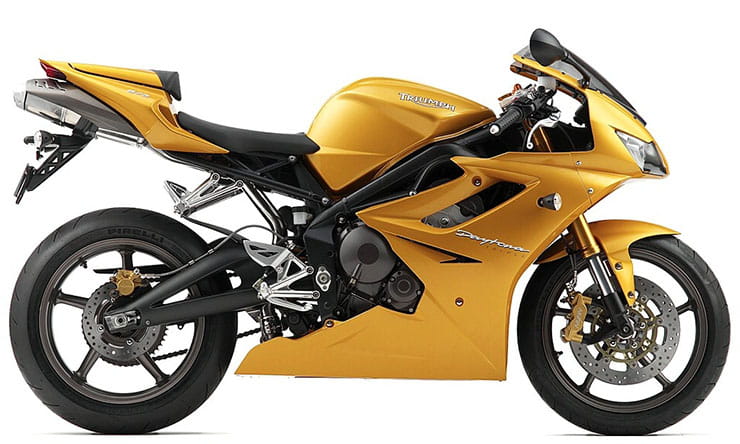 The name ‘Daytona’ can be traced back to Triumph’s Meriden years, when it appeared on the Daytona 500 and on the Tiger Daytona as a tribute to Buddy Elmore’s win at the 1966 Daytona 200. But it was really after the firm was reborn under John Bloor and set up in its Hinckley location that the name became vital to the firm.

Although Bloor bought Triumph in 1983, such was the task of developing a completely new model range that it was 1991 before first Hinckley Triumphs hit dealers. And when they did, a Daytona was among them.

In 1997, the Daytona T595 hit dealers and massively boosted Triumph’s profile thanks to Ducati 916-inspired styling and a single-sided swingarm, not to mention the first alloy frame for the firm. It later evolved into the Daytona 955i, and would remain in production until 2006.

Meanwhile, Triumph also made the brave decision to break into the 600cc supersports market that, during the late 1990s, was dominant in the UK. Its initial attempt was the four-cylinder TT600, hitting dealers in 2000, but after a rocky start that bike was restyled and retuned to become the much more aggressive Daytona 600, launched in 2002.

While it was a great improvement, the four-cylinder Daytona 600 struggled to match the fast-improving Japanese competition, and even a one-year-only capacity boost to 646cc in 2005 couldn’t bring it to terms with bikes like Honda’s CBR600RR. But in 2006 Triumph pulled a blinder with the introduction of the Daytona 675.

Suddenly, here was a Daytona that didn’t play catch-up to the Japanese. Taking the left-field route of using a 675cc three-cylinder engine meant it could match the Japanese fours for power while offering far more midrange torque, while a new cast frame meant its chassis was also more than up to the job. Such was the essential rightness of the Daytona that it lived on, with updates rather than out-and-out replacement, right until the last of them were sold in 2018. What’s more, the massively successful Street Triple was spun off from the same chassis and engine. Triumph owes the Daytona 675 a debt of gratitude, and hopefully the significance of the bike in the firm’s history will help seal the deal for a replacement to be given the green light sooner rather than later.