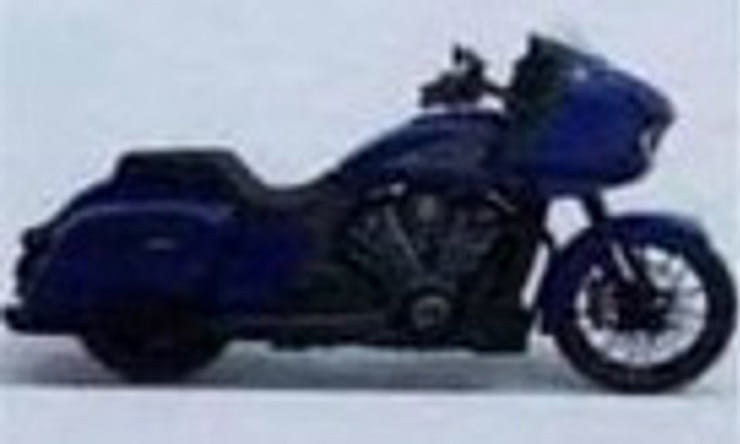 A little while ago we showed you the designs for Indian’s forthcoming large-capacity water-cooled V-twin engine and now an internal document has emerged on the internet that shows the whole bike, albeit in very low resolution.

The same document also confirms the new model’s name to be ‘Raptor’, which fits in neatly with other recently-trademarked names from the firm that include ‘Renegade’ and ‘Raven’, as well as a stylised ‘R’ logo. Eventually the new water-cooled big twin will inevitably power a whole range of machines, perhaps bearing those names.

In terms of technical details, we’ve already seen that the new engine features a single overhead camshaft, ditching the pushrods of the air-cooled Indian Thunder Stroke 111. We also speculated that the new engine would be around the same capacity as the 1811cc Thunder Stroke. As it turns out, we were close – the actual capacity of the new motor is 1770cc (108cu in) – and it’s planned to make 120hp. That’s a large increase compared to the Thunder Stroke, which achieves around 90hp at the crankshaft.

The document confirms that the Raptor is coming as part of the 2020 model range, which means it’s going to be launched fairly soon. Our bet is that Indian will wheel it out for the first time at the huge Sturgis bike rally in August, with production starting in the same month. The document states “SOP August 2019” – presumably meaning ‘schedule/start of production’.

The motor is connected to a six-speed transmission, and the image confirms that the Raptor is a bagger very much in the image of Harley-Davidson’s Road Glide, with a fixed half fairing, short screen, forward-slanting headlight and large-diameter, spindly front wheel. A full-dress tourer, with a top box, tall screen and armchair-style pillion seat has got to be on the cards, too, mimicking the Road Glide Ultra. The entire range of bikes using the large, water-cooled engine is currently going under the codename ‘Legend’ inside Indian.

The document also confirms that Indian’s 2020 range will include another derivative of the FTR1200 (which went under the internal name ‘Apollo Tracker’). The new model, codenamed ‘Apollo Street’, isn’t shown, but it will use the same 120hp, 1203cc V-twin as the FTR1200, and it seems likely that it will get a fairing. In 2021, it will be joined by an adventure bike derivative (Apollo Adventure), again with the same main components. That will put Indian directly up against Harley-Davidson’s upcoming water-cooled Pan America adventure bike. 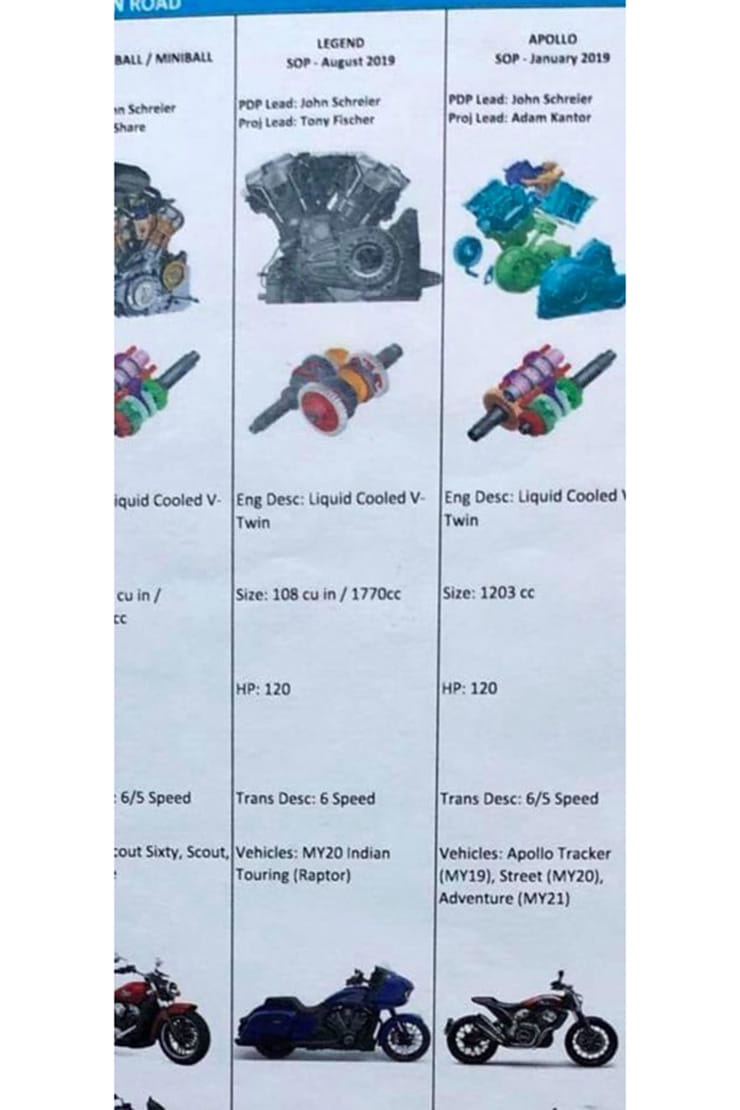