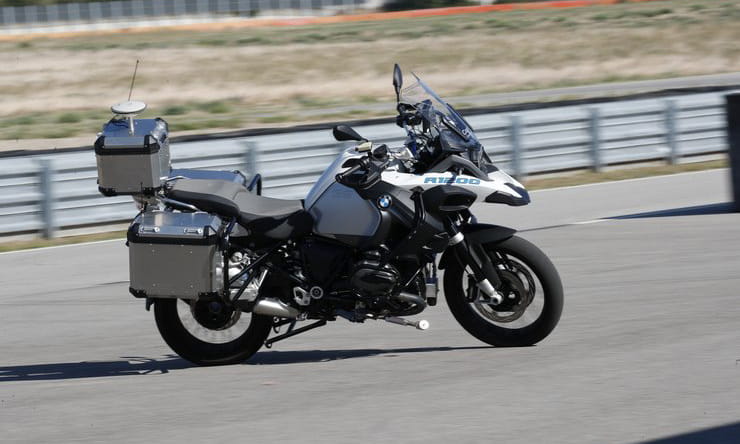 Self-riding bikes, eh? On the face of it the idea is slightly ridiculous. Self-driving cars are easy to understand – they’re just transport – but a motorcycle is all about the journey, not the destination. So why bother?

The reason, really, isn’t to create a ‘self-riding bike’ at all. It’s to build a set of rider-assist systems so advanced that, if it’s absolutely necessary, the computer can take over and steer you out of whatever trouble you’ve got yourself into. And in that light, they make a lot of sense. We’ve already seen Yamaha’s Motobot and Honda’s Riding Assist concepts – both forms of autonomous bike – and now BMW is in on the action with a prototype self-riding R1200GS.

The firm explains its thinking thus: BMW Motorrad, as a driver for technical innovations in the field of motorcycling, is by no means aiming for a completely independent motorbike. Rather, the underlying technology should serve as a platform for development of future systems and functions to make motorcycling even safer, more comfortable and increase the riding pleasure. The aim of the prototype is to gather additional knowledge with regards driving dynamics in order to detect dangerous situations early on and thus support the driver with appropriate safety systems while turning at intersections or when braking suddenly, for example.

See it in action here 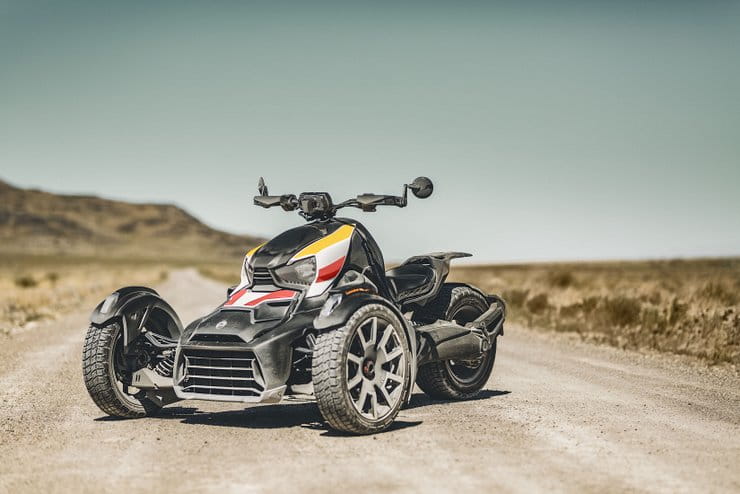 Can-Am’s three-wheeled Spyder models have always been intriguing but slightly irrelevant machines. Lacking the leaning suspension of something like Yamaha’s NIKEN, they sit in a no-man’s-land between motorcycles and cars.

That’s not to say they’re not fun, but making that alone a justification for their relatively high prices – in the UK they start at £16,899 and rise to beyond £25,000 – isn’t easy.

Now the firm has launched a completely new, entry-level three-wheeler, the Ryken, which addresses that problem with a starting price of just £8699.

At that price, it’s a completely different proposition, and it’s easy to imagine that we might start seeing a few more of these things on the street.

Unlike the 1330cc, three-cylinder, 115hp Spyder models, the Ryken comes with either a 47hp, 600cc Rotax twin or a 77hp, 900cc Rotax triple. Sure, that’s less power, but the Ryken is also much lighter than the Spyder, so performance shouldn’t be too far behind.

What’s more, the Ryken gets a single-sided swingarm with shaft drive instead of a belt or chain, making it easier to maintain, and instead of a semi-automatic transmission like the Spyder it gets a CVT twist-and-go gearbox. That means there are just three controls: bars for steering, a throttle to make it go and a brake – operated by your right foot – to make it stop again. Easy.

The bars and pegs can be moved without recourse to tools, too, allowing the riding position to be tailored to your preference. And for a little more cash there’s a ‘Rally’ version with the bigger 900cc engine, long-travel suspension and deeper-tread tyres plus a special riding mode to encourage tail-out action. Away from the public highway, of course… 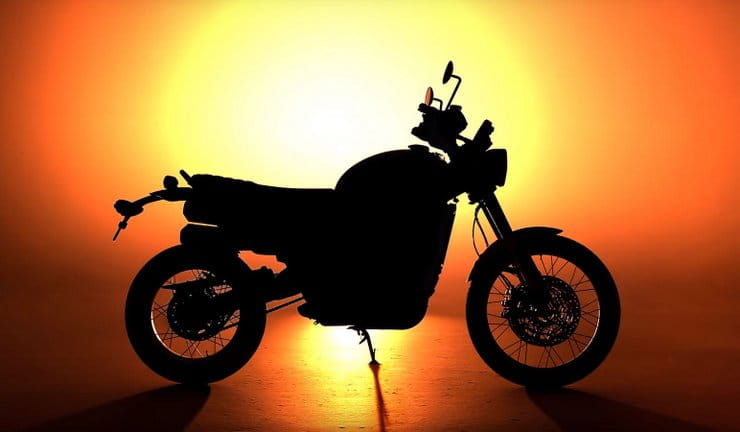 We’ve seen the spy shots and the first teaser video, and now Triumph has revealed a little more of its upcoming Scrambler 1200 in a second preview vid.

This time, we actually get to see the bike, at least in parts and with the usual teaser-video tropes of short close-ups, weird lighting and flashes of light.

What does it tell us? Well, we get to see the headlight (round, nicely detailed), the exhausts (two stacked pipes on the right-hand side, as you’d expect from a Triumph Scrambler), the front forks (Ohlins, by the look of it), a bash guard, and a side-on silhouette of the whole bike.

During the video, Triumph tells us the following:

So it’s still more than a month before we’ll get to see the whole thing. And that means there’s time for more teaser videos. Let’s hope we’re not all bored of it before the full unveiling. See the latest video here 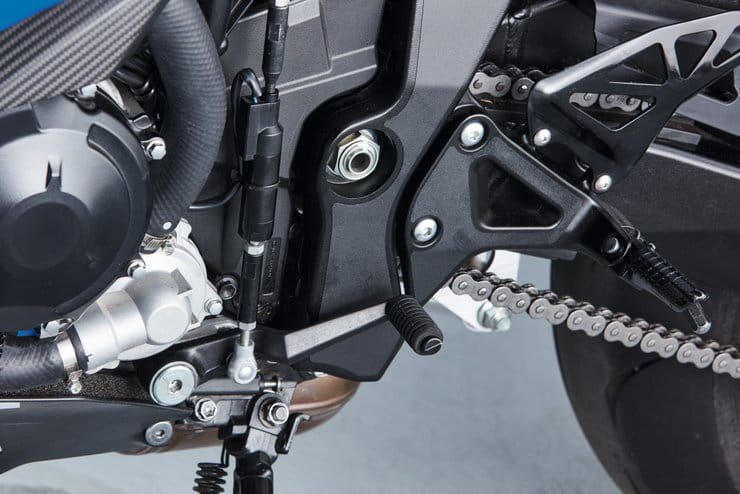 Quickshifters are fast becoming expected equipment on superbike-class machines and while Suzuki’s high-end GSX-R1000R has just such a device it’s been lacking on the cheaper, non-R version of the GSX-R1000.

Now the firm has announced an official kit to retrofit the quickshifter – which works both up and down through the gears and auto-blips the throttle on downshifts – to the GSX-R1000.

It’s not cheap at £490, but for your cash you get a system with two sensitivity settings, altering the amount of pressure needed on the gear lever to trigger the system, and the ability to switch it off entirely and go back to a conventional shift.

Suzuki is offering the kit as an option on new GSX-R1000s and as a retrofit to existing bikes, available through all authorised Suzuki dealers. 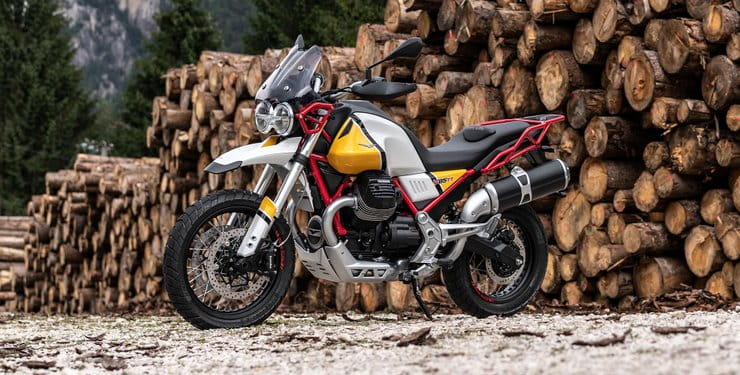 Moto Guzzi has revealed the production version of the V85TT – the bike it previewed with the V85 Concept a year ago.

Of course, we’ve already shown you what the production model will look like; we had the patent drawings for the bike back in June, but in full colour it looks even more like the original concept version.

In fact, you’ll be hard-pushed to spot the changes. There’s a small tweak to the fork bottoms and the Brembo calipers held there are black rather than unpainted as on the concept. Higher up, the screen is more heavily sculpted than last year’s show bike’s, and the metal rails holding the headlights in place are redesigned.

Underneath there’s a catalytic converter that the Concept didn’t have, and at the back there’s the inevitable bigger exhaust can needed to keep the noise down. But overall, if you liked the look of the V85 Concept last year, you’ll like the V85TT production bike as well.

The white and yellow paint allied to a red frame, all harking back to Guzzi’s 1980s Dakar bikes, stays, albeit with a slightly different design.

Mechanically, it’s just what Guzzi promised last year, with an 80hp, 850cc V-twin. However, detailed specs are still lacking, so we’ll have to wait a little longer to discover key details like weight and performance figures.