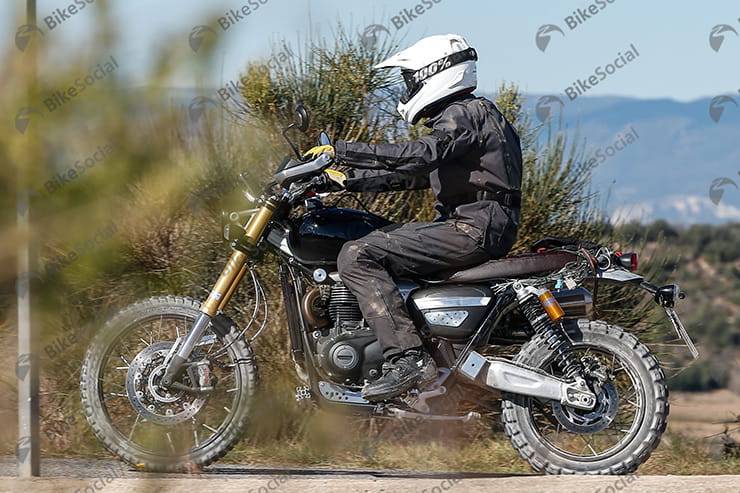 Cast an eye over Triumph’s ‘modern classics’ line-up of Bonneville-based machines and you might think they’ve covered all the bases. Standards, cafe-racers, cruisers, bobbers and scramblers have all been spun from the same water-cooled platform. But look a little closer and you’ll see there are still gaps in the range that are just waiting to be plugged.

These spy shots reveal one of those gap-fillers. It’s a new 1200cc Bonnie-based Scrambler to sit alongside the cheaper, 900cc Street Scrambler. And it might just turn out to be the most interesting derivative of the Bonneville yet.

And the fact that the water-cooled bike used the smaller, 900cc engine rather than the full-fat 1200cc motor, and bore the ‘Street’ addendum to its moniker that effectively means ‘junior’ in Triumph-speak left little doubt that a bigger version was on the way. Now it’s clearly on the verge of its official unveiling.

The new pictures show a bike that’s in close to showroom-ready condition. This is no early test mule.

It follows on from the likes of Triumph’s Bobber , showing a level of detailing and styling bravery that breaks new ground for the Hinckley firm. Far from simply bolting the bigger engine to the existing Street Scrambler, Triumph has gone all-out to create a bike that looks far more exotic.

Just look at some of the details. The polished aluminium braces in the handguards, mirrored in aluminium insets in the side panels and an alloy rear mudguard. The front fender’s missing, but you can bet it will be a high-mounted, aluminium piece to give the look of an oversized, retro motocrosser.

Then there’s the new, cast-aluminium swingarm, bolted to twin Ohlins rear shocks with remote reservoirs, helper springs and knurled damping adjuster for quick, tool-free suspension tweaks. Up front we find matching Ohlins upside down forks mated to twin discs and Brembo radial calipers. This is a seriously high-end entry in the Bonneville line.

It’s not just a case of throwing expensive parts at the bike, though. Triumph has put some thought in as well. Look at the oversized foot on the sidestand, for instance; Triumph clearly recognises that a bike with off-road abilities might be parked on a soft surface once in a while.

It’s also resisted the urge to go full-retro on the style. If you want to live out your Steve McQueen fantasies on something that’s been transported straight from the sixties, look instead to the Street Scrambler. This 1200 Scramber embraces modernity not just with its suspension but also with full LED lighting and even modern instruments, beautifully mounted in a CNC’d alloy bracket.

In terms of performance, Triumph has a few versions of its 1200 engine to choose from. Given the bike’s high-end appearance, it would be no surprise to see it get the ‘high power’ version used in the Thruxton.

If that’s the case, it will make around 96hp at 6750rpm and 83lbft of torque at 4950rpm. Not quite up there with the most muscular modern adventure bikes from BMW and KTM but more than enough to see off Ducati’s new Scrambler 1100, which musters only 86hp and 65lbft.

Alternatively, Triumph might opt for a lower state of tune, as used in the Bonneville T100, which manages 79hp and 77lbft, or even the Bobber’s torque-oriented motor which allies 76hp to 78lbft made at a much lower 4000rpm to give a torque curve as flat as the Bonneville dry lake bed that gives the whole model range its name.

Each engine has its plus points, and no doubt Triumph has experimented with each state of tune in prototypes of the Scrambler to settle on the version that works best in this application.

So what next for Triumph? The niche-filling strategy actually shows that there are still some holes in the enormous Modern Classics range that could yet be plugged. A smaller, 900cc Bobber, for instance, or a 900cc version of the Speedmaster cruiser , could yet be added. And given the existence of the more modern-looking, alloy-wheeled 900cc Street Twin, it wouldn’t be a big leap to imagine a 1200cc version of that idea. Triumph even owns the trademark rights it needs for that one: Speed Twin.