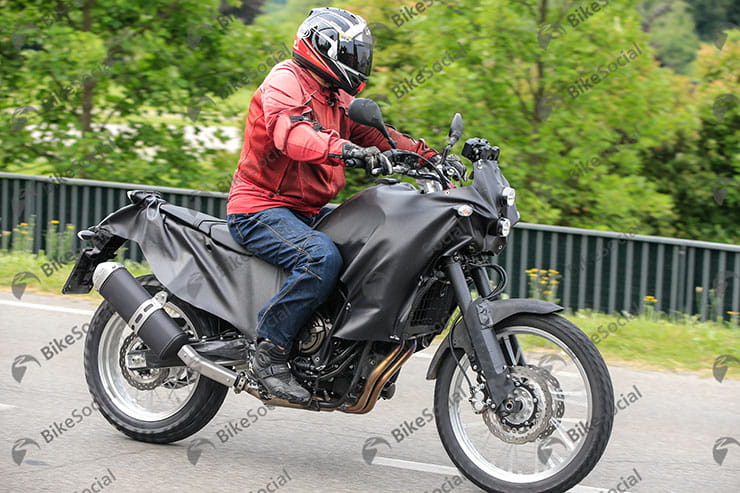 Yamaha’s upcoming Tenere 700 has got some big boots to fill when it’s introduced to the range later this year. The MT-07-derived twin will be the replacement for the old XT660 Tenere, which itself was a descendant of the original XT600 of 1984 and the 1975-on XT500.

That heritage matters because those predecessors differed from many of today’s so-called adventure bikes in one key point; they were actually rugged and capable propositions for off-road use.

To continue the lineage, the new bike’s full title is expected to be XT700Z Tenere, slipping into the range alongside the under-appreciated XT1200Z Super Tenere. But while the Super Tenere inevitably struggles to grab market share alongside the dominant BMW R1200GS, the XT700Z Tenere will have a much more open field to compete in. Sure, BMW is present in the middleweight market with the F800GS, but unlike its bigger brother, it’s not the default choice in a field where buyers are just as likely to opt for rivals like the Triumph Tiger 800.

Powered by the MT-07’s 75bhp twin, the Tenere will be fractionally less powerful than the Tiger or F800GS, but it’s also likely to be cheaper and, importantly, lighter, making it a more tempting proposition for off-road use. Just like its forefathers were. The use of that engine means that an A2 licence legal, 47bhp version is sure to be available as well.

Yamaha has already hinted at how seriously the smaller Tenere will be aimed at off-roaders with last year’s T7 concept bike. That was basically a preview of the new XT700Z Tenere, but with a few changes to make it even more extreme. It borrowed forks and the single front brake from the firm’s WR450F enduro, for instance, and had a hand-fabricated swingarm.

These pictures are the first to show a near-production version of the Tenere. While we can’t make too many assumptions about the styling, since the entire thing seems to have been draped in Batman’s cape, it’s clear that mechanically it’s representative of a production bike, right down to the road-legal exhaust system.

Unlike the T7, there are twin front discs at the bottom of upside-down forks that look like they might be borrowed from the MT-09. The aluminium swingarm is new and unique to the Tenere, although again it’s been covered – this time with duct tape – to hide the details of its design.

The suspension, allied to large, off-road wheels – probably a 21 inch front, 19 inch rear combo – gives the bike decent ground clearance, although not the towered height of the T7 concept, which had an impractically-high 990mm seat. The tyres again have more of an off-road bias than we’re used to seeing on adventure-style bikes, even if they’re not the full-on knobblies that the T7 sported.

While the parallel twin engine comes from the MT-07, which means it’s actually 689cc, the Tenere’s chassis is new. A tubular steel perimeter frame identical to that on the T7 concept, it’s a tried-and-tested format for off-road use and should prove rugged and lightweight. The T7 concept was reckoned to weigh around 175kg all-in. While the production Tenere will probably be rather heavier than that, it should still undercut the 85bhp BMW F800GS, which is 217kg wet.

That leaves the question of what lies under the rubbery-looking cloak that’s bungeed over the bodywork. The chances are that the final styling will be similar to the T7 concept bike’s, with the fuel tank stretching into elongated side panels either side of the radiator at the front and a near-vertical screen. The headlights certainly won’t be like the tacked-on units seen here. Instead the bike is likely to have vertically-stacked light unit covered by a single Perspex cover. The rear light of this prototype is also temporary; the final one will be neatly blended in to the tail.

Differences from the T7 will include the seat, which clearly isn’t as flat as doesn’t merge into the fuel tank, motocross-style, like the one on the concept bike. The new shape, with a notable dip behind the tank, is good news for anyone without stilt-like legs. The division between seat and tank is further exaggerated on the production version by the fact its tank is rather larger than the T7’s tiny aluminium unit – which will again be useful for anyone wanting to cover three-figure mileages between refills.

As with all adventure bikes, the basic machine will only be the start; most buyers will also delve deep into an extensive options list. The catalogue is sure to include the inevitable aluminium side cases and top box, sat nav mounts, additional crash bars and lights, different screens and exhausts and probably a selection of touring-oriented add-ons like heated grips.

All will be revealed later this year and BikeSocial understands that could be a lot sooner than November’s EICMA show in Milan - the scene of many bike launches ahead of the following model year.