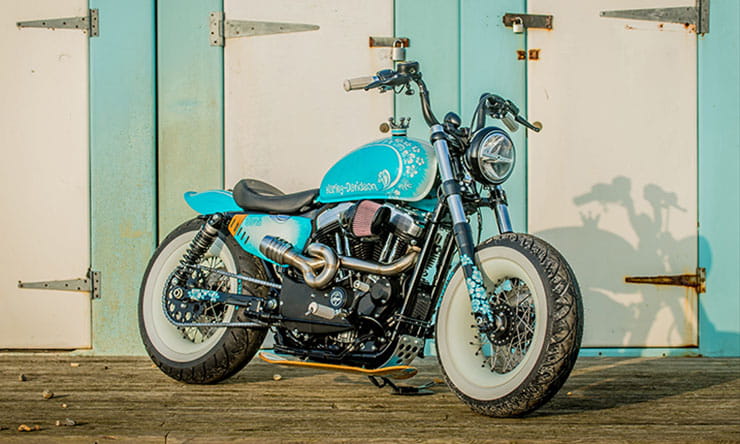 This cool beach buggy inspired custom will be Britain’s representative in Harley-Davidson’s Battle of the Kings contest, which will be held in Italy towards the end of the year.

Battle of the Kings is the American brand’s global build-off competition, where they invite dealers to build a custom bike based upon a range of eligible production models, while sticking to a strict budget. This year’s winner, dubbed Beach Bobber, is based on the Forty-Eight was built by Neil Sefton of East Sussex dealer Shaw Harley-Davidson and came within the £14,995 price cap set under the competition rules. It will line up against the best bikes from across Europe at Milan’s huge EICMA motorcycle show, which takes place in Milan in November.

The Beach Bobber saw off entries from 30 other UK dealerships in a two-stage competition. Round one saw an online public vote to determine the top five builds, which were judged by a seven-man judging panel made up of motorcycle industry professionals at the weekend’s London Motorcycle Show. They assessed the bikes against three criteria: design vision, originality and creativity and quality of build and execution. Shaw’s entry was deemed the winner, ahead of bikes from Guildford Harley-Davidson and London dealership Warr’s.

Commenting on his dealership’s success, Steven Willis of Shaw Harley-Davidson said: “I’m really stoked… It’s an absolute fantastic announcement. We are so proud to move forward and represent the UK and Ireland in Battle of the Kings – a competition that we think has always been unique to Harley-Davidson and an awesome competitive arena for the Harley-Davidson network to show our expertise in the custom market.”