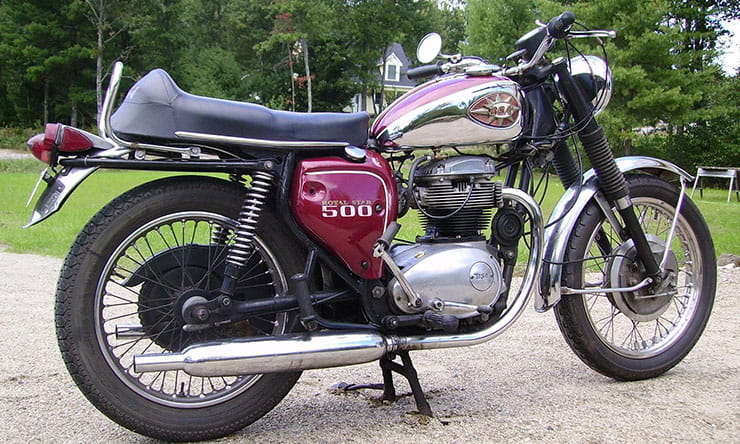 Classic British motorcycle brand BSA looks set to make a revival after being bought by Indian giants Mahindra for a reported £3.4 million.

Through a subsidiary company, Mahindra has purchased all 120,000 shares in the British-based BSA Company Limited for a reported £28.33 each. The acquisition gives the new owners the right to sell, market and distribute motorcycles bearing the BSA name globally.

Along with Norton and Triumph, BSA was one of the big three British manufacturers in the golden era of the 1950s and 1960s, but hit hard times and eventually folded in 1979 after a troubled spell as part of the government owned Norton Villiers Triumph (NVT) conglomerate.

Following the demise of NVT, the BSA name was bought by a Southampton based company who produced small numbers of Yamaha single powered bikes, including 1986’s Bushman and the Gold SR of 1999 – which paid homage to BSA’s famous Gold Star racers that were produced for 25 years from 1938.

In a statement to the Indian stock exchange, Mahindra stated: “With reference to the earlier letter dated October 18, 2016, wherein the Company had informed that Mahindra & Mahindra Limited has subscribed to and has been allotted 60,00,000 equity shares of Rs. 10 each of Classic Legends Private Limited ("CLPL"), constituting 60% of its equity share capital. In furtherance to the above, Mahindra & Mahindra Ltd has now informed BSE that CLPL, a subsidiary of the Company, has on October 21, 2016 acquired 100% of the share capital of BSA Company Limited.”

Although virtually unknown in the UK, the Mahindra organisation is massive in its homeland – producing everything from cars, boats, aeroplanes and farm equipment – and is making headway into the motorcycle market. The company has had an entry in the Moto3 world championship, formerly 125cc Grands Prix, since 2011 and took a controlling stake in French scooter brand Peugeot in October 2014. This year has seen Peugeot enter Moto3 with a rebranded Mahindra MGP30 racer, suggesting that the revived BSA name could appear on the grid in 2017.

Mahindra has been linked to talks with both BSA and Norton for several years and classic British brands are big business in India. Royal Enfield, now made in Chennai, are still some of the most desirable bikes on Indian roads, while Triumphs have proved a massive hit with the country’s more affluent riders since going on sale there a few years ago. Iconic British car brands Jaguar and Land Rover are also Indian owned, being subsidiary companies of Tata Motors since 2008.

UPDATE: The day after Bike Social broke this story, Mahindra confirmed that it had also bought the rights to the JAWA brand and that bikes bearing the BSA and JAWA names would be in production within two years. Read the full story here.