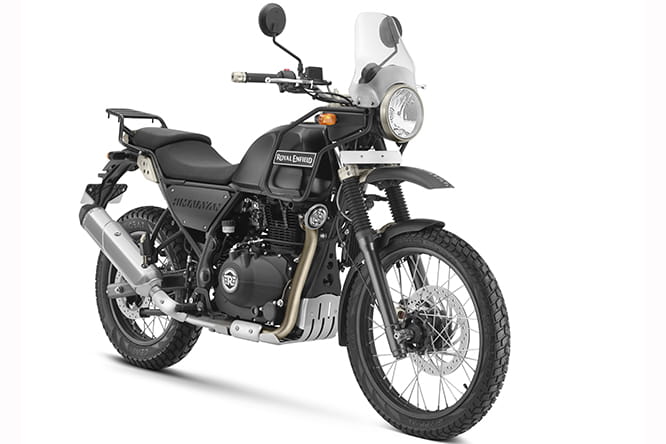 Indian firm Royal Enfield has confirmed that it will be bringing its new Himalayan to the UK after unveiling the bike to European press at the EICMA show in Milan today.

Launched earlier this year in its home market, the Himalayan is a 411cc single-cylinder adventure bike developed to be equally at home on the urban commute as it is tackling the mountains upon which it is named.

Despite its traditional looks and simple air-cooled engine, the Himalayan is an all-new design that features a chassis developed by British specialists Harris Performance and is powered by a new long-stroke engine that delivers 24bhp in the Indian spec we tested recently.

Much of the development work was carried out in the UK, from Enfield’s new Leicestershire base, and final testing of a new engine tune to meet European emissions laws. No exact release date or prices have been confirmed, but Royal Enfield say that they are confident that the bike will go on sale in the early part of 2017.

The Himalayan was one of four small capacity adventure bikes launched at EICMA, along with the BMW G310GS, Kawasaki Versys-X 300 and Suzuki V-Strom 250, and although the Enfield lacks the spec of its competitors, it certainly looks and feels better built than previous Royal Enfields.

The bike comes well equipped for long range riding with mounting points for hard luggage and jerry cans to further appeal to the ‘round the world riders. A simple instrument cluster keeps track of speed, direction, ambient temperature, travel time, service intervals and multiple trip distances. Ergonomically, the Himalayan looks to provide a comfortable upright riding posture, with an 800mm seat height with low centre of gravity giving the bike a wide appeal. Despite Pirelli off-road tyres being fitted to the bikes on display at EICMA, more road biased rubber will be fitted to Euro-spec production bikes. Dual circuit ABS continues Royal Enfield’s march towards modernity.

With 800,000 motorcycles sold each year, Royal Enfield are already serious players in the global motorcycle market, but the company stated its intention to expand its range and further appeal to western riders. They have recently set up a new technology centre in Leicester, complementing their facility in Chennai, and the company has stated its desire to become the world’s biggest selling manufacturer of mid-range bikes in the coming years.