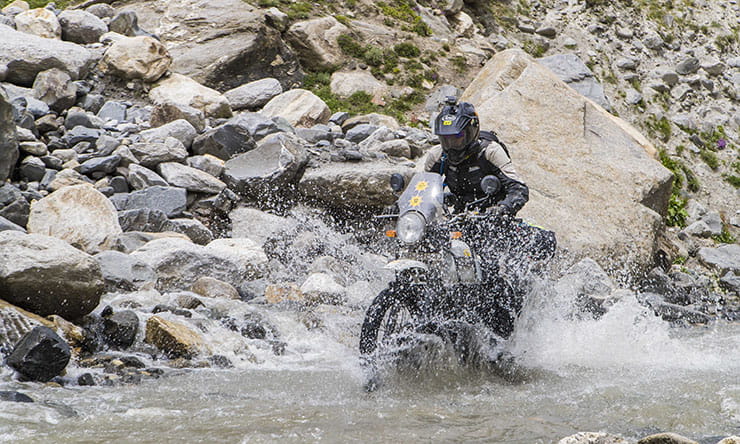 Royal Enfield's Himalayan is an important model for the Indian brand. With a new 411cc engine, it's aimed at less experienced riders and adventurers looking for a simple single to power them on their travels. It's not on sale in the UK, or at least not yet, so Geoff Hill headed off to the region after which the bike is named, on a 400-mile journey from Delhi to Himalayan town of Leh...

The first time I rode from Delhi to Chandigarh was with my mate Paddy. We were riding a pair of Royal Enfields, on the first leg of a 7,000-mile ride back to the UK.

It was 1998, I’d passed my bike test two years earlier, and ridden 30 miles on a bike in my life. Including the test.

This time, I was 18 years older, and not a bit wiser, but at least the Royal Enfield was better than ours back then, which were made of little more than tinfoil and hope.

The new Enfield Himalayan, it’s designed for newbies moving up from a 125cc machine and with their gaze fixed on the horizon, just as good at going to the shops as to the Himalayas.

Which was exactly where I was heading, on the Himalayan Odyssey, one of a host of official Royal Enfield rides from a company already making 400,000 bikes a year, with a new 750cc twin in the offing, and hell bent on global domination of mid-range motorcycling by 2020.

Rather than fitting the existing 500cc Bullet engine with a small bore kit, the Himalayan’s 411cc lump is fresh off the drawing board, and has a carb rather than injection. Remember those?

Enfield’s rationale is that a carb is easier to fix in the back of beyond by a man with a hammer, while the bike’s adventure credentials are ticked by a Harris chassis, rear mono-shock, long-travel suspension, crash bars, upswept exhaust and 21in front wheel.

The 15-litre tank may not sound much by GS Adventure standards, but with the frugal long-stroke engine giving upwards of 80mpg, it’s enough for a range of up to 230 miles.

The biggest surprise, though, as I climbed aboard in Delhi, was the dash. Compared to my Enfield, which had a speedo and ammeter, this was like the instrument panel of the Space Shuttle, with a speedo, tacho and a digital panel telling you everything to the time of high tide in Hong Kong. It even has a compass, just in case you get lost on the way to Sainsbury’s.

As I rode north on the dual carriageway out of Delhi with 75 Indian riders on various Enfields and a smattering of Australians, French and Colombians, it was 46C and as humid as a Turkish bath.

I could tell I was in India when I passed an elephant trundling along the slow lane, but at least he was going the right way; the last time, I’d met a horse walking the other way down the fast lane, although I use the term lane loosely, since locals pay little attention to them, traffic lights or other road users. Still, it’s not as bad as Naples.

As for the bike, acceleration, as you’d expect with only 25 horses under the tank, didn’t set my pants on fire, although to be fair, my pants were so soggy due to the heat and humidity that even a Multistrada running on methanol would have failed to ignite them. 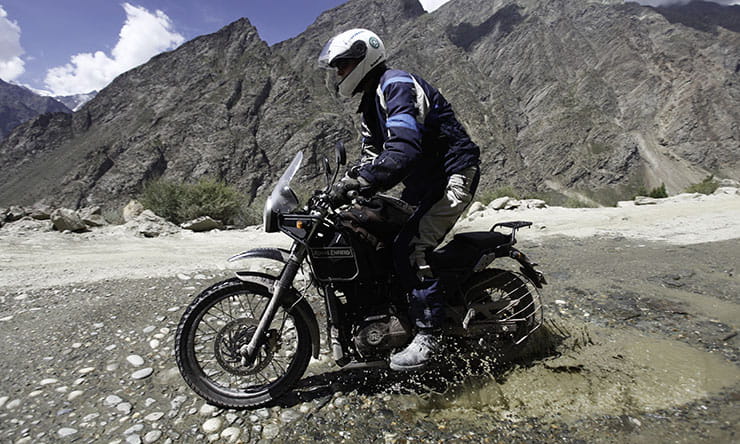 Having said that, it’s perky enough if you keep it in the sweet spot between 3,000 and 5,000rpm, and the real surprise was that even at a top speed nudging 75mph, the engine’s balance shaft kept it so smooth that the mirrors were rock-solid compared to the vibey 500cc Bullet and 535cc Continental GT.

Mind you, at that speed, the engine was talking to me, and what it was saying in cultivated Anglo-Indian tones was: “I say, old chap, are you late for an appointment or something?”

I apologised profusely, and settled back to a contented 55mph and 5,000rpm.

Handling was sweet and light, and the combination of that 21" front wheel and 8" and 7" suspension travel on the front and rear respectively soaked up even the most ham-fisted efforts of RJ Singh, voted India’s worst road builder for the past three years.

However, the real test would come in the mountains, where every spring the Himalayas chew up the roads and spit them out to teach humans a lesson about trying to conquer nature.

The brakes, meanwhile, have only one disc up front, but it’s more than adequate with only 183kg of bike to haul in, although with no slipper clutch, the back wheel locked quite easily when changing down to first.

Still, with such a light bike it was never a problem, and it was accompanied by a delicious symphony of pops and barps from the exhaust.

Only faults? A seat designed for Indian riders, who weigh much less than I do, and a slightly pernickety gearbox which needed to be seduced into action rather than told what to do, and which even after several days was still spurning my attempts to introduce it to the joys of neutral.

Chandigarh, the city of graceful buildings and wide boulevards designed by the French modernist Le Corbusier in the Fifties and our first stop, is famous for architecture and buttered chicken, the regional speciality.

We hopped into a tuk-tuk for a tour, admired the former as tasteful, then stopped at a family restaurant packed with locals, and admired the latter as much more tasty than modernism.

After the heat, dust and drudgery of the plains, the next day was a symphony of curves with the road rising and the mercury falling, a peg-scraping blast through forested foothills and splashing rivers to Manali, the pleasant alpine town where the good citizens of Delhi come in summer to escape the heat, and in winter to marvel at the wonder of snow.

I ate delicious river trout at Johnson’s Café, founded by the progeny of a player in the Great Game who had retired here aged 70 and married a local 19-year-old, as you do.

Over the next few days, the road played with us, coyly offering us stretches of perfect tarmac then whisking its veil away to reveal miles of ugly roadworks, but at least standing on the pegs gave me a break from the seat, which I was now beginning to dislike more than an ex-girlfriend who kept popping into my head uninvited.

Other non-Indian riders felt the same, so if and when Royal Enfield does introduce the Himalayan to Europe, I suggest it comes up with a saddle suited to more substantial buns.

All around as we rode, rested and stopped for photos, the mountains fisted to the sky, either yearning for heaven or angry that no matter how much they yearned, they would remain forever earthbound. Unlike the eagles who soared above their peaks, mocking us all with their effortless grace.

Still, getting on a motorbike and setting off makes us all feel better, and we saddled up and rode on, over passes as high as 17,480ft and past the cheesy safety signs of the Border Roads Organisation, with slogans such as “Hug my curves, but not too tightly”, “Driving after whisky is always risky”, and the splendidly antediluvian “Don’t gossip. Let him drive”.

You could just imagine an office at BRO HQ with Department of Cheesy Slogans on the door and a Big Cheese sitting behind a desk inside.

Suddenly, the door bursts open, and an excited junior clerk rushes in.

“Sir! Sir! What about…Don’t lose your nerves on the curves?”

“Splendid! You will go far, young Vijay,” beams the Big Cheese, and makes a note.

The many trucks we passed bore their own slogans: Blow Horn, Use Dipper at Night, Keep Your Distance, and once, the bittersweet Alone but Happy.

Which was more than could be said for the unluckiest man on the trip: one of the Indian riders who soaked his boots at a water crossing, changed into his shoes and tied the boots on the back of his bike to dry.

At lunch, discovering one had fallen off, he threw the other one way as useless and rode on. Only to find at the end of the day that the support truck had picked up the first one.

By now, although the Himalayan was coughing and spluttering because of the altitude, its chassis and suspension was in its element, dancing through mud, gravel, sand, snow and water crossings as lightly as a ballerina.

At Leh, I patted its tank sadly as I said farewell to it, and took a taxi to the airport.

“What were you doing in the mountains, sir?” said the driver.

I didn’t disillusion him, since given the choice between the Himalayan and a Multistrada on the roads I’d ridden over the past week, I know which I’d choose, and it’s not Italian. Or red.

Price: Not yet available in UK