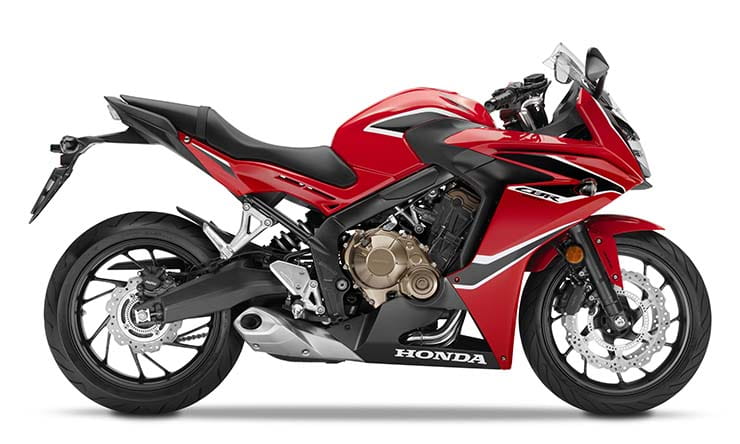 In line with the changes brought in for the unfaired CB650F, Honda’s middleweight all-rounder – the CBR650F – has also been given a revamp for 2017.

Originally introduced in 2014, the CBR650F gets a host of engine updates to both make it Euro4 compatible and unlock some extra horsepower. Honda are claiming 90bhp for the versatile CBR, and increase of 3bhp on the previous model, and report that the 2017 version will sound better thanks to a revised air intake and free flowing exhaust.

Honda says that the increased peak torque of 64Nm arrives at 8000rpm, with the engine able to pull from as low as 1500rpm in sixth gear. Like almost every bike updated to come in line with Euro4 emissions regulations, the 649cc in-line four has been given an internal makeover to reduce internal friction. In the case of the CBR, asymmetric piston skirts minimise bore contact and reduce friction, while ferrous spines on the outer surface of the cylinder sleeves reduce friction and oil consumption, with improved heat transfer. The silent cam chain reduces frictional losses by using a vanadium coating on its pins. Internal water channeling from cylinder head to cylinders removes the need for most of the exterior hoses.

Like the CB650F, the chassis has been update with new 41mm Showa forks featuring what they call ‘dual bending valve’ technology. Honda says that the forks improve ride comfort and handling, delivering proportional rebound damping with firmer compression damping as the 120mm stroke is used up. At the rear, the monoshock unit is adjustable for seven-stage spring preload.

Like the naked bike, the CBR650F has been restyled with new bodywork. There’s also a red and black colour scheme that echoes that of the 2017 CBR1000RR Fireblade, with classy white and black options also available.