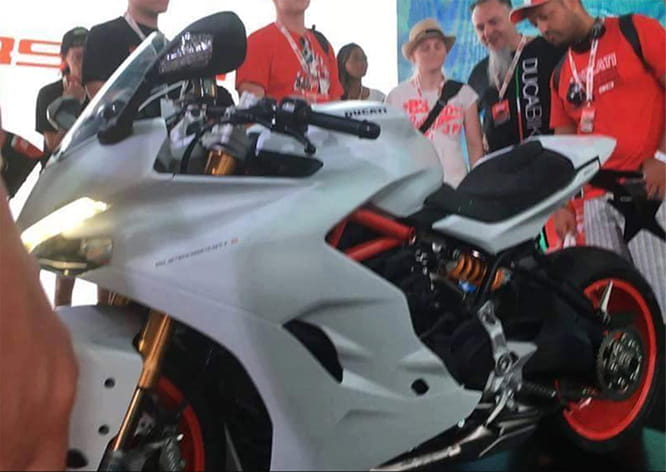 Prior to the annual World Ducati Week event at Misano in Italy, which is actually over three days, Ducati announced they would have a brand new model hidden in a box.

While the rules were clear; small groups were permitted to look but not touch and most certainly not photograph, it was obvious that at least one sneaky picture would make its way onto the world wide web. In the same way the Scrambler was unceremoniously revealed two years ago.

So, here it is. The brand new Ducati Supersport S. A couple of pics have made their way onto websites and forums yet nobody seems to know the source.

What do we know? Well, it’s clear to see the ‘Supersport S’ moniker on the half faired motorcycle, designed with comfort and wind protection in mind and harking back to 10 years ago when the SS1000 ceased production – a bike that sat in the middle of the sports and touring sectors.

There are not many technical details floating around and of course Ducati are playing the same game as before, generating plenty of global interest over the months leading up to the official announcement which is very likely to come at the annual EICMA motorcycle trade show in Milan in November. The cynics might say the Borgo Panigale-based manufacturer might well have leaked the pictures themselves to build up the interest. Had nobody reported on their new Supersport S then what would be the point of going to all that effort? I generates excellent publicity not only for the bike but for the brand and the event. 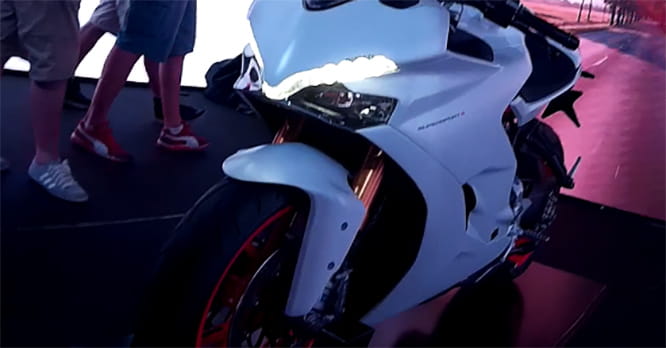 Raised clip-ons offering a more upright riding position with a large screen, tubular steel trellis frame like the Monster, single-sided swingarm, removable pillion seat cowl, Panigale-esque styling all point at a 959 Panigale-based sports tourer. While Ohlins USD adjustable forks at the front and monoshock on the rear plus Brembo calipers could point towards this being an ‘S’ model while a standard SS model could also be available.

Expect plenty of spy shots ahead of the Milan shows. We'll be reporting live when the bike and full specification are officially announced.