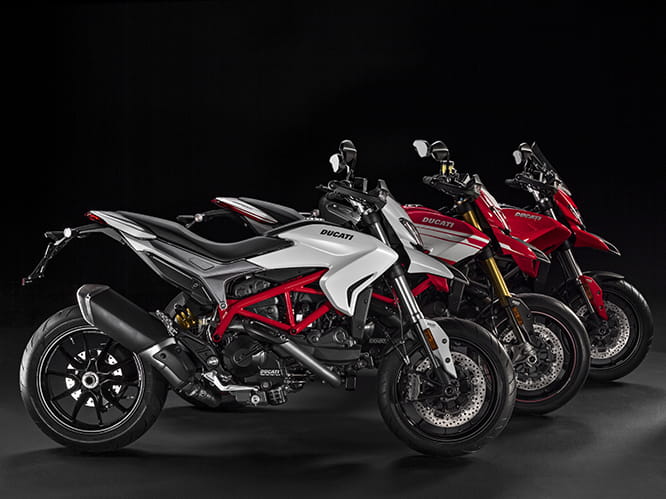 Never a bike for the shy, retiring type, Ducati has updated its Hypermotard, Hypermotard SP and Hyperstrada with a bigger engine and even more grunt for 2016.

Thank the boffins who decided that bikes have to be cleaner and quieter for new Euro 4 emissions regulations in 2016, because what it means for us is that to get similar power out of the engines that are now more heavily restricted by a longer, power-sapping Ducati have built bigger engines to play the system. We’ve seen it already with the Ducati 899 Panigale which grew to the 959 Panigale, and now it’s the turn of this – the Hypermotard 939.

Whoever the man in the white coat who thought of that is, shake him by the hand. This probably isn’t what he had in mind.

Those extra 116cc’s mean (up from 821cc to 937cc) the Hypermotard is as in your face as ever, a gangly, tall overgrown motocross bike with a big booming Ducati engine. But this time it gets more torque, more power, and more mid-range grunt. 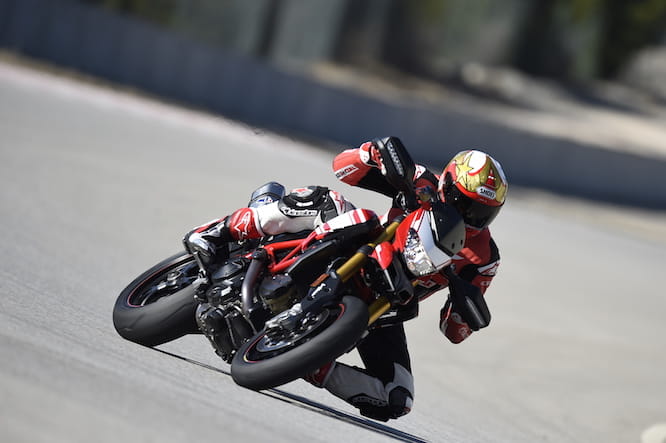 And as before there are three Hypermotard based bikes in the range which all use the same basic engine and chassis platform - the base model Hypermotard at £9995, the more touring inspired Hyperstrada at £11,195 and the hilarious extreme track focused Hypermotard 939SP at £12,595. We rode the standard Hypermotard on the roads near Barcelona, and the SP on the Circuit Fast Parcmotor Castelloli, but more about that later.

Essentially the bikes feature the same trellis frame, suspension and basic chassis and styling as the old bike with a few tweaks.

There are new hand guards with LED indicators at the front and the the riding position is slightly different putting the rider’s weight on the front.

It also gets tweaked LCD clocks with a gear-shift indicator, an oil cooler and a new seat.

Other than that it’s the same big supermotard that we’ve come to know and love. A big, oil and air-cooled motor, a great-handling front end chassis that lets you pin it into bends and fight the traction control on the way out. It’s whizz bang, torquey motor, wheelies and skids all the way.

I’d come to this test thinking that the Hyper wouldn’t feel too different but it does in spades. The Hypermotard has always been a good, if slightly focused bike, but now its even more of a big, crazy Labrador puppy that throws two fingers up to the men in Belgium trying to makes bikes quieter, Instead, bikes just got bigger, faster and even more torquey. Screw you Belgium.

Ducati themselves say it’s not a revolution, more of an evolution and they’d be right. 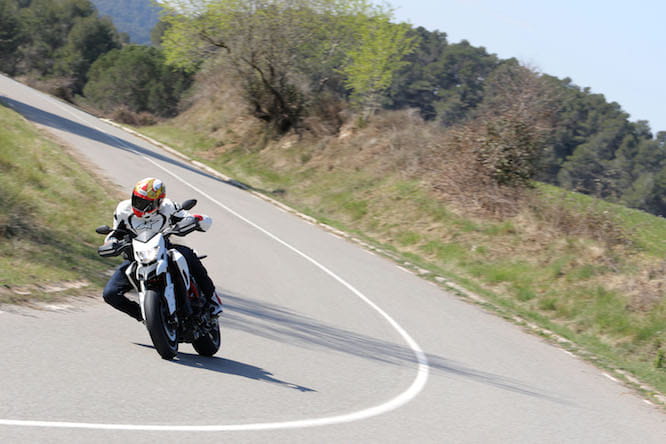 The same basic concept of a supermoto with Ducati performance still exists but it’s more refined and sharper.

The 821cc outgoing bike was a lovely free-revving engine. In its new 937cc guise the Hypermotard 939 gives that same free revving nature but there’s more torque everywhere. From 3000rpm out of a slow speed corner the bike will pull cleanly. From 5000rpm, 6000rpm and 7000rpm the bike is in its sweet spot.

On our short ride with ultimate hooning speed controlled by a lead marshall, I didn’t get to rev the bike out, but most of the time when riding fast you don’t need to rev it past 8000rpm. If you do a red light flashes on the dash just before 10,000rpm. Maximum power of 113bhp comes in at 9000rpm.

At low speeds in sport or touring mode the bike is a bit lumpy in town, but switch to Urban which cuts power to 75bhp and it’s much nicer and more manageable. The throttle is smooth and the tall, narrow Ducati is a joy to ride through town in Urban mode. The clutch is light, the wide bars give you plenty of leverage, the riding position sits you up high and it’s narrow to slot through traffic.

Okay, so the mirrors are too small, but you soon get used to it. In a big city this bike would be a massive weapon. A cross town traffic urban warrior.

Out of town the bike becomes a tool that’s up for playing. The standard Hypermotard we rode on the roads is only good for about 80mph before it starts to feel uncomfortable as there’s zero wind protection on the standard Hyperstrada. It will pull a lot more of course and the motor is always up for it, but you don’t want to be going much faster in a straight line. It’s in the bends is where the supermoto-inspired bike comes alive.

Your weight feels more over the front than ever. It’s all on the front-end, the long travel Kayaba suspension diving on the brakes but with good damping as the weight gets transferred to the front Pirelli Diablo Rosso II tyre. The Brembo brakes are good, never staggering like the higher-spec M50 Brembos, but more than up to the job.

On our test in the mountains near Montserrat, the surface always felt like it had just a bit too much dust on the surface, but the suspension set-up gave good feel and grip for the conditions, considering. 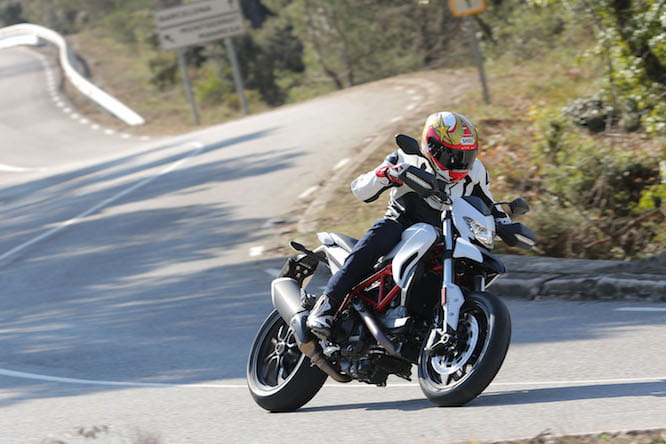 Because of the surface I had a couple of slides from the rear when in Sport mode which allows less traction control, but it’s nothing that the brilliant traction-control couldn’t catch. And when it comes in it’s so subtle that you only really know it’s one when the light flashes. The Bosch system is the same as the old set-up but it has been recalibrated to work with the new engine.

It also means that in Sport and Touring mode you can have some fun. It lets you wheelie through the gears without slamming the front wheel down like some older systems did. It even sounds good despite that new, Euro 4 friendly silencer.

The Hypermotard is never going to be a big mile eating comfortable bike The seat is high, it’s narrow and hard, but as a bike to hoon around on and take out for 40 or 50 mile Sunday blasts where you can seek out the twistiest roads you can find, the Hypermotard is about as good as it gets for full-on hoon attack mode.

Let me be up front here, I used to hate the original 2007 Ducati Hypermotard. It was out run by a Triumph 675 Street Triple, was gutless, crap on anything but a supermoto track, and didn’t even handle that well.  Then they made it into the Hypermotard 821 and it was ace, the SP even better. But never did I expect to have this much fun on a 4km long circuit as I just have at Circuit Fast Parcmotor Castelloli. The SP is meant for this track and I need to have my grin laser removed.

With an aftermarket Termignoni exhaust system putting out an extra 3bhp and a whole lot more soul, the Hypermotard SP is pulling some serious speed down the straight. It sounds like a Ducati oughta with the pipe and it looks a million Euros in its fancy red and white MotoGP style paint scheme, with the bling Marchesini forged wheels and that tall Ohlins suspension.

But it’s the way it rides that surprises me. 113bhp shouldn’t be this much fun. The chassis and that radial-mounted set of Brembos compared with the standard suspension means you can nail it on the brakes way later than you thought bang it through the gears and flick it in.

Pass the 300 metre board and you can hook another gear. Seriously. Get to 150metres and make full use of the brakes and there’s still more to give. 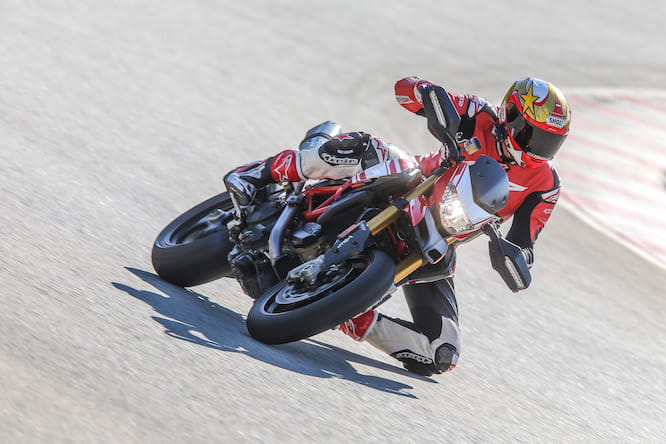 The stickier tyres help too The Pirelli Diablo Rosso Corsa tyres are near slicks with a couple of road-legal grooves and they’re amazing on this bike. There’s never enough grunt to move the rear, just trust in the traction-control, and on the front you can hold a line. On a couple of bumpy corners, the bike shook its head, but nothing that worried me and you can get on the power so, so hard.

I’m some 14 stone 7lb and tall too at six feet four inches, so never had problem with the vast seat height, but if you’re smaller then you might want the 20mm lower seat option. Because of my bulk the rear Ohlins was sitting down a bit at the back on the exit of a few corners, but three clicks of compression damping at the back sorted it and made for silly fast lap times.

You use higher revs, making full use of the bike’s top-end and all of its available 10,000 revs but combined with the chassis you can get away with big lean angles when the pegs eventually scrape, and big corner speed. This bike is all about booming out of third gear corners with the front in the air and the bike all crossed up. It compliments good riders. I even had it backing in sideways in to a hairpin on purpose, and I never do that, such is the confidence this bike instills in you.

The SP is a hell of a lot of money, and no surprise that it’s bought as many people’s second bike. Lucky them I say. It’s a toy, a very expensive one at that. But it’s also beautiful and so purposeful it’s hard to think of another production bike that’s so pure and single-minded in its destiny of just going fast on a bumpy racetrack. And for that I love it. 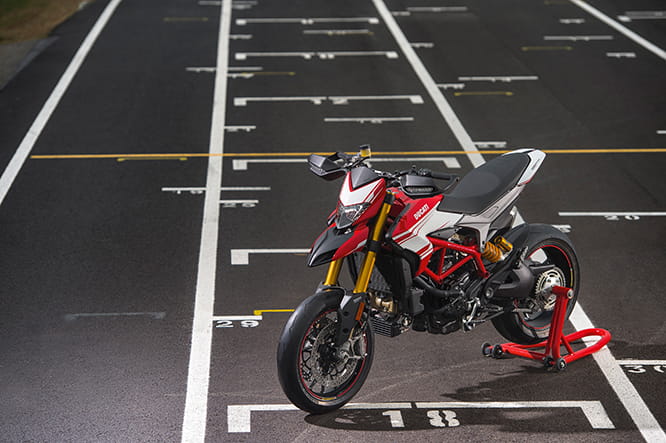 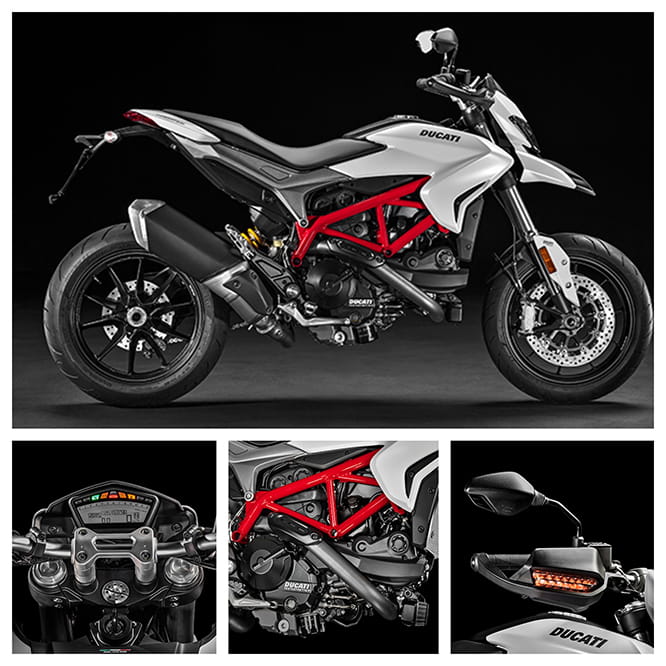 All three bikes have riding modes, similar to the old bike but restrung for the new motor. Each mode selected tweaks the engine mapping, traction control and levels of ABS depending on the setting – race, sport and wet on the SP and Sport, Touring and Urban on the Hyperstrada and Hypermoto. The wet mode uses 75bhp compared to the 113bhp of the other maps. Touring uses full-power but with a more gentle fuelling map.

Up front are Brembo 4-piston Monobloc M4-32 calipers with 3-levels of ABS, including a track-oriented setting to allow the rear to slide. Massive 320mm front discs and a 245mm rear disc ensure the bikes pulls up its relatively low weight quickly. The brakes are radially-mounted on the SP with a different master cylinder which gives more feel and power at the lever. 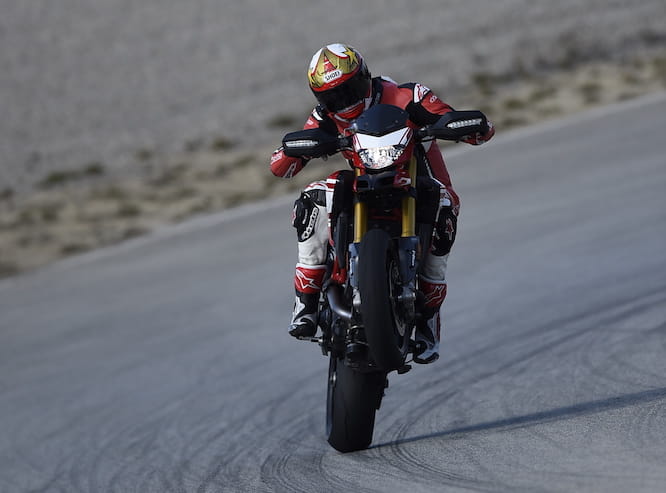 The Hyperstrada uses Pirelli Scorpion trail tyres and upside down 43mm Kayaba front forks with a Sachs rear shock and single-sided swing arm. It’s the same suspension set-up on the Hypermotard but it has more road-biased Pirelli Diablo Rosso II tyres. All bikes use a 16-litre tank and have an 18,000 mile service limit.

All-in-all it gives the SP a maximum lean angle of 47.5 degrees. If you can get on it of course! As is tradition with the SP it has a massive seat height, coming in at 890mm compared to 850mm on the standard bike. A lower 870mm SP seat is available as a factory order.

The more touring inspired Hyperstrada is based on the Hypermoto but also gets a touring screen, touring seat, side luggage, a centre stand, two power sockets, a larger generator to cope, remote rear pre-load for better adjustment with a passenger, and extended front and rear mudguards.

Looking for bike insurance? Get a Ducati motorcycle insurance quote with Bennetts today!