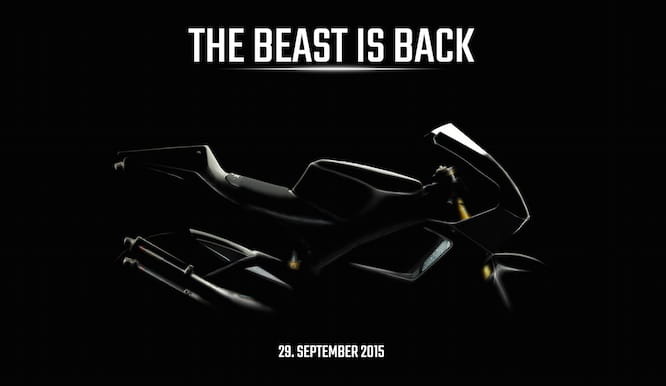 Dubbed the ‘Legends 500’, the new Suter 500 V4 will be unveiled at the World GP Bike Legends launch in Zurich on 29 September.

While being brand new, the Suter 500 is said to retain the ‘tarmac-shredding soul’ of the original machines that inspire it while being ‘safer’ and ‘more reliable’ and it’s thought the bike will cost a fraction of what an original two stroke 500 GP bike would cost today.

Suter Racing, established by former 250 and 500cc Grand Prix racer Eskil Suter, have a wealth of experience building Grand Prix bikes. He worked on the chassis development of the MuZ 500cc bike before going on to work with Kawasaki's ZX-RR four-stroke MotoGP bike and then becoming a leading chassis manufacturer in the Moto2 class, taking both constructors' and riders' championships with Marc Marquez in 2012.

The inaugural World GP Bike Legends took place at Jerez earlier this year and while the event was largely a success, organisers faced a lot of difficulty sourcing both original and replica 500cc GP bikes with owners who were willing to accept the risk of them being raced.

A statement from the event's organisers read: “The event held at Jerez in June showed that the passion for 2-stroke machinery is stronger than ever, and while the original bikes that wowed millions of fans around the world are growing ever more valuable and scarce, the stunning new Suter Legends 500 will provide all the sights and sounds at a fraction of the cost to the irreplaceable originals.

“The added safety and reliability of the new machines will allow for unbelievable elbow to elbow battling the like of which has never been seen in the classic racing world, and it’s sure to wow fans and provide incredible TV too.”

Full details of the bike, plus the package you can buy will be made available following the launch in Zurich next week, where it is also expected details of the 2016 Race of Legends will be announced Watch this space!

Would you fancy owning an affordable 500cc GP bike?  or !