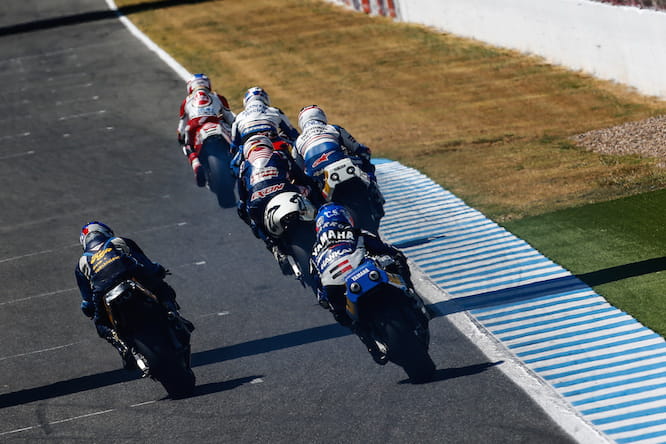 Some say there's no racing better than the old 500cc Grand Prix class. It�s true, there isn�t much better in life than the sound of a screaming two stroke, the smell of Castrol R and the sight of a grown man fighting a wild Grand Prix bike that wants to catapult him into the air every time he opens the throttle.

No electronics, traction control, anti-wheelie � it all came down to a rider�s right wrist.

And this weekend in Jerez, this was all true once again as the inaugural World GP Bike Legends events kicked off.

With over 300 Grand prix wins in the entry list, Wayne Gardner, �Fast� Freddie Spencer and Kevin Schwantz each took to the top step in the weekend�s frantic racing activities.

Aussie Wayne Garner took victory in the first 500cc race aboard his Cagiva V589, ahead of the RGV500 mounted Didier de Radigues and Kevin Schwantz. 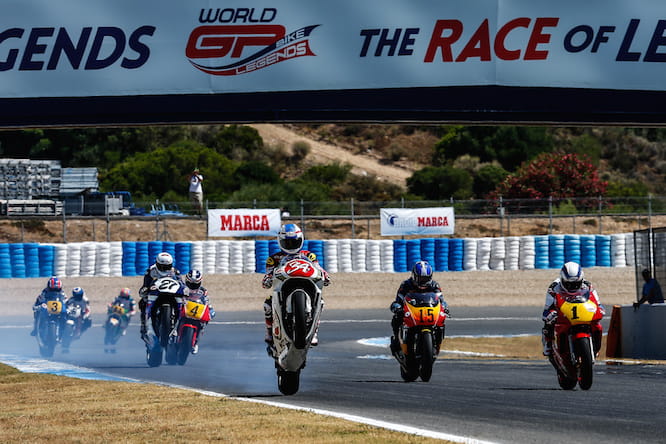 It was the turn of three-time World Champion Freddie Spencer in race two, who having been unable to source an NSR500 was aboard a stunning Yamaha YZR500 OW48R. He beat Scwhantz and first-race podium man Didier de Radigues.

Having finished third and second in the first two races, Kevin Schwantz stepped up to the top step in the final race of the festival pipping Freddie Spencer and Yamaha-mounted Niggi Schmassmann.

�This event is all about what we�ve been experiencing outside with the public� said Spencer. �It�s the passion and the emotion that gets generated � I�ve been around motorcycles my whole life, and it has given me so many things � and the look on people�s faces is what it�s all about. I saw a couple of young guys in the paddock and they said �thank you so much for doing this and allowing us to see you live�, and that�s what it�s all about. For us it�s also brilliant to be back on the 500s, I've been riding a bike I was actually racing against back in the �80s! It�s the beginning of this connection between us guys up here, the collectors who have given us the opportunity to ride, and the fans who have come along to see us. I�m truly looking forward to where this is going in the future.�