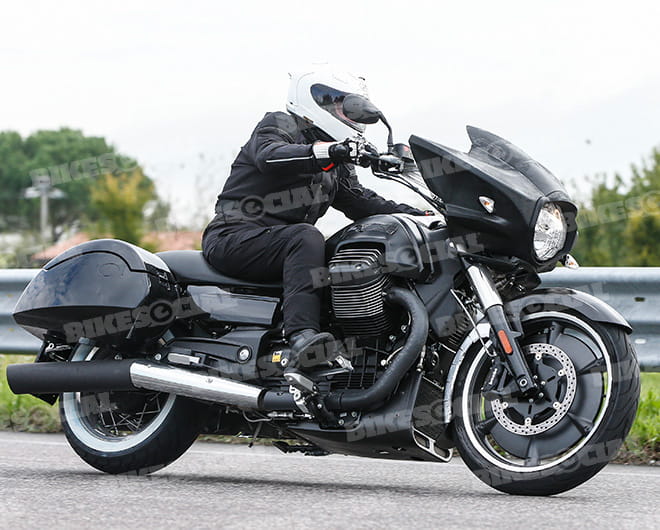 The near-production ready bike has been spied going through final testing ahead of its unveiling as a 2016 production model at next month’s Milan-based motorcycle trade show, EICMA. Code-named MGX-21, the bike made its debut as a prototype at the show last November.

The Bagger-style model appears to be based on a mixture between the 2015 California Custom and Eldorado models and was photographed leaving Aprilia’s development facility in Noale, North Italy.

Its big air-cooled cylinders stick out underneath a shapely fuel tank complete with deliberate cut-outs show that the same low-revving 96bhp power plant from the Eldorado and California Custom will be used. While the batwing front-end styling, new exhaust system and new seating arrangement are noticeable upgrades. As are foot pegs instead of foot boards and the addition of hard luggage.

One source suggests an upgraded audio system will be part of the all-new digital instrumentation which controls the Guzzi’s engine maps, traction control and cruise control.

However, one of the more interesting features on the Moto Guzzi are its mismatched wheels. The 21” front rim appears to be a carbon/aluminium hybrid construction while the rear wire-spoked wheel has been taken from the Eldorado but don’t expect to see this on the final production version.

Our snapper in Italy also confirmed the bike was being compared a Harley-Davidson Electra Glide.