There’s an undeniable touch of Hollywood glamour about Moto Guzzi’s latest V-twin cruiser, even for those who associate the name Eldorado with a short-lived TV soap opera from the early Nineties. This Eldorado is a big, laid-back V-twin with plenty of chrome. Its promotional video stars long-time Guzzi fan Ewan McGregor, and it was developed at the Piaggio Group’s Advanced Design Center in Pasadena, just across Los Angeles.

The Eldorado has ancestors on the American west coast too. Back in the early Seventies the original Eldorado was a luxurious 850cc model based on the 757cc California, which itself had begun life as a roadster created in conjunction with the Los Angeles Police Department. 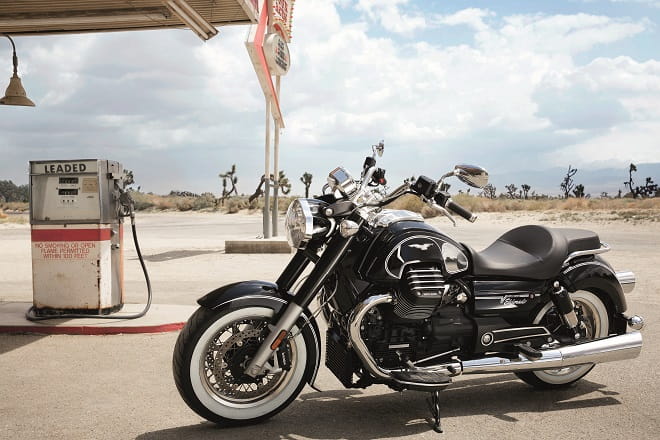 But like that original model, the new Eldorado is as unmistakably Italian as Moto Guzzi itself. Its engine is a 1380cc, 90-degree transverse V-twin whose big aircooled cylinders stick out underneath a shapely fuel tank which, in this bike’s case, has pinstripes and shiny chromed panels on its sides.

The new Eldorado is also a development of the California, in its case the current California 1400 that was introduced two years ago in fully-equipped Touring and cut-down Custom models. With its high, pulled-back bars, white-wall tyres, footboards and plenty of chrome, the Eldorado sits somewhere between the two Californias, lacking the screen and luggage of the Touring but with a more laid-back look and character than the Custom.

It’s a classy looking bike, sharing California details such as the intricately shaped headlight with its LED running lights, and adding others of its own including the wraparound fenders and chromed rear light. At 314kg it’s heavy but its seat is low at just 740mm so it’s easy to get both feet on the ground as you fire up the engine, which sends the bike rocking to the right in trademark Guzzi fashion as you pull in the clutch and blip the throttle. 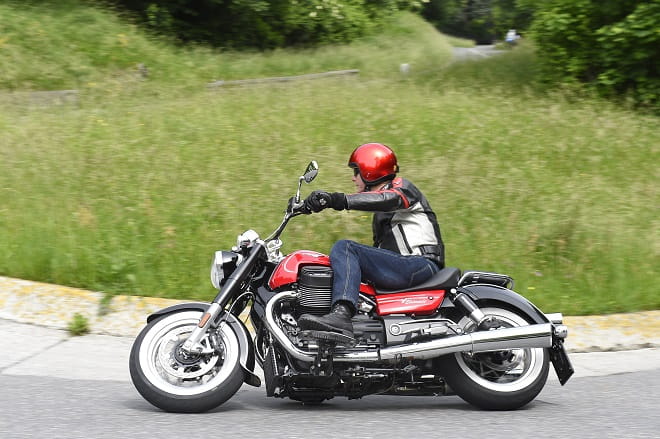 The aircooled, shaft-drive engine is unchanged from California spec, apart from minor fuel mapping mods that don’t change its maximum output of 96bhp at 6500rpm. Despite the traditional layout it’s a respectably modern device, with ride-by-wire throttle control, three engine maps – Veloce, Turismo and Pioggia, or Fast, Touring and Rain – plus cruise control and a three-way adjustable traction control system.

It’s such a gentle, softly tuned lump that you could happily use the most aggressive Veloce all the time, but Turismo gives a slightly softer delivery that works well at slow speeds. (Pioggia cuts power so really is just for the wet.) Guzzi developed a new rubber-mounting system for the California and the Eldorado’s is identical. At very low revs the big motor jumps about in the frame, but when you pull away it magically smooths out to give a very shake-free ride.

A very relaxed and rider-friendly one, too, because the big V-twin is very grunty, pulling crisply almost from idle, and churning out its impressive maximum torque output (88ft.lbs) at just 2700rpm. The six-speed gearbox is slightly clonky but I rarely needed to trouble the heel-and-toe lever on the road that curves along the lake near Guzzi’s base at Mandello del Lario, where the Eldorado rumbled along effortlessly in fourth or fifth, feeling effortlessly smooth and grunty.

Straight-line performance is almost identical to that of the California, including the tall top gear which is really an overdrive and gives a very relaxed and long-legged cruising feel. The big difference is that this bike has no screen, so the upright riding position means there’s plenty of wind in your chest. That was fine on a mild day in northern Italy but inevitably the Eldorado can’t match the Cali for long-distance ability, though it can be fitted with three sizes of screen as an accessory. 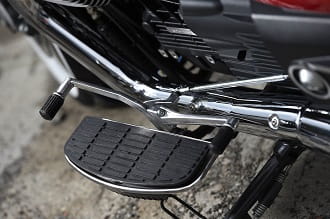 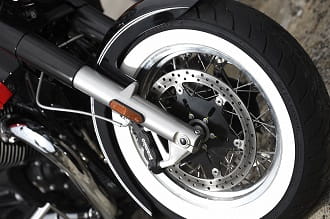 Guzzi’s big V-twins have generally handled pretty well over the years, and that’s true of the Eldorado, which also shares most of its chassis spec with the California Touring. The difference is in its wheels, where it has a pair of wire-spoked 16-inchers (instead of the Cali’s cast wheels and 18-inch front, 16in rear combination), and wears Dunlop American white-wall rubber, the rear a narrower 180/65 instead of 200-section tyre.

That possibly gives slightly lighter steering, and the Eldorado cornered well enough to be fun on the hilly roads around Mandello. It’s a big, heavy and long bike, with kicked-out front forks, but the wide bars gave enough leverage to make it easy to crank it even into the tighter turns. And although it ran out of ground clearance long before those white-walls ran out of grip, it cornered hard enough to be fun, and gave plenty of warning via the footboards’ plastic scrapers.

Ride quality was good, helped by the well-padded seat, despite a less than generous 120mm of suspension travel at each end. There was plenty of stopping power, too, thanks to big 320mm front discs and Brembo four-pot calipers, backed up by an efficient ABS system although surprisingly, like the California, not by an old-style Guzzi linked system. That meant I had to lift my foot off the board to reach the rear brake pedal and add some help from the third disc.

All in all the Eldorado was a very pleasant bike on which to cruise along that lakeside road, to scratch round a few hairpins, and to park up at the lunch stop and admire its classically handsome lines. I’d be slightly concerned about the longevity of those chromed tank panels (which might get rubbed by your knees), and even the pinstripes, which are coated stickers rather than paint, but finish quality generally seemed good.

For long-distance use you’d arguably be better off with the California Touring, whose price is £1000 higher than the Eldorado’s £15,635. But the newcomer can gain practicality with accessories including leather panniers, heated grips and GPS kit, as well as the screen and wind deflectors.

That price puts it up against the likes of Harley’s Softail, which has an inbuilt American glamour of its own. But the big Guzzi has its own unique appeal for those who prefer their Hollywood glitz with an Italian accent. And anyone who appreciates the way the Eldorado looks would probably like it even more when they rode it. 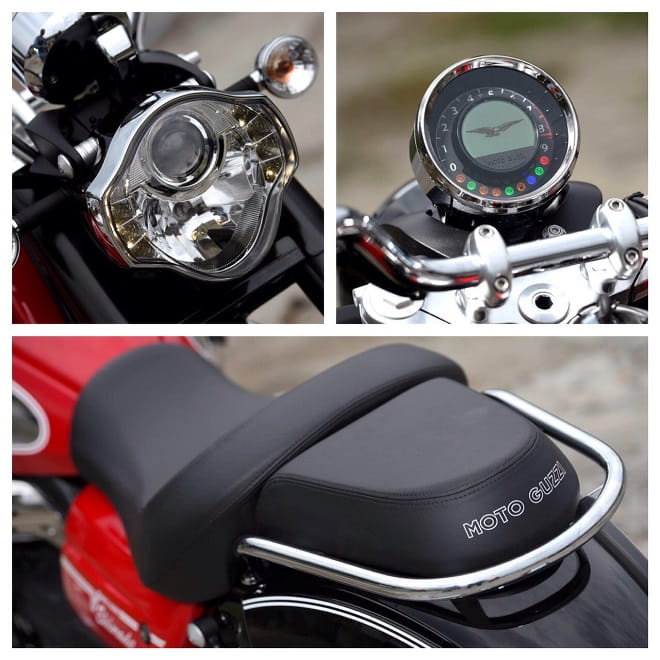