Rossi and Stoner to ride Goodwood Festival of Speed 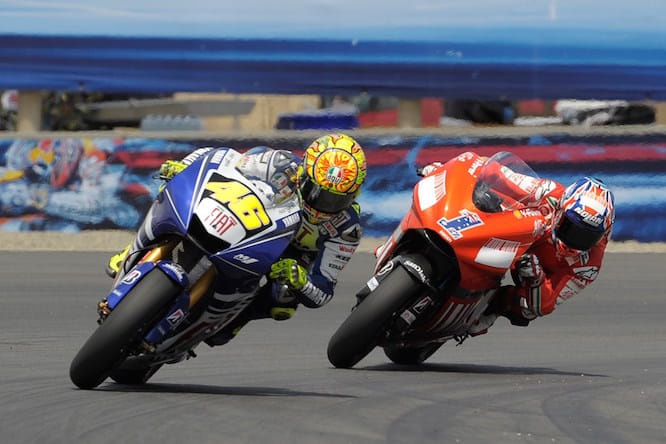 MotoGP stars Valentino Rossi and Casey Stoner will make an appearance at this year’s Goodwood Festival of Speed in June.

Stoner, who retired from MotoGP in 2012, is set to make his competitive return at this year’s Suzuka 8hr in July and will take to the iconic Goodwood hill climb circuit aboard a Honda RC213V MotoGP bike.

He’ll be joined by arch-rival and fans’ favourite, Valentino Rossi, who will fly straight to Lord March’s Sussex estate after competing in the Assen round of MotoGP to ride his Movistar Yamaha YZR-M1 up the hill. A big car fan, the Italian says he may take to the track on four wheels too.

“I’m very happy to attend the Festival of Speed at Goodwood this year”, said Rossi. “It will be my first time but I know the event pretty well. I have read so many stories about the Festival and I have also seen many videos. The atmosphere looks great. This event has the power to gather so many drivers, riders and motorsport VIPs and it is a great opportunity to have fun together.

“I’ll ride my YZR-M1 to celebrate Yamaha Motor’s 60th anniversary, but I might also drive a few cars… I would like to thank Lord March for inviting me. I am sure it’s going to be an incredible day and I look forward to being there!”

The pair will be joined by a whole host of other two-wheeled heroes, including 500cc Grand Prix world champions Kenny Roberts and Freddie Spencer.

This year’s Festival of Speed takes place between 28th and 29th June. More information, including how to buy tickets can be found here.