Top 10 Motorcycle Routes through the Alps 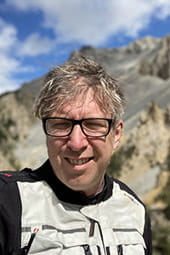 Author of the best-selling Bikers’ Britain series, former Bike staffer and RiDE editor, rode to Australia in 2019 on a Kawasaki Z1000SX, now runs a touring website at www.simonweir.co.uk 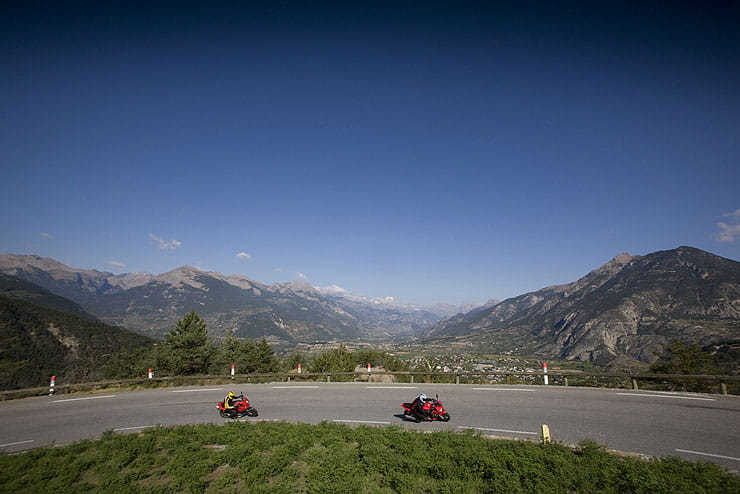 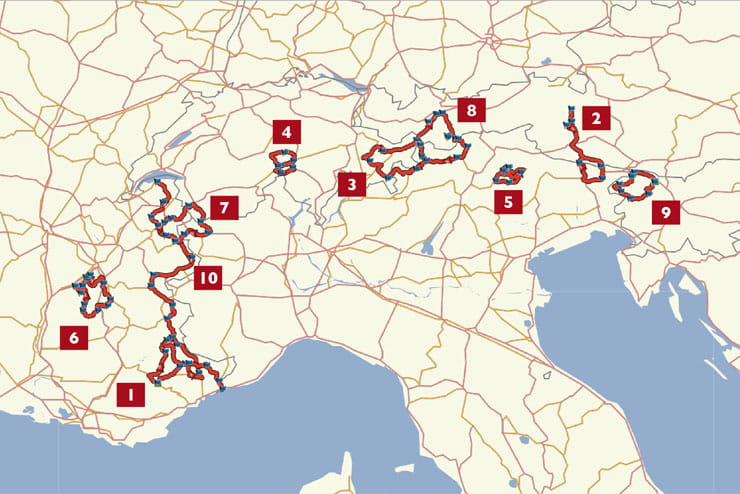 Above: Col de Vars in the French Alps on a sunny day  (Picture credit: Mark Manning/Bauer)

There’s nowhere on earth quite like the Alps. They’re motorcycle-touring heaven and once you discover them, it’s easy to get hooked. I’ve been visiting them obsessively for more than 20 years.

The Alps cover a massive area, curving round from Slovenia and Austria in the east to the Mediterranean coast on the French/Italian border. There’s so much to see and different areas have different characters, not least because exploring the Alps means exploring half a dozen countries.

What makes riding here so great is that there’s something for everyone. There are narrow roads, broad ones, even unpaved ones if you know where to look. There are towering peaks and shady gorges, relaxed runs down scenic valleys and steep climbs beside dizzying drops. Whatever you need in terms of riding and scenery is here.

Here are my ten top rides in the Alps, based around the key passes everyone should ride. 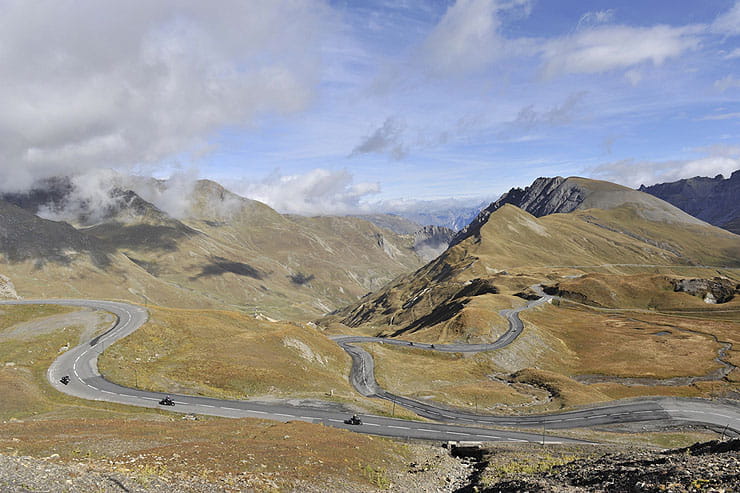 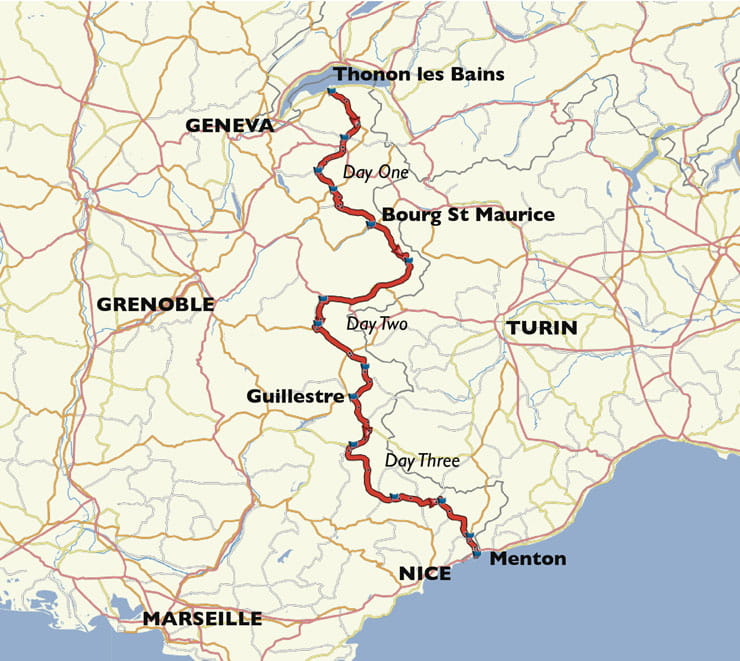 Above: Col du Galbier is one of France’s highest passes (Picture: Mark Manning/Bauer)

Where does it start? Thonon les Bains, France

Where does it end? Menton, France

Why is it great? If you want discover the Alps, there’s no better place to start than in France – and the natural place to begin is the Route des Grandes Alpes. It was created to attract tourists to the mountains, showing off their natural beauty. It works. It strings together a succession of spectacularly scenic and rewarding passes – including the highest actual pass in the Alps, the 2770m Col de l’Iseran.

What do I need to know? This route takes two and a half to three days to ride. Timing is key with all Alpine rides. Many of the highest passes on the Route des Grandes Alpes – Col du Galibier and Col de l’Iseran – are likely to be shut until early or even mid-June.

Anything else? Check the Tour de France schedule in July and make sure you’re not there within a week either side of it. The Alps get busy in August, especially the Route des Grandes Alpes. The best month to ride this route is September. 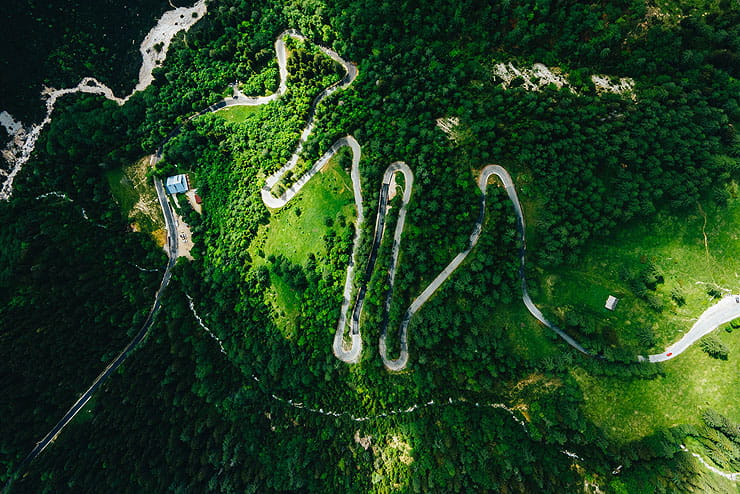 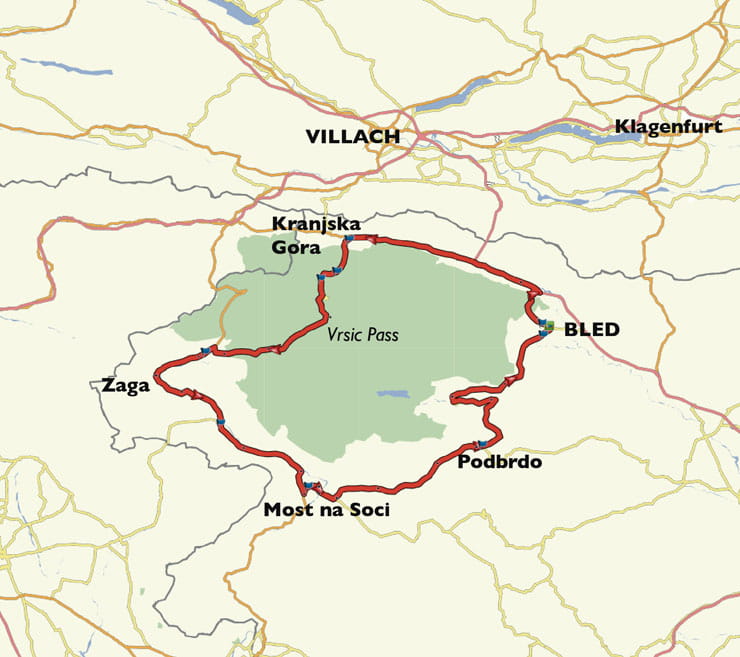 Above: Slovenia’s Vrsic Pass is awesome… but watch out for those cobbled hairpins (Picture: Mihar Rekar/Unsplash)

Where does it start? Bled, Slovenia

Where does it end? Bled, Slovenia

Why is it great? Slovenia still feels slightly undiscovered, though the lakeside town of Bled is a bit of a hip tourist magnet. This 120-mile route loops out into the mountains to climb the 1611m Vrsic Pass – the highest pass in the country. It’s quiet, beautiful and a fantastic ride.

What do I need to know? The surface can be questionable: from fabulous fresh tarmac for most of the route, the pass itself sees a blend of immaculate asphalt, cobbles – including on a good number of the hairpins – and one or two rougher patches. Exercise a bit of restraint – especially on the cobbles if it’s wet.

Anything else? These mountains were fiercely fought over in World War One. One of the must-see sights on the Vrsic pass is the Russian Chapel, built by the soldiers who fought on these slopes. 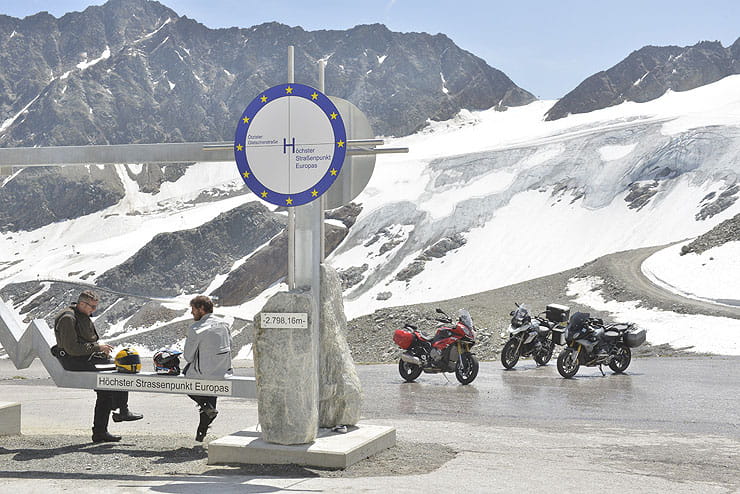 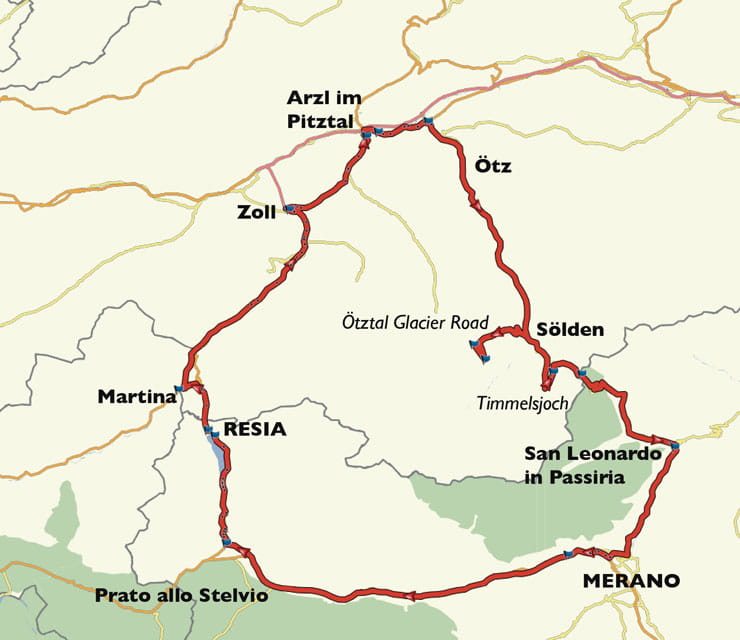 Where does it start? Resia, Italy

Where does it end? Resia, Italy

Why is it great? Timmelsjoch is an amazing pass: great surface, bends and nicely quiet, as larger vehicles are banned from using it. This loop has an added bonus: a detour to the Otztal Glacier road (as seen in the aeroplane chase in the Bond film Spectre) which is a dead end, but at 2830m is the highest paved road in Europe.

What do I need to know? Both Timmelsjoch and Otztal have tolls – as does the Austrian motorway (which this route avoids: if the sat nav wants to get on it, don’t…) Austria has a 95dB noise limit for bike exhausts.

Anything else? The eagle-eyed will have spotted that when the Austrians built a "Europe’s highest road" arch on a parking area, they put on – with touching honesty – a placard displaying its actual height… which is lower than several other famous roads (see Route One). The actual highest bit is at the end of a tunnel on a spur road, where it’d be dangerous to have tourists stopping for pictures. Don’t worry: the route does go there. 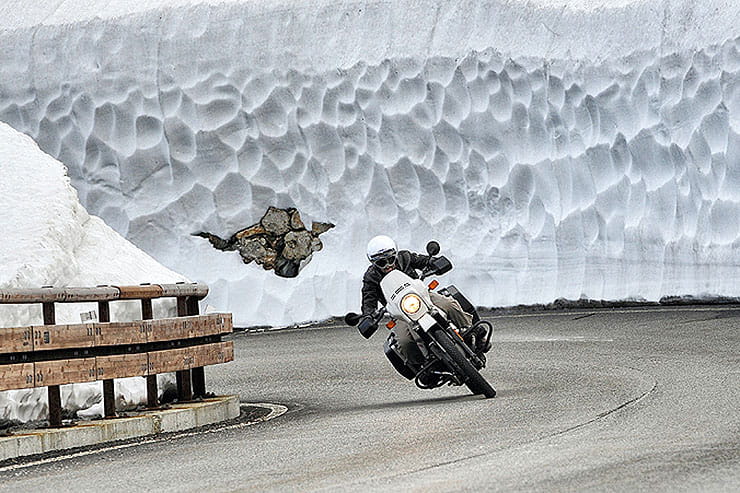 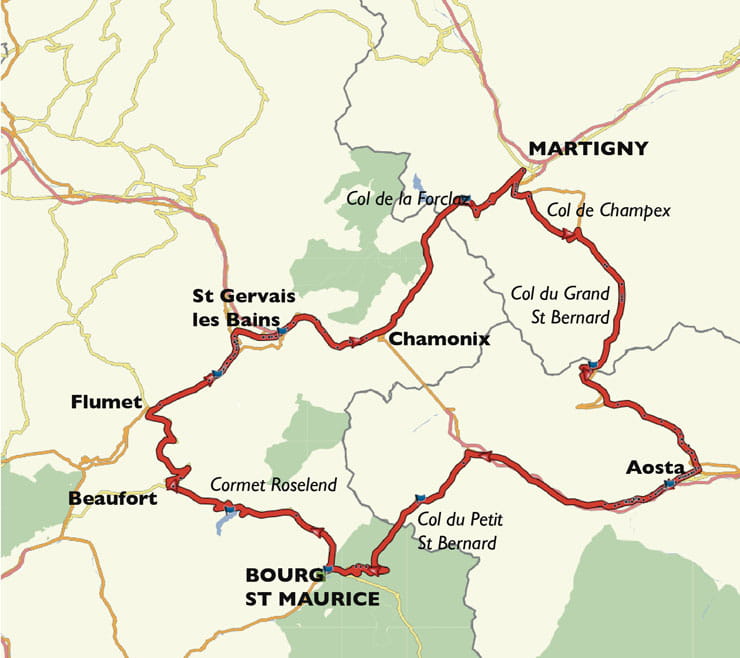 Above: Don’t bother heading to the high alps before June… Even then, there can be snow walls on the Grand St Bernard and other passes (Picture: Mauro Paillex/Unsplash)

Where does it start? Bourg St Maurice, France

Where does it end? Bourg St Maurice, France

Why is it great? This is one of the great, well-known Alpine routes – famous because the roads are awesome, the scenery is stunning and it hops through three countries using both the Grand St Bernard Pass and the Petit St Bernard Pass.

What do I need to know? While the St Bernards aren’t on France’s Route des Grandes Alpes, the stretch from Bourg St Maurice to Flumet (over the stunning Cormet Roselend) is – but this route uses it in the opposite direction to Route 10. Why not do both?

Anything else? Just take care going into Switzerland: the route doesn’t go on any motorway (which requires an expensive vignette toll sticker). If the sat nav wants to get on one, you’ve missed a turn… 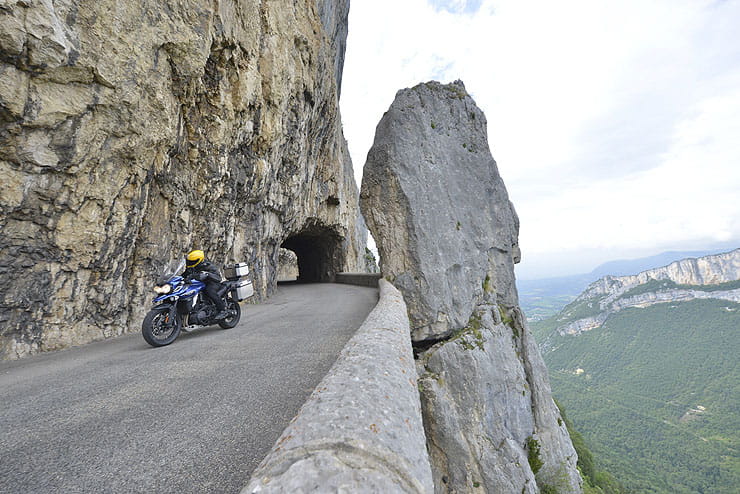 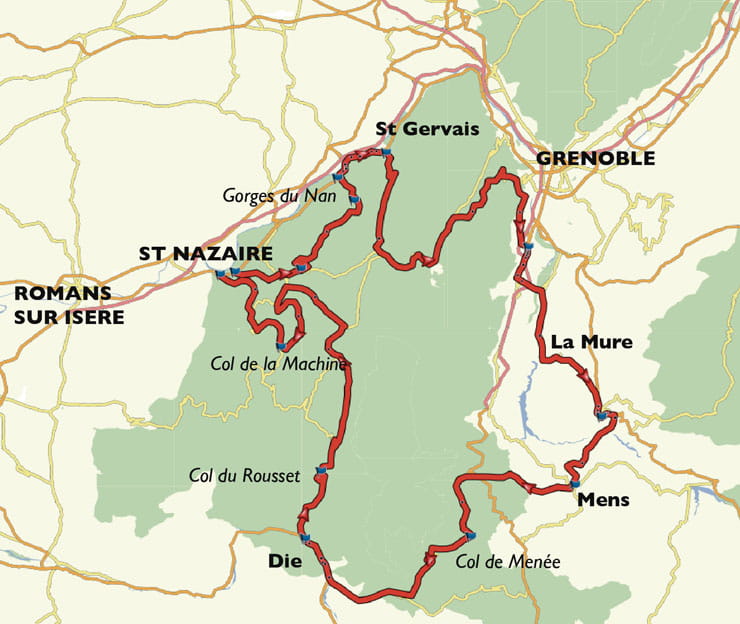 Above: Discover the balcony roads of the Vercors (Picture: Mark Manning/Bauer)

Where does it start? St Nazaire en Royans, France

Where does it end? St Nazaire en Royans, France

Why is it great? The Vercors is one of the quietest corners of the French Alps. Towering peaks and sheer gorges are crossed by balcony roads – sheer rock on one side and a huge drop on the other. The most famous of these is Col de la Machine, but our route takes in several more.

What do I need to know? As this route skirts the edge of Grenoble, you’ll need a Crit Air sticker for the bike. To be on the safe side allow six weeks to order one

Anything else? As well as the balcony roads, this route uses a little bit of Route Napoleon before heading into the quite hills over Col de Menee and the hairpin-heavy Col du Rousset, which is like a laid-back Stelvio. 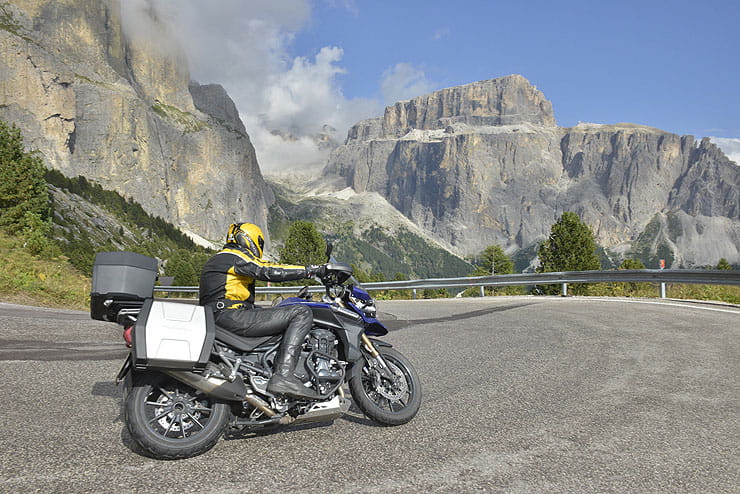 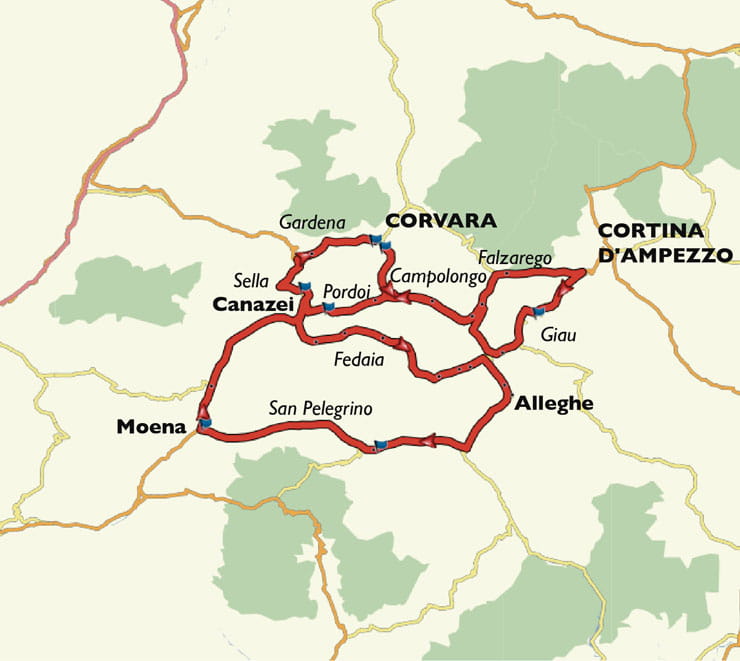 Above: The Dolomites might be Europe’s most beautiful mountains. This is Passo Sella (Picture: Mark Manning/Bauer)

Where does it start? Corvara in Badia, Italy

Where does it end? Corvara in Badia, Italy

Why is it great? The Dolomites just might be the most beautiful part of the Alps, all towering grey peaks above lush green slopes. They’re well dotted with cafes and villages and criss-crossed by amazing roads. One of the most famous routes is the Sella Ronda – the four passes surrounding a particularly eye-catching set of mountains.

What do I need to know? The four key passes as Gardena, Campolongo, Sella and Pordoi (the highest in the Dolomites, with the most hairpins). This route extends to take in Falzarego, di Giau (my tip for the most beautiful of all), Fedaia in the shadow of the Marmolada, the highest mountain in the range, and San Pelegrino.

Anything else? The Dolomites are crazy busy in high summer. Best to go in mid-September or even early October. They’re hot on speeding in villages, with plenty of speed cameras. 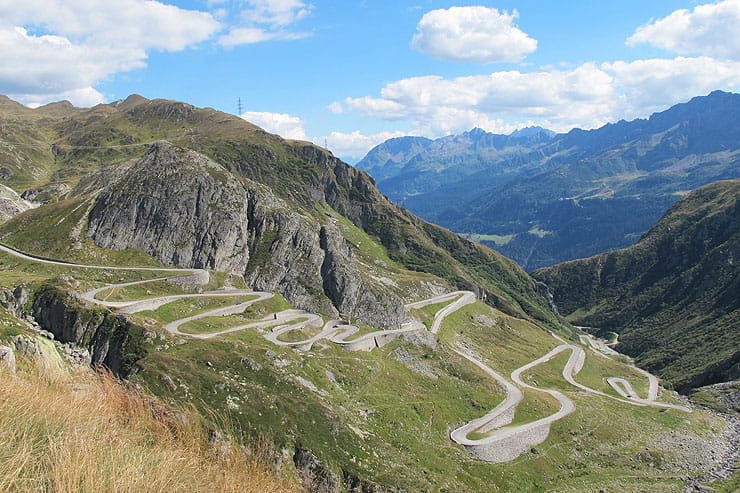 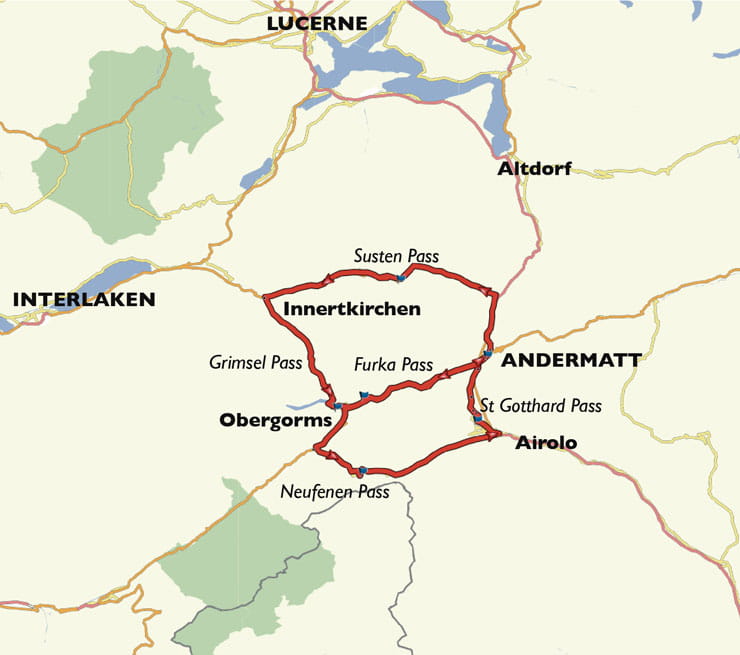 Above: The Tremola (Old St Gotthard Pass) taken from the modern Highway 2. What you can’t see from here is that it’s cobbled…  (Picture: Simon Weir)

Where does it start? Andermatt, Switzerland

Where does it end? Andermatt, Switzerland

Why is it great? There isn’t an average mile on this well-established and popular route. Every inch of it is outstanding – with amazing views, sublime roads with excellent surfaces (ahem, see below) and wonderful coffee-and-cake stops. It can be incorporated into longer touring routes or treated as a relaxed day in its own right.

What do I need to know? There are three options for the St Gotthard Pass: the motorway tunnel is out (boring!); Swiss Highway 2 is swooping, half carved into the cliff in a gallery (alright if it’s raining); but the old pass, the Tremola, is the one to ride (it’s the one in the pic). The only catch is it’s cobbled from top to bottom. It’s easier as a climb and in the wet, you might want to take Highway 2…

Anything else? The central bar of this figure-eight route is Furka Pass, which famously appeared in the Bond film Goldfinger. Running the passes in this sequence means you get to ride it once in each direction. 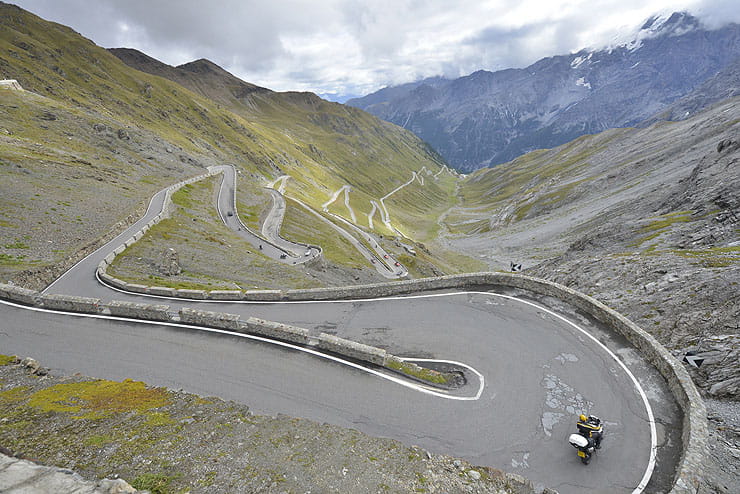 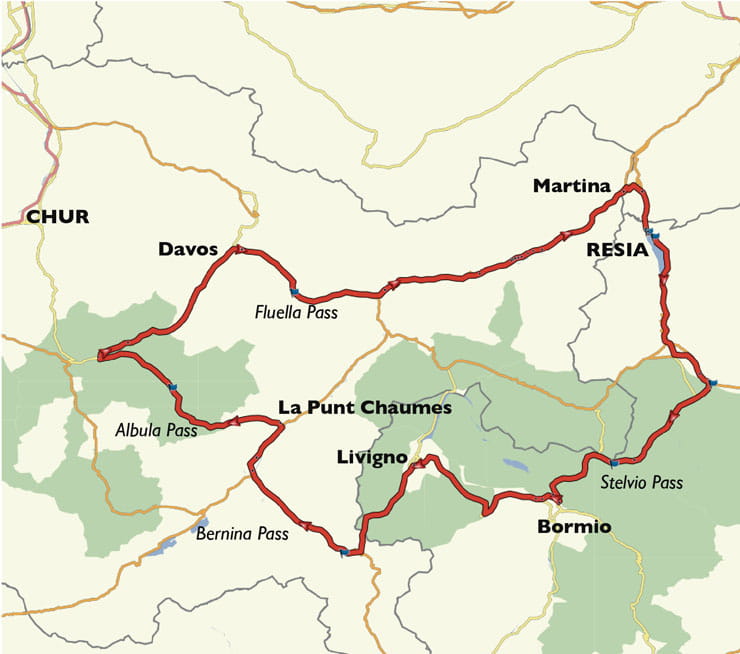 Above: Stelvio Pass divides opinions, but you have to experience it  (Picture: Mark Manning/Bauer)

Where does it start? Resia, Italy

Where does it end? Resia, Italy

Why is it great? Stelvio Pass is one of the greats. It’s Italy’s highest, with 48 hairpins on either side of the mountain. It is a long and demanding pass to ride, but getting a smooth run though the sequences is of hairpins is sweet. Even if you’re cruising, it’s a fabulously scenic pass – just a spectacular place to visit.

What do I need to know? It’s a popular, busy pass. Try to avoid riding it at the weekend – and getting there before 10am is definitely recommended. This route lets you do that, then moves on into Switzerland for more great riding.

Anything else? When the old Top Gear tried to drive supercars over Stelvio, they couldn’t cope with it and preferred the Fluella Pass… also on this route. Some riders still agree with Clarkson and don’t get on with Stelvio, but I love it. This route is set up so you can ride this on one day and the Timmelsjoch route (No8) the next. 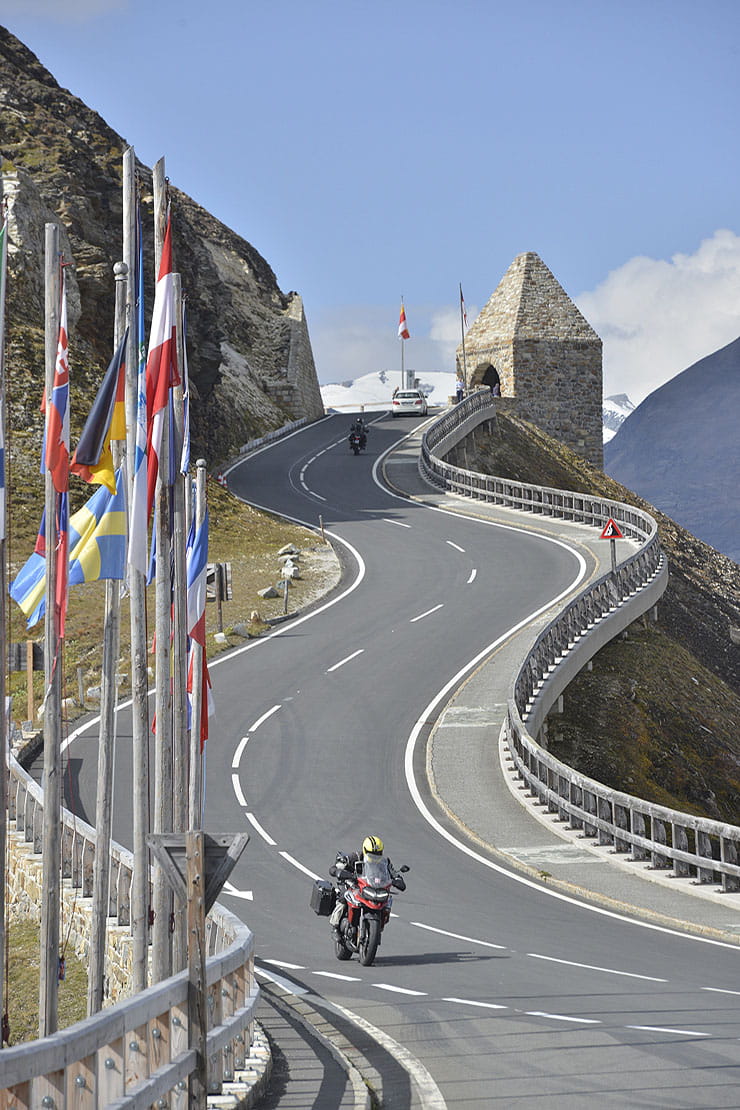 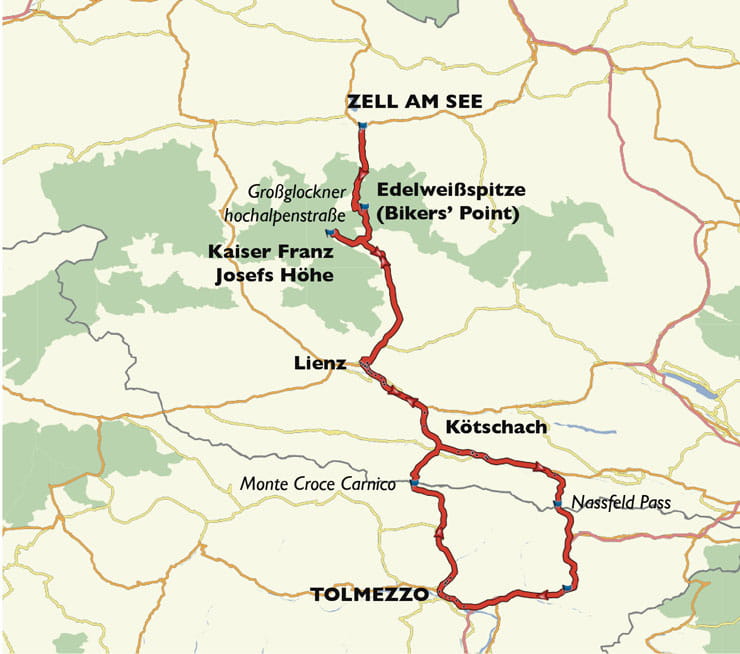 Above: The Grossglockner was built for riding. Don’t let the toll put you off (Picture: Mark Manning/Bauer)

Where does it start? Zell am See, Austria

Where does it end? Zell am See, Austria

Why is it great? The Grossglocknerhochalpenstrasse – the Grossglockner high alpine road – was built to be great to drive (the day after it opened in 1935, it was used for a race). It flows sympathetically, is immaculately maintained, has great stops for coffee and it’s beautiful. Weeble, my trusted photographer, described it as the most spectacular of all the passes I’d dragged him round… Just watch out for the cobbles on the way up to Edelweiss-spitze, the Bikers’ Point.

What do I need to know? It’s an expensive toll, but you can enter and leave as necessary. It gets busy in the middle of the day, so if you want a quiet run, get there before 10am or after 4pm. This route is designed to let you ride it twice, in the quieter periods.

Anything else? This route heads down to Italy, crossing the scenic Nassfeld Pass and returning over the steep, hairpins-in-tunnels Monte Croce Carnico passes. Also remember: Austria has a 95dB noise limit on bike exhausts: no loud cans… 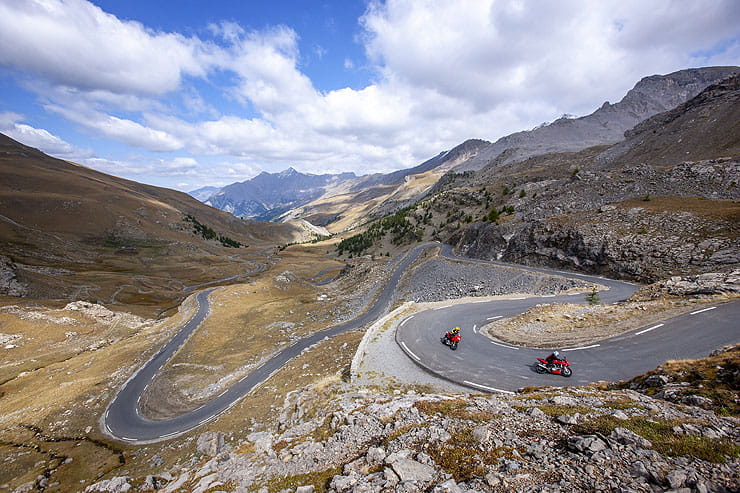 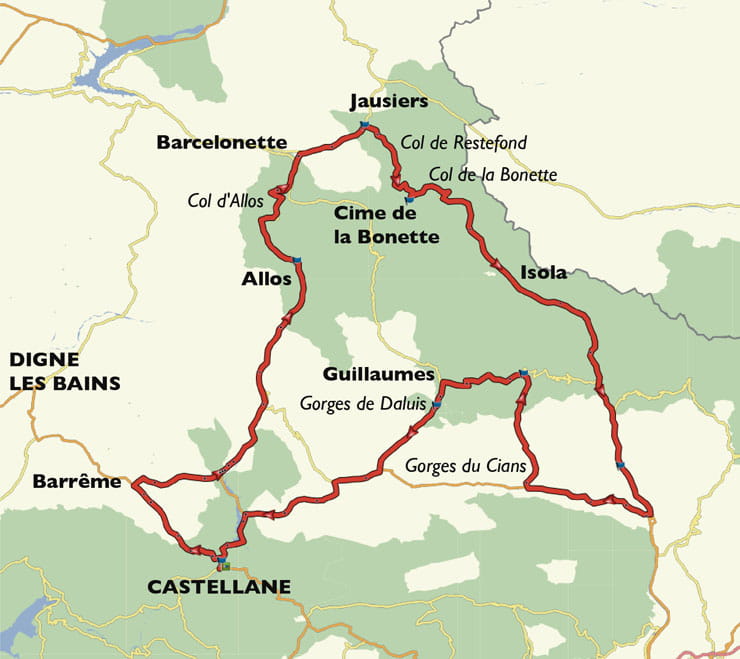 Above: Col de la Bonette – but every mile on this route is as exciting as this (Picture: Mark Manning/Bauer)

Where does it start? Castellane, France

Where does it end? Castellane, France

Why is it great? This route has everything that’s great about riding in the Alps: famous passes, spectacular gorges, flowing valley roads and amazing scenery from start to finish.

What do I need to know? The focus of the route is the 2715m Col de la Bonette and the loop around the peak, the Cime de la Bonette, which – at 2802m – is France’s highest paved road and the loftiest non-dead-end road in Europe.

Anything else? It also includes the quiet, often-overlooked Col d’Alos, the spectacular Gorges du Cian and Daluis, plus the amazing N202 and (for my money) the best stretch of Route Napoleon. It’s a perfect day in the mountains.