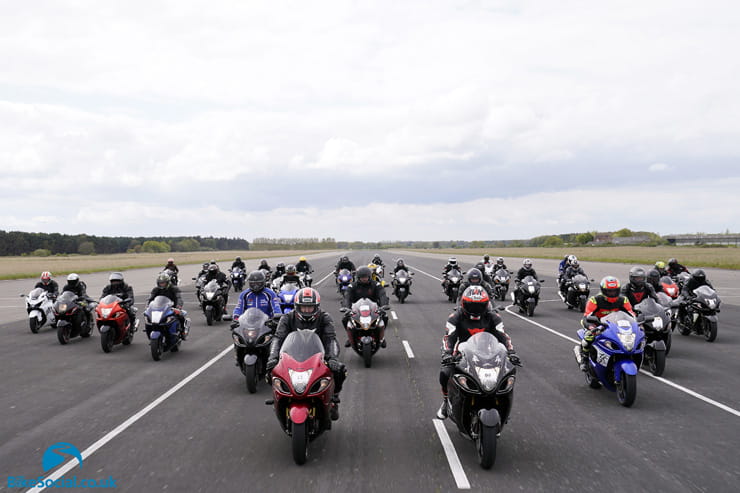 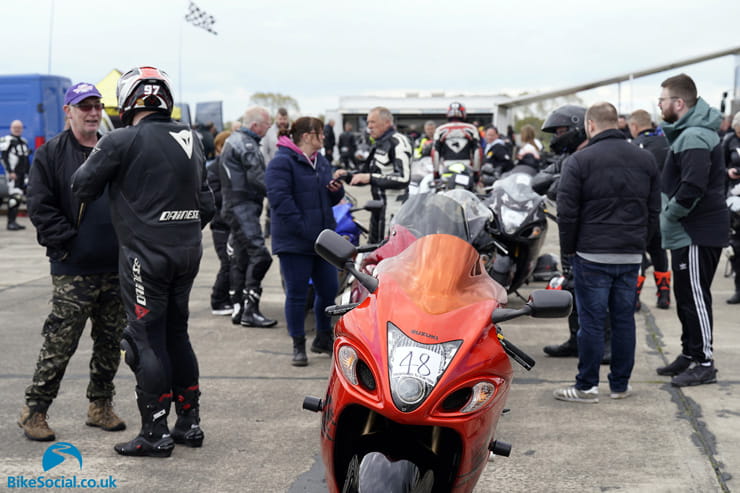 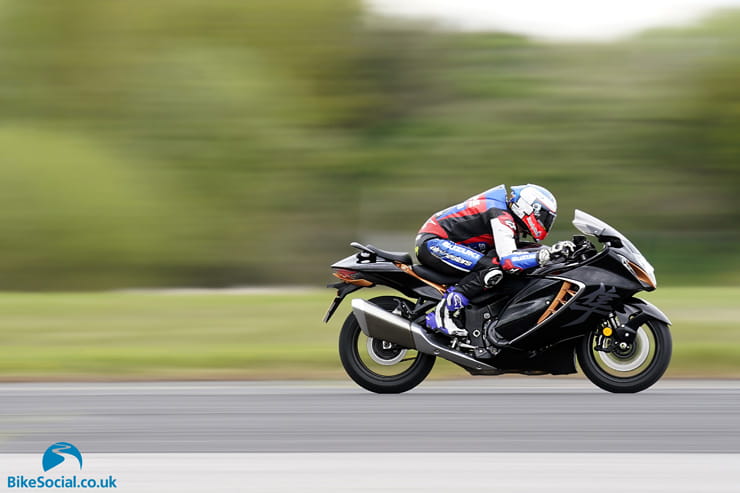 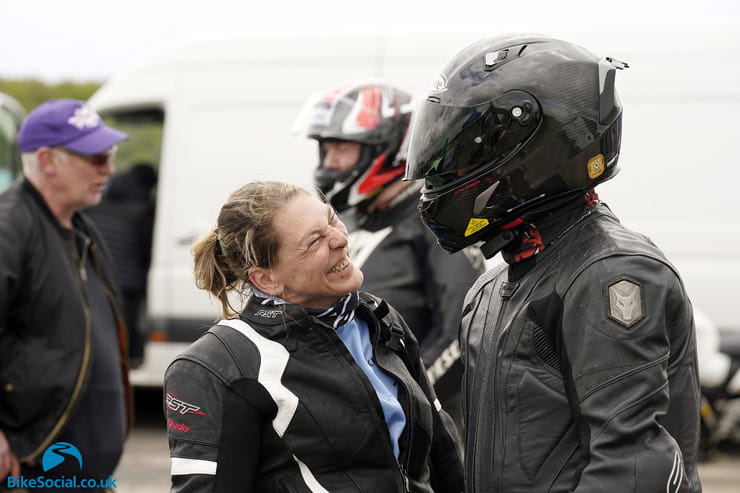 Wind whistles eerily down the length of the 1.8-mile strip of tarmac, gusting from right to left, tousling a lone windsock, whipping between railings and rustling the long grass. A straggly flock of crows helter-skelter on the breeze, tumbling across the sky beneath scudding grey clouds. Not a soul, not a sound. Runways are weird places when they’re empty and there’s no-one around; silent spaces full of flat nothingness, a void waiting to be filled by mechanical mayhem.

This is Elvington Airfield, a few miles south of York. Once an RAF base, it was extended to its current near two-mile length by the US Air Force in the 1950s – but it was never used by the USAF and Elvington was closed by the RAF in 1992. Today, Elvington is the last surviving full-length runway in the UK open to motorsport – and, specifically, the business of going flat-out in a straight line.

And if there’s one bike renowned for going flat out in a straight line, it’s Suzuki’s Hayabusa. A living legend, the Busa started setting top speed records in 1999 – and, in its third generation 23 years later, it still is. Famed in straight-line performance circles (ahem) for its bomb-proof motor, Suzuki Hayabusas have been tuned, turbo’d, big-bored, supercharged and squirted with nitrous up to 600bhp plus in search of timing-light glory. And while there’s of course much more to the Busa than big numbers and bolt-upright brawn – they’ve been toured all over the world, taken on track days, used as stunt bikes and even as commuters – there’s no escaping its iconic image as the bike on which to bend dynos and rip-up timing lights. If there’s a land speed record on two wheels, chances are a Suzuki Hayabusa holds it. 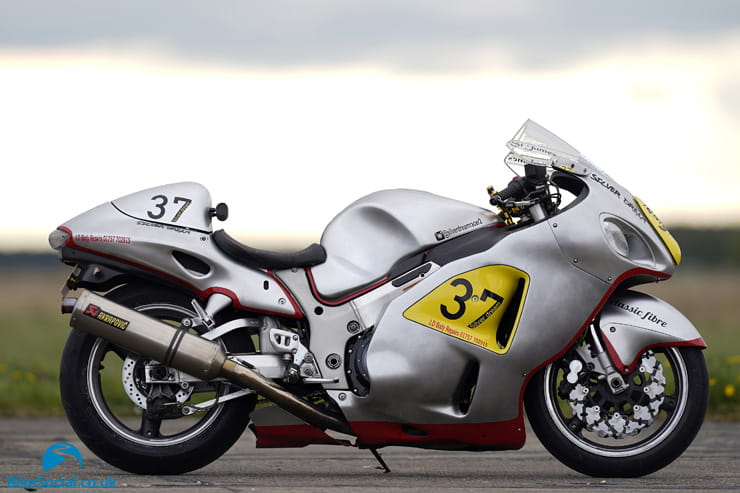 Now in its third generation, the Hayabusa has managed the neat trick of evolving – the latest model is populated with modern electronics and meets emissions regs – but still remaining true to its original premise. It’s a long, low, sleek missile of a thing, in a way you won’t find with any other new bike – at once modern, yet somehow a reminder of a time when bikes were big, fast and lairy. 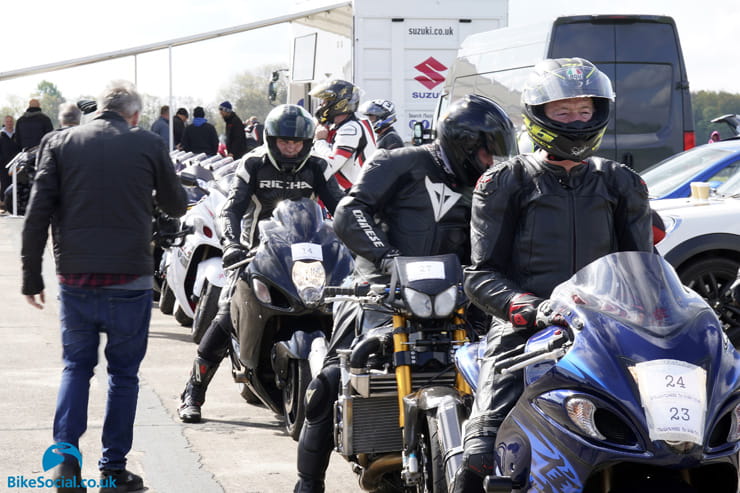 So why are we all at Elvington?

The Hayabusa is a cult bike, building a legion of fans over the years. Such a loyal fan-base deserves recognition: and if the 2022 Busa is all about the big numbers, why not give owners of all Hayabusas a chance to come to the last place in the UK where it’s possible to legally max one out, and, er, max it out?

Which is why Bennetts BikeSocial have teamed up with Suzuki GB to give Hayabusa owners the chance to ride their bikes at Elvington. For the princely sum of free to Bennetts customers and BikeSocial Members, the premise is simple: turn up, register, ride your Hayabusa flat out, as often as you like. 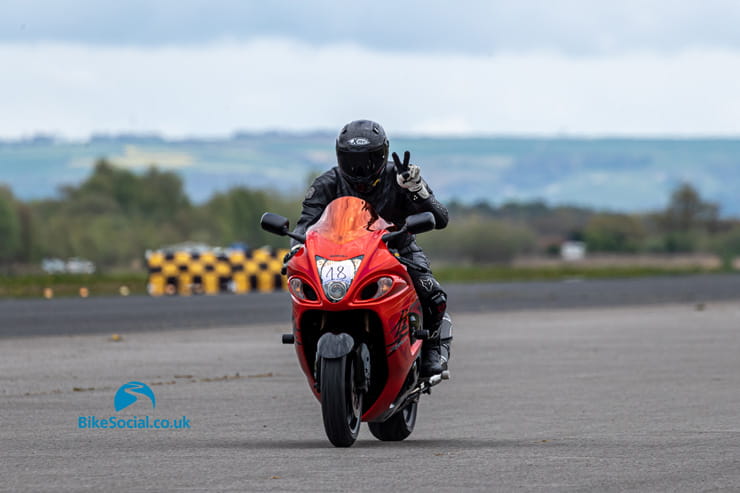 UK top speed club Straightliners, who regularly run events at Elvington, are on hand to help out and manage the speed testing, with timing lights set at half mile and mile intervals (a lot of the faster turbo or supercharged bikes will crack 200mph in a mile, so they need the remaining length of the runway to brake!). Each rider is given a number, joins a queue and moves into place at the start line, then completes their run. When they get back to the pits area, they can join the queue and do it all over again. 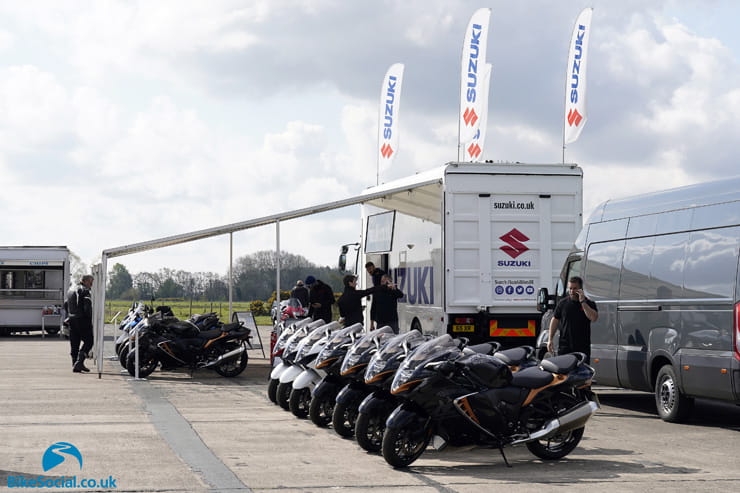 Suzuki GB have also come along, armed with a fleet of Gen 3 Hayabusas available for a demo ride – anyone is free to literally turn up, hand over a fiver, and get a go on a brand new Hayabusa down the runway. It’s an insane offer. Suzuki have also brought along some big-name British racers to have a go too – Buildbase Suzuki rider Christian Iddon and Suzuki World Endurance rider Danny Webb are shooting it out to see who can go fastest on the Busa. 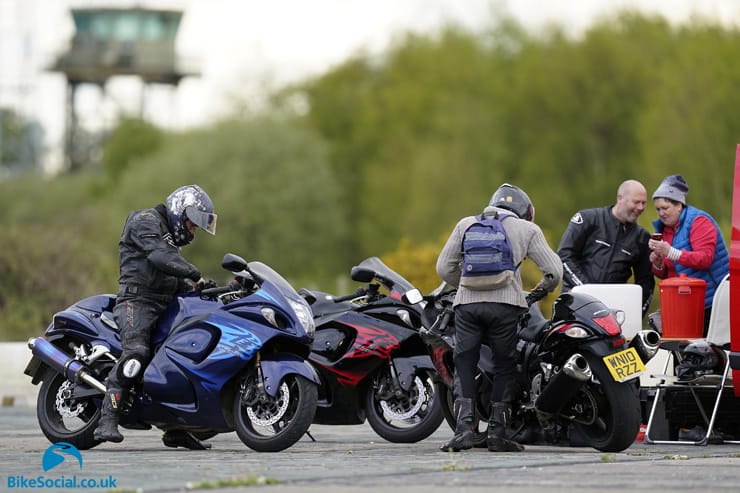 Elvington’s gates have barely been open a few seconds when the Hayabusas start rolling in. Gen 1s, 2s and 3s, some two-up, some obviously highly modified, work their way to the paddock holding area for signing on. A few come in the backs of vans – these are the dedicated top speed bikes – mostly street legal, but not exactly cut out for road work so we’ll give them a free pass.

The holding area fills up – eventually there are over 50 Hayabusas; it’s hard to tell as bikes come and go all day. It’s that kind of atmosphere; relaxed, chilled out, none of the nervous energy you sometimes get on track days. Everyone is having a good time and the weather holds fast; chilly but never looking like rain. 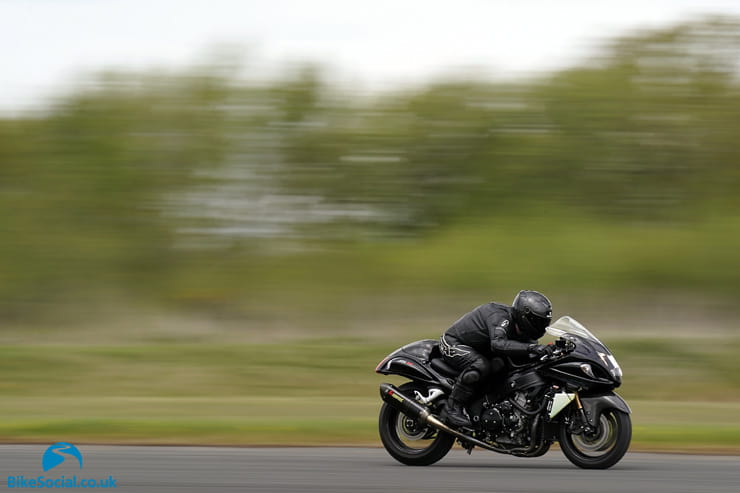 And the variety of Busas on show is remarkable – everything from world speed record holders to bog standard bikes. There are long swingarms, the tell-tale stubby exhausts of big turbo engines, trick suspension, all manner of crazy modifications and bodywork. As the day goes on, the runway rings to the sound of screaming Hayabusa motors. One bike, belonging to Colin Ruddock, sheds a fairing panel halfway down the runway. He keeps trying though, and nabs a top speed of 190mph. 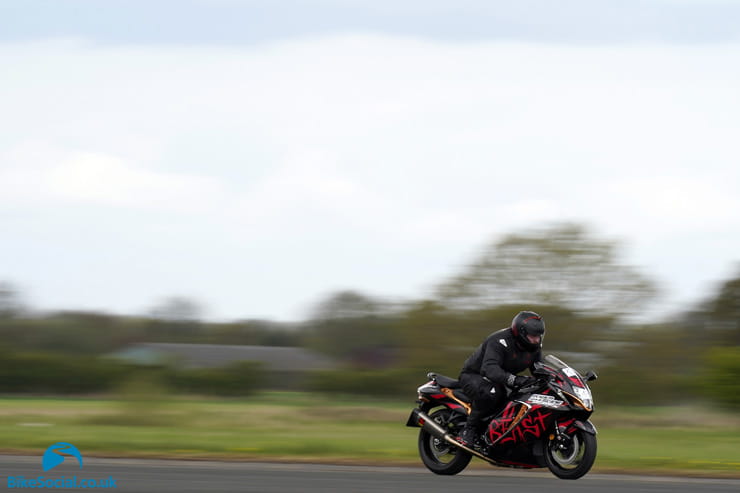 Above: The Beast on a beast

Eddie Hall, the World’s Strongest Man 2017, has brought his Hayabusa along for a blast. He manages a creditable 163mph, but to be fair he’s not the most aerodynamic physique – Eddie’s a lot of geezer to fit behind a Hayabusa fairing and keep out of the wind. He has a good time trying though. 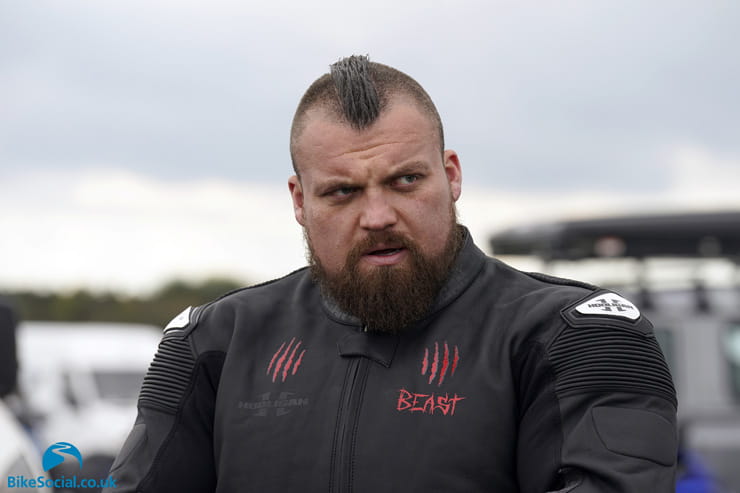 Getting a good top speed isn’t as easy as it looks – you’d think all you have to do is open then throttle and hang on, but there’s more to it; even on a Hayabusa you have to keep every limb folded in out of the airstream – including your head. It’s not easy to cram your chin into the tank and still see where you’re going. 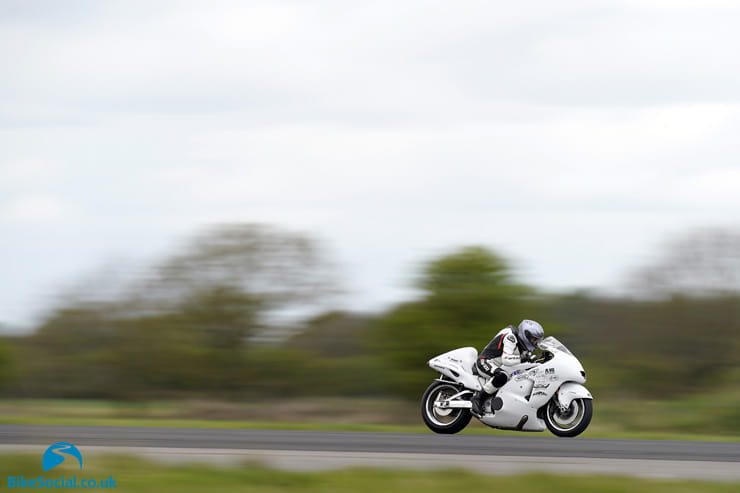 The World’s Fastest Woman on two wheels, Becci Ellis, is here on her home-tuned Gen 1 turbo Busa. She’s more the ideal shape to set speed records – small, light and able to fold up into a racing crouch. She holds the record at 264.1mph, set in better conditions than today. She still manages a hair-raising 190mph. 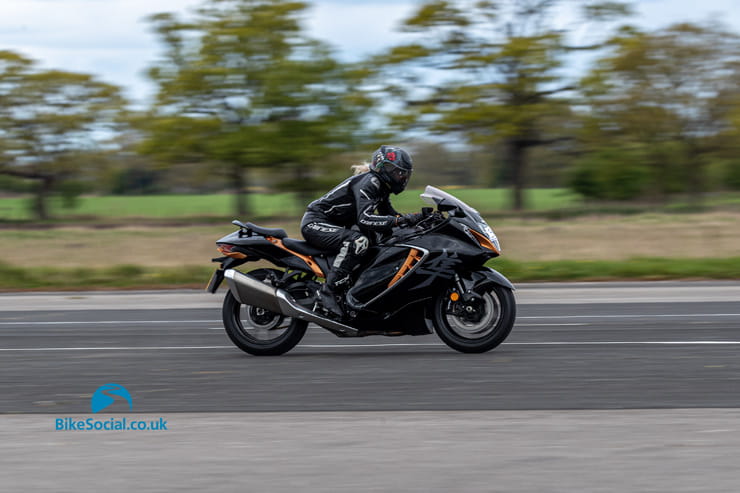 Plenty of people turn up to try out Suzuki’s fleet of Hayabusas – and one of them, Helen Gibbs, surprises herself by setting a speed of 174.4mph. She’s faster than many of her Hayabusa-owning colleagues, and only 5mph slower than Buildbase Suzuki BSB star Christian Iddon! 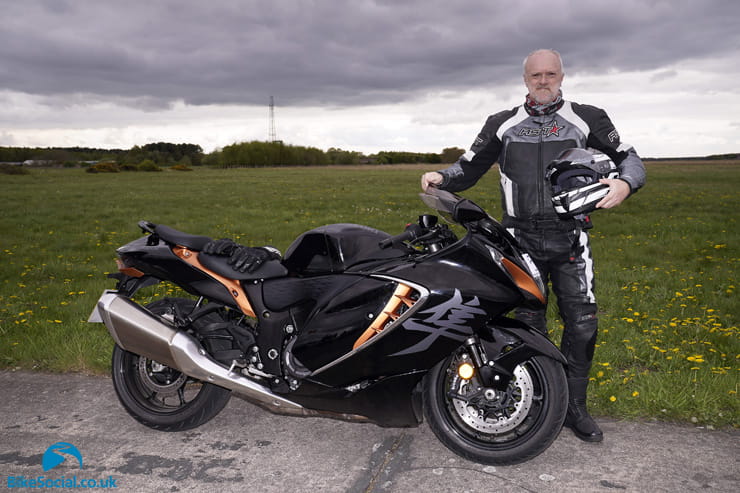 “I normally ride a Ducati Diavel, but I’ve come here for a test ride on the new Hayabusa. So far I’ve done just on 160mph over the one mile. It’s not quite flat out, but I’ll be having another go to get faster. I absolutely love it, really love it! Really impressed with the bike – it’s so different compared to the Diavel it’s taking me some time to get to know the Busa and how to use it. But it feels faster than the Ducati! It’s exhilarating – when there’s nothing to stop you going as fast as you want to, there’s no other feeling like it.” 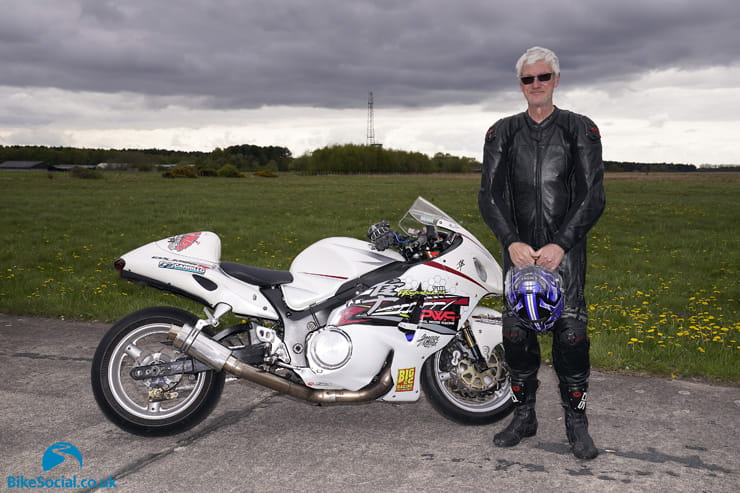 “I’ve come here on my Busa – it’s a Gen 1, turbocharged by Bigg CC, lock-up clutch, Carillo rods, AMS1000 computer controlling boost, it’s making around 500bhp. I regularly run with Straightliners – I’ve done 215mph on me sighting run this morning. I know where I’m going! My Busa runs better now than it did as standard – it’s smooth, reliable, you can get the horsepower with it blowing up.” 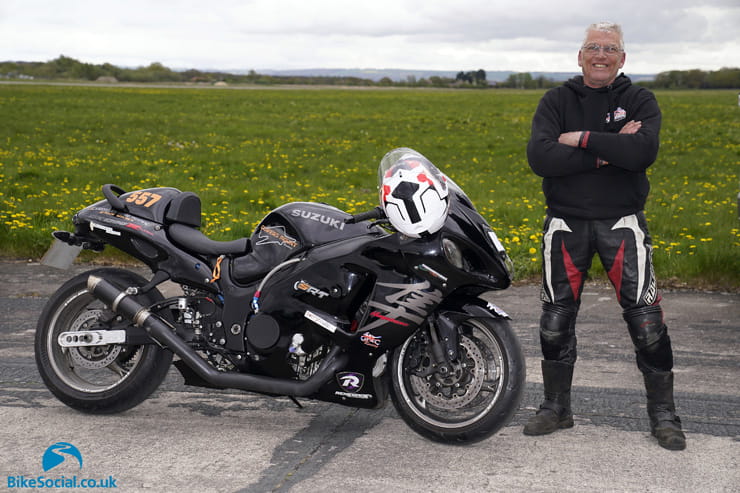 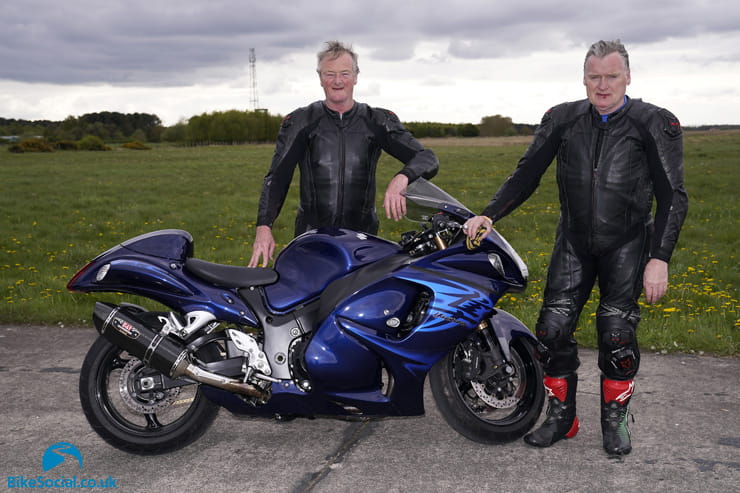 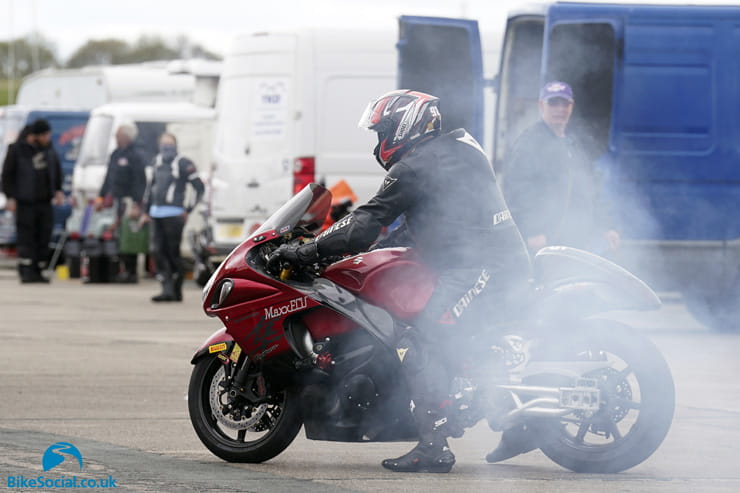 Best speed of the day is set by Alan Stubbs on his turbo Gen 2 Busa. 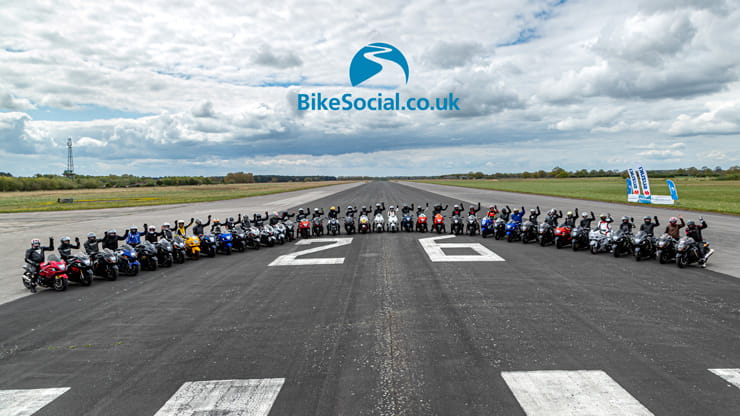 As the dying echoes of 50 Hayabusa engines fade, giving Elvington’s airspace back to the crows and wind, it’s clear the Suzuki still holds a place close to the heart of motorcycling, and to a special breed of rider in particular. There’s a sense of old-school dedication to the art of fast; the ‘wottleitdo mister?’ club of riders who’ll never grow tired of asking the question – and seeking the answer. Maxing out our bike is an ancient rite of passage we all go through as kids – and it’s good to see some of us haven’t lost that innocent sense of wonder. And it’s also good to see Suzuki still cater for it. Long may the Hayabusa continue.