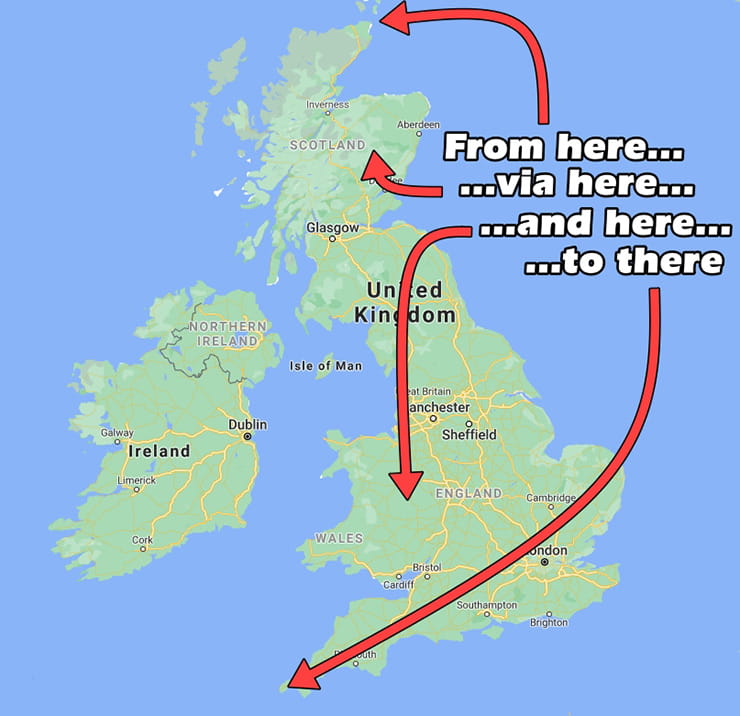 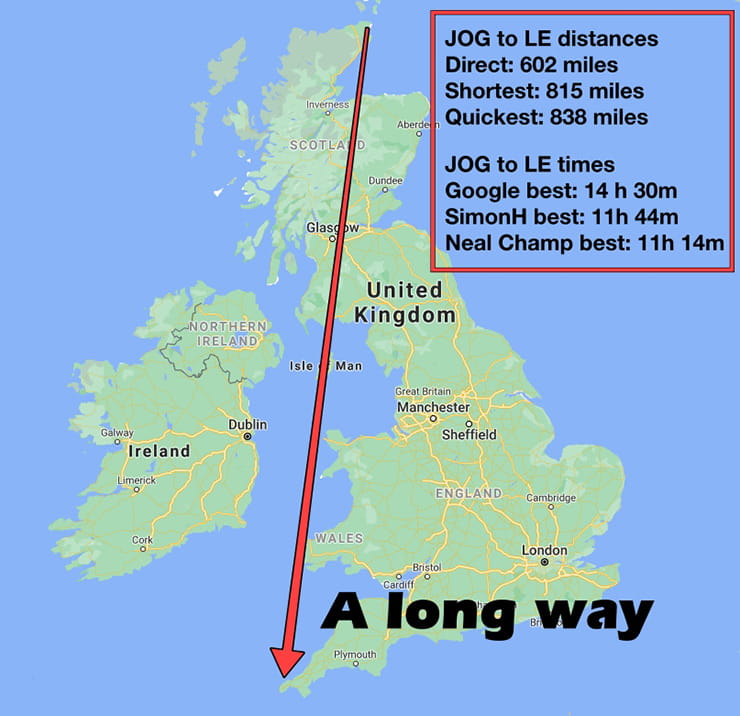 How To Ride From John o’ Groats To Land’s End

John o’ Groats is a small, unspectacular village perched on the north-western tip of Caithness in Scotland. A loose collection of windswept houses, B&Bs, hotels, harbour, café and souvenir shops, it once won an award as Scotland’s Most Dismal Town (locals refused to accept it). Glamorous it is not, but the Travel Together hotel is nice.

Diametrically opposed, at the south-western end of the country, is Land’s End – another hotel, more souvenir shops and a café. Both locations are marked with a signpost, each pointing to the other.

Although there are more northerly and southerly points – Dunnet Head in Scotland and Lizard Point in Cornwall – the distance between JOG and LE is the greatest between inhabited points on mainland UK. And the trip has become something of a cause célèbre for fans of endurance: JOG to LE has been walked, run, cycled, tri-cycled and driven in a variety of vehicles, often for charity. And, of course, it’s been ridden by motorcycle. Lots of them, often for charity – check out www.thelongestdaydownchallenge.co.uk – an annual event (Covid-permitting) for bikes costing less than £300. 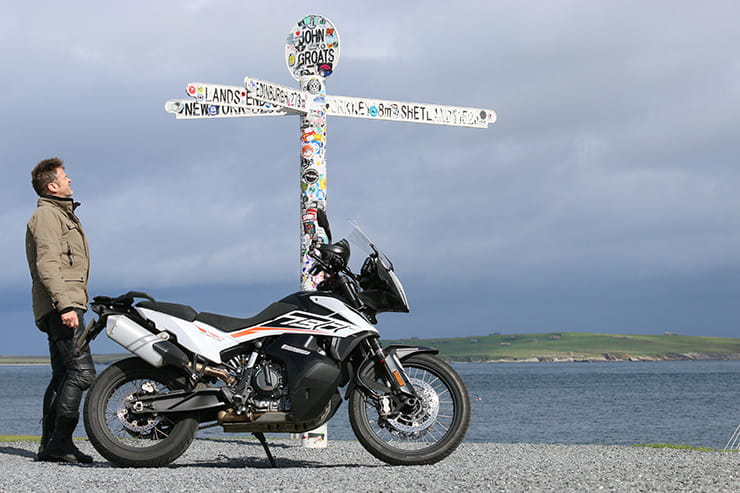 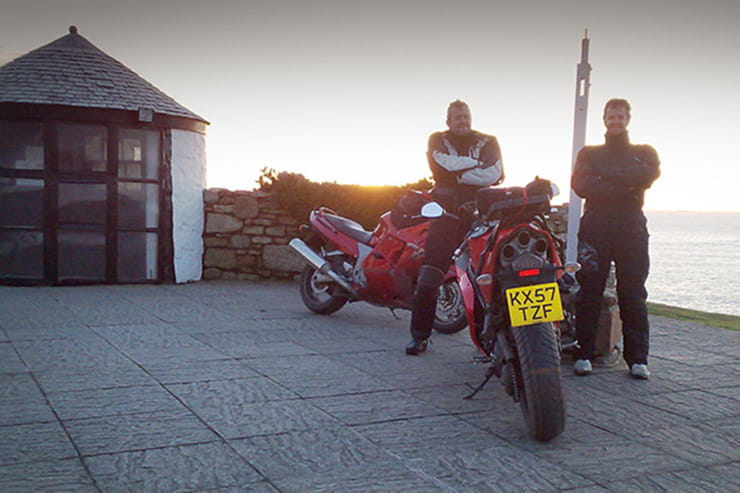 How far is it?

The shortest road distance between JOG and LE is around 815 miles, and takes in a slice of Shropshire hills as well as crossing several towns and cities. The signposts at each end say the distance is 874 miles, but this is thought to be for the benefit of cyclists as it’s the shortest distance that doesn’t include motorway. However, several cycling websites with entirely too much time on their hands have Google Mapped the minimum non-motorway distance to be nearer 866 miles. That’s cyclists for you. 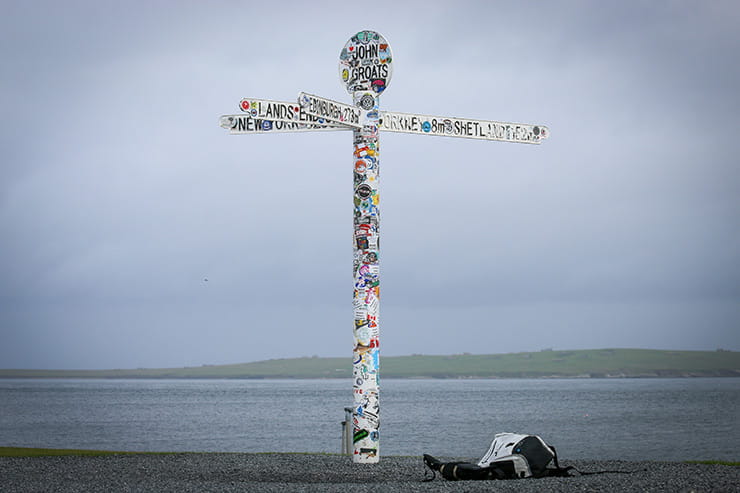 How long does it take?

Google says the quickest route covers 838 miles and takes between 14 and a half to 15 hours depending on traffic. The quickest actual recorded (or claimed) time was set by Neal Champion on a Kawasaki Z750 Turbo in 1984, in 11 hours 14 minutes – his distance was 884 miles, giving him an average speed of 78.7mph.

In 2006, yours truly made the run in 11 hours 44 minutes on a BMW K1200S, covering 846 miles and averaging 72.6mph. Although my attempt contained no especially egregious speeding (can’t speak for Neal), the subsequent adoption of average speed cameras across the country (especially on the A9 in Scotland) have made an improvement on these times unlikely. So don’t try it.

This is the real reason to ride from JOG to LE, not go setting records. At 938 miles, the scenic route is only 100 miles longer than the quickest, but it takes another 10 hours to complete – so that makes JOG to LE a good three-day ride. I’m not complaining about an extra couple of nights in a pub, are you?

And this route is also a good ride full stop – the quickest route sticks to motorways as much as possible, and is easy to describe: A99, A9, M80, M73, M74, M6, M5, A30. That’s only eight different roads – and they’re very, very dull. The only conceivable reason you’d take that route – which I have, twice – is because it’s a bucket list challenge, or you’re being paid to write about it (which I was). Or… I can’t think of another reason. Ask Neal Champion in 1984. 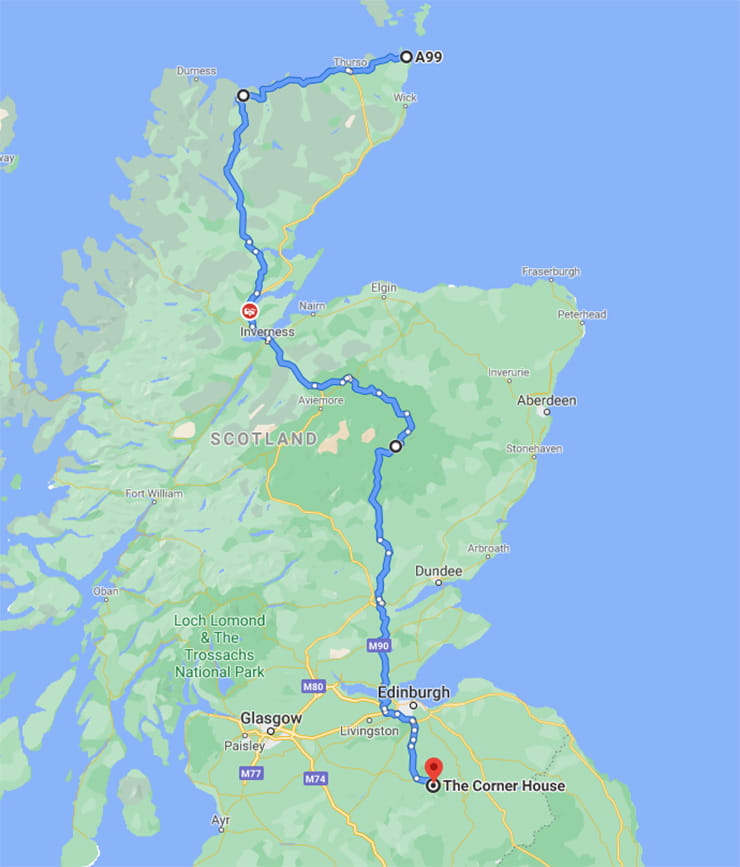 Click map to open in this route Google Maps

The scenic route starts off by heading west on the NC500 along the north Scottish coast, on the A836, past Dounreay nuclear power station (assuming you’re riding from top to bottom, which always seems the right way to do it; if you live south of Watford Gap you might see it differently). The quick route heads directly south on the A99 and A9 into Inverness; also part of the NC500, and although it has its moments, they’re its least interesting sections. The ride west as far as Tongue is much more fun, flashing past white sandy beaches and flinging between gorse-lined rock ledges and across wide, barren moorland. 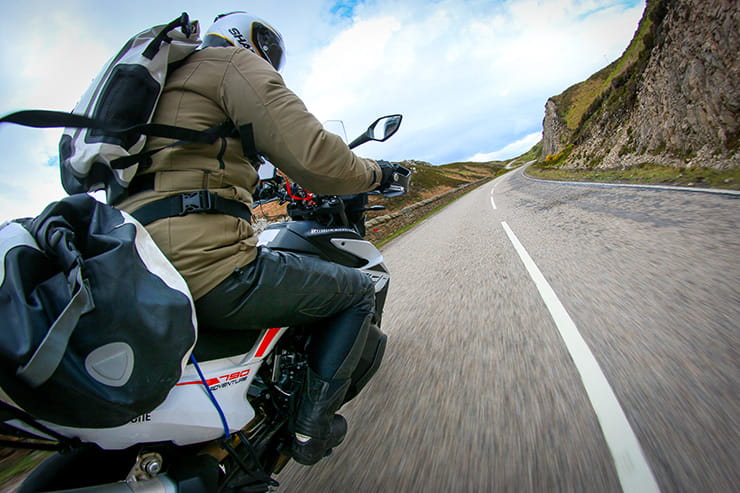 Then take a left just before Tongue, signposted Altnaharra, staying on the A836. It must be the narrowest, most squirrely A-road in the UK as it drops across the desolate wilderness of the Highlands. The next town, Lairg, is 37 miles away, which doesn’t sound much but there’s not a lot in between except lochs, mountains, conifer plantations and miles and miles of moorland. Personally, I love it; the inky black waters of Loch Loyal, ghostly depths harbouring who knows how many dark secrets under the shadow of Ben Loyal, or the looming Ben Klibreck, a curtain of cloud rolling off the ridge like dry ice – and the tiny hamlet of Altnaharra, location of Britain’s lowest-ever recorded temperature (-27.2°C on 30th December 1995).

At Bonar Bridge, the A836 turns right along the southern shore of Dornoch Firth, with the B9176 Struie Road shortcutting to the A9 and offering better scenery and riding.

Now it’s A9 trunk road for a while, crossing between Beauly and Moray Firths on the Kessock Bridge and past Inverness, south towards the Cairngorms. You could continue on the A9 all the way to Perth, but since average speed cameras were introduced turning the road into a paranoid trudge, a much better route is to turn off just before Carrbridge on the A398 and A95, then right at Grantown-on-Spey onto the A939 Old Military Road. 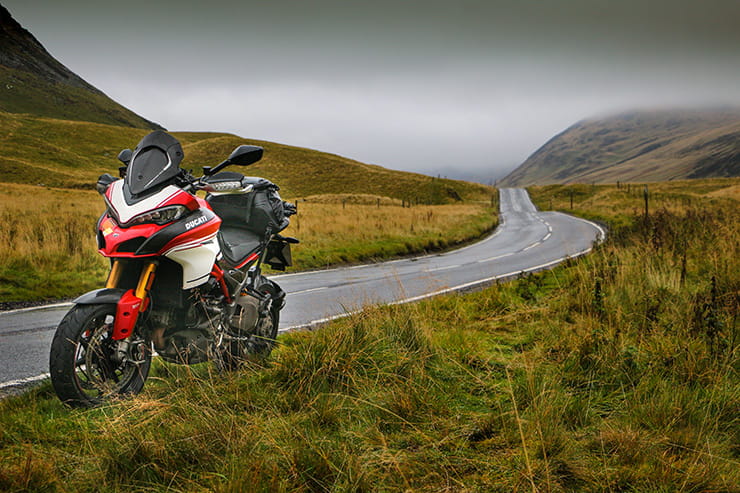 The ride around the eastern edge of the Cairngorms is one of the best in the country, moving from fiddly hairpins to long sweeping arcs, forested glens to broad views across heathery, snow-flecked hills. At one point, at the Spittal of Glenshee, you’re on the highest A-road in the UK.
The A9 is 88 miles between Carrbridge and Perth, and takes an hour and a half. The Cairngorm diversion is 105 miles and takes nearly twice as long. You will not regret it.

After Blairgowrie and Perth, pick up the M90 – yes, a motorway – to Edinburgh, cross the Forth Bridge and take the A720 ring road, coming off at Hillend and picking up the A702, A701, B7026 and onto the A703 to Peebles. By now you’ll be ready for a stop, so try the comfy Corner House in Innerleithen 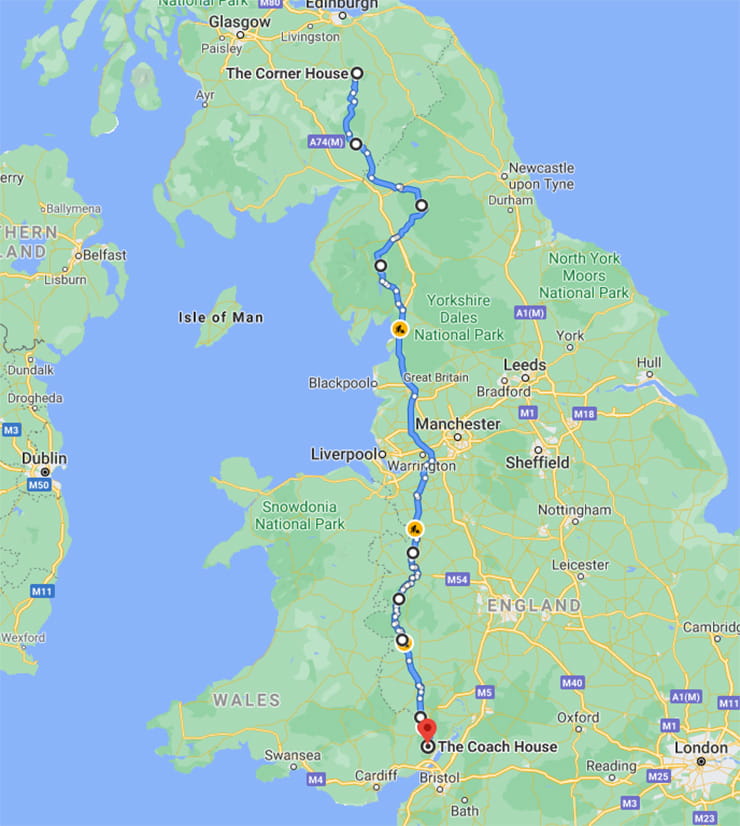 Click map to open in this route Google Maps

Set off on the B709 south from Innerleithen – you’re joining the second-longest B-road in the UK as it winds down between low hills, conifers and farmland towards Langholm, past the Buddhist temples at the Kagyu Samye Ling Monastery. From Langholm, a short stint on the A7 brings you over the Scottish border to Longtown, from where you strike off towards for a brief fling with the Pennines. 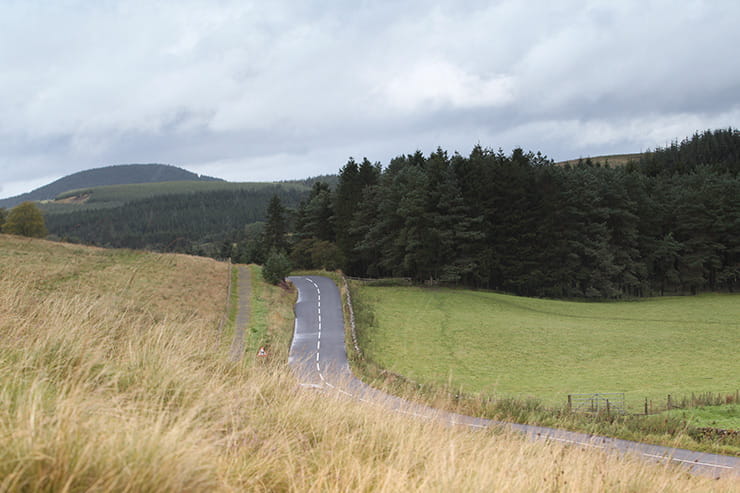 Coming in from the north on the A689, the tarmac sweeps through more farmland and low hills, riding up to Alston – a good place to stop for a coffee and a cake. Because the next section is a crazy run down the A686, one of the most famous motorcycling roads in England – past the site of the old Hartside Café (burned down a few years ago; yet to be rebuilt) with a grand view across the Eden Valley, and then dropping down a fabulous helter-skelter of corners and switchbacks – take it easy, it’s claimed a few victims over the years. After skirting Penrith, cross the dreaded M6 and head into the Lake District, taking the A592 down alongside Ullswater, and up and over the dramatic Kirkstone Pass, dodging motorhomes and caravans towards Windemere.

From Kendal, there’s no escaping the need to pick up the M6 for 70 miles to get past Lancaster, Preston, skirting between Manchester and Liverpool. Peel off at the junction with the M56, then at the first junction take the A49 past Tarporley (say hello to Oulton Park) across open flat farmland down to Whitchurch.

After Whitchurch, follow the B5476 to Wem, then dodge around Shrewsbury on the A49, but peel off right at the golf club heading for Exfords Green and Longden on an unclassified road – we’re heading for Hereford across the Shropshire Hills, and the A49 is the quickest way there; but for a diversion on smaller, more interesting roads, the A4110 that runs parallel to the A49 is better, depending how you like your road.

South of Hereford, take the A466 towards Monmouth, cutting through classis English countryside with high hedges and rolling fields, and by now you’ll be ready for a rest so pick up the A466 and trace the River Wye to Tintern where The Coach House B&B, just up the road from Tintern Abbey, makes an agreeable stopover. You’re now in Wales. 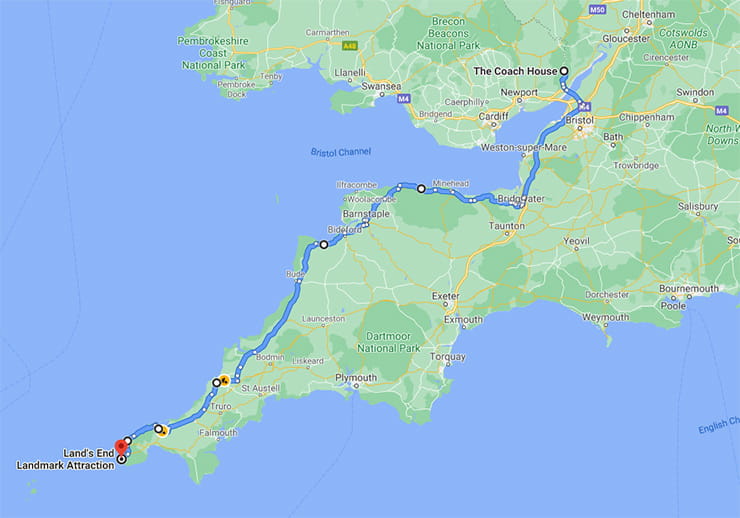 Click map to open this route in Google Maps

The last day starts by finishing off the Wye valley, then head around Chepstow onto the M48 across the Severn, hooking up with the M5 until jumping off at Bridgwater (always wondered where the ‘e’ went) and heading west on the A39.

The first part of the A39, to Minehead, used to be a cracking road, but over the last 20 years it’s become populated with caravans and double white lines, making overtaking a bit hit and miss. But it gets better from Minehead onwards, and by the time you’re at Porlock it’s ready to impress. Porlock Hill is a crazy 1 in 4 with a couple of super-tight, super-steep hairpins – steep enough to make you go “Oh, hang on…”. But then you burst out onto the roof of Exmoor, skating between heather, ponies and sheep as you wind across towards Lynmouth, the Bristol Channel dropping away to the right. 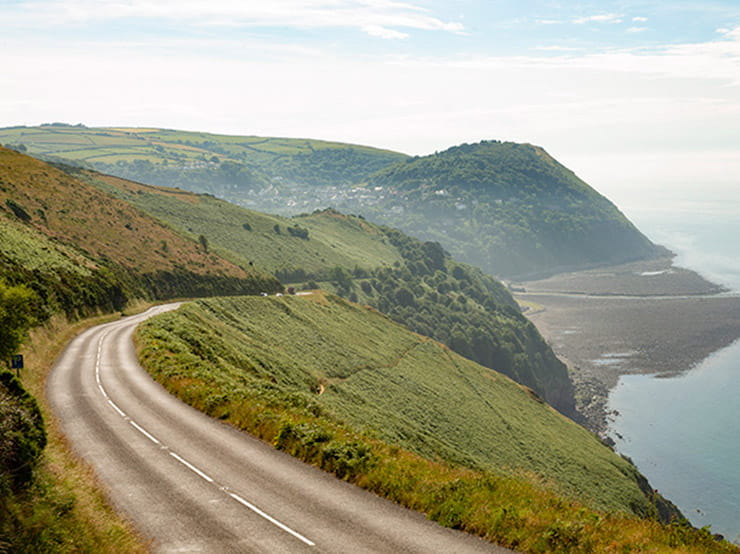 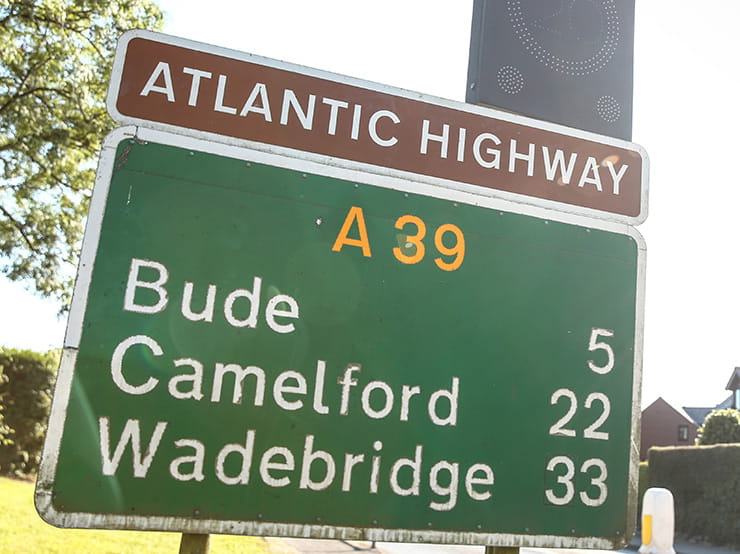 After the sharp descent into Lynmouth – England’s ‘Little Switzerland’, named after the way the houses cling to the dense, woody hillsides – the road climbs up again, funnelling between high hedges towards Barnstaple.

The A39 is also called the Atlantic Highway; a grandiose soubriquet that slightly overstates the nature of the road, as it winds gently along the north Cornwall coastline, the ocean ever-present just out of sight to the right. It’s worth striking off to the coast as you pass; Bude, Boscastle, Tintagel, Padstow and Newquay are all worth a look. After taking the A392 briefly just to avoid the A30 as long as possible, eventually it carries you to Hayle where a last diversion to St Ives – always chocolate box pretty – and along the rocky coast through Pendeen past long-abandoned tin mines, to the final destination, and the end of the road at Land’s End.

Congratulations, it’s been three long days, but you’ve done it!