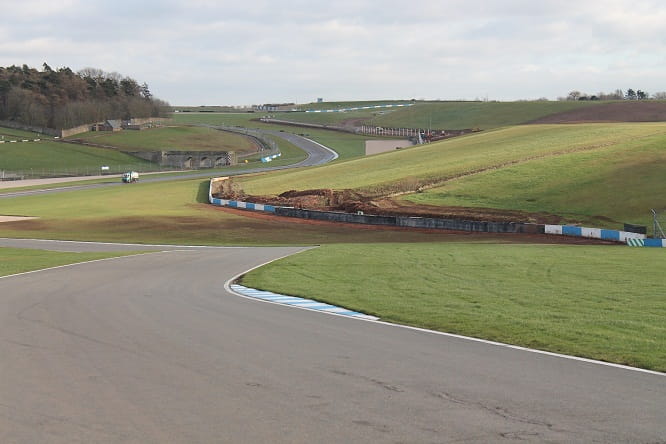 Donington Park has invested over £1 million in its facilities over the winter months in preparation for the 2015 British Grand Prix.

MotoGP hasn’t visited the Leicestershire circuit since 2009 and upon signing a deal with the Circuit of Wales to hold this year’s event, Donington agreed to undergo a considerable amount of works to meet the FIM’s Grand Prix homologation standards and improve the experience of both spectators and competitors at the venue.

A large part of the cash has been spent on improved drainage in the paddock areas, which previously built up large amounts of standing water in the rain.

There have been no alterations to the circuit layout itself but run off areas have been extended at Craner Curves and the Fogarty esses. FIA-standard debris fencing has been installed on the outside of Hollywood corner and on the inside of Schwantz curve, where a new spectator banking will open in the summer. A new, flat-top spectator banking will also be opened on the inside of McLeans, offering fans the first ever unique views of the eastern part of the circuit.

“We have made a significant investment to further improve our facilities at the circuit over the winter,” said Donington’s Managing Director, Christopher Tate. “I know all visitors to the circuit, be they teams, drivers, riders, spectators or officials, will all appreciate them throughout the very exciting season we have ahead of us, starting on Easter Weekend with British Superbikes.”

The circuit is promising further investment ahead of their first major race meeting of 2015, the opening round of the British Superbike Championship between 4-6 April.