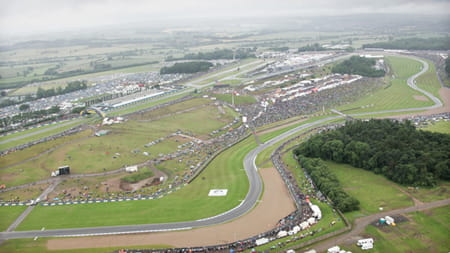 The world’s premier motorcycle racing championship will return to Donington Park in 2015 for the first time since 2009 after an agreement was reached between Dorna Sports and the Circuit of Wales earlier today.

We brought you the news that the Circuit of Wales was to host the British round of the MotoGP last year, however, at the official press conference in Wales earlier this month, circuit bosses seemed unconcerned that the circuit would not be ready in time for the first event in 2015, with Michael Carrick (Chief Executive of the group behind the circuit) explaining that it wouldn’t be ready until 2016.

However, as Chris Herring of the Circuit of Wales earlier explained, their priority over the past few weeks has been to secure an alternative venue for 2015: “After announcing the long-term MotoGP agreement between Dorna and the Circuit of Wales three weeks ago our priority has been to agree the venue for 2015. It is in the interests of everyone, especially the fans, to make a decision as soon as possible and in Donington Park we have a venue that shares our vision for growing MotoGP in the UK.”

Donington Park motor racing circuit, which is located on the Leicestershire/ Derbyshire border, was originally opened in 1931 and hosted the British MotoGP from 1987 to 2009 until it went back to Silverstone on a five-year deal from 2010. The new partnership with Donington will now focus on the promotion of the 2015 MotoGP event and any upgrades the circuit requires to comply with FIM MotoGP World Championship circuit standards.

Dorna CEO Carmelo Ezpeleta added: “The Circuit of Wales has worked very quickly to secure the best deal for the British race fans and we believe Donington Park will deliver a fantastic race in 2015. Donington Park has a long history and has been the scene of some of the most exciting MotoGP races in recent years and we are sure that the extensive works undertaken since it reopened four years ago will guarantee a successful event.”

Christopher Tate, Managing Director of Donington Park said: “Donington Park has a rich history and was the long-term home of the British round of Moto GP up until 2009; so today’s announcement has been welcomed with great joy by everyone associated with the circuit.

“In the past three weeks, our team here has worked tirelessly to bring together the commercial arrangements for MotoGP 2015 in a way which supports our continued growth, while also providing the new UK rights holders with a successful event. It is a great honour that those rights-holders, the company behind the yet-to-be-built Circuit of Wales, as well as the MotoGP organisers Dorna Sports SL, have decided that Donington Park is the right venue for the 2015 UK round.

"There is of course much work ahead of us here, but we are more than excited - we are ready for the task of running MotoGP back at Donington Park. We have the best motorcycle race track in the UK and are firmly at the heart of British motorsport. We start work on 2015 today."

The date for the 2015 British MotoGP is expected to be announced later this month.