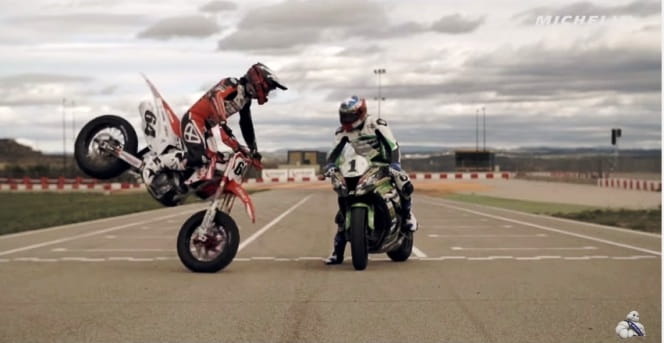 Michelin has released a rather high-budget looking video to support their newest web-based campaign; WE ARE ALL RACERS. The first episode features 2014 FIM CEV Superbike Champion, Kenny Noyes, on a Kawasaki ZX-10R and SuperMoto GP rider, Sylvain Bidart on his competition prepped Honda CRF.

As the strapline states, 'two different worlds go head-to-head but fuelled by the same passion'. Until recently we never thought we'd see the likes of Marc Marquez or Guy Martin riding dirt track but the annual Superprestigio event in Spain at the end of each season pits racers from all genre against each other. Equally, we've also seen Scott Redding riding motocross and supermoto as key elements to his training, so each racer doesn't necessarily stick to what they are known for but when two stars from road racing and supermoto collide, thankfully Michelin's production team were on site to record it.

Intriguingly this is listed as episode 1, so lean in a little to your screen, watch this, gawp and stay tuned for episode 2: