Still, at the physical point where the edge of the Republic of Honduras butts up to its counterpart in Nicaragua, I had the immigration hall to myself and blessed be the day it was an easy frontier to pass through. Central America has many attributes including the boringness of borders that come thick and fast when any one of these countries can be crossed in a day. Once into Nicaragua I found a hotel and then walked across the square opposite the hostel, a couple of blocks further past a fast food restaurant called Tip Top I was standing near the Cathedral Basilica of the Assumption of León and the artwork of noble activists. 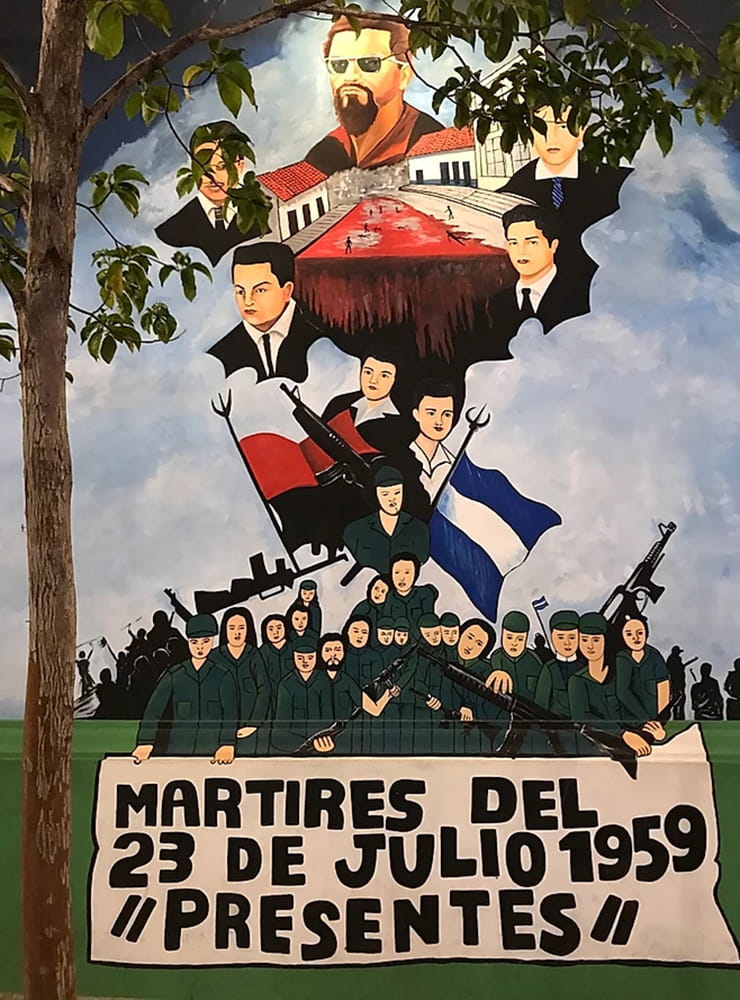 Of typical colonial baroque style and built between 1747 and 1814, the cathedral consisted of an anti-seismic construction, its walls having survived eruptions of the Cerro Negro volcano, earthquakes and civil wars. Being the first Episcopal seat of Nicaragua since 1531, what interested me were the cathedral's crypts where amongst several illustrious figures buried there at the foot of the statue of St Paul, was the leading figure of the Modernism Poetic Movement, Rubén Darío. Known in these parts as the ‘Prince of Spanish American Poetry,’ he was to me how I imagine a Latino would think; the intellectual fabric, the visceral DNA of a man who spoke for the culture of a continent; to copy a quote: “There are hundreds of miracles within a single machine. Americans calmly explain these with mathematical formulas. Our difficulty is to learn, theirs to appreciate. We Latins, even the most intelligent of us, still count on our fingers and toes. But once we do learn, we shall surpass the Americano, because we understand the spiritual significance of a machine. We see the beauty of combining gas, grease and steel into a powerful, exact movement. We appreciate the material destiny of the universe.”

Dario was the writer who used the phrase along with many others to describe how everything we see is a dream within a dream, and without the discipline of philosophical tautology this is something we have no way of disproving. In my own dreamworld I started to cross the dreamworld of this place called Nicaragua.

The difficulties of ambitiousness are hugely emphasised by journeys as immense as this. If you were to reduce how you might feel about riding your motorcycle, for me there is nothing harder as I struggle to make myself feel alive. As a deceit of the mind, medical illness is a killer but riding a motorcycle could if you thought about it be the same. Is this what makes us ride, the fact that we are sometimes so close to death? Dario talks about a ‘bud of thought that wants to be a rose’ and on I chuff up the backsides of truck after car after cart to skim alongside then to skip in front only to do it again a thousand times. 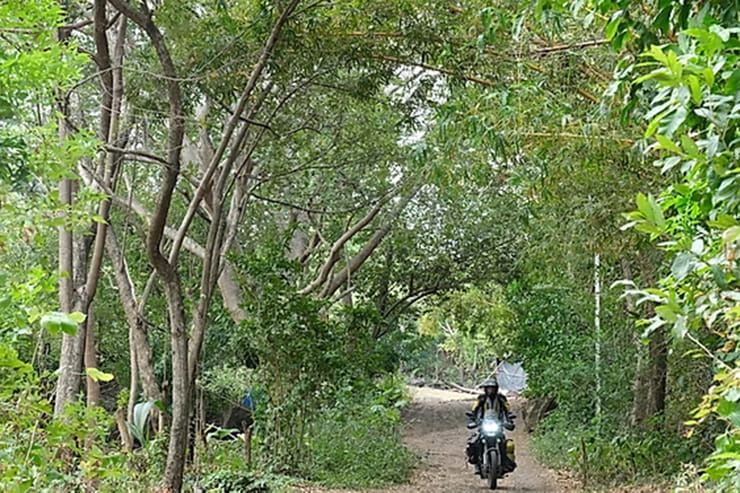 On a journey like this you can become preoccupied with death, not in a macabre way but via the simple pragmatics of riding so much so often all day. The beauty of the bike, the way it swoops into position and weaves with a flick of the bars. The feathering of the clutch and a touch of the gears the tiniest tread on the brake. Then surrounded by that brief bubble of empty space you can for a moment call your own, do you look around. 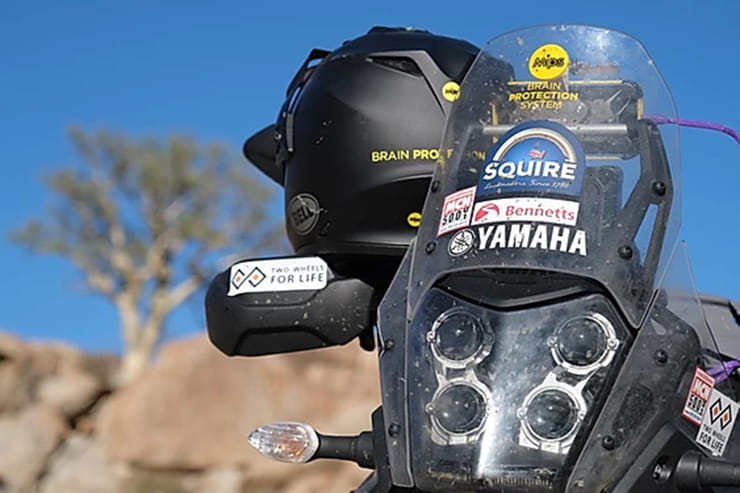 I read how human thinking depends on metaphor. We understand new or complex things in relation to things we already know. It’s hard to think about life in its big picture frame, but once you apply the metaphor “life is a journey,” you see the track winding down from the Andes or some other worthy cordillera and you’re guided to manageable conclusions; you should do the coursework, pick the right direction, find travelling companions, go alone, enjoy the trip, because there may be nothing at the end of the road. Similarly, it’s also hard to think about the mind, probably the most complex organic matter in the known universe but once you pick a metaphor for whatever the mind is, like the road it will guide your thinking.

In my case as a storyteller I think of a story as a ‘letter that the author writes to himself, to tell himself things that he would be unable to discover otherwise.’ A story is an ordering and sense-making apparatus that helps our brains render the frantic incoherence of chaotic existence into comprehensible narratives. I am riding around the world and the size of it is too much to absorb in one bite. Stories have beginnings, middles and ends and need to be licked off the plate with the tongue touching the tastiest bits. And it’s not necessarily always in that order because our lives also skip and jump following some internal logic in every person’s discourse of mortality.

The next day I arrived in Granada, the sixth most populous city in Nicaragua and one of its most important and iconic places. With a thriving indigenous population and parked as it is on the shores of Lake Nicaragua, the world’s twentieth largest lake, the vegetation is a reflection of its climatology. Humid and dry forests lie along the base of the Mombacho volcano which exists with only one known eruption in 1570. Higher up the slopes a cloud forest grows characterised by low level cloud cover, and further up a dwarf forest existed in its own ecosystem, kept small due to poor soil.

Locals tell of secrets they tell when they climb the mountain. They say around here, in the way myth tells of tall trees holding up the sky, a secret can be kept as long as it’s not known by yourself. They say the biggest secrets can only be told to strangers. People tell me secrets they wouldn’t tell their friends and I’ve told my secrets to the wind and I know the wind tells the trees. On the dwarf slopes higher above the canopy of cloud on a lake in Nicaragua this is also what people say they do. 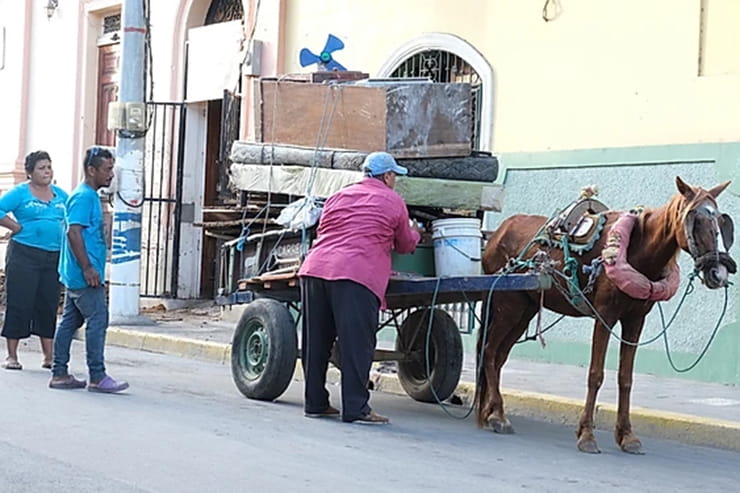 Granada was a beautiful city and I felt if I were to speak of it would realize how little of this incredible place I knew. Instead on a pew in Our Lady of the Assumption Cathedral beside the square I sat looking up sotto in su at the ceiling paintings above. Around me wondering in and out, it seemed all of us were gathering strength for wherever it was we needed to do next. For me, as long as what I’d seen and heard were set in words, I could let the memories fade as if they’d never happened. Not remembering allows you to move on. Sights I’d seen and things I’d started to feel from a thousand strangers were locked into each other for an instant and then gone. 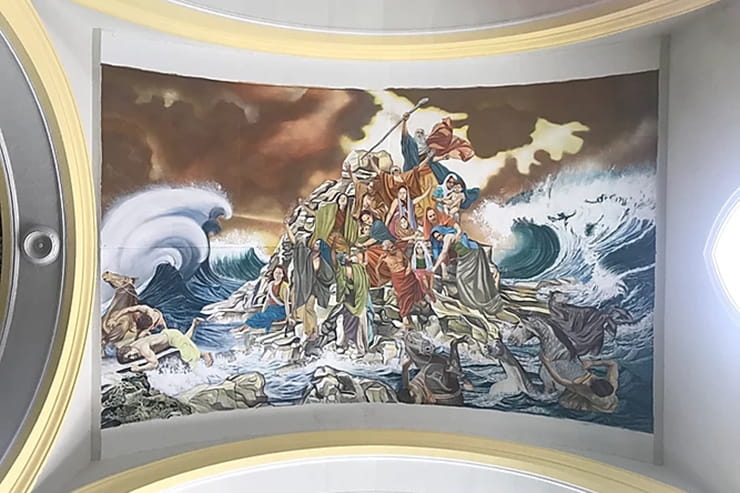 I left Granada for a short ride to San Juan, riding off-road for much of the way when I realized my satellite navigation was accidently on ‘walking’ mode meaning I was being led in a straight line in a way a horse would follow. Eventually after circling around the town I found lodgings for what I could afford. Next door at the shop selling fishing equipment and hand rolled cigars a dude called Gerry came up to me and started chatting about the bike. An American who’d moved here these past sixteen years remonstrated with me and said I had to go to Ometepe, to go straight away and get the boat. At the cigar shop a crew of guys from New York, some originating in Minnesota had sold up and shipped out here on a six-year plan. Jarrett was the cigar man, sharp as a freshly cut kipper and Andy, tall, bespectacled with his curly black hair had a warehouse in Brooklyn and this he said, “what was he really wanted to do?” Cigar man cut in and said Andy had a million-dollar bar in Manhattan and all curly haired man wanted to talk about was his collection of classic motorcycles. He reeled off the names such as a DT this and that and something he bodged from bits. I got lost and he was charmingly geeky and when I said I’d love to see them we arranged the next day to meet at ten. So they put my bike into their shop, locked up and I went to Simon Sez looking for a cold drink but it was shut. Back a bit up the street a crowd gathered around street furniture drinking so I found a table inside. It wasn’t a bar conventionally appointed, more an alcove, garage sized just large enough to park a car. The barman was Swiss and I couldn’t make out his gender but made a note to ask Andy why first-worlders who earn in a week what these folk here scrape together in a year migrate to one of the world’s poorest countries.

The next day we drove over to the northern beach, watched a game of baseball on the way and chatted to some girl from California whose sister worked for CNN. It’s a wired world but it’s mainly connected with people simply passing on messages most of which didn’t really have to be sent. And there I was, somewhere, like a gyroscope and should my wheels stop spinning I would crash into another orbit with no guarantee I’d return but ever so slightly getting lost in an unlikely paradise.

The ferry to Ometepe was the cutest riveted old tub crammed with the baker's truck and melons piled high on pick-ups. Piles of coconuts were strapped down in baskets and as I paid my seven dollars, we set sail and I fell asleep on the deck by my bike, sea spray splashing over the low side. Two hours later we docked in the small and gracious High Street of Altagracia. I stopped at the Cornerhouse Coffee café and ordered delicious eggs benedict with tomatoes, potatoes and pesto washed down with pineapple juice all followed by the freshest locally grown coffee from the nearby plantations.