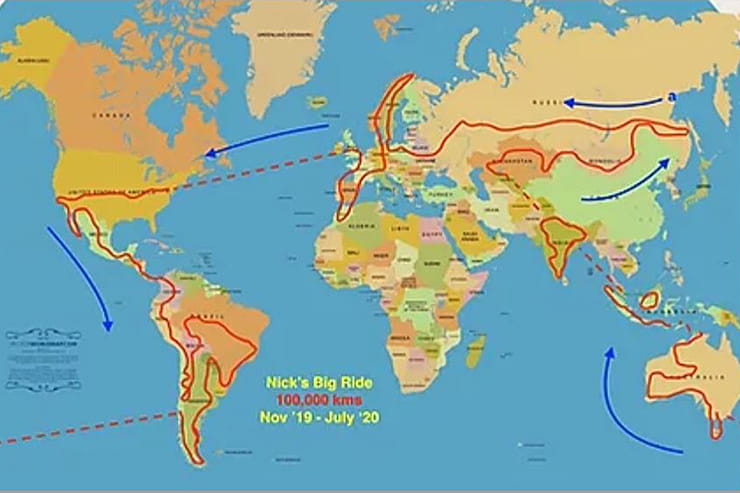 So, I got a cheap flight, Gatwick to New York, Norwegian £209 one way, food extra so I got a meal deal at Smiths, a snack plus something to drink for under a fiver – and I wasn’t coming back, not for a while. I’m a bit of a ghost in my family, been away a lot. Watched the new film about JRR Tolkien, the world's greatest fantasy writer and here I was doing mine. The journey had started.

We landed, I found a hidden spot behind a pillar in terminal one and kipped on a bit of carpet, might have been a prayer mat. No breakfast, straight onto the Air Train to terminal 8, bus to the cargo area, paperwork sorted by Moto Freight – nice one Tim & Kathy – why are custom officials so bored looking – unpacked the bike like a present to myself and out on the road.

Three degrees and cooling, bright sunshine, busy on the roads down the Beltdrive Parkway until New York appeared, monuments of muscle and concrete that touched the sky. The Empire State stood on 20th West and 34th Street, 2 million square feet of gorgeousness all dressed in modernist materials, steel and plate glass. Every single window, and there are thousands, all etched in the art deco period of the 1920’s. So, in and out of New York, through the Lincoln Tunnel, one and a half miles of slow traffic under the Hudson River connecting Weehawken, New Jersey on the west bank with Midtown Manhattan in New York City on the east bank. It was dark by the time I got out.

My credit card was playing up - polite term for being empty - so I'd just enough cash to get a cheap room. The woman said how long did I want it, she pointed to a price list by the hour and feigned surprise when I said I wanted it all night. Found another, cheaper, ordered some food, wrote my blog. Went to sleep. Adventure can be that simple.

It was cold. 3 degrees centigrade. When I opened my visor, my eyelids frosted over. The blood drained from my hands, so my white fingers had to work hard to pull on the levers. I'd a meeting with my sponsors near Atlanta which was important in terms of promoting the bike in the US this year and next. I know it's hard to understand how a journey like this is a job, but to me it's not some holiday - that will come in time, there will be days - but getting up in the morning is about being paid to ride my bike, which is a kind of joy.

I stopped briefly in Baltimore; my TomTom took me bang through the centre. The tough looking ghettos didn't compare with poor areas I'd seen in Africa but in such a rich country and in these poor parts I only saw black people. Lined in neat rows, terraced housing on the outskirts of the city looked scruffy but habitable. It was friendly enough and I talked to dudes through the open windows of their pick-ups and the amazing thing is how everyone appreciates the ethos of being on a motorcycle. There's a link to their wild west days sitting on a horse, somehow heading out to the unknown with a backpack and only a vague plan of why. In a world of sheltered scheduling this unappointed intent is liked, no, treasured almost as if people need a bit of it to rub off on their own enforced pattern of daily life.

My God the weather around the ring road of Atlanta was horrendous. Cold biting storm rain in Friday afternoon rush hour traffic. I'd ridden 480 miles to get here, needed to make my meeting, spray everywhere, just awful. Yet the calm of riding into the suburbs of Marietta to meet up with my team was good. Everyone from the HQ of Yamaha USA came out to greet me, it was fantastic. I gave interviews for their social media and then retired to my lodgings nearby, a Caribbean takeaway which I ate hungrily, washed it down with a glug of milk and slept, I was tired. That was Day 1

And then past Washington DC, one of the most impressive cities I have ever seen and onto Yamaha USA anther HQ in Marietta Georgia. Good guys.

The next day I met these guys in Alabama.

If you tap into TomTom "Shortest Route" instead of "Fastest" you hit the backroads. It's a lefty-righty kind of ride and I hit the road across Alabama in the deep south. Tennessee to the north, Georgia to the east, Florida and the Gulf of Mexico to the south, and Mississippi to the west Alabama is known as the 'Cotton State'. It's a friendly place and in nearby Monroeville Harper Lee wrote 'To Kill a Mockingbird'. Here, they say people generally see what they look for, and hear what they listen for. Lee said “I wanted you to see what real courage is, instead of getting the idea that courage is a man with a gun in his hand. It’s when you know you’re licked before you begin but you begin anyway, and you see it through no matter what. You rarely win, but sometimes you do.” So, you set off on your bike.

Bemoaning, I was expressing discontent. There were the plains, no mountains, just trees, wide spaces where the cotton had all been picked and wrapped up in bales. Everywhere their lay graveyards, of people, headstones topped with flowers, or a littering of bits of cars.

Top bit spring thingy, everyone’s got one of them round these parts, they need 'em because the whole of West Georgia is a scrappers yard for dead sedans, punctuated by smart Baptist churches.  In a clearing I saw two guys shooting at a target so rode off the road and fell off in a deep rut. I got the bike up and went over to say hello. They were tuning up their gun sights in readiness for the hunting season.

They were rednecks, they said so and they said they like killing things. In the context of keeping the deer population down it made sense. A guy in Georgia said to me about New York that "I guess this is just how a like it, it could be said that’s because you don’t know nothing better, you dumb cluck." He said it thinking I wasn't from these parts when some other guy, an old farmer in his pickup said just about the same thing, "are you from New York?” I was about to interject - is that a West Coast word - “cos a never seen no one from there and a don't want to either.” Whoa! Did he just say that? “Actually, I’m from London,” Narrowing it down to the Land of Our Fathers would be a stretch and even I can’t say Machynlleth, “an a guess that’s even worse,” he said,

“ah jeez,” and he drove off. Meanwhile back to our resident rednecks, they loaded up another musket and peppered the hell out of their target. “Arm deaf,” said Dave, “can’t hear a damn thing, all shot to mush,”

Jeez, someone had dialled 911 and the ambulance had turned up and then the fire guys. Whaat... I only laid down the bike!

What I like from Lee's main character Atticus is “you never really understand a person until you consider things from his point of view...until you climb into his skin and walk around in it. Before I can live with other folks, I've got to live with myself.” That's what I think about when I see folk as I pass by on my bike.