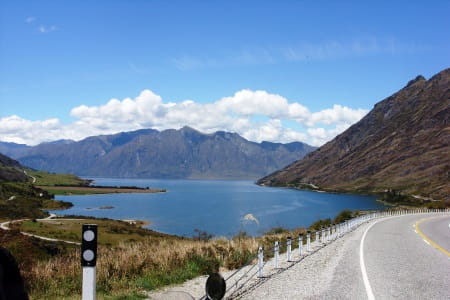 Tucked away down at the bottom of the world is New Zealand.  A country with a funny name where two small islands are cast adrift in the vastness of the Pacific Ocean, yet it is half again bigger than Britain.  Part of the British Empire and coloured red on the old maps, it is now a young independent country but much of the old world charm remains.  Even today after flying across land pretty much all the way from London, taking off east from Sydney it’s all water and more water.  You get the feeling if the pilot were to be distracted for a moment by a handsome steward she would miss New Zealand and keep going all the way to South America.

This very isolation is what makes New Zealand such a wonderful country to motorcycle in. There just aren’t many people there; no one clogging up your road, no slow caravans delaying you interminably, no queues of sweaty tourists  at every lookout point or tearoom.

Yes, it’s a bit old fashioned and behind the times but that’s the charm.  Ok, Auckland is a big, cosmopolitan city (though with a certain maritime feel) but once out of its clutches its back to a  warm feeling of deja vu.  Tearooms with scones and asparagus rolls (and extraordinarily good coffee), A and B roads with nary a car to be seen.

The scenery in this country is absolutely spectacular, largely unspoilt, New Zealand offers a variety of climate from the sub-tropical North to the sub Antarctic South;  imagine one minute the Yorkshire Dales, next the Amazon  rainforest, and then  the European Alps,  and you will have an image of how New Zealand is put together.

Like any new country the people are a real mixture with a strong Polynesian influence in the north mixed with the Scottish and English settlers of the south and everything in between. The small town feel of the country infuses the people with a sense of warmth and friendliness, you have people in no hurry who will always take the time to stop and chat.

The well-known pleasures of motorcycling are magnified in such a country.  Lots of curves, an ever changing scenery, light traffic and great roads.  All tastes are catered for.  It is possible to rent a motorcycle and travel independently, making your own arrangements as you go.  With simple route finding and everyone speaking English, this is not problematic.  The other end of the spectrum is a fully guided tour with all arrangements made, a local guide and luggage van; busy people love the ease of this, do nothing except ride the bike, turn up in time for dinner and meet some pretty interesting travelling companions.  However, time has shown it’s an intermediate option that has found favour with UK riders.  Labelled the ‘self guided tour’ it combines the benefits of having accommodation and activities pre- booked with the freedom of riding by yourself. Combine this with a detailed pre-tour briefing when you pick up your bike, a complimentary GPS and you're ready for anything the country can throw at you. Most makes and models of bike are available with the new Triumphs proving exceptionally  popular.

Too good to be true? No! Settle in for the long flight, get comfortable and dream about traffic free winding roads. You'll be there in a day.

This piece was provided by HC Travel.