Rider fined for leg stretching but was it against the law?

An Australian newspaper recently carried a story based on a motorcyclist posting a copy of his $146 citation or ticket on Facebook, a post which quickly went viral. Not the first such posting, but this was unusual in that the rider Jake Sloman had received it for taking his foot from the footrest and stretching his leg out while on the Logan Motorway in Queensland!

The question is, is this relevant to riding in the UK and what would happen if your local law enforcement catches you with only one foot on the foot rest? 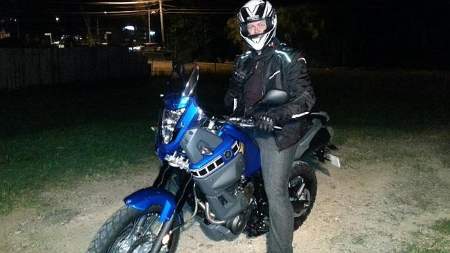 Needless to say the Australian police commissioner was bombarded by complaints, as well as many other riders expressing outrage at what appears to be somewhat petty treatment of a fellow rider.

According to the press report, Sloman saw the police car in front and was unaware he was doing anything wrong. He stated he could have understood if he had been riding with his hands off the bars or similar, but was taken aback at his treatment for just stretching his leg. When asked if he was going to contest it, he stated he could not afford to do so, so would just have to pay it.

The citation read that ‘as a motorcyclist he failed to keep his feet on the footrests’, although the visible section did not state any act and section he contravened. The picture of him in the article showed him sitting on a Yamaha Tenere trail bike, which we are presumably meant to believe he was riding at the time. 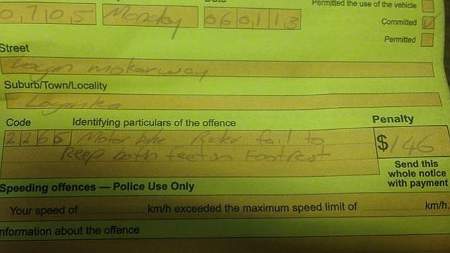 Initially it makes you mad reading about such injustice handed out to fellow riders, even if they are on the other side of the world. However, it should always be born in mind that the posted article only told one side of the incident and one can only presume that the officer had sufficient justification to write the ticket, as potentially it could have ended up in a court where he would have to justify his actions.

Now no doubt Sloman’s outrage is real, but if he looks at his own Australian Road Rules (Highway Code) section 271, it specifically states that he has to ‘sit astride his bike, face forwards and keep at least one hand on the bars’. And critically, ‘if the bike is moving, keep both feet on the footrests’, otherwise he commits an offence. So from this, it is reasonable to deduce that something else took place to make the officer enforce this section, like a “Why don’t you go and play police somewhere else” comment while he was getting some ‘advice’ on his general riding or maybe speed, as he admits to overtaking them.

What is interesting is that the Australians have a specific set of offences regarding the actual riding and seating position while riding a motorcycle, while in the UK, our only references/offences relate to the pillion. The law here states only one passenger seated astride the bike and using footrests provided, which would severely restrict owners of machines in some countries, who carry the whole family plus a few sacks of rice all at the same time!

So, in respect to a rider alone here in the UK an officer would have to resort to the offence of ‘not being in proper control’ which would be quite difficult to do unless the rider was doing something outrageous like standing on the seat or tank and ‘surfing’ as stunt riders quite often do at shows on private ground.  These days with linked braking systems, a hand or foot off the braking side of the machine would not really justify the charge.

However, behaviour such as ‘wheelies’ and ‘stoppies’ could easily be written up as ‘Without Due Care’ and depending on the surroundings, as ‘Dangerous Driving’ which can result in a term of imprisonment in some cases!

The story though opens several other avenues of thought though and the first one is ignorance of the law is no defence. A regular re-read of the Highway Code is useful to make sure you are bang up to date on any changes in legislation and road safety practice as well as signing ; most of us just throw it away after passing our tests, which time-wise could have been several editions ago!

Next is that when travelling to a foreign country time spent on the internet checking out the local version could also be time well spent. Recently while in Canada I too stretched by standing on the foot-pegs, only to be told by my local travelling companion I would get booked for ‘stunt riding’ and it is seen as being on a par with dangerous riding with stiff penalties to go with.

Also, my habit of stopping with both feet on the pegs and balancing at Stop signs is not seen as stopping in the eyes of the law and they need to see a foot touch the tarmac, otherwise a ticket is forthcoming. I am told several other countries also have a similar approach.

Likewise, while filtering is perfectly acceptable in the UK, in many places ‘lane splitting’ and filtering is not allowed. In the USA like the helmet laws, things can vary from state to state, so you really do need to know what the law says. How many people realise that in France and Spain for instance, that if you need spectacles to drive, you must have a spare pair with you, otherwise you could be fined?

In some countries while they do not always enforce the law like the reflective helmet stickers in France, you cannot always guarantee that you will not find an officer who wants to. One also really needs to know they are solid ground before arguing the toss, no matter how petty the officer may seem to be.

A viral posting may get you some short term fame like Sloman, but it will be at a price and maybe in some places that will include loss of licence!