Ducati Multistrada gets its UK kicks on Route A66 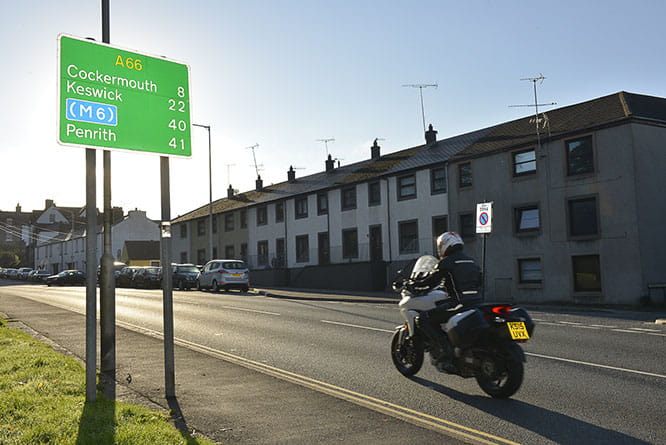 Ducati Multistrada gets its UK kicks on Route A66

When Bike Social's very own Marc Potter spent two weeks covering 2,500 miles of prime American Mother Road, I was left with the keys to the long-term test bike, the epically able and completely addictive 2015 Ducati Multistrada 1200 S -  to ride the A66 - one of Britain's favourite biking roads.

Route 66 is the iconic piece of road connecting Chicago in the state of Illinois to Santa Monica in California. A bucket list trip that is almost as synonymous with motorcycling as the brand associated most heavily with it, Harley-Davidson.

Meanwhile, the main part of Route A66 joins Workington in Cumbria on the cusp of the North-West coast of the UK to Scotch Corner, a slightly grandiose name represented by a service station on the A1 in North Yorkshire. They are split by a distance of 87 miles.

Okay, so they're hardly comparable like-for-like. If it were a game of Top Trumps: Greatest Ever Roads, the USA's version would be the Ferrari Enzo up against the UK's Mini Metro.

Both have their benefits though, from Goliath's fame, bucket list-association, diverse culture, tourist attractions and weather to David's locality, scenery, access to some of the finest roads I’ve ever ridden and lack of $7000 holes in your bank account. 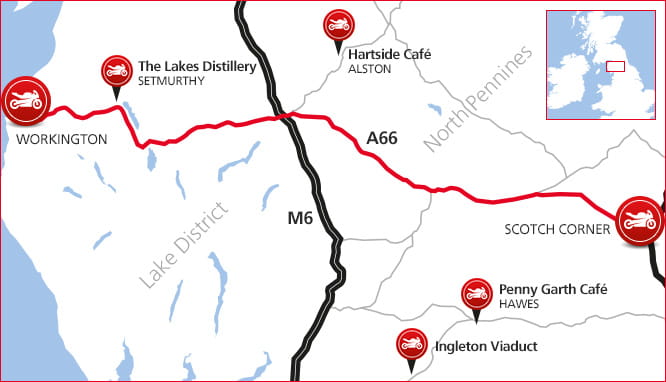 If ever there was ever a motorcycle-shaped weapon designed for exploring two of our countries most beautiful counties, then Ducati have done just the job with the Multi. A bike that we've had the pleasure of running on long-term test this year.

The latest version of Ducati's £15,995 (£16,945 as tested) Multistrada is a wonderful piece of technology. Not only is it a stunner to look at but I also got to test more of its versatility on this trip, altering riding modes, suspension settings and quantifying why ABS is necessary on a 160bhp sports-tourer.

Ducati’s claim that this is four bikes in one is perhaps debatable but If I were to cover another 574 miles of dull motorway combined with significantly un-dull B-roads in 36 hours then I'd challenge anyone to a rock, paper, scissors duel for the Ducati key. Well, the keyless igniton means it's not really a key, but you get what I mean.

The pair of xtra, lockable, hard panniers that come with our Touring kitted bike were loaded up with nonsense that I really didn't require. A photographer who rides a BMW R1200 GS and is knowledgeable of the area we were heading to was enlisted and we set-off from Bike Social's Peterborough-based HQ on our inconsequential, non-bucket list making trip.

Safe in the knowledge there was going to be no Chinese Elvis to meet, gun-toting rednecks to avoid or world's largest rocking chair to gawp at, this was about discovering how the Multistrada coped as a tourer and with the lumps and bumps of parts of a northern England. Areas I'd never visited but which are continuously and highly recommended for their bike-friendliness. Not just the landscape and road surfaces but the people and B&B’s – this was about breathing in what the UK has to offer. Much as the local tourist boards would disagree, I hope our motorcycling brothers and sisters from mainland Europe and beyond don’t come in their flocks to visit the A66 and its surrounding beauty because part of the enjoyment of this trip was the escape, the relative solitude. The air feels better, the roads emptier, the sky larger, the scenery unspoiled. It is perfect for maximizing the enjoyment of motorcycling.

So many tour in mainland Europe because it's easy to get to and while France, Spain, Italy and Switzerland may have some incredible views, perfectly tarmacked roads and culture, so does this country. And history. And road signs we can all understand. And it’s not a legal obligation to carry two breathalysers and a hi-vis jacket.

If we were to stick to the A66 alone this would have been a fairly lifeless trip where only the Ducati’s cruise control would have been tested. The trunk road that runs horizontally across the country is split between single and dual-carriageway which in fairness to the road builders, is wide, smooth and provides some big views of rolling hills and quaint farm buildings. As you might expect. The best stretch is between Workington to Penrith, a 41-mile dash where you feel like a small spec on an enormous landscape. The road is simple enough to navigate but not nearly as interesting as the Lakes and Dales to the South and Pennines to the North.

Thankfully, we opted for the scenic route! 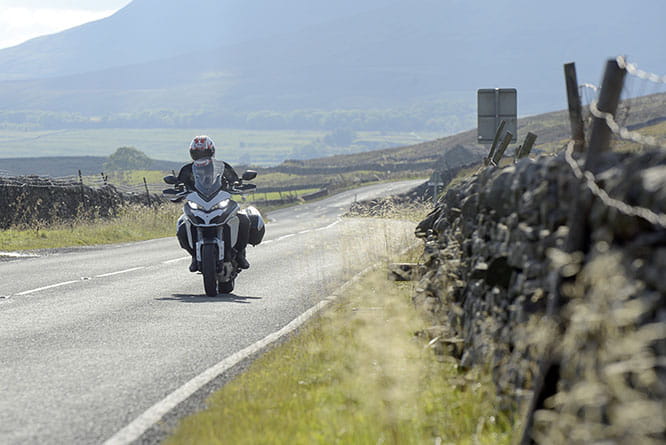 If this were a Top Gear TV road test we’d now cut to scenes of the Multistrada stretching its legs, accelerating away from camera, spraying stones around, hustling through the epic B-roads surrounded by scarily close dry-stone walls, grabbing some air over the humps when in Sport mode, all with suitably high-tempo music. And that’s just how it felt, the Ducati taking everything in its stride, making the journey feel so emphatic. Pirelli's Scorpion Trail II tyres glue the bike to the road while the semi-active skyhook suspension reacts every millisecond to the road surface grip levels, speed and throttle position. This is the latest evolution of motorcycling, sensors and electronics to smooth your passage, get you out of trouble and offer a refined ride.

This is a Rolex glistening in a Casio world. I want to swear to emphasise just how good this bike is. Effing amazing.

The V-Twin offers an audible commentary second to none. Like Murray Walker in his prime, the more you wind it on, the louder and more exciting the output gets. From a low grumble at town speeds to the gorgeous rip-roaring, ear-ringing notes of pure operatic drama that are directly linked to the hyper-responsive, fly-by-wire throttle like a conductor instructing bursts of power.

The new-for-2015 Desmodromic Variable Timing (DVT) engine is positioned slightly higher in the frame for greater ground clearance and offers both a smooth response at low revs yet remains punchy further up, with maximum torque of 100.3ft-lb @ 7500rpm. All of those 160 horses are used to full effect. 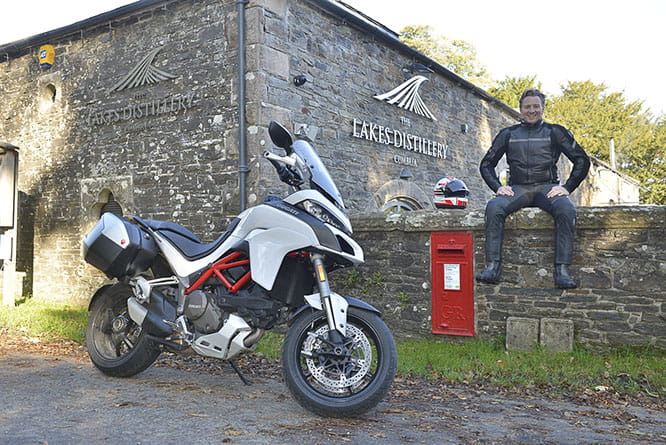 Just 12 miles from our A66 start line in Workington and The Lakes Distillery is well worth a visit where a Victorian farm has been turned into a manufacturing plant for Whiskey, Gin and Vodka. Looking like it belongs on the set of Emmerdale, there’s also a shop, bistro, bar and tours available. Slightly off the beaten track which means the approach roads are narrower with taller hedges and blind corners but it offers yet another excuse to peel off the main road and explore. 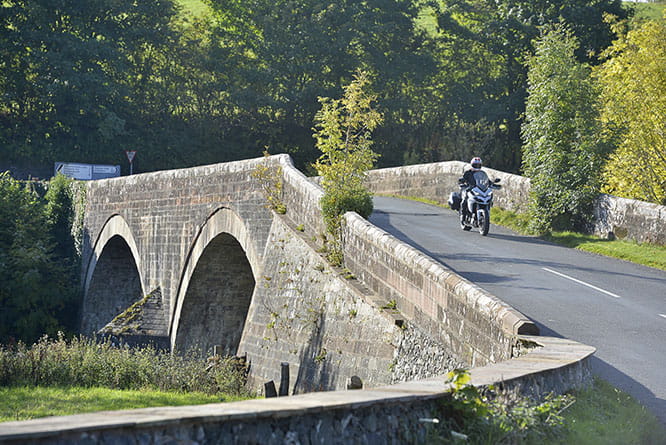 Once you’re over the M6 at Penrith head left and 14 miles up the A686 towards Alston in the Pennines is where the Hartside Cafe is based, 1900 feet up. It feels like you’re on top of the world and invariably, regardless of the time of day you visit, there’ll be other motorcyclists tucking there into a piece of homemade cake. It’s not the most salubrious of venues but there’s plenty of parking space, the views are spectacular and the approach road to the cafe is stunning so its easy to see why it’s so popular. Wide open views towards the peak are mixed with a selection of tighter, often blind, twisties and faster, rolling bends, all on some excellent surfaces. A bike with plenty of low-down grunt, light steering and an even weight distribution will offer terrific rewards as you haul up to Alston and back down to Barnard Castle. The cafe is 212 miles from Bike Social HQ but I’d find an excuse to ride there tomorrow if it meant playing on those remote roads again. 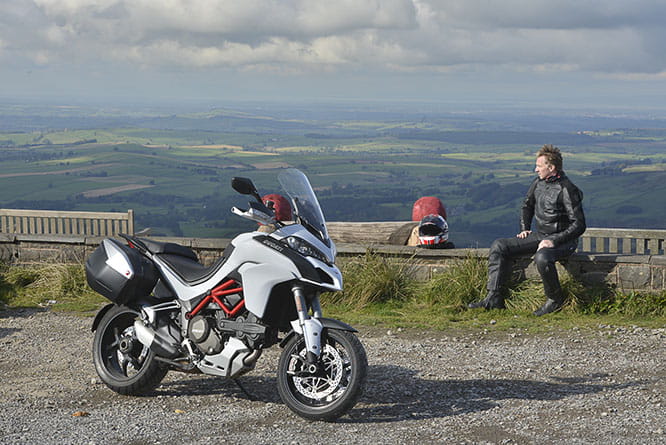 Even with its fully-loaded panniers adding the combined 326kg weight of bike and rider, the Multistrada ruled on these roads. The extra pannier weight encouraged the front to lift over the more severe humps but the front still felt planted in the corners. You’d think then weight plus 160bhp would create a stopping problem but then men from Italy thought of that. Brembo Monobloc four-piston calipers straight from the Panigale on 330mm discs are equipped with Cornering ABS via a very clever Bosch system all of which allow the rider to brake hard without the wheels locking…even in the corners. Some traditionalists might argue that its too clever, too much of the required rider input has been removed but I disagree. Ducati have demonstrated the next level of motorcycling – power mixed with technological advancements. Grace, poise and elegance meets sharp lines, practicality and raw performance.

Here is a £16k motorcycle that I’ve previously described as ‘wife material’ due to the initial investment required(!), its ability to look after you and why you only need that one bike for life. 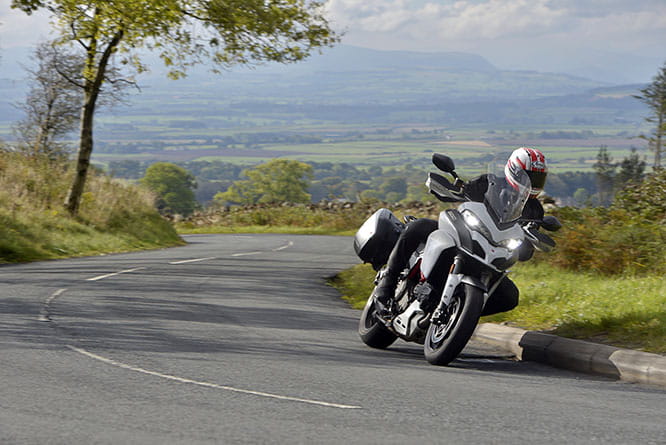 There’s room for improvement though (bike, not wife). After only 2500 miles the rubber cover on the gearshift has worn away which doesn’t suggest top build quality. Both A and B trips reset every time the ignition is switched off which is a little annoying and the 20-litre fuel tank soon needs replenishing, it rarely delivers +50 mpg, which didn’t stand up to my compatriot’s BMW.

The panniers on the other hand are easy to fit and remove with a one-key operation. The sturdy clasp, water-proofness and space are all beneficial for touring. They’re also pretty sleek without making the bike too wide. This was demonstrated when filtering on the A1 behind the R1200GS. I could zip through gaps the Beemer was only just squeezing through.

The three-stage heated grips are an absolute treat too and greatly appreciated on this trip. Even on the hottest setting they don’t burn like some others I’ve tried do. While on the A1 and the longer stretches of Route A66, I’d flick the Ducati into Touring mode which is a simple process even while on the move. The suspension softens and the power delivery, while remaining at 160bhp, is more relaxed making the journey more comfortable. Tap on the cruise control, the world relaxes and the miles quickly pass.

On the east side of the M6, or the Scotch Corner side if you prefer, but south of the A66 in the Yorkshire Dales and the roads are equally as glorious. Two must-visit locations are split by just 11 miles. The famous Penny Garth Cafe in Hawes is a friendly and popular place to be which serves good coffee and yummy cake although it has a limited capacity and its location isn’t totally convenient for parking. 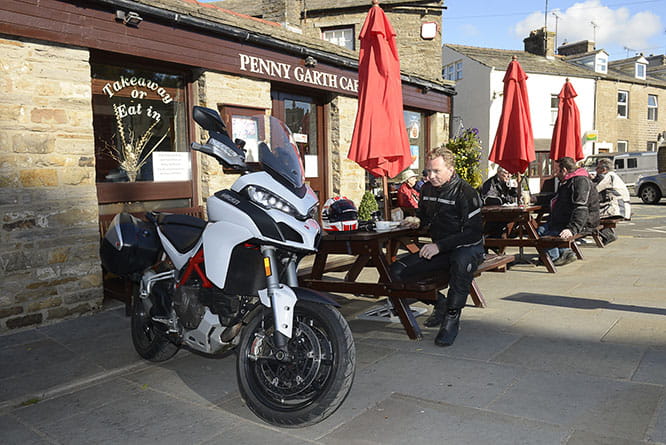 A further 10 miles down the road and you can’t miss the picturesque Ingleton Viaduct but be careful of the sheep who tend to wander into the road at their leisure. Time it right and the steam-powered train will turn the scene into a postcard from the 1930’s. There’s a tendency to keep the throttle cranked on the approach as the road undulates down towards a viewing point but if its not the sheep then be wary of trainspotters / tourists / opportunistic photographers pulling over with limited notice. 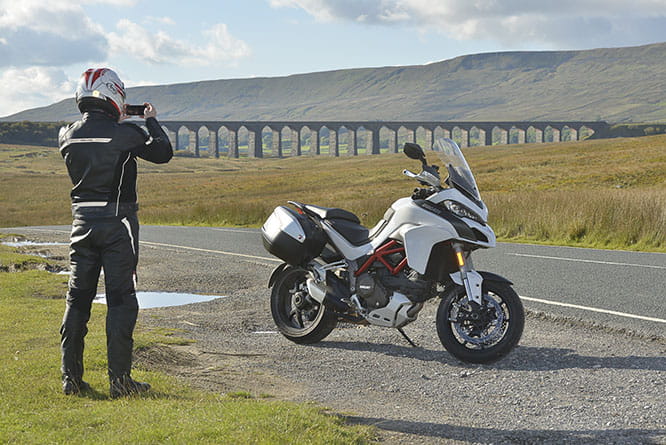 Route 66 may have its stereotypical roadside diners, gas stations and quirky attractions but Route A66 stands toe-to-toe for the quality of the roads. Across America you’d probably choose a Harley-Davidson over the Ducati Multistrada but around the Pennines and Dales, the remarkably clever Italian would dominate. In fact, I’d choose it for its versatility over any sports bike.

Route 66 may even have buffalo and wild donkey lining the roads but close in on Scotch Corner and Mainsgill Farm plays the UK’s final trump card with its collection of camels and lamas.

All part of the A66 experience which is not just a road linking each side of Northern England. 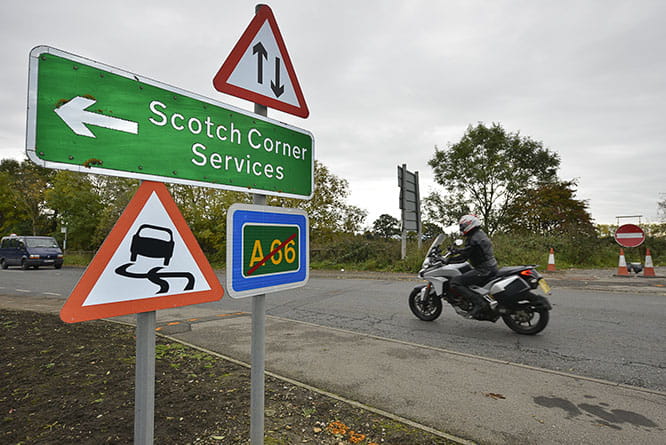 For more information on the Multistrada range, and to see the TriOptions finance offers Ducati are currently offering on the new Multistrada 1200, have a look at Ducati UK.