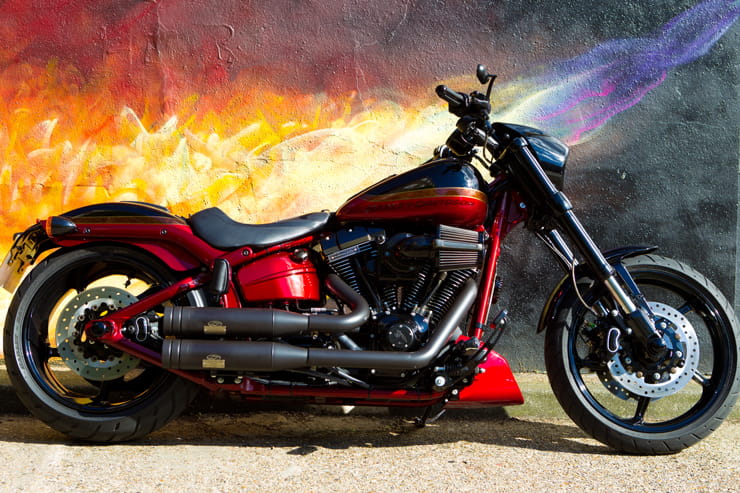 1 - You can’t buy memories, they have to be made

The dictionary defines adventure as ‘an unusual and exciting or daring experience’. But anyone attending Bike Week in Faak Am See 2017 would also add ‘where pretty much anything that can go wrong…does go wrong. Adventure means having a story to tell, so please, sit back and allow me to tell you mine.

I’m on my brand new £21,995 CVO Harley Breakout. Custom Vehicle Operations means that Harley have thrown everything they have at this bike, custom show-stopping candy paint, saturn finishes, controls, bespoke dash, Aggressor wheels with twin brake disks, inverted forks and a Screaming Eagle Twin Cam 110 motor. The CVO is all about dark style and massive torque. Bought two weeks ago and still running in. As far as I remember, there’s no mention of riding through a foot of snow for four hours in the running-in schedule, but hey-ho, what’s the worst that can happen? We are four miles from the hotel on day two and have been riding for eight hours already. A foot of snow just fell in the last 15 minutes. Welcome to the Alps in September.  A full day of rain has already turned roads into rivers, and is followed by hail, then the snow, meaning, today, I’ve covered more than 200 miles in second gear. So I guess that gear at least is well run in by now. I could turn around and take the 59-mile detour displayed on the sat nav – probably another six hours in miserable conditions – or turn on the GoPro and video my chrome plated 350kg Milwaukee snowmobile.  The video below tells the story of how it ended.

2 - Austria is a long way from Watford.

Euro Bike Week, a staple in the Harley owners calendar, is set against the beautiful backdrop of Lake Faak in the Austrian state of Corinth. What was supposed to be a 96-hour ride became 116 hours when the weather took a turn for the worse. 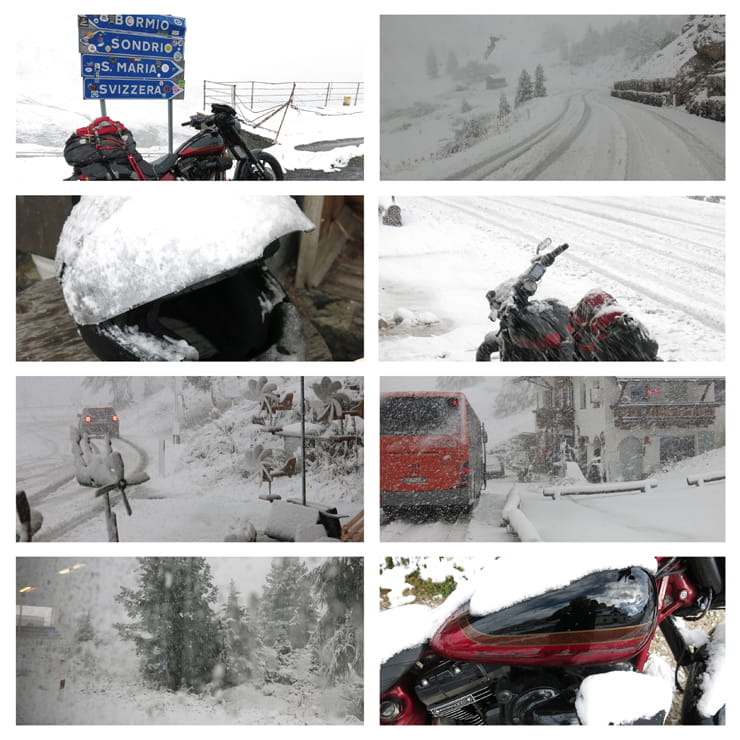 Of the 2800 miles ridden, around 2600 of them were in rain, hail or snow, with a few weird, dry miles as I passed through the eye of the storm. 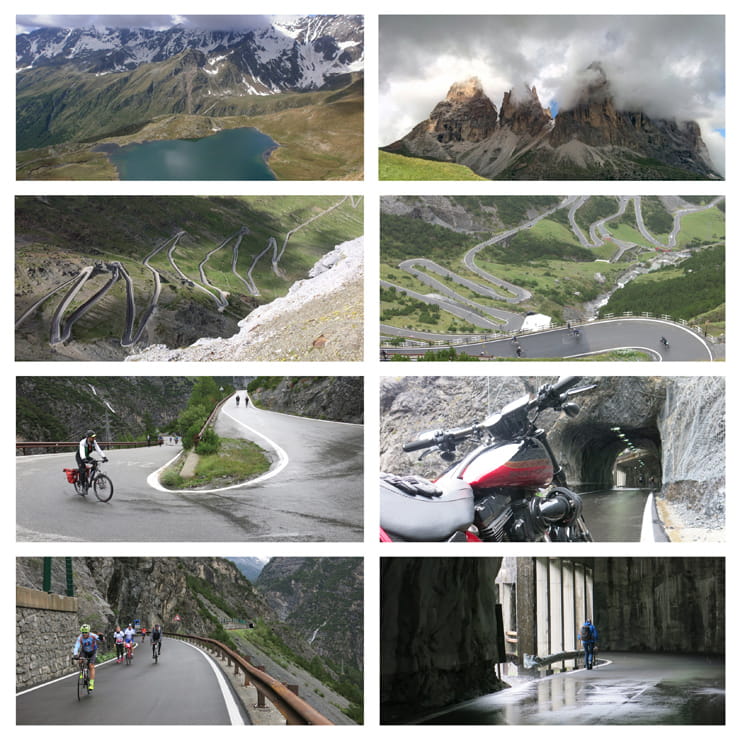 4 - I quickly found at least 14 different ways to put my feet on both the front and rear foot pegs in a bid to avoid leg cramp and numb-bum.

That became 15 ways after the tarmac grabbed my boot, twisting my foot and knee and nearly pulling me off the bike. No one buys a Breakout for the ground clearance, my fault for forgetting this. I found it best to put my heels on the pegs. 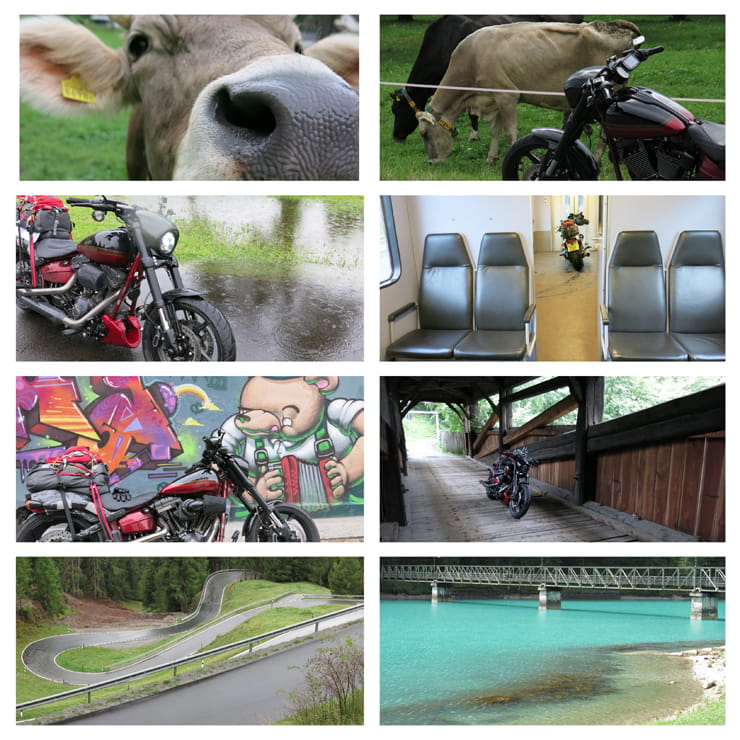 but on this occasion more of it would have been better. TomTom My Drive allows you to plan the route online and send it to your device. The quickest route was 14.47 hours and 914 miles from London to Villach, but I took the scenic route, avoiding motorways, and clocked up 1400 miles over four days. 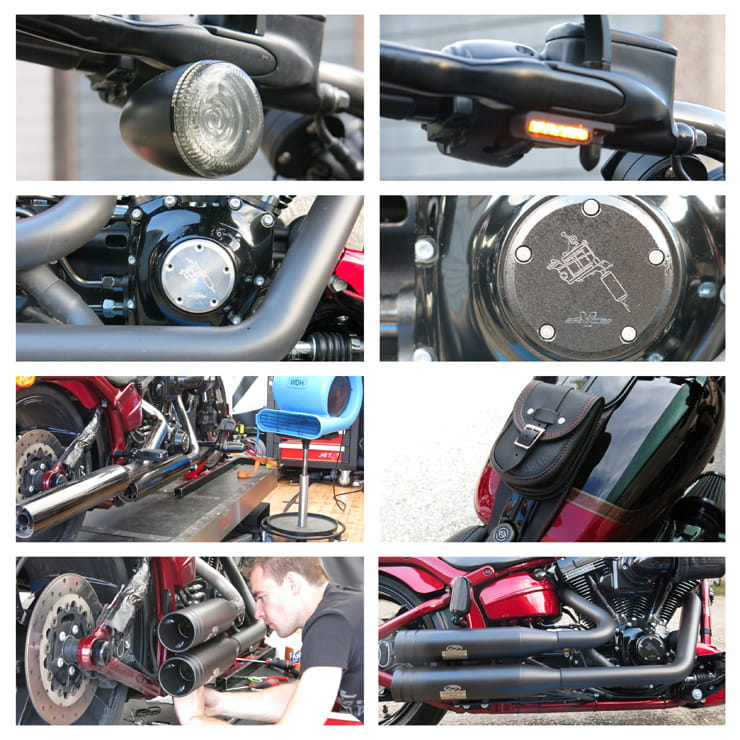 Modifications done in Faak am See

6 - The first few hundred miles of France are uninspiring, with just the wind turbines to occupy your eyes. 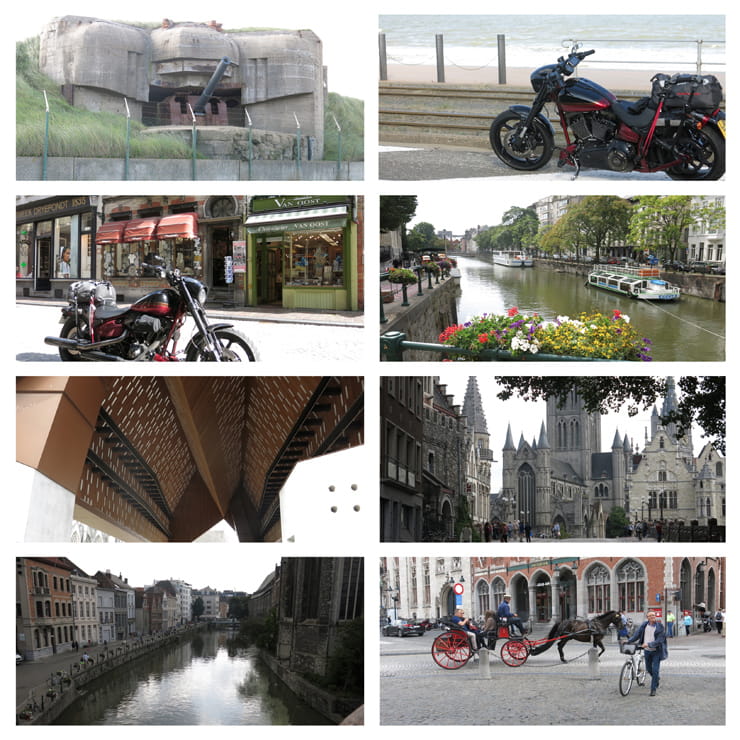 But there is more traffic near Brussels than rush hour on the M25. 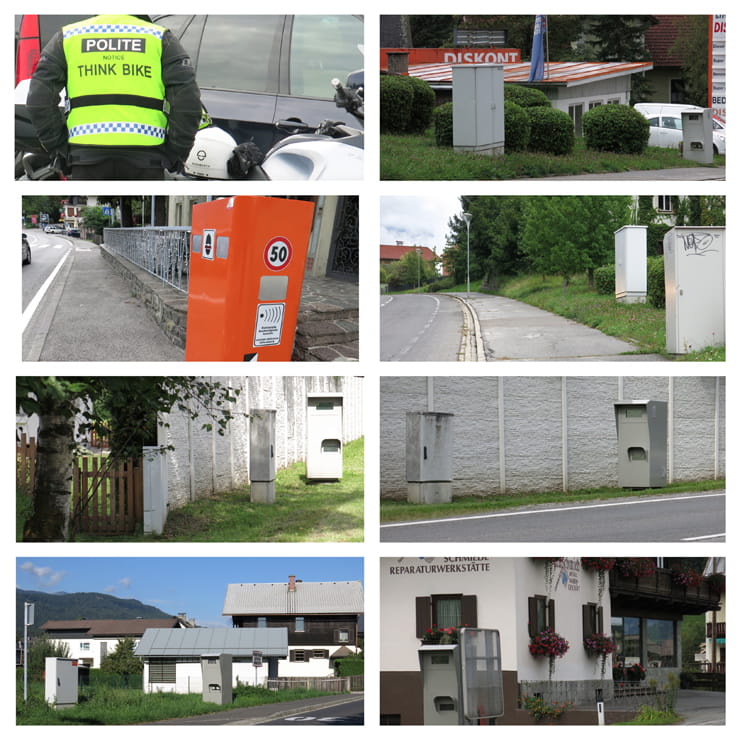 8 - French and German drivers are the most aware and polite.

Italians want to overtake even if it means certain death and the Swiss are disapproving of typical British riding; making you feel a like a teenage hooligan trapped in the middle of an IAM observed ride. 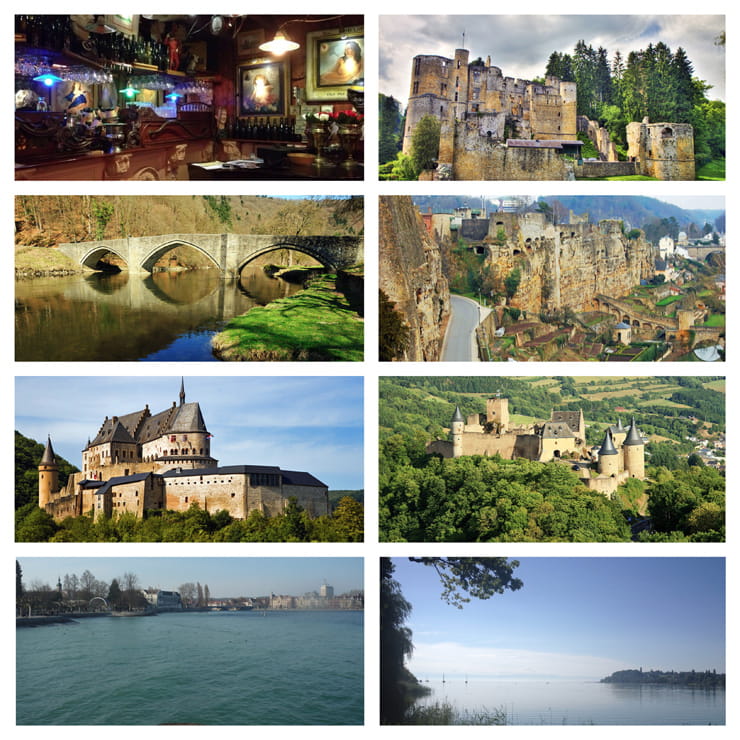 9 - The roads improve beyond Metz.

I turned left along the coast, looking for a more interesting route via Belgium. Ostend, Bruges, Antwerp, Ghent, Leuven, Luxembourg and Germany’s Black Forest via Lake Konstanz, the Swiss Alps and the Italian Dolomites – Via d’Umbrail, Gardena Passo, Stelvio Passo. Europe’s finest in less than 20 words. The latter is in northern Italy near Bormio and, at 2757m above sea level, the highest paved mountain pass in the Eastern Alps, and the second highest in the Alps. My journey continued through Passo di Gavia, Tonale Pass, Mendola Pass, Bolzano and Pordoi Pass before I reached Austria, and Faak.

Put it like that and it sounds simple, but for a few hours, late on in day two, slithering through deep snow, I really didn’t think we were going to make it. 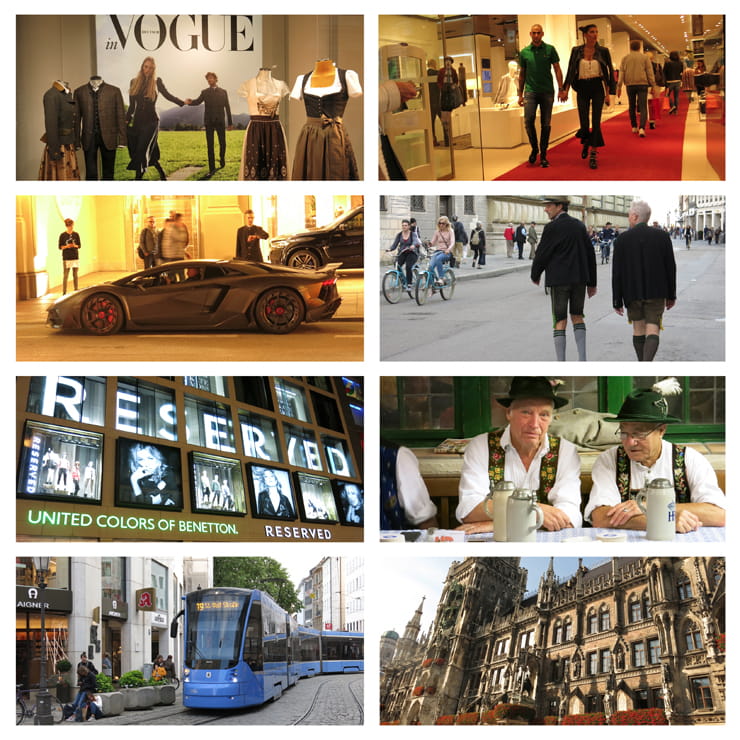 I’ve done less than a mile in the last 70 minutes, following a line of traffic slithering and stopping. Inch by inch we get closer to the hotel. My flip-up helmet has frozen shut, fingers are two steps colder than numb (summer gloves) and my eyes are hurting after a day being rained, hailed and snowed on. Having to ride visor up in this weather should make it worse, but in truth, it can’t get any worse. Grip. Slip. Wobble. Clench. Repeat. 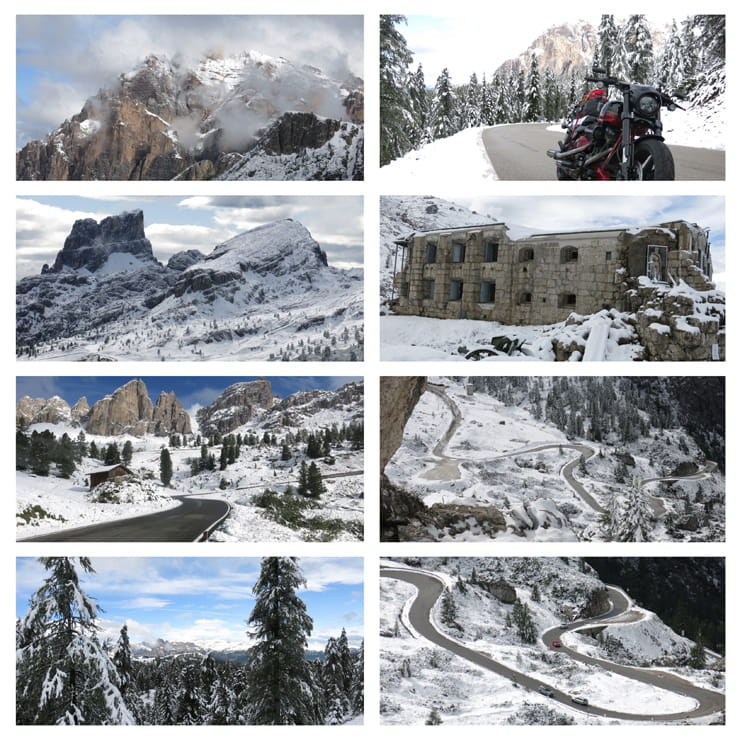 The sound of a £22K motorcycle landing on its exhaust. We’re on the floor. Not hurt, but not especially keen to get up and back on either. The bike’s not badly damaged apart from the exhausts, which are due to be replaced anyway. Come on Kane, pull yourself together.

Get up, get on, start the engine. Clutch out gently, but no…the wheel spins, bike goes sideways and we’re down again.

Right now, this is the worst ride of my life. In two weeks time, recounting the tale it will be the wide-eyed, Go-Pro’d talking point that I’ll be dining out on all winter. Maybe I’ll skip over the bit where I leave the bike at the side of the road, catch a ski bus and head for the nearest village. Was I worried about leaving a bike worth more than my first house at the roadside? No, not really. At that moment I didn’t care. If I couldn’t get it off the mountain, no one else was going to either. 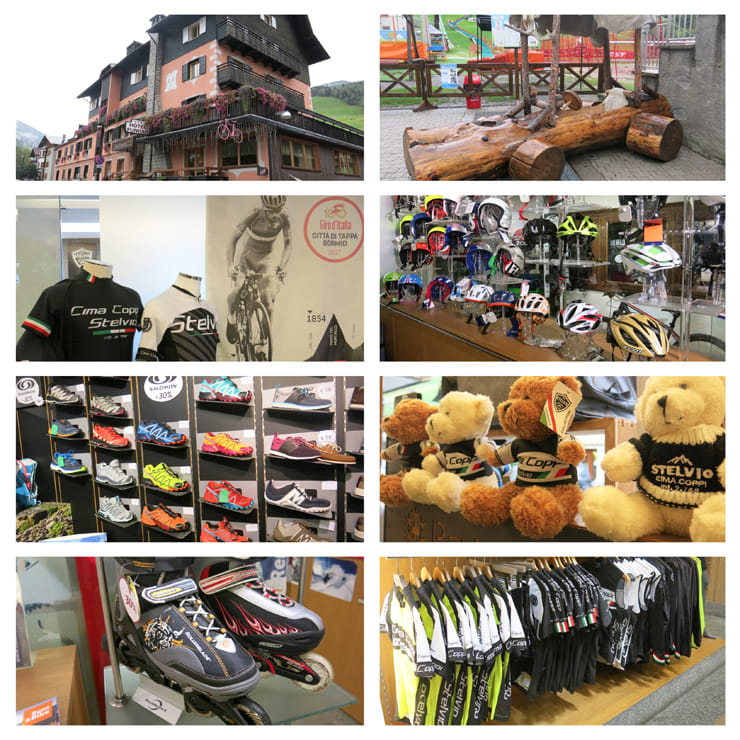 I stop at a small shop in a village, now only a two mile walk from my hotel and ask if I can stand inside to get warm and dry out. The owner says no, suggesting I go to the hotel down the street.

It seemed like a good idea to avoid higher rates and searching for a place en route. But you need to factor in time for bad weather. Sections today that should have taken two hours took six and if I’d been able to stop and find a hotel when the weather turned, it would have been a whole different trip. 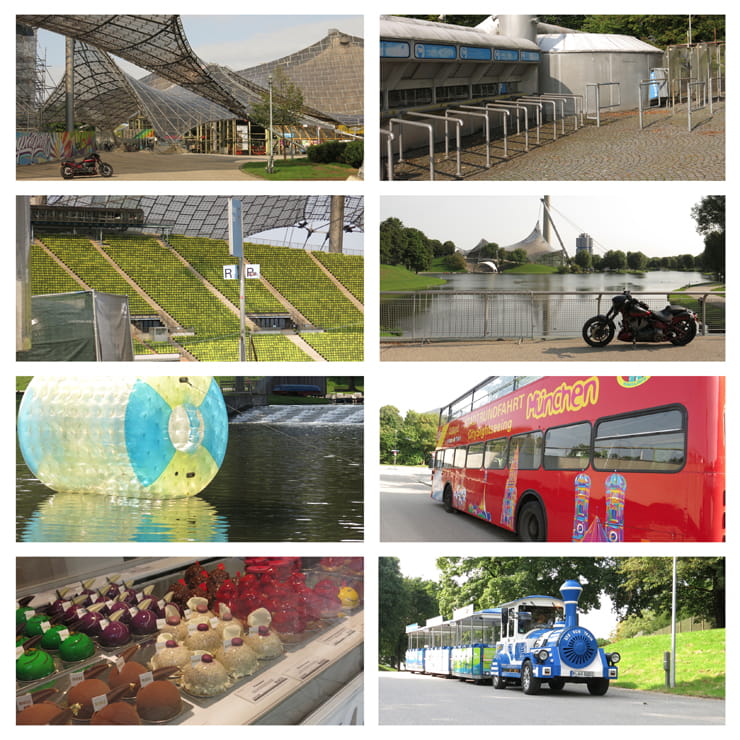 16 - Things will always get better.

Faced with a blue sky in the morning and fresh enthusiasm, I hope the bike will be where I left it on the pass. To be honest, I wouldn’t have been disappointed if it was gone – I could always fly home. After retrieving the bike, that feeling vanished instantly when I rode through the snow-capped peaks on a relatively dry road. All the roads in the mountains are great and even better when they are dry. The best views were in the snow-capped Dolomites and the best road I have ever ridden was an unnamed road in Pontebba, a commune in Udine in the Italian region of Friuli-Venezia Giulia.

I saw people doing Via Ferrata in the dolomites you can climb following a protected path. There are iron cables steps or ladders, along the natural conformations and the walls. 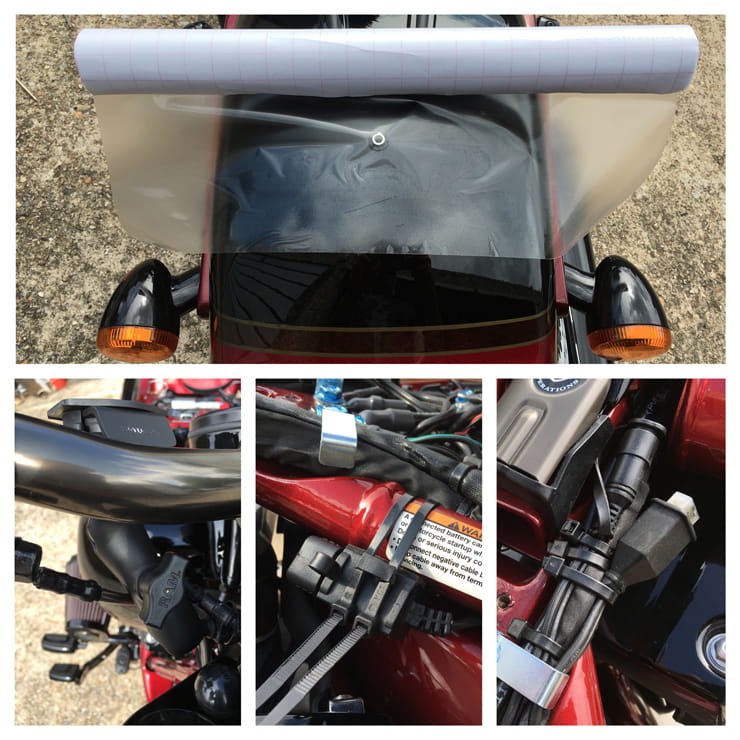 Things to do in Faak

17 - Bike preparation makes all the difference

I tweaked the controls for a comfortable ride, fitted my sat-nav, a wiring loom for my Gerbing heated clothing, and a USB charging loom for phone and camera. I also put clear adhesive shelving paper on the rear mudguard, gaffer tape and adhesive rubber padding where the tie downs would rub against the bike and insulation tape on the rear foot peg brackets for the same reason.

Tie down straps are more secure than bungees meaning your bag is less likely to move around. I also took a few bungees and zip ties (you can never have enough zip ties).

You must carry a breathalyser in France, two if you have a pillion. You also need to carry a high-vis vest or jacket in case you break down. You don’t have to wear it on the bike, but on Autobahns, where some traffic might be doing twice your speed it’s not a bad idea to wear one. You also need a GB sticker on your number plate and, if necessary, a light deflector on your headlight. (I never had the GB sticker and was not challenged.) 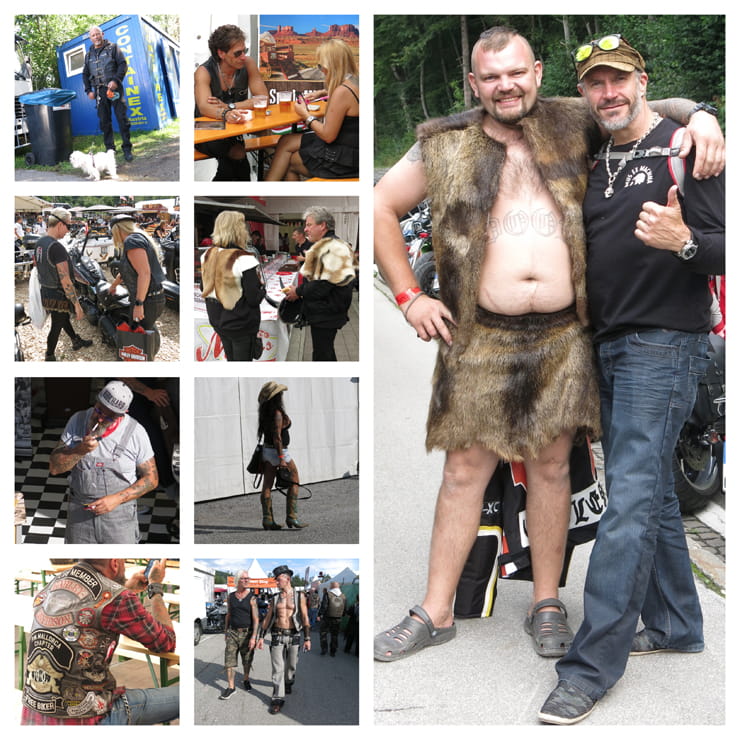 The people of Euro Bike Week

In Austria, Bulgaria, the Czech Republic, Hungary, Romania, Slovakia, Slovenia and Switzerland you need a vignette. These are basically road tax stickers for driving on principal motorways, and you must buy a different one for each country that requires it.

A ten days vignette costs EUR8.30, while the minimum fine for not having one is EUR120 plus the cost of the vignette. If you cannot pay immediately, the fine goes up. Buy them at the border or the first option afterwards. None of the vignettes I bought were checked at any point, but suspect they would have been if I had been stopped for a traffic offence or involved in an accident. I am told they do spot checks on motorways. 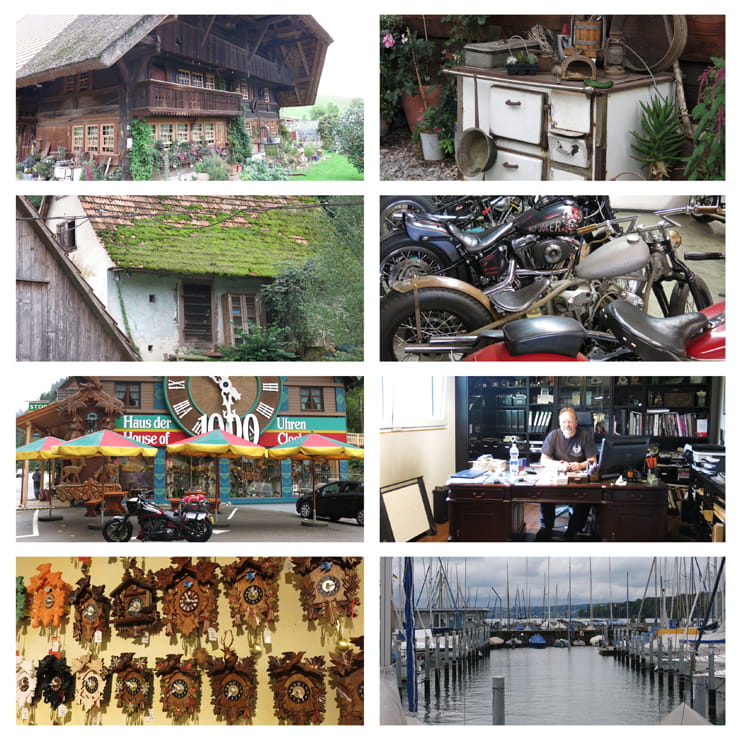 My fuel tank does 165 miles before the reserve light flickers on and I never had a problem with fuel stops. A lot of stations are 24 hours and allow you to pay using automated credit card machines. There are frequent ‘rest’ areas that have restroom facilities, some even have self-cleaning toilets, ambient lighting and music!

23 - Cruise control is a great invention

The best invention for a bike, once set you do not have to worry about watching the dash. Instead, you can take in the scenery and be more aware of traffic conditions.

I made another list of 'things you can do with the Cruise Control turned on': adjusting gloves, jackets and zips with your resting right hand, hand gestures at polite-vest bikers – no officer, I never did any of this! 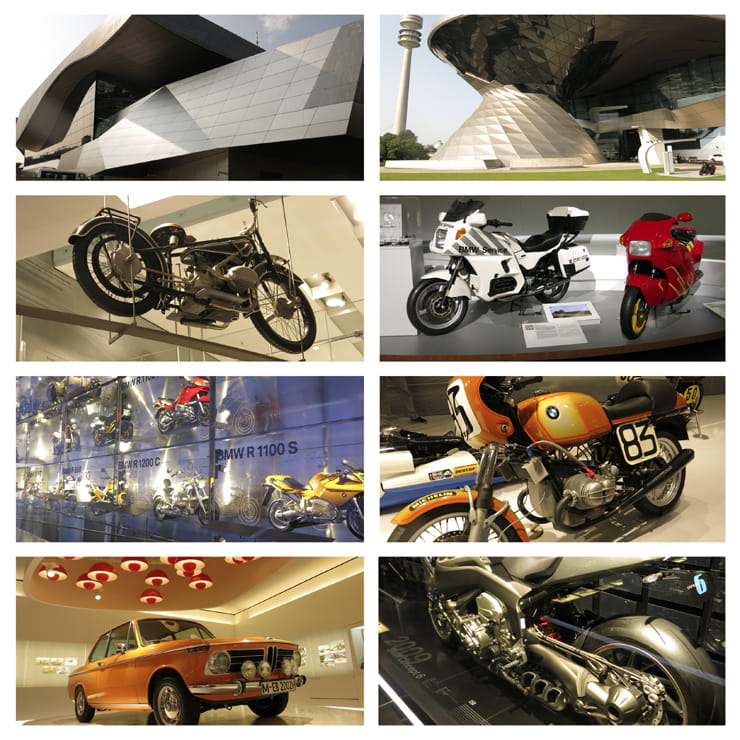 I found a village called Guarda in Swizerland like this. Being off season I never saw a soul. Guarda in the Lower Engadine is so beautiful a village that it was awarded the Wakker Prize.

I took another wrong turn and found the coolest old school Harley shop in the South German Black Forest. I had a coffee and met Achim the friendly owner, who gave me a tour of the bikes and the workshop. UHL Customs.

All road lines, manhole covers and tram lines are still like riding on ice in the wet. I was reminded that even a 240 rear section is not immune.

Powering up the massive torque is delicious fun. Gearing down quickly in the wet is just as exciting with all that engine braking. The back steps out really quickly. I had to finesse the bike through the steep downhill turns in the mountains. 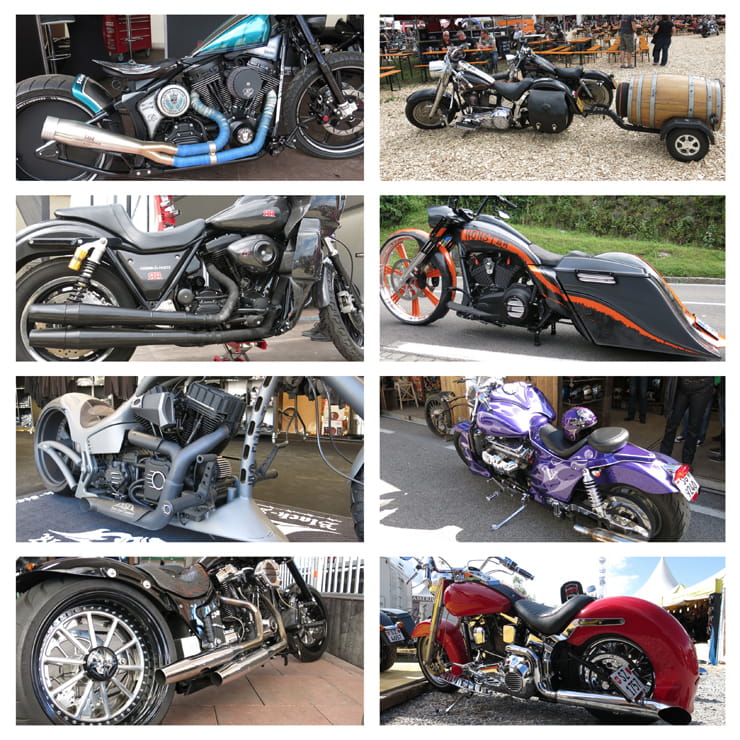 27 - They enforce noise levels strictly on the continent, especially at borders.

At Faak I had Jekyll & Hyde exhaust fitted.

The system has an electronically controlled valve system built in with three modes; stealth, 50% (which is similar to standard) and thunder. Even in thunder mode there is slight noise restriction and flow is via a catalytic converter.

When I approached police I thought it polite to hit the stealth button too. The system comes with a noise certification card if they take a closer look at you.

Thunder mode is music and food for my soul!

28 - Plan in an extra couple of days to get home and enjoy some sight-seeing.

Things to see on the road: 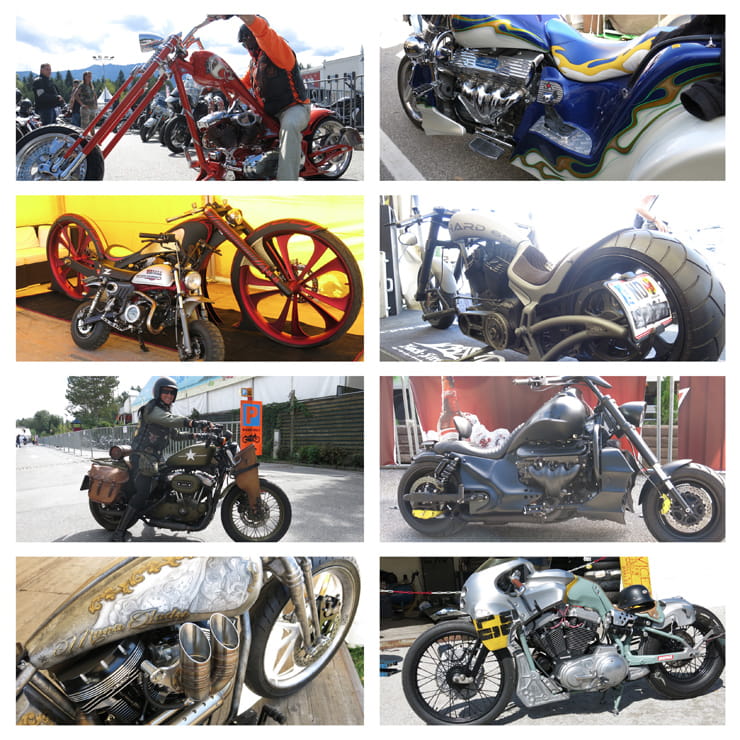 The sights don't end there. Try: 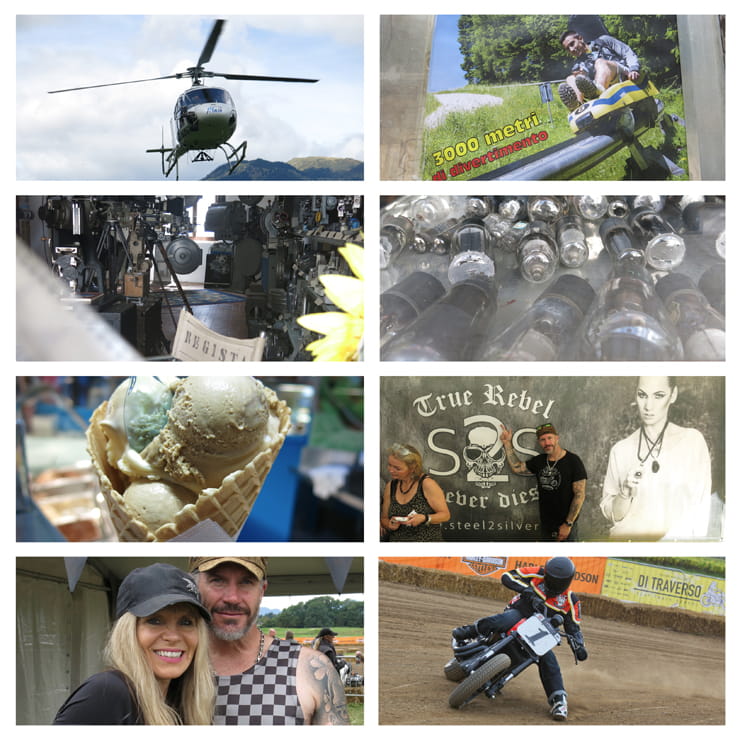 Bike Week is amazing in itself, if you are part of the Harley crowd, but, in reality, the event is just a destination. It’s the adventures you have getting there that really make the memories.