Top 10 bikes from the Goodwood Festival of Speed 2018

Charles Gordon-Lennox, Duke of Richmond and owner of the Goodwood property in West Sussex, recently showed the first bike go up to the hill back in October 1992 – the Ducati 888 SP4, serial number 254. At the time the new and exotic bike was produced in a limited edition and the last one of the series came equipped with full Ohlins suspension and a white frame.

Twenty-six years later, the scenery is totally changed and, from an exclusive meeting for few aristocratic petrolhead enthusiasts, the Goodwood Festival of Speed has become the largest motorsport event worldwide, with over 200,000 attending.

If you like speed and to breath exhaust gas and burnt rubber, this is the place to be. In fact, the Goodwood FoS is not even held on a circuit, just a 1.16-mile strip of asphalt in front of the home of the Duke and Duchess of Richmond. Hundreds of collectors and riders from all over the world met on a beautiful July weekend to show off their jewels in front of the crowd of thousands. This year there was an entry list of 65 motorcycles, among them classic and modern racing, superbike and American flat trackers. Here are our top ten motorcycles from the Festival of Speed 2018. 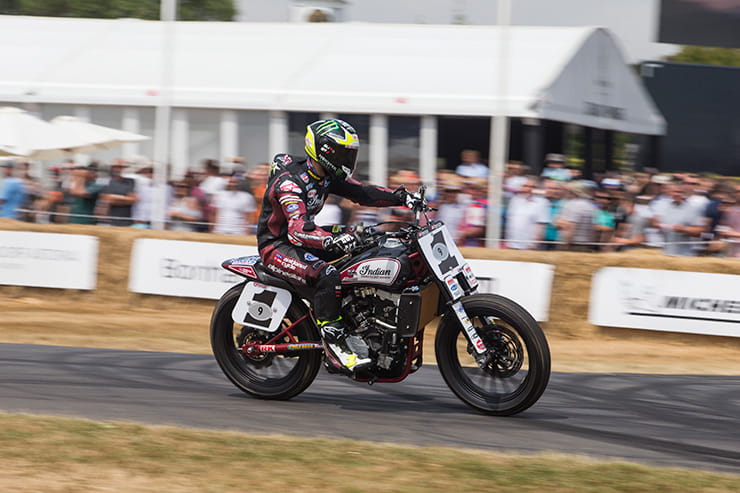 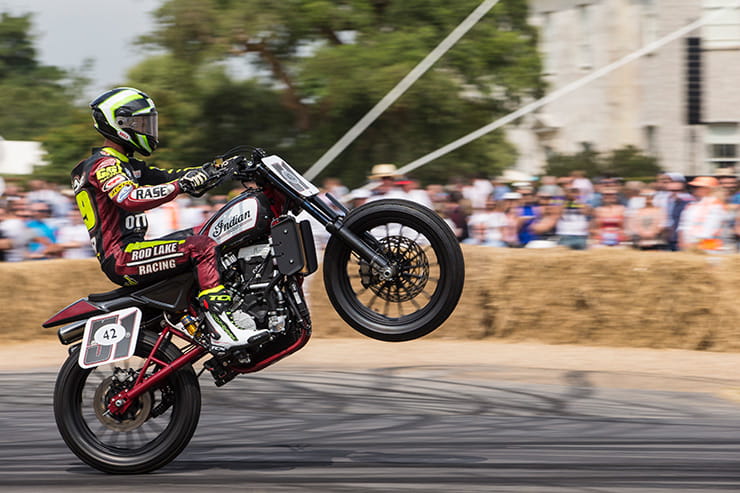 The queen of dirt ovals gave Goodwood’s hillclimb the sound of a road superbike in the hands of Brad “the Bullet” Baker, AMA Pro Flat Track Championship and Factory Indian rider. Pushed by a 750cc V-twin developed by the engineering company Swissauto Wenko, the FTR will be produced in a limited edition of 50 units for gentleman-riders ready to spend €50,000 for the base model. 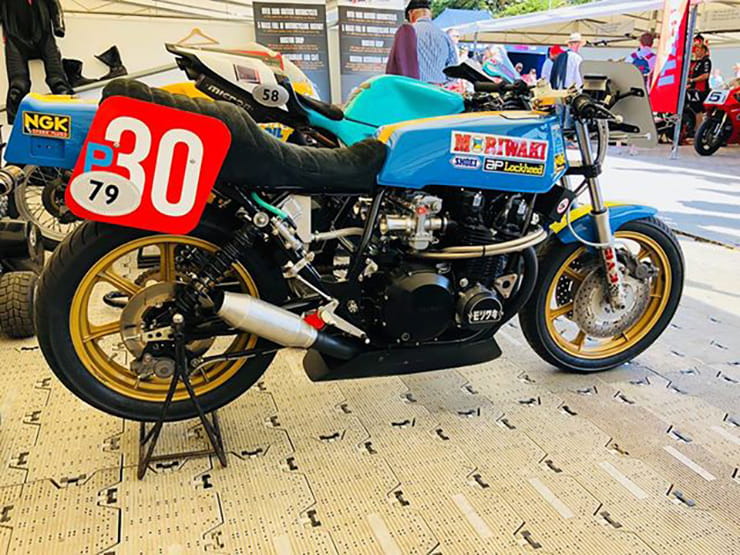 This is the bike tuned by Mamoru Moriwaki starting from a Kawasaki Z1 and became famous worldwide thanks to the talents of New Zealander Graeme Crosby.  At the time when a full fairing and clip on handlebars were considered compulsory for a racing motorcycle, Croz’s machine was equipped with a drag bar and lower seat, like a chopper. Despite the appearance, the Moriwaki-Kawasaki 1100 TT F1 was competitive and Crosby took third place in the 1979 TT Formula 1 Championship. 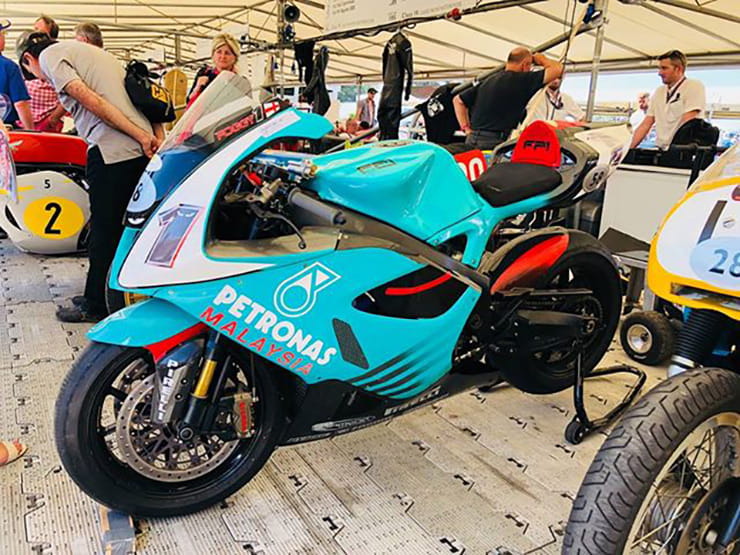 In motorcycle history, there are only two riders that gave their name to a motorcycle: Kenny Roberts and Carl Fogarty. Both have Malaysian sponsors in common, Proton for King Kenny and Petronas for King Carl. The FP1 is an 899cc in-line triple engineered by Sauber and was able to reach 185bhp. Though never enough to win a race in its short career, it was always good for the Goodwood hillclimb. 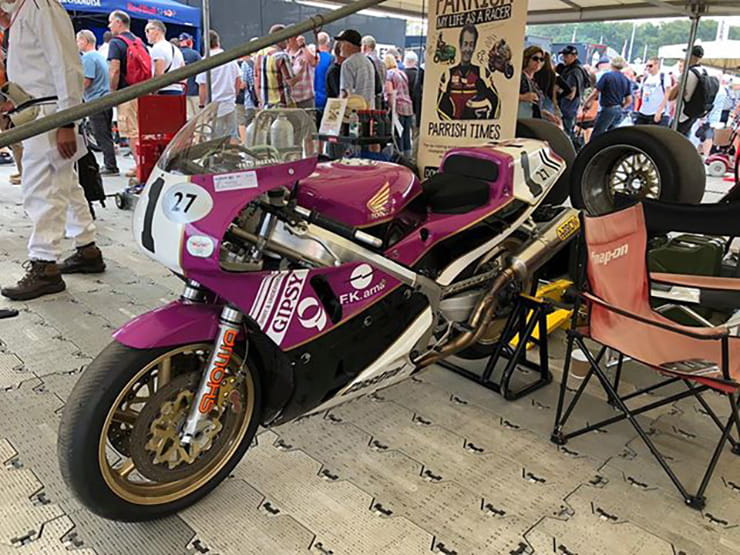 This is the Fred Merkel bike, the first winner of WSBK way back in 1988 for Italian team Rumi. The owner, Oscar Rumi, was the son of Donnino Rumi, artist, painter and owner of Rumi motorcycles who produced some of most significant two-stroke sports bikes of the fifties. Fred was a fast and consistent rider and he won WSBK title twice because his engine was specially prepared by the Faccetti brothers, masters of engine tuning for rally and touring cars Alfa Romeo, BMW and Lancia. 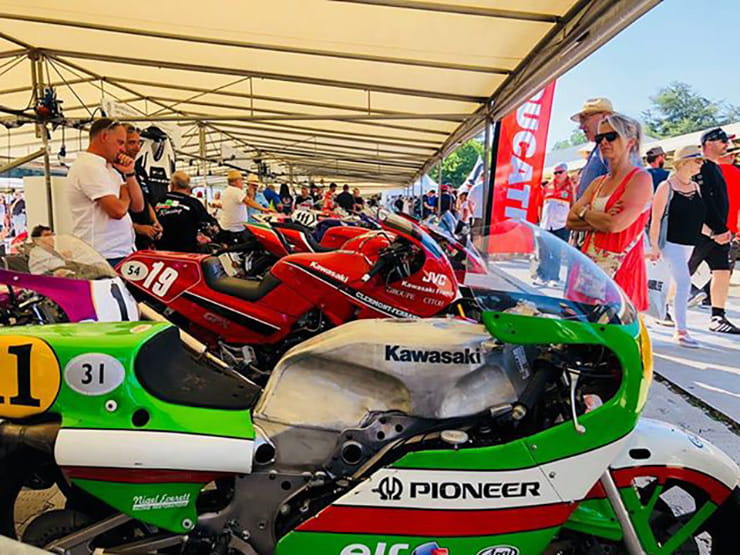 Kawasaki is the only one among the four Japanese brands who did not win a world title in the premier class, despite the KR500 being an amazing race bike. Thanks to its aluminium monocoque frame, the KR500 was the lightest, stiffest and most aerodynamic motorcycle of its time, but its rider, Kork Ballington, took only two third places in 1980, which were his best results. Nevertheless, at FOS the KR500 climbed the hill with Jonathan Rea, so maybe an all new Kawasaki MotoGP bike is coming! 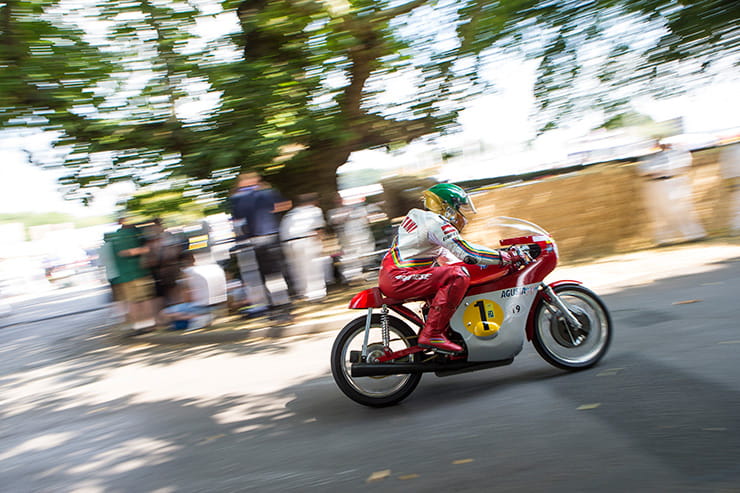 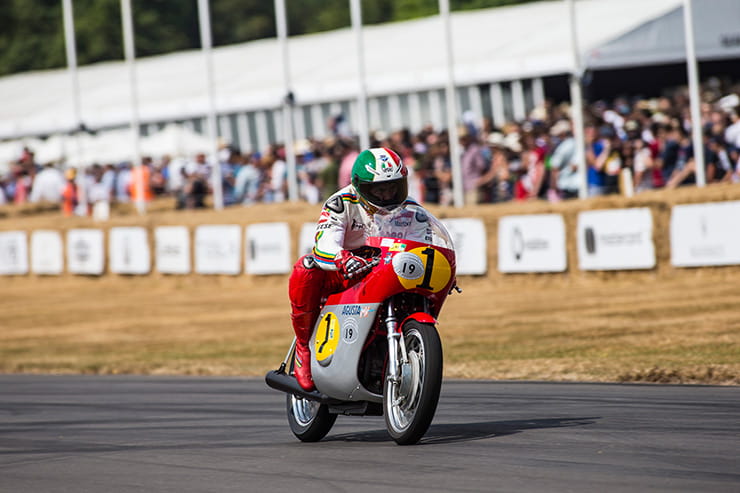 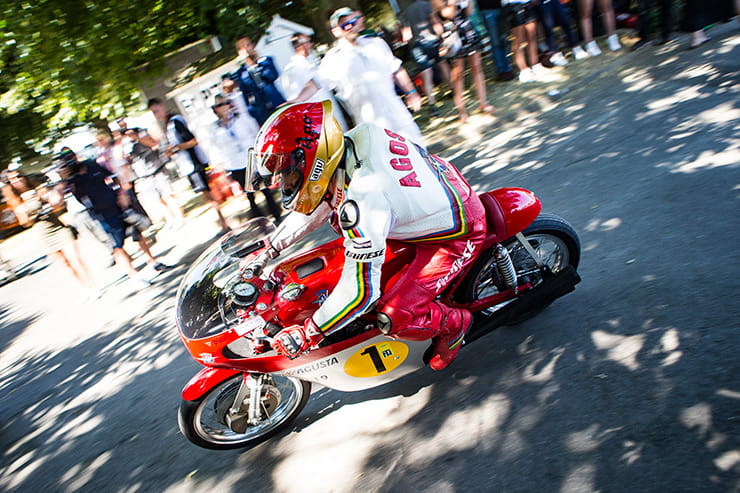 This is the most significant bike for Giacomo Agostini. The 15 times world championship, who will attend at Goodwood next week. He achieved his first title in 1965, in the 350 class with the triple. A new bike took part in the 1966 season, powered by the triple instead of the four-cylinders that won four titles with Hailwood. Later Mike the Bike moved to Honda, so Agostini was satisfied and the Italian won seven of the eight titles in the 500cc class to add to his incredible career. 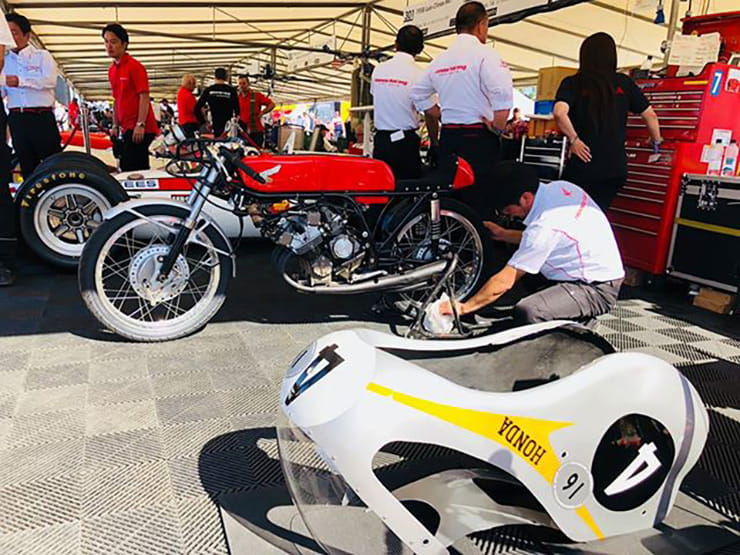 Honda took part at the show with its huge range of classic motorcycles and brand ambassadors, like Freddie Spencer. Certainly the NS500R is one of our favourites, especially the 1985 version in the Rothmans colour scheme. Nevertheless, one time in the life of every motorcycle enthusiast the sound of the RC 175 six-cylinder machine must be heard. Capable of 60bhp at a stratospheric 18,000rpm, it was the Jim Redman bike, the only rider with Mike Hailwood who won three races in a day. 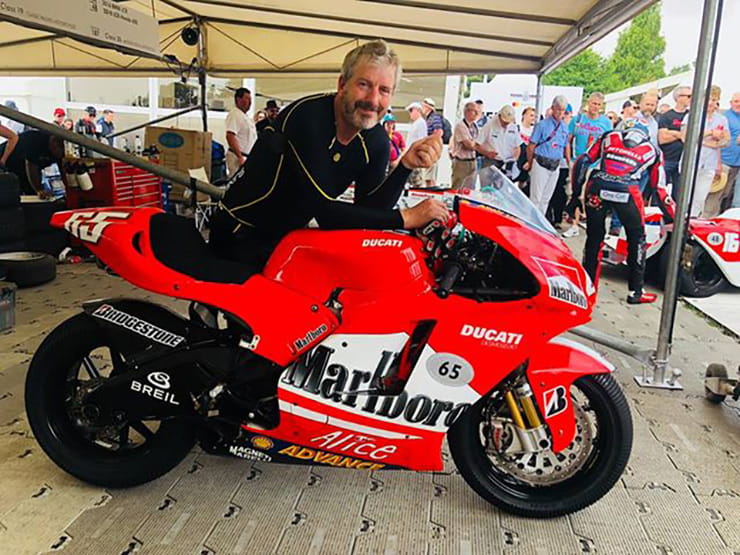 Ducati displayed plenty of racing bikes from its history. We saw the 888 Corse, the customer version of two times world champion Doug Polen and also a 900SS that won the 200 miles in 1972, and many others contemporary models but only one is capable of spreading fear like a shark in the ocean – the Ducati GP5 – 230bhp from 150kg, and managed by primitive electronics. Insane! 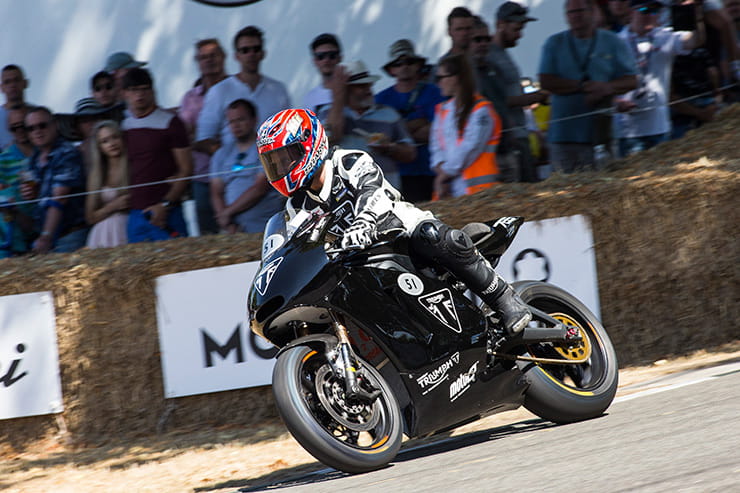 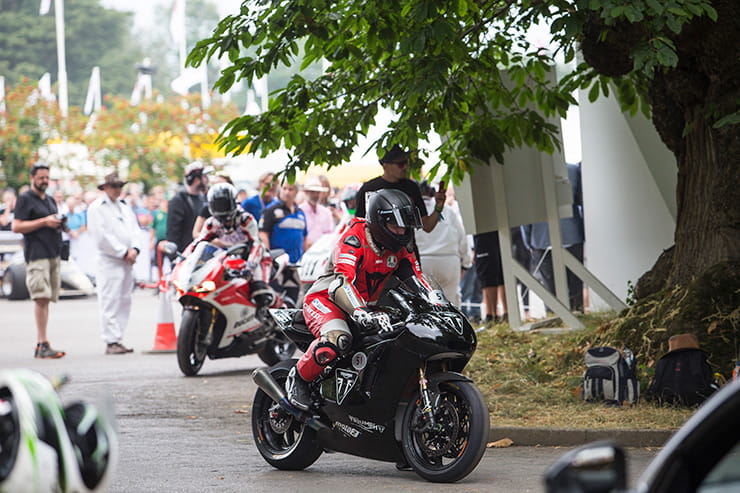 After many bikes of the recent or distant past, here we have a bike of the future. As everybody knows, starting from next year Triumph will supply the Moto2 class with its 765cc triple. We heard its voice echoing through the Goodwood hillclimb for the first time worldwide and it was great, like a small MotoGP bike should be. The lucky people who rode the first 2019 Moto2-engined bike in the UK were Carl Fogarty, Gary Johnson and our very own Michael Mann. 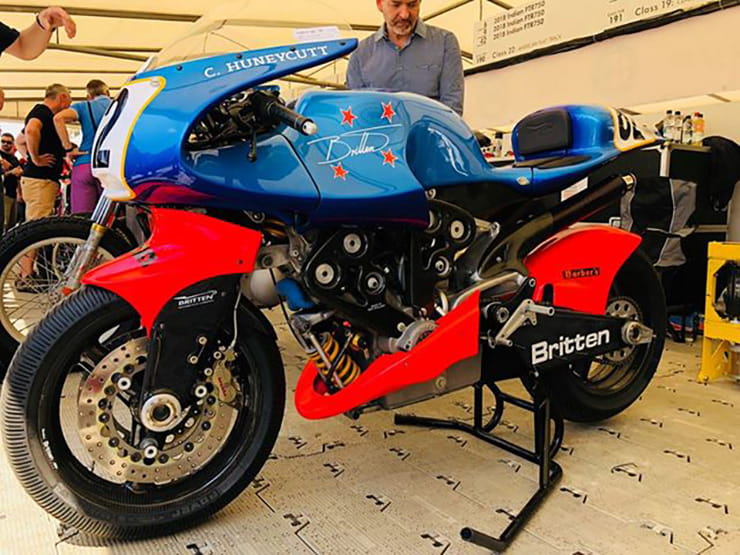 There is something magical about New Zealand and motorsport. This amazing, small and remote country (from Europe at least) created legends such as Bruce McLaren, Chris Amon, Burt Munro, Graeme Crosby and John Britten. The latter’s V1000 is still one of the most innovative and original motorcycles ever created and despite it being handcrafted, its V-twin runs almost as silently as a Euro4 yet still able to deliver 166bhp to the rear wheel. The bike we saw at Goodwood came from the Alabama-based Barber Museum and was one of 10 produced in stock version. Value: more than £250,000.