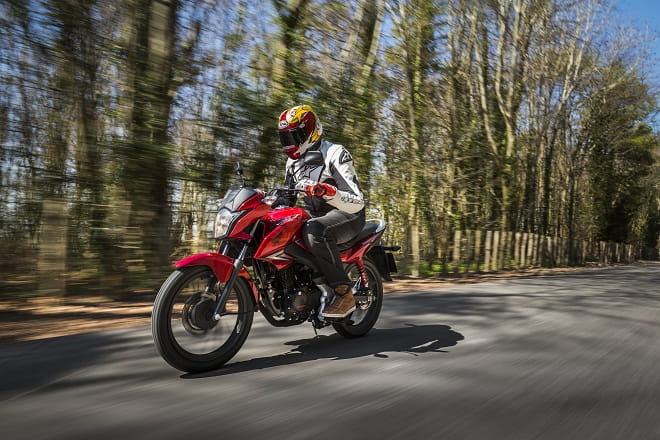 
THE COMBINED POWER of the twelve Honda CBF125F’s parked outside makes 124.8bhp, some 60bhp less than the one Yamaha R1 I was riding last Tuesday.

But that doesn’t make the new Honda CB125F less fun, or less important, and one thing’s for sure, the R1 couldn’t hope to match the claimed mpg of 145 that Honda claim for its new learner-friendly bike.

The CBF125 has been Honda’s best-selling bike in the UK since its launch in 2008 and the best-selling motorcycle in the UK since 2009. They’ve consistently sold 2000 a year and that means there’s a whole load of CBF125s getting new riders on to bikes, and make it arguably one of the most important motorcycles to be launched in 2015.

Unsurprisingly 80 per cent of people buying the CBF125 are new to motorcycling, yet they’re not all youngsters getting on two wheels. The average age of people buying CBF125s is 36-years old.

It’s this figure, and the fact that the average age of a big Honda motorcycle riders in the UK is 50-years old that has prompted Honda to give a real push to try and get new riders on bikes.

They plan to get some 3000 people to experience riding motorcycles in 2015, including attendance at events across the UK, riding schools, the Ron Haslam Race School, the Dave Thorpe off-road experience and the launch of the Honda School of Motorcycling. Get bums on seats, enjoy motorcycling and we might have riders of the future.

In theory, the future of motorcycling in the UK depends on it.

Honda UK’s motorcycling boss Nick Campolucci is the mastermind of the scheme which will use all new bikes in a typically Honda environment. He said: “We want to put our arm around the customer and take them on that journey and give them the right introduction to motorcycling. We don’t want them to turn up and ride a ten-year-old CG125 covered in Gaffa tape.”

The A1-licence friendly CB125F’s will be a key part of this, hence why it’s such a big bike for Honda. 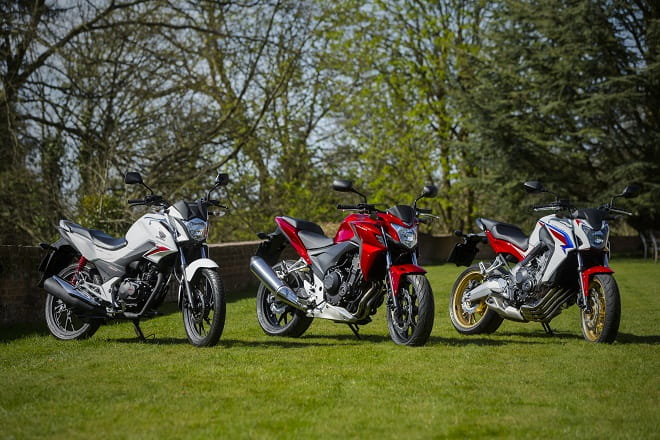 The bike features a new frame, new wheels in the style of the bigger Honda bikes, improved fuel injection, increased mpg to a claimed 145 miles per gallon, new clocks, a gear indicator and styling that mimics the bigger CBs in the Honda range – the CB650 and CB500F. There’s also red pre-load adjustable rear shocks with red springs, a black engine and a red Honda badge.

At 128kg wet (compared to the Forza 125 scooter at 158kg wet), the bike is a featherweight. It makes 10.4bhp and looks much sharper than the old bike, despite losing the side fairing of the CBF125.

As you might imagine everything is incredibly easy to use. There’s more steering lock than the old bike so feet-up U-turns are easy even for a new rider and the clutch is incredibly light, one finger is all you need if you’re experienced.

Everything on this bike has been thought about for learner riders. So there’s no kill switch to fool unwitting learners who can’t work out how to start the bike when the kill switch is turned off, and the gear indicator is in the middle of the dash so it’s easy to read.

It’s gentle around town with nice fuelling and smooth power delivery all the way to the 10,000rpm redline, which I needed as I weigh around 16.5stone. The single-cylinder motor sounds harsh when revved but then it is being worked hard a lot. On a run the engine can carry even this six foot four, overweight rider to a cruising speed of 60mph, with the bike's top speed being roughly 70mph.

The gearbox is slightly clunky but then the bike I rode had only done a couple of hundred miles so will loosen up, but the brakes are powerful enough to lock up the rear wheel using the drum and the front disc brake has plenty of power, but not too much to overwhelm new riders.

In busy traffic like we encountered on the run from Windsor to Goodwood near Chichester and back, the acceleration is strong enough to keep pace with traffic and the bike is big enough to hold its own presence. It’s physically wider to look at than the old bike, and longer so it’s more stable at speed. 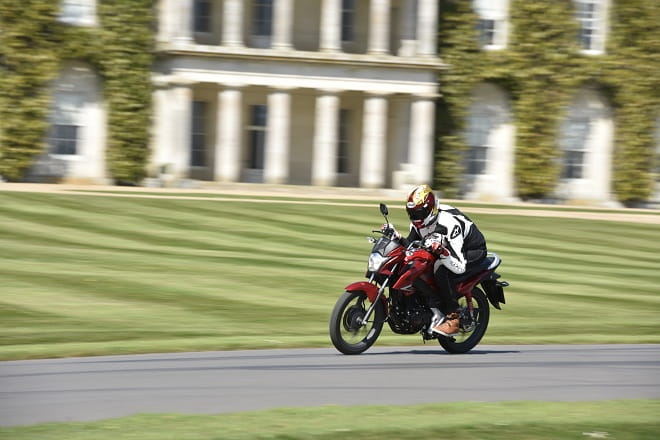 It’s very easy to slot across town and feel confident pitching it in to roundabouts. The tyres are incredibly narrow is you’re used to bigger bikes, but they work fine, and the suspension is damped well enough for more spirited riding and does an okay job of pot holes.

There’s a bit of a perception that 125s aren’t fun away from town but we found the opposite to be true. It changes the way you ride a bike if you’re used to a bigger motorcycle, and because of the relative lack of grunt and top-speed you have to plan ahead more, use more speed in corners to make up for the lack of acceleration on the way out of the bend.

But the Honda is more than capable of longer rides, handles securely and well enough to ride confidently on twisty roads, and was comfortable over the 125 miles we rode in a day. 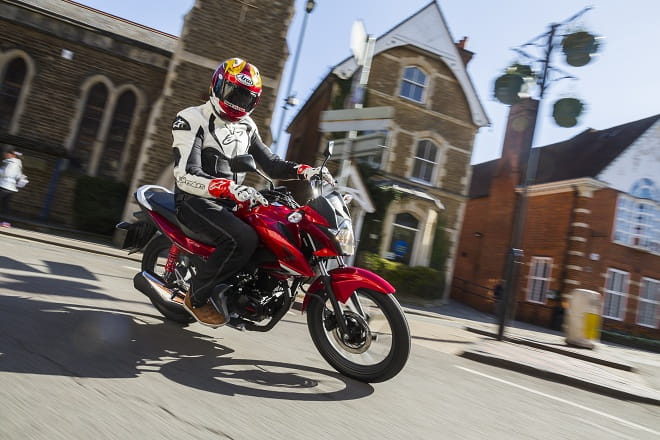 Admittedly I rode the bike incredibly hard on the test, but it seemed to run on air. The fuel gauge had barely moved at the end of the day and a quick gloves off calculation shows it did 110mpg over the day of being thrashed. That is amazing. Honda’s 145mpg claim should be true with more regular riding.

We won’t go in to the Moto3 style slipstreaming on the dual carriageways around the South East of England, but if we did, let’s say it is possible to make the bike do an indicated 78mph on the speedo.

All-in-all it’s a brilliant value, incredibly easy to ride bike that has some incredible finance offers and is backed by Honda’s record for reliability. As a first bike as an introduction to motorcycling, or an alternative to the car for riding to work across a busy city, you really can’t go far wrong. 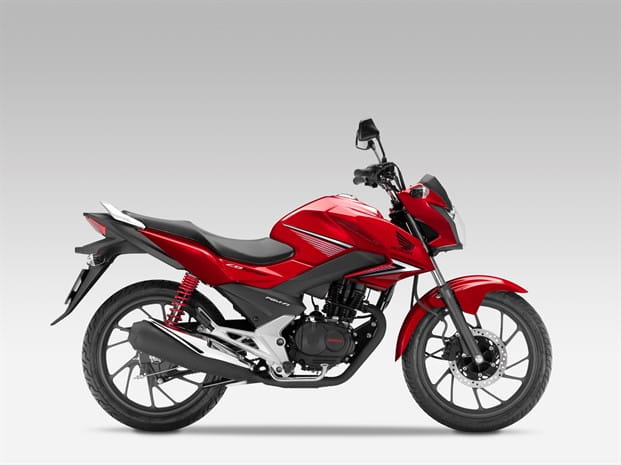 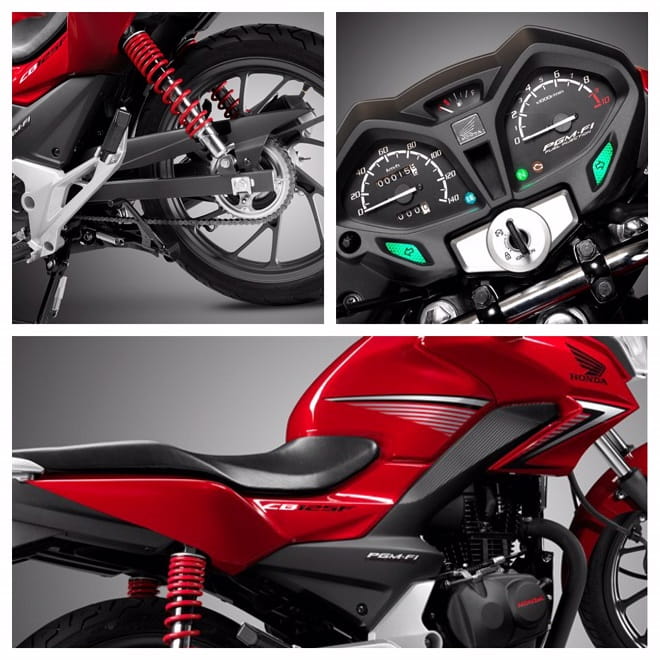 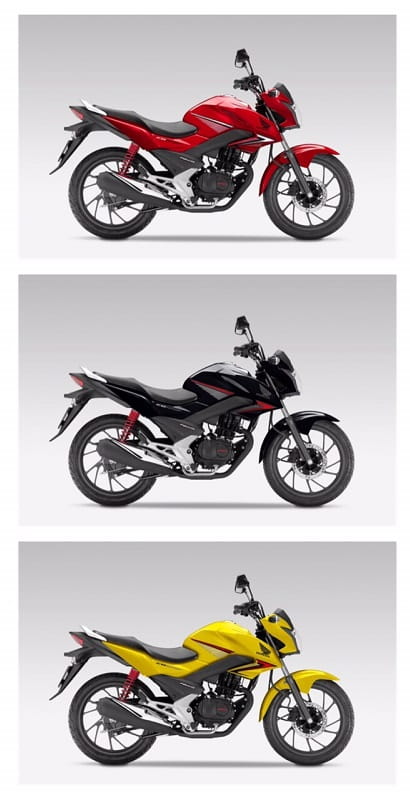 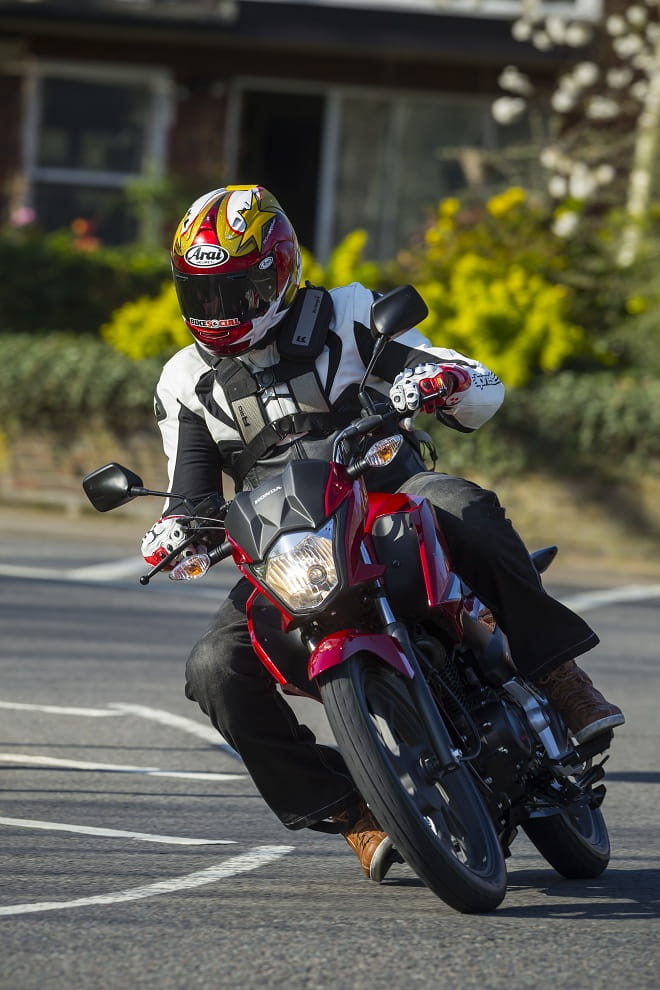