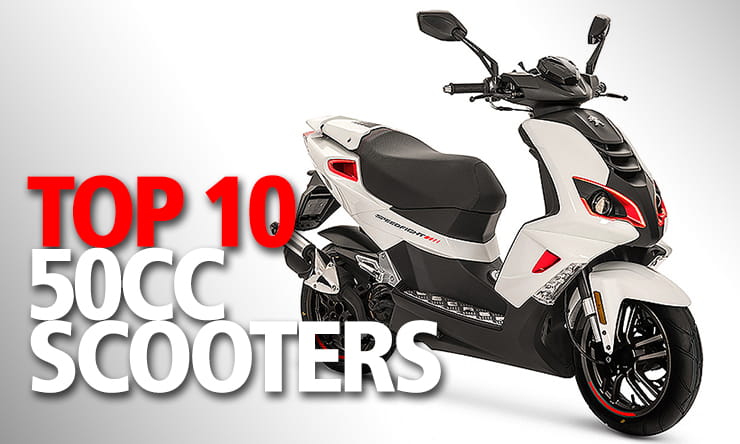 When it comes to getting onto two wheels for the first time, 50cc machines restricted to 30mph (to comply with the AM licence you can be eligible for at 16 if you have an AM licence and CBT certificate) remain the only way to go.

And, for many, the most appealing, stylish, affordable and east way to do just that is with a ‘twist and go’ 50cc scooter – and there’s a huge range to choose from.

For those wanting something sporty and stylish there are examples from Italy to China ranging in price from just over £1000 to approaching three big ones. If you fancy something more chic and maybe practical there’s the classic, retro-styled Vespa, semi-off-road rugged types, big wheeled city scoots that give extra stability, the list goes on….

So, what’s out there currently? What do you get, how much do they cost and what’s our pick of the best? Here’s out Top 10 50cc scooters of 2020 in ascending price order to help you decide… 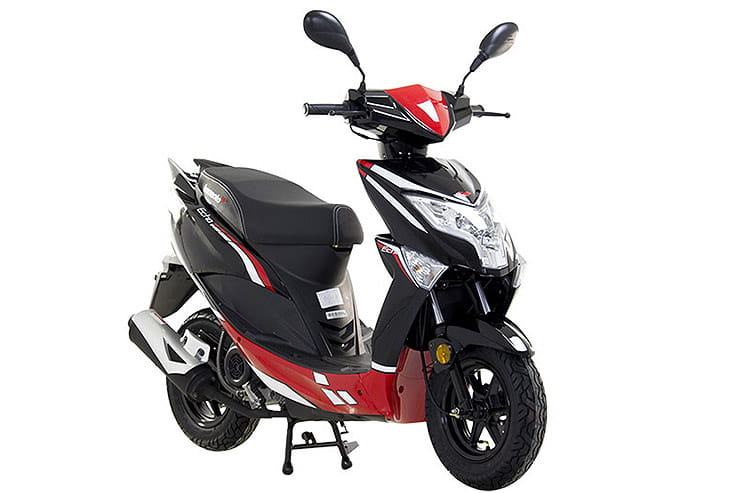 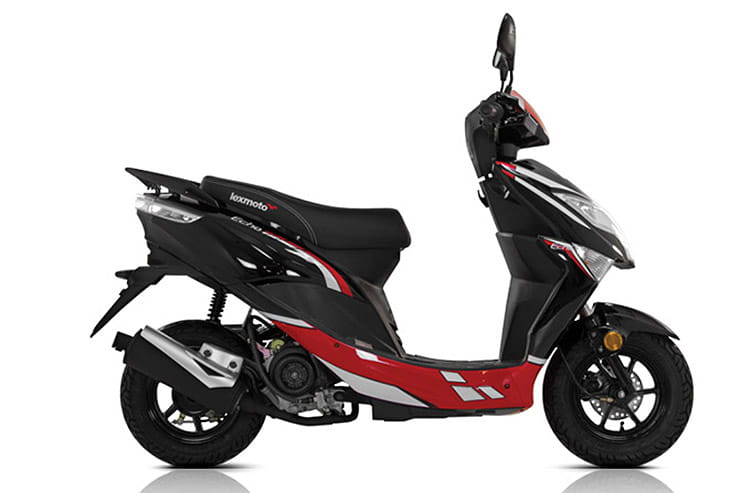 A perennial favourite and long-time best seller for one over-riding reason – it’s brilliant value. This Chinese built sports scoot has been around for a few years now but has a lot going for it, not least price. At £1099.99 it remains the cheapest new 50cc scooter on the UK market and is even more tempting when you consider it can be had on finance from just £21.20 a month (that’s barely one shift at McDonalds) yet it’s also a decent, credible sports scoot in its own right. The air-cooled engine delivers pretty much the same 30mph performance as any other; it’s got pukka sports styling; the usual, helmet-sized luggage compartment under the seat and straightforward, adequate controls. The small 10in wheels may make handling a little twitchy but it’s nothing to unduly worry about (and, if you do, the 12in equipped Echo 50+ is available for just £100 more) and there are plenty of dealers and a warranty. Sure, it’s no Honda or Yamaha, long-term reliability and durability may be a little suspect (but then, how long do you want it for?) and residual values aren’t great, but for stylishly getting on the road at 16 at a brilliant price it has a lot going for it. 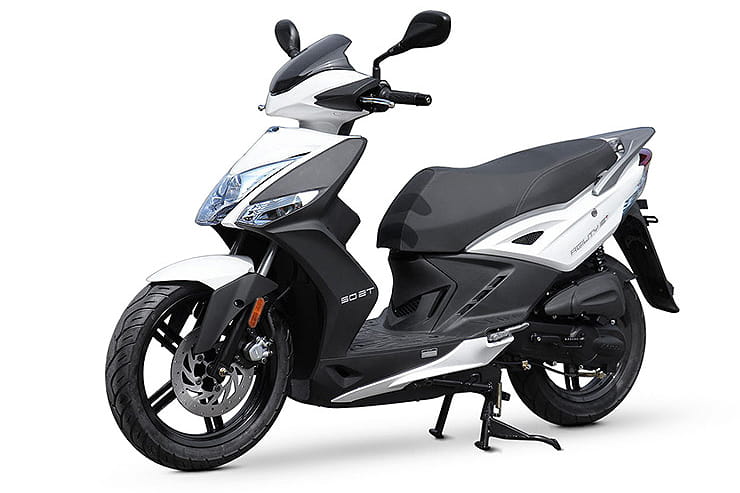 The introductory 50c offering from Taiwanese scooter specialists Kymco (who have also collaborated with Kawasaki and BMW on their scooter offerings) may be a little basic, but it’s a step up from the Chinese in terms of quality and reputation, benefits from a longer-established dealer network and proven mechanicals and yet still is brilliant value. Kymco currently offer three different 50s of which the more basic Agility is the cheapest. That said, its performance is on par with most others, it has 12in wheels and build quality is as good as any. And, if all that seems a little too basic for your taste, Kymco also currently offer the more stylish Super 8 50 (for £1859) and the retro, Vespa-styled and oddly-named Like 50 (for £1949). 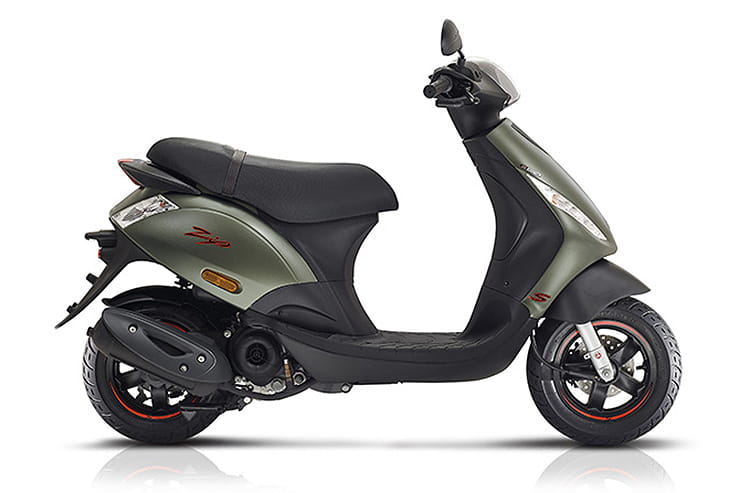 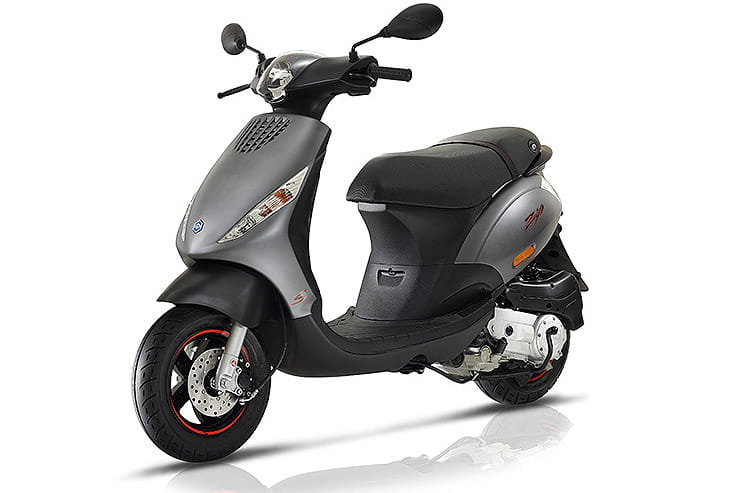 The small and straightforward Zip 50 remains the most affordable of the offerings from the established European scooter manufacturers being Italian scooter giant Piaggio’s entry-level model. The Zip’s actually been around now for around 20 years but it remains attractive. It’s a smaller, 10in wheeled machine and all-round proportions are on the cute side, so it suits smaller or lighter riders and shorter trips best. But it’s also ridiculously easy to ride and manhandle and ticks all the usual boxes of adequate 30mph performance and helmet storage under the seat – and all with the extra reassurance of the Piaggio brand and the Zip’s proven, durable history. 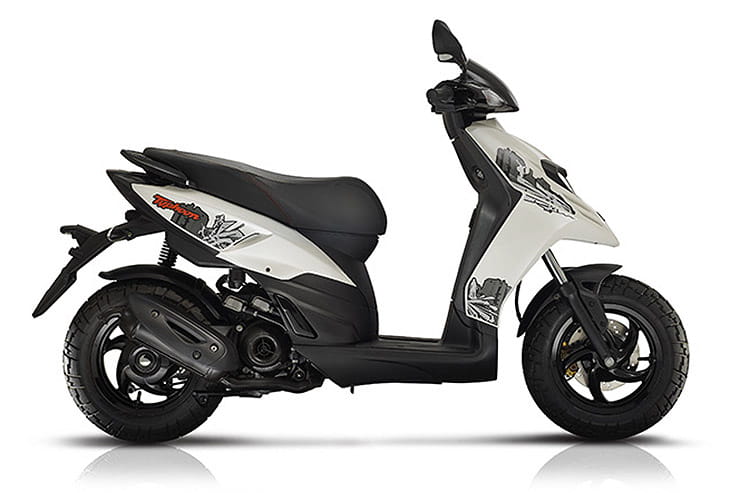 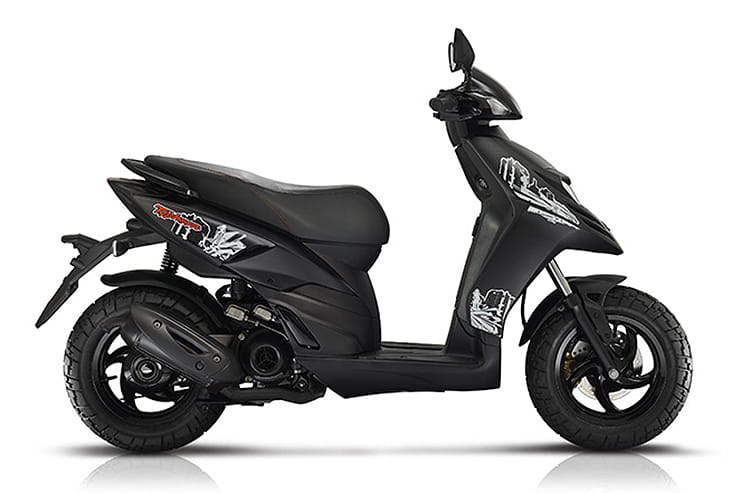 Another from Italian scooter giants Piaggio and another model that’s long-established and proven, being in its range now for well over 20 years. The Typhoon is something of an icon being the classic, surviving example of that popular, trendy alternative to the sports scoot in having slightly more rugged styling and fat, off-road influenced tyres on its 10inch wheels. As such, it’s definitely one for the ‘cool kids’ and, although its spec is nothing to shout about, its Euro4 compliant two-stroke single, as with all of the machines here, produces the same, regulation 30mph, and there’s little more than the usual underseat compartment and basic clocks including a fuel gauge, it remains a stylish, decent quality option – and one that’s pretty good value to boot. 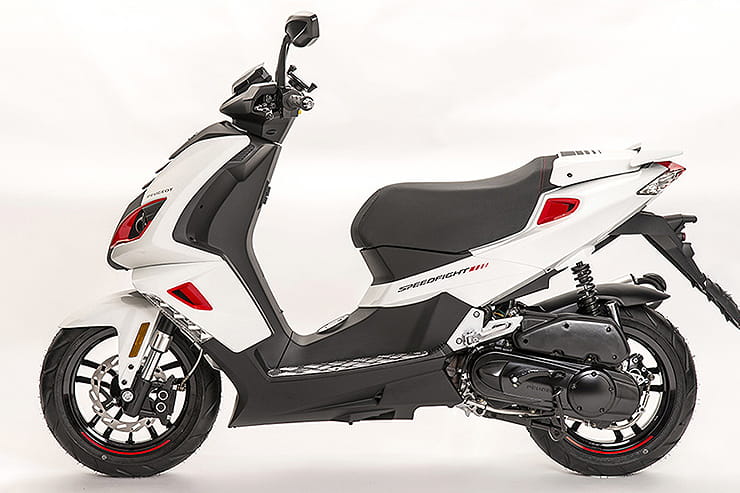 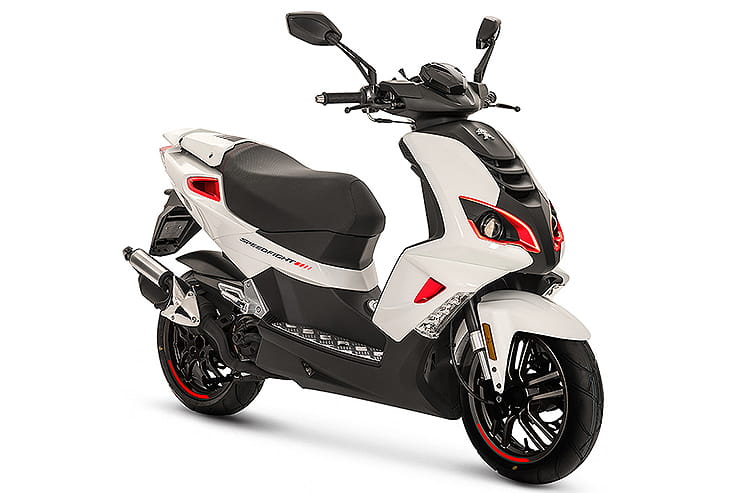 Ask any teen – or adult for that matter – to name a sports scooter and odds are the name they’ll respond with is that of the legendary Peugeot Speedfight. The then French firm (its scooter arm has since been taken over by Indian giant Mahindra) effectively invented the whole ‘sports scooter’ genre when it came out with its first Speedfight in 2000 which, with its sporty-styling, suspension and brakes was an immediate hit, set the template for the type and led to the Speedfight 2 in 2002, Speedfight 3 in 2009 and this latest version in 2014, available in both air and liquid-cooled versions and featuring projector headlamps, inverted forks and even radial-mount brakes. In short, for a sports scooter it’s still pretty much the definitive article and yet remains pretty good value, too! 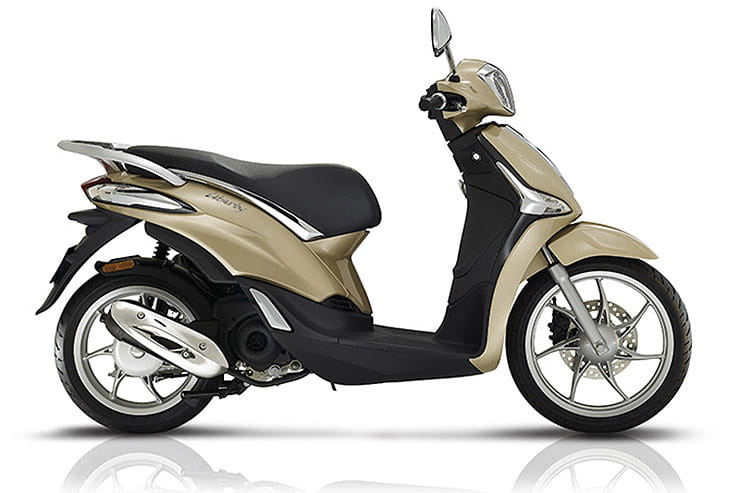 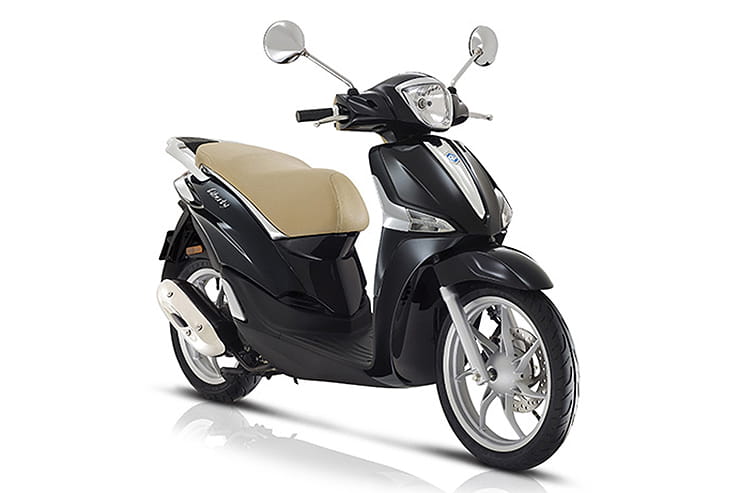 Here’s something a little different. Again, from Italian scooter giants Piaggio, the Liberty is it’s modern, chic, easily manageable scooter offering for the woman (or man) around town. Sober styling, neat design touches (including a built-in USB socket for phone charging etc.) raise it above more budget, youth-orientated offerings while its distinctive, large 16in front/14in rear wheels give great stability and easy, bicycle-style manoeuvrability. It’s powered by a bang-up-to-date, three-valve, four-stroke single cylinder engine claimed to give excellent economy and which comes in 50 and 125cc forms. The sober, sensible style won’t be for everyone and it’s not the cheapest but for affordable urban transport it makes an awful lot of sense. 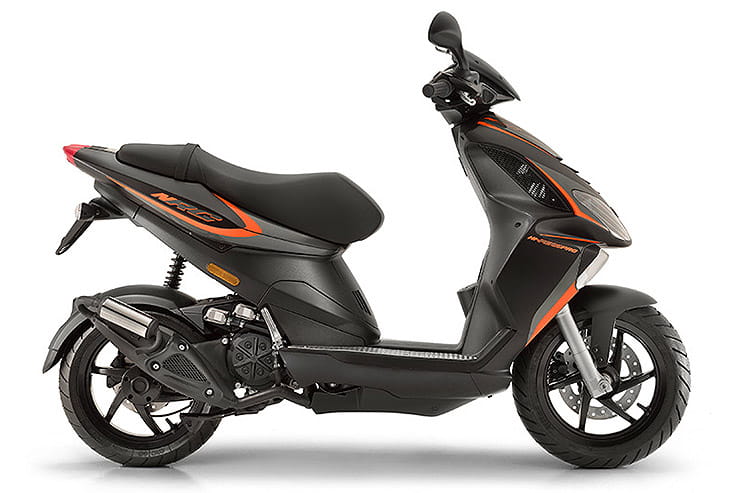 Yes, yet another from those scooter wizards Piaggio. The NRG (geddit?) is the Italian firm’s long-established sports scooter rival to Peugeot’s Speedfight and remains a tempting option – being slightly pricier than the Peugeot, but with a better dealer network and yet far more affordable than, say, Yamaha’s Aerox. Although its styling is now a little dated, although not by much, its spec remains decent with 13in wheels and disc brakes front and rear, a Euro4-compliant 50cc two-stroke motor, tubular steel double-cradle frame and recently updated graphics. On the slight downside, it hasn’t quite the allure or iconic status of the Speedfight or the modern solidity of the latest Yamaha, but it does fill a good middle ground between the two. 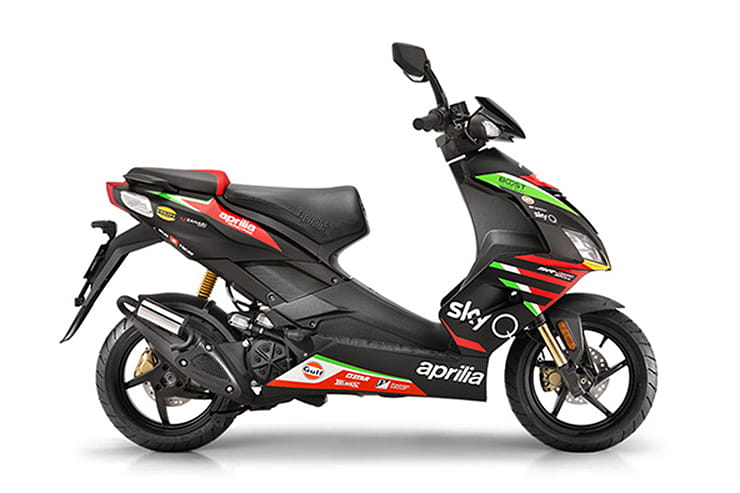 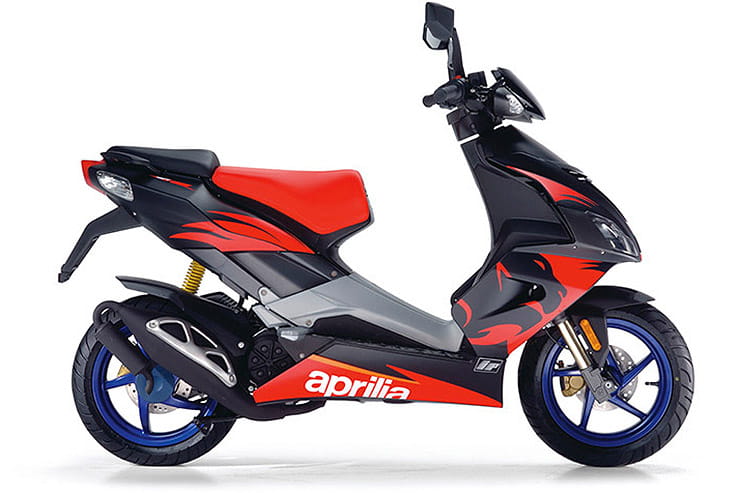 With Italian sporting legends Aprilia being taken over by Piaggio in 2004 this, technically, is yet another Piaggio product – in all other respects, however, an Aprilia is different. Where Piaggio has always been a scooter brand, Aprilia is just as famous for its lightweight sporting motorcycles, such as the iconic RS125 racer replica, and its racetrack success, having notched up a massively impressive roster of GP world championships, particularly in the 1990s. Today, that sportsbike emphasis continues, most obviously with its RSV4 superbike and upcoming RS660, and all its previous scooters have fallen by the wayside – except, that is, for the brilliant SR 50. A 50cc sports scoot in the classic mould, the SR standard out for its quality, style and proven performance – and this is reflected in its high demand as a used scoot, too. Last significantly updated in 2008 it remains modern and sharp looking and is well built although its spec and performance isn’t significantly different than any other. What is, however, is its credible GP style, being repeatedly offered in limited edition race replica colour schemes, and its reputation. If the base version doesn’t give you enough of that, the current replica, the SR 50 R GP Replica, in MotoGP-aping livery, for £100 more, will make you the coolest 16-year-old around. 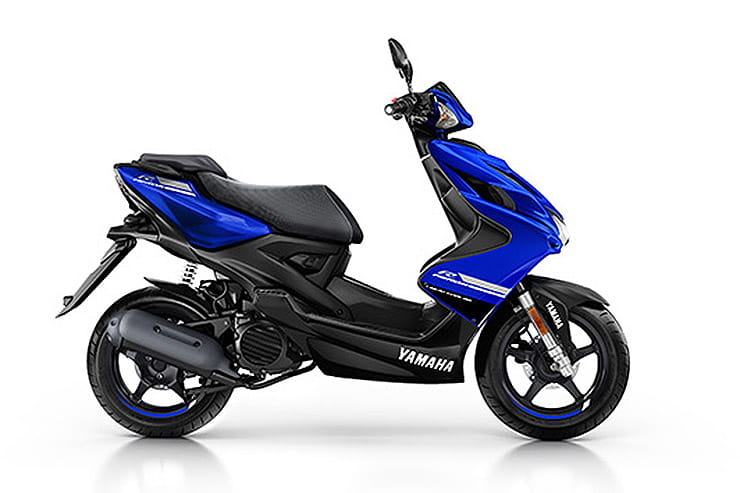 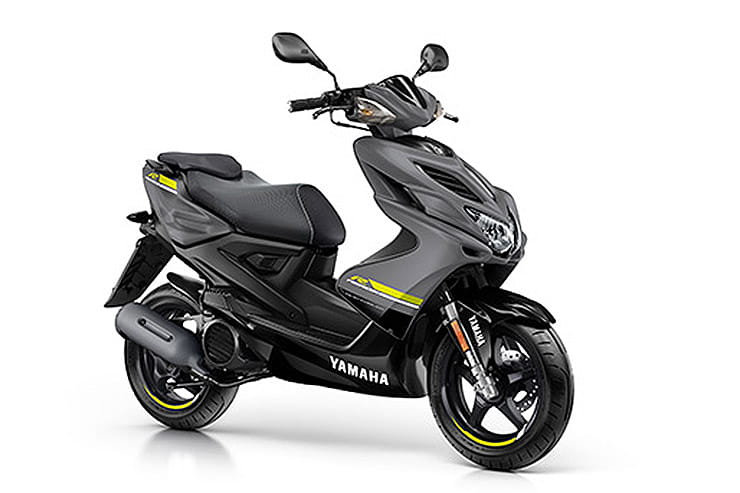 Was a time when nearly all the Japanese ‘Big Four’ manufacturers, Honda, Yamaha, Suzuki and Kawasaki, offered 50cc scooters on which the nation’s 16-year-olds could buzz around terrified grannies like wasps around a honey pot – but no more. Although Kawasaki never offered a 50 (although it did, briefly, a 125 and 300, built by Kymco), Suzuki no longer has anything other than Burgman maxi-scoots and Honda’s UK range is comprised only of 110cc or above machines. Yamaha, however, have always been different and still has two offerings: the Neo’s 4 is its ‘smart city commuter’ from £2674 but more exciting is the Aerox 4 sports scooter, complete with a modern 50cc, four-stroke engine, LCD instruments, stylish up to date looks and much more. It’s not the cheapest, certainly, but it’s the only solid Japanese offering, is bang up to date, packed with modern features and wants for nothing. Besides, no less than Valentino Rossi rides one (in the MotoGP paddock) and you can even get one in team replica  ‘Race Blue’ colours! 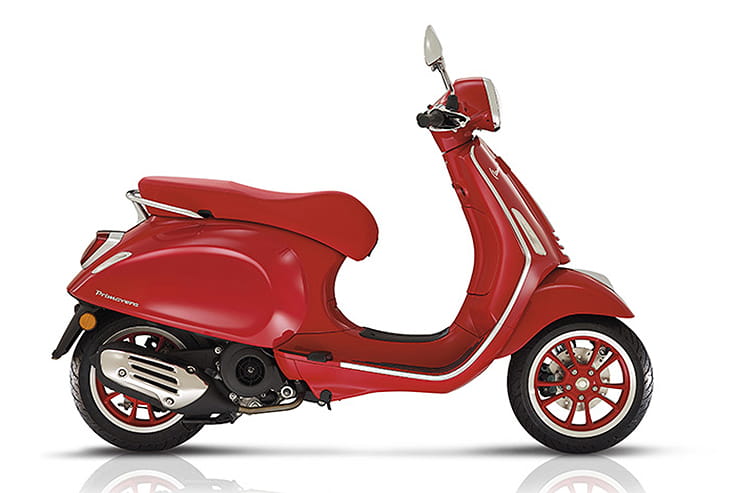 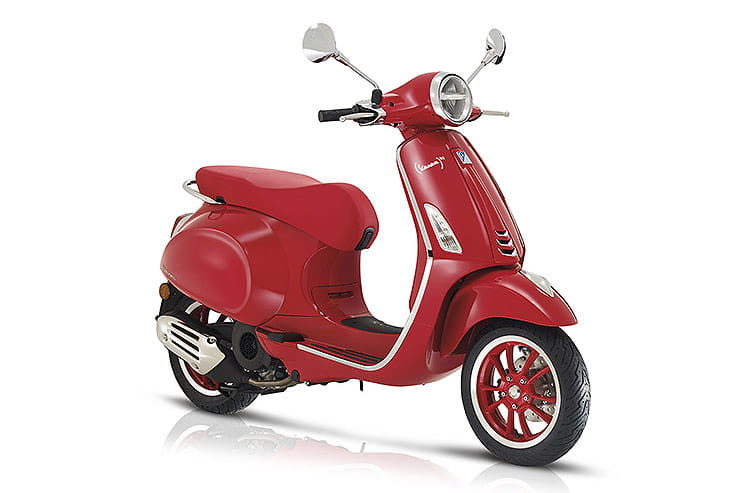 We’ve saved arguably the most stylish, but definitely the most pricey and luxurious, until last. Italian legend Vespa, which is also owned by Piaggio, although, in fairness, always has been, way back to 1946, is arguably THE icon when it comes to scooters, with its novel and distinctively-styled machines proving a huge success and the foundation for an empire right through the 1950s and ‘60s. More recently, along with Lambretta, they became the definitive scooter choice for ‘Mods’. While, since the early Noughties, their classic style has been blended with fully modernized mechanicals and classy luxury touches to create modern, but retro-styled scooters, in a variety of capacities that are hugely fashionable round town transportation. The Primavera is its smaller model (the larger is the GTS), is available in 50 and 125cc forms and is simply a work of art. There are modern four-stroke engines, smart clocks, a plush seat, decent luggage and lots of colour options and neat design touches.  It’s not cheap, sporty nor, arguably, as practical as some (it’s luggage space is adequate rather than generous). But it is gorgeous to look at, has the best name in the business, is beautifully built and finished and, for style-conscious types around town, the only 50cc scooter to have.