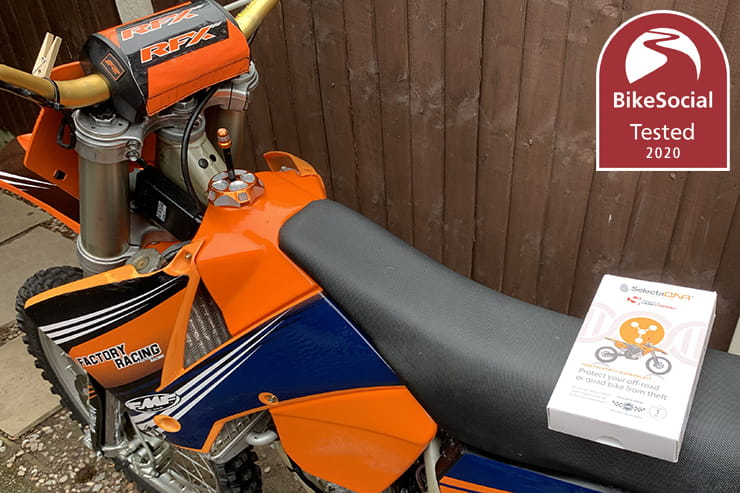 Off-road motorbikes can get into the news for all the wrong reasons. Bikes that are great fun when used correctly on private trails and tracks were described as “cause for great public concern” at a trial in Liverpool Crown Court in 2017; two males who had been pursued across Liverpool on a Kawasaki KX250 that wasn’t road legal.

Is it worth security tagging an off-road motorcycle?

While serving as a sergeant at Merseyside police, I was responsible for the tactics on the day when those two males were spotted, followed and finally arrested. During the chase, we sprayed the offenders with SelectaDNA tagging spray, which meant that even though they abandoned the bike on waste-ground, then crawled through a drainage tunnel under a motorway, the spray remained on them and we secured the world’s first conviction for SelectaDNA tagging spray. We proved those two males were on the bike when they were sprayed, and they both received two-year community orders, among other things.

But that bike was never returned to an owner; we simply didn’t know who owned it.

Although you can register your off-road bike with the DVLA, the numbers of unregistered machines in police compounds, unable to be returned because the police simply can’t trace them, show that many owners don’t. And if they did, and the frame / engine numbers had been removed, the bikes may still not find their way home. 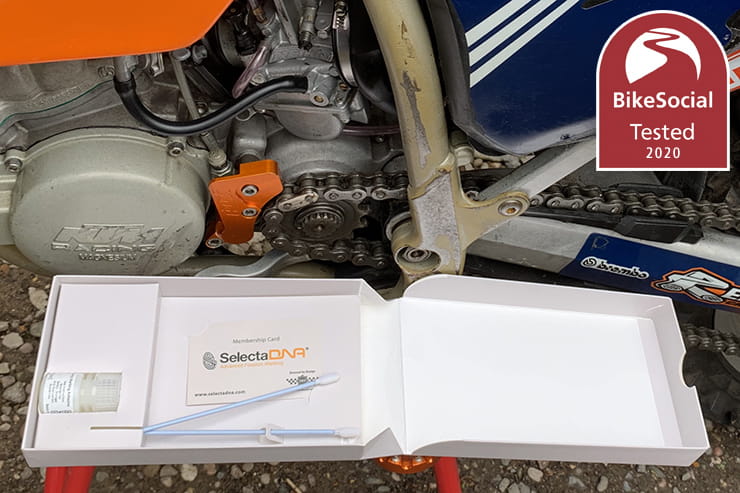 From the manufacturers of the forensic marking spray I used while in the police – which is now used by forces across the UK – there’s a version of SelectaDNA that owners can apply to their own bikes, which is what I’m reviewing here.

The kit comes with an 8ml bottle of SelectaDNA fluid, which includes microdots that contain the information that enables vehicle examiners to trace you, should your bike be stolen. You also get two application sticks, four uniquely-coded tamper-proof labels that are resistant to abrasion, chemicals and weather, along with two high-visibility warning labels to tell thieves that your bike is forensically marked, and to give an indication to police vehicle examiners that the machine can be identified.

The DNA fluid has a UVA tracer in it, so it shows up under UV light – all stolen vehicle examiners will (or should) run a UV light across the common areas for security marking on bikes that have been recovered.

I found it was really easy to apply the fluid using the application sticks, and there was plenty in the bottle; enough to apply it liberally into a lot of nooks and crannies around the frame, forks and under the seat. 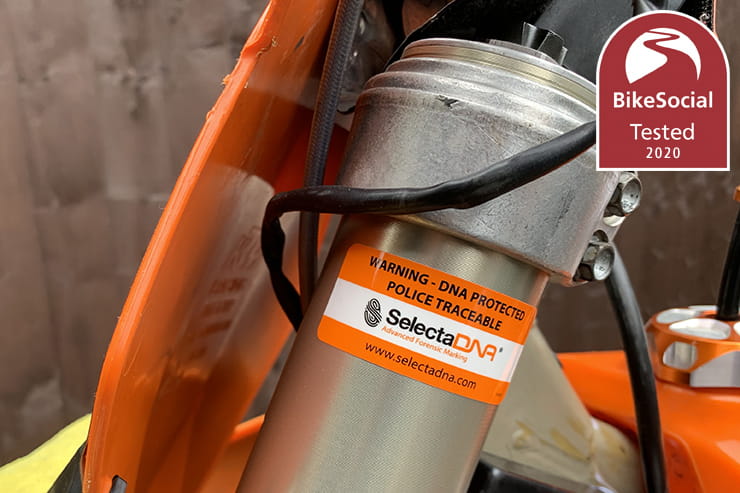 What kind of bikes can SelectaDNA be applied to?

I applied it to a 2004 KTM 125 SX – this kit is specifically aimed at off-road bikes and quads, although the SelectaDNA Motorbike, scooter and Moped kit is also available for £69.50 and also includes six unique ID stencils that are used with the supplied UV etch-marking compound. 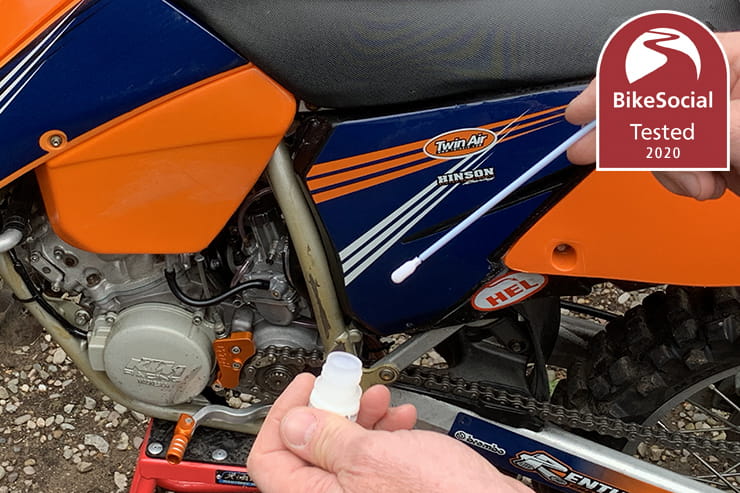 How long will SelectaDNA stay on my bike?

SelectaDNA has passed the requirements to achieve a rating of PAS820:2012 Grade A, which means that it’s been lab-tested and artificially-weathered to show that it should last outside for at least five years under normal conditions. Of course, when it’s applied in the nooks and crannies of the bike, they should be well out of the weather, so I’d expect it to last a lot longer. 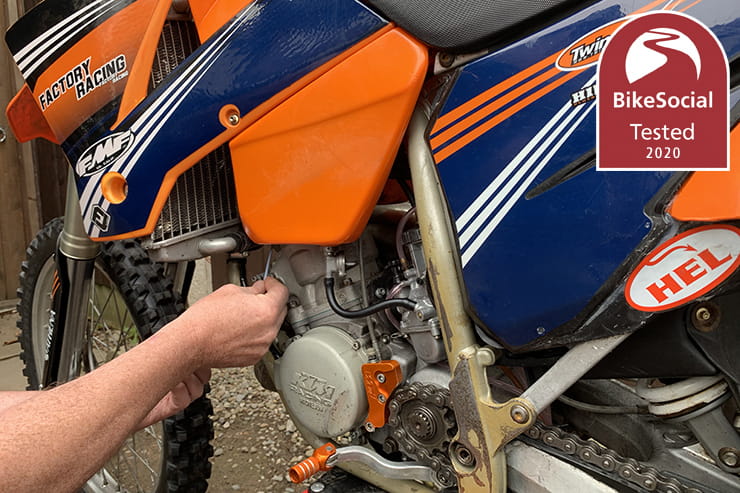 How will the police find me if my bike’s stolen then recovered?

Included in the kit are the registration details for Selectamark’s Secure Asset Registration scheme, which was simple to complete by following the directions on the card and online.

Once the police find your property, they can access the database and contact you with the details you’ve provided. 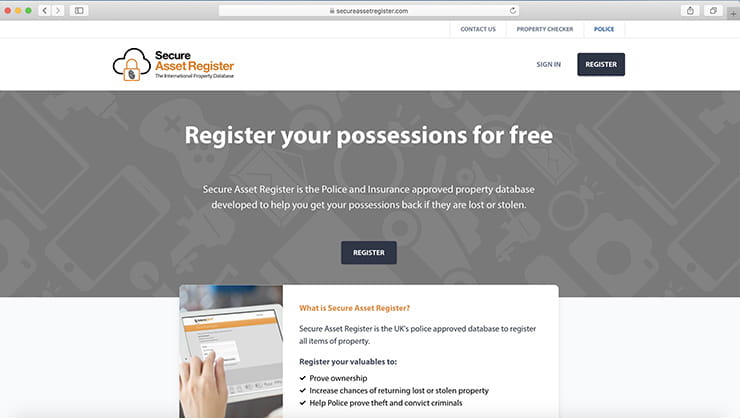 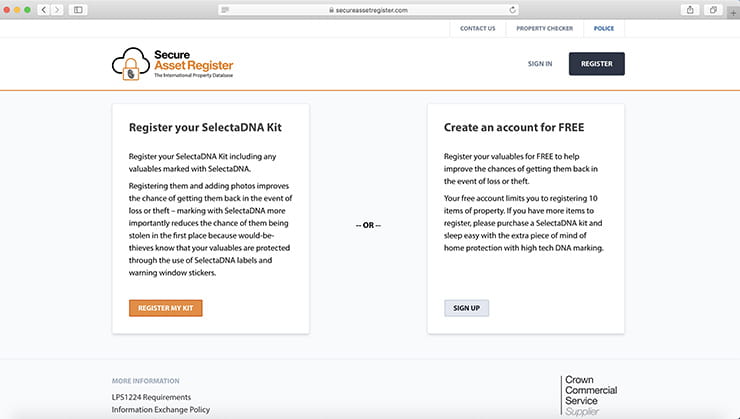 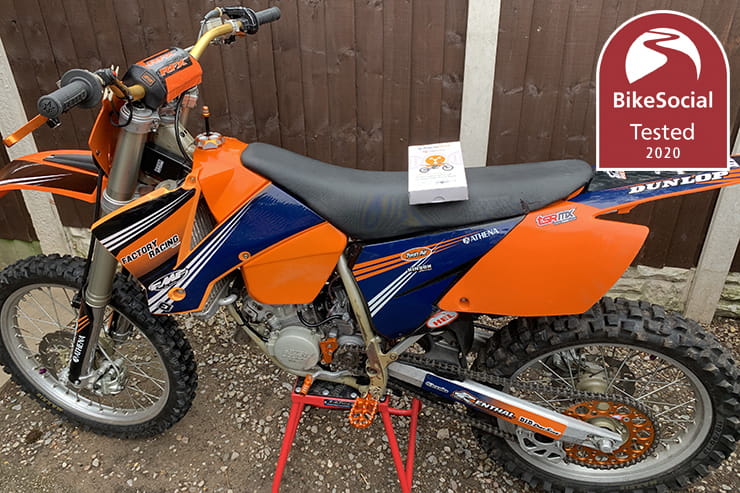 Are my personal details and information safe?

Selectamark holds IS09001:2015 and ISO27001:2013 accreditation for its quality management and Information Security Management, and were the first company in the world to be accredited to Loss Prevention Standard 1224:Issue 3. Selectamark is also accredited by Secured by Design to work with the police, so yes, they should be.

SelectaDNA’s marking kit is another layer of security for your bike if you’re unlucky enough that the physical security – chains, disc locks and the like – have been overcome. If your motorcycle gets stolen it should, in theory, get returned to you if it’s recovered by the police.

I’ve dealt with people who have lost bikes through burglary, and even though their machines were of relatively low monetary value, they often had a lot of memories attached to them; I’ve seen people break down in tears of relief at getting their property back. 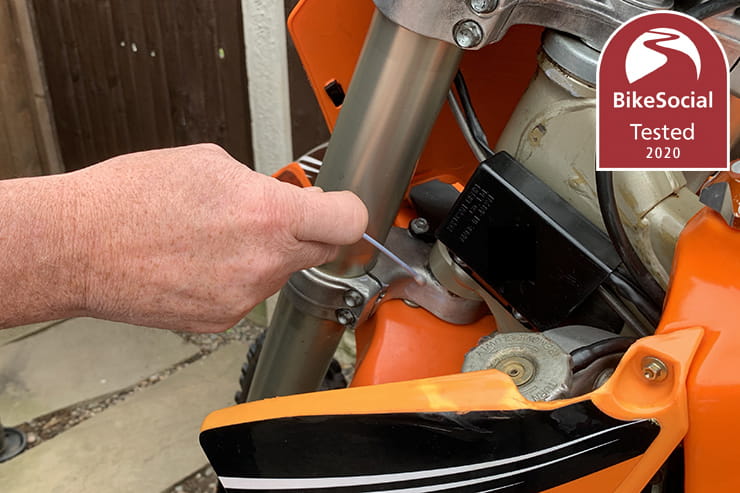