Inside the Goodwood Festival of Speed 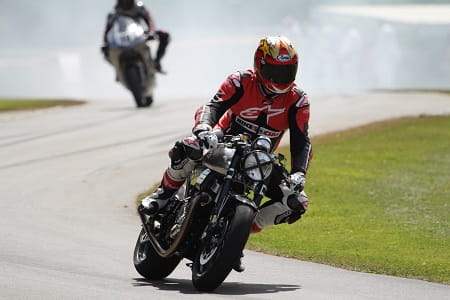 To my right is Freddie Spencer sat on the actual NSR500 that he won the world championship on in 1985. In front is Jim Moodie the now retired former TT legend riding Rossi’s 2012 Ducati MotoGP bike, and behind me sits 1987 GP500 World Champion 500GP legend Wayne Gardner.

This is motorcycling royalty all on one grid. For some reason we’re with them. 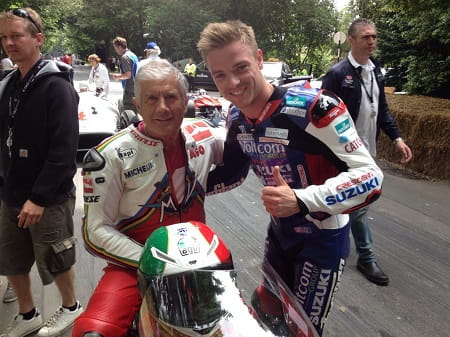 Take a look around and there’s the most winning rider in GP history - Giacomo Agostini on an MV Agusta. Sat on a hay bale waiting for his ride is Pata Honda WSB rider Leon Haslam chatting to current BSB Champion and WSB rider Alex Lowes.

TT legend, and 21-times TT winner John McGuinness is one of the main motorcycling attractions on his 2014 TT Honda Fireblade and before we go up the hill tells me: “Even after ten years riding up here I never know where it goes!”

There’s Norton’s TT bike from this year, a Kenny Roberts TZ750, the new Hesketh road bike and a host of other famous bikes from racing history up to now from Kevin Schwantz's RGV500’s to an electric Brammo. 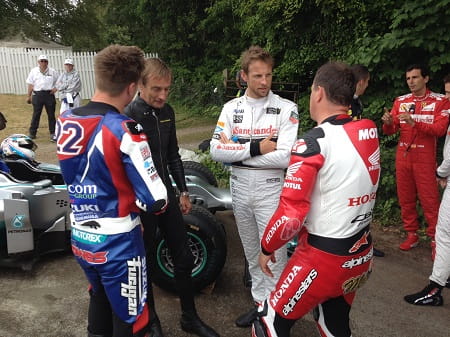 Oh, and F1 star Jenson Button has just been chatting to John McGuinness about riding his Ducati 1199 Tricolore around, as other established stars like TT-winner James Hillier discuss their wheelie strategy for the crowd.

Tomorrow, MotoGP’s Bradley Smith and Bennetts-ambassador Scott Redding will take to the hill for the crowds.

Nowhere else in the world would you get these kind of people sat next to each other on a start line, but this is no ordinary place, this is the Goodwood Festival of Speed.

It’s one of the biggest motorsport events in the UK, attracting some 150,000+ people over the four days as drivers and riders parade up the hill that runs past the Earl of March’s country estate.  The cars race against the clock, the bikes are here for demo rides. We’re taking part in it, and can’t quite believe our luck. 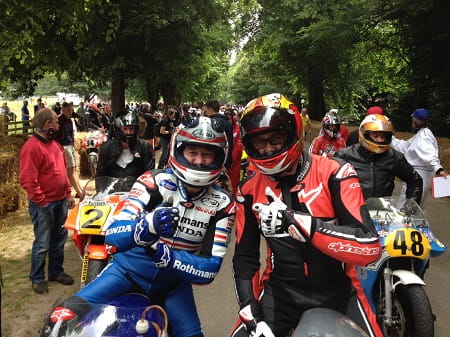 On the grid sits me and Norton’s £23,000 Domiracer, the modern recreation of the iconic Domiracer name. It’s one of just fifty built, this one is number one, owned by Norton’s CEO Stuart Garner and we’re under strict instructions to put on a show.

In fact, Garner said I could only ride it if I could: “Do massive burnouts and wheelies and entertain the crowd, if you crash it or it goes wrong don’t worry about it.” And yes, I had so sense check what he was really saying too. It’s his bike, so who am I to argue? I take his point that there’s no point in riding up the hill waving at the crowd, they want to see, hear, smell and feel the bikes ride past.

Hearing it is one thing that’s never in doubt with the Domiracer. The 961cc in-line twin cylinder is on open megaphone pipes for the occasion, the only thing drowning this out would be a Formula One car at full chat.

The start line is a frenzy as mechanics run to bump start VIP guests Freddie Spencer and Wayne Gardner on their NSR500s, vans arrive full of blokes in team shirts with starter motors for Rossi’s bike, and the other collected MotoGP bikes in attendance.

It’s a noise like nothing you have ever heard before. Some 50 bikes all warming up at once.

Young WSB contender Alex Lowes rams into the back of me, there’s burn-outs being done by Steve Parrish on the new Ariel motorcycle. For these boys this is play time, and there’s no pressure on them like a normal race weekend. And then we’re off. One-by-one, wheeled to the line tapped on the shoulder by a start marshall when it’s our chance to face the hill. Camera's on, first gear engaged. Let's go. 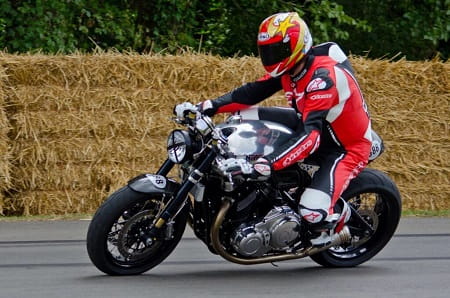 The Norton revs rise, I lock down my visor and head off, flicking the clutch into a small wheelie. The first corner is a double apex, and we’re on cold tyre, so easy does it. Wind on the gas, and then meet at the pre-agreed spot outside the house with Morgy, Norton’s Production Manager and successful club racer on Cameron Donald’s 2014 TT bike.

With cameras clicking, we perform Team Norton synchronised burn-outs for the crowd before pulling off in a cloud of smoke and glory before taking on the rest of the hill, past the straw bales, through the blind right-hander, up past the flint wall, watching not to rub your shoulders on it, and then past the finish line.

Charley Boorman arrives and says he’s been officially warned for riding the Long Way Round BMW R1150GS up the hill sideways on the grass. It’s not going to stop him though.

As some of the world’s most expensive race bikes get leant against posts at the top of the hill, the F1 boys arrive in a cacophony of revs and smoke for the assembled fans at the top.

It’s the only place in the world you’ll see F1 stars asking about TT bikes as they sip a glass or orange juice in the private driver’s lounge at the top of the hill before heading back down, past the Earl of March’s house, and doing it all again over the four day event.

Only at The Goodwood Festival of Speed. 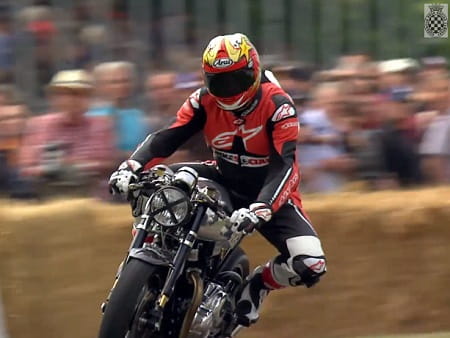 Some of our highlights from the weekend:

- McGuinness and Jenson Button chatting about F1, bikes, and the TT

- Gardner and Spencer telling Leon Haslam they remember when his dad used to push him round the paddock in a push-chair.

- Redding and Smith arriving for the Saturday party after a private jet whisked them away from the Assen MotoGP to Goodwood.

- Wayner Gardner telling us he loved riding the Rossi Ducati MotoGP bike, but still prefers the powerband of the old two-stroke NSR500s.

- Seeing Sean Emmett back in the UK and loving riding the Schwantz RGV500.

- Burnouts and wheelies on the Norton Domiracer alongside Norton's Morgy on the SG3 TT bike.

- Boorman sideways on the grass on his Long Way Round BMW R1150GS.

- Alex Lowes, Haslam, Hillier and Rae on the back wheel for as much of the hill as possible.

- F1 mechanics queuing up to take pictures with John McGuinness and his TT Honda Fireblade.

- TT-winner James Hillier's race face on as he tried to break the Goodwood hill climb lap record, on a Playstation 3...

- BMW stunt rider Mattie Griffin recieving the award for most entertaining motorcyclist from the organisers. 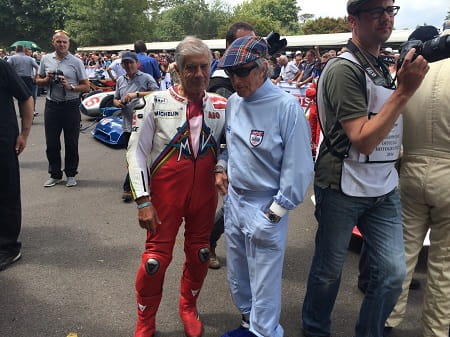 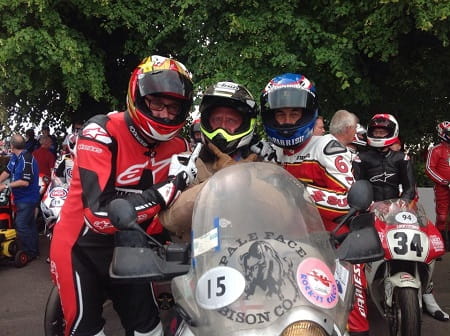 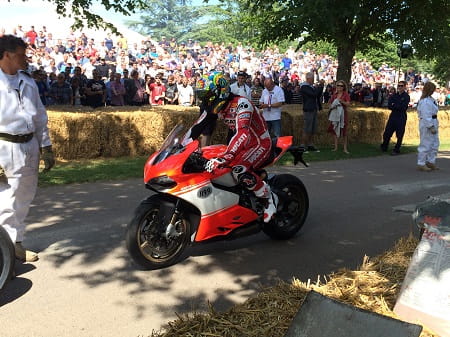 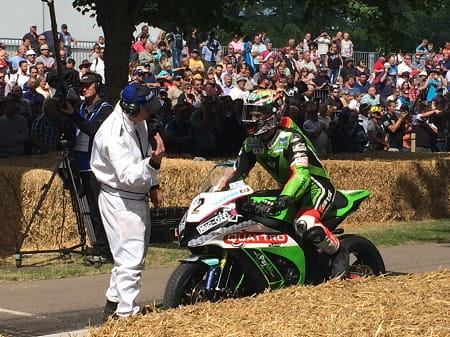 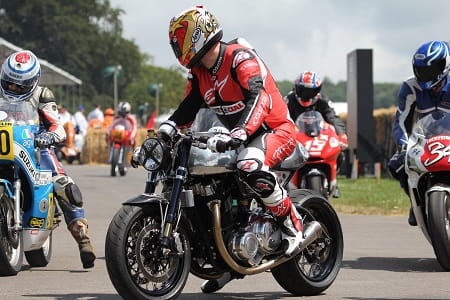 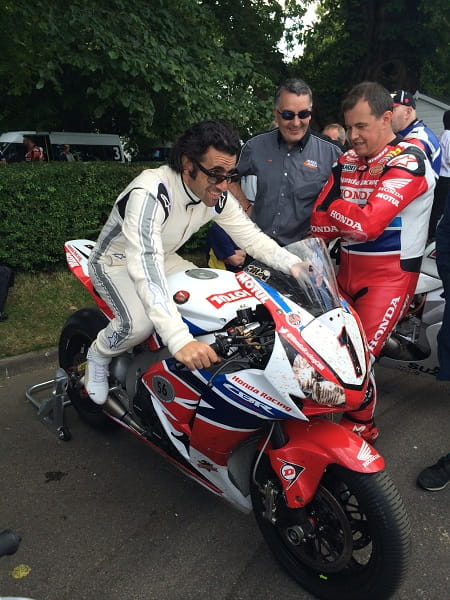 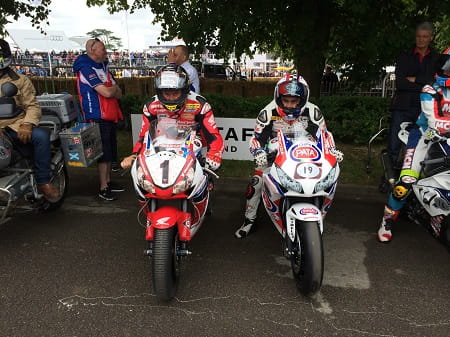 Special thanks to Norton’s Stuart Garner for trusting us with his bike, the boys who looked after me and the Domi, and Morgy for not hitting me on track! Neil Tomlinson, Paddock Chatter & Matt Dunn for pictures, and the assembled  British TT, WSB, MotoGP and celebrity riders for being so down-to-earth, and a good laugh.