Despite poor forecasts, the sun was shining come eleven this morning as John McGuinness took his position on the start line. James Hillier took the early lead on the first lap but it didn’t take Dunlop long to find his rhythm, taking the lead by the end of the first lap ahead of Martin and Cummins. From a standing start on the first lap, Dunlop shattered the existing superbike lap record with an 131.730mph average speed.

Dunlop did nothing but extend his lead on the second lap, stretching the gap to Guy Martin up to seventeen seconds by the time they hit bungalow. As the BMW man pulled into the pits after his first flying lap, he once again shattered the lap record with a 131.890. 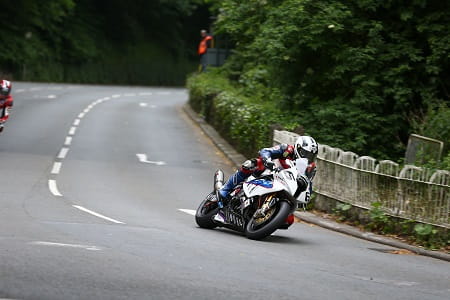 As the riders came in for their first pit stops, Dunlop had a lead of 24.9 seconds over Martin. Smooth stops saw all riders out onto their third lap without a problem. It was disappointment for Cameron Donald and Norton with the Aussie retiring on lap three, Milwaukee Yamaha’s Ian Hutchinson also retired from the race not long after.

After the second set of pitstops, Dunlop led by twenty seconds but the gap between Martin and Cummins for second place was closing up. All eyes were on Dunlop for the final lap to see whether he’d break the 132mph barrier but getting caught up with backmarkers and suffering a few issues with the bike saw that attempt nulled. He crossed the line with a final lap of 129pm 20.570 seconds ahead of Guy Martin who in turn stretched his lead on Conor Cummins towards the end of the lap.