Michael Dunlop has once again taken victory at the Isle of Man TT, this time in the Royal London 360 Superstock race. On a mission, Dunlop led pretty much start to finish crossing the line ahead of Yorkshire’s Dean Harrison and Bruce Anstey.

However, Dunlop's victory was marred by tragedy when it was announced that fellow competitor, Karl Harris had lost his life following an incident on the second lap of the race.

Dunlop made a strong start taking the early lead ahead of Gary Johnson and Dean Harrison but it was race over for Johnson shortly after at the Ramsey Hairpin on the first lap, the Lincolnshire rider fell but was reported to be 'conscious with fractures'.

Dean Harrison secured second into Cronk Ny Mona on the first lap ahead of Bruce Anstey, but Dunlop's lead was ten seconds at the end of the first circulation of the 37.73 mile mountain course. Harrison took some time out of Dunlop at the second lap, but the BMW rider had taken the lead on the road by the time the riders rolled into the pits for their stop on the second lap. 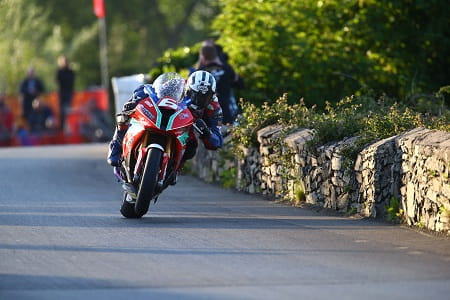 Leaving the pits in a hurry, Dunlop's lead was down to 9.295 at Glen Helen but the Ulsterman had increased this to 13.3 by Ramsey Hairpin. Guy Martin retired from the race at Parliament Sq on Lap 3, with his team mate William Dunlop heading up the pit return lane at the end of the third lap to mark a tough day for Tyco Suzuki.

Into the final lap, Dunlop led the race on his S 1000 RR by 19 seconds. Harrison was able to take a few seconds out of the Ballymoney man but it wasn't enough to make any real dent into the race lead. Dunlop eventually crossed the line to take his second win of the week by 20.109 seconds over Yorkshireman Harrison. Anstey was third ahead of David Johnson with Conor Cummins rounding out the top five. Lee Johnston was sixth on the Pirtek Honda ahead of Michael Rutter, who ran out of fuel at the end of the race, and Dan Kneen. Newcomer, Peter Hickman crossed the line ninth after catching up John McGuinness over the mountain on the last lap.