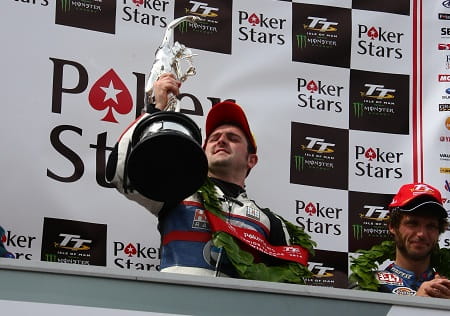 Michael Dunlop stormed to his eleventh TT victory in this afternoon’s PokerStars Senior TT ahead of Conor Cummins and Guy Martin, completing a run of four victories this week.

It was the other Dunlop brother who got the best start, charging to Glen Helen to lead by over a second at the first checkpoint ahead of a close knit pack including Michael Dunlop, Guy Martin and Conor Cummins. The leading four were separated by just 0.05 half way round the lap, but Michael Dunlop established his lead into lap two over his brother by three seconds.

Coming into the pits 7.3 seconds ahead of William, it was a slightly slower pitstop for the younger Dunlop brother. A rapid effort by the Honda racing squad saw Cummins charge up the pack into second ahead of Guy Martin third. 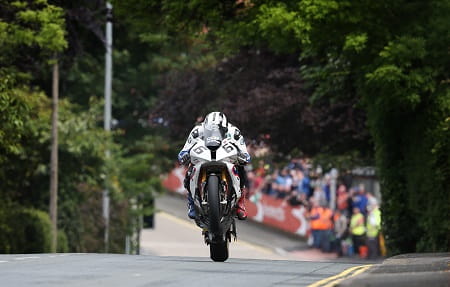 It was bad news for William Dunlop when he crashed out at Grahams on lap four – it was immediately reported that the Ballymomey man was conscious but was suspected to have a broken leg. At Glen Helen Dunlop led Cummins by 12.622 with Guy Martin still third five seconds further back.

A mid-race charge from Cummins saw him eat into Dunlop’s lead, cutting it down to as low as six seconds at one point on lap five but responding, Dunlop pulled the extra seconds he needed to take his fourth victory of the week, 14 seconds ahead of the Manxman. John McGuinness had a steady ride to sixth place on the second Honda fireblade while a cracking last lap performance from Peter Hickman saw him smash Josh Brookes’ newcomer record from last year with an average speed of 129.1mph.