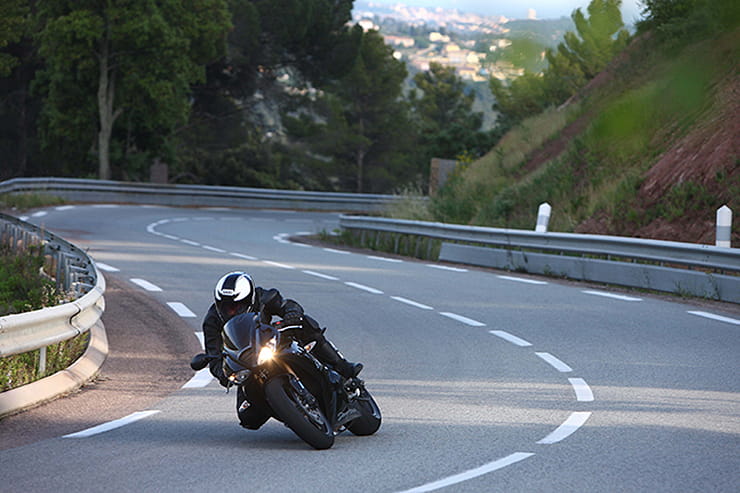 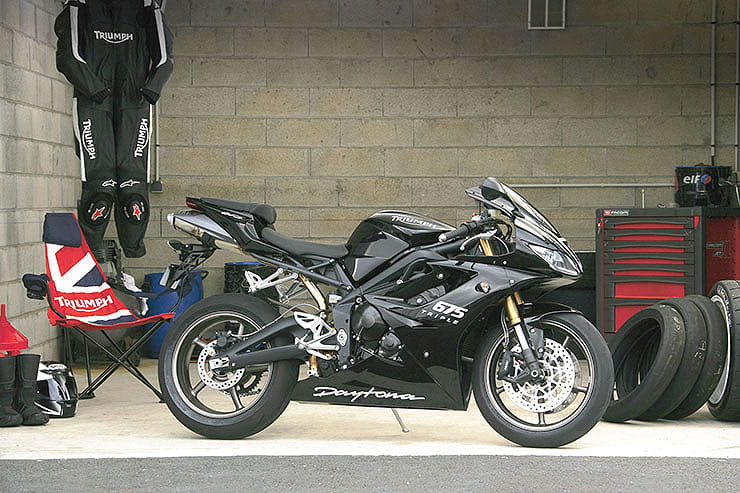 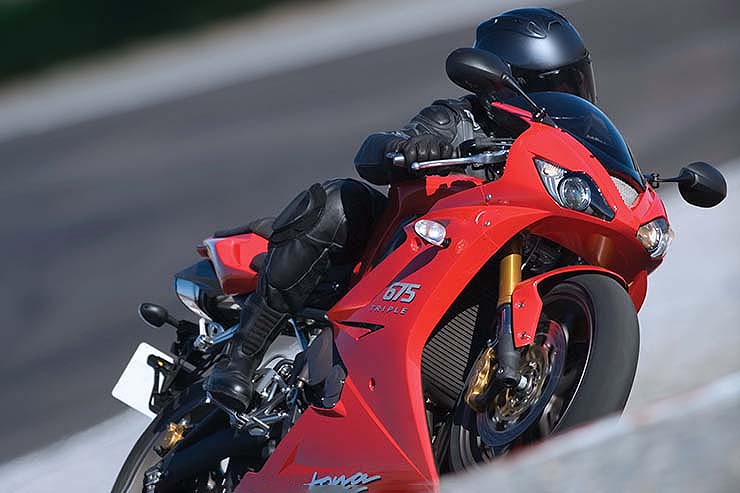 When the Daytona 675 arrived in 2006 it managed what few thought ‘little’ Triumph could ever achieve - comprehensively outgunning the ‘big four’ Japanese inline four supersport bikes. And it was mainly down to one factor – the inline triple engine.

Prior to the 675, Triumph had attempted to copy the Japanese with the TT600 and Daytona 600 and 650. Hindsight is a wonderful thing but looking back it is obvious that without the Japanese factory’s huge R&D budgets, Triumph were onto a hiding to nothing. What they needed to do was think outside the box and that’s where the Daytona 675 came into its own and why it was such an international success.

By blending a full-on sports chassis with a gloriously gutsy triple motor, Triumph created a  supersport bike that wasn’t a rev-happy beast, making it far better for road riding. Leagues ahead of the competition when it came to ease of use, what the Triumph lacked in outright top end power to the inline fours, it more than made up for in drive out of bends. And this trait remains true to this day. If you are after a supersport bike that doesn’t constantly demand its rev counter’s needle to be buried in the red, the Triumph Daytona 675 is for you.

While the new supersport market is all but dead, the used one is thriving and that means that prices remain quite high, especially for popular bikes like the Daytona. An early Daytona will set you back roughly £3200 in a private sale with dealer prices starting at £3800. A lot depends on mileage and condition with over 20,000 miles showing considered a ‘high’ mile bike. If you want the updated 2009 model (the vented air scoop is the most obvious difference) you need to have between £4500 and £5000 tucked away to buy a bike from a dealer with private sellers asking for just over £4000. The SE shouldn’t cost a premium as it isn’t very trick (it only gained a flash paint scheme) however the R model, which came out in 2011, is very trick thanks to its Öhlins suspension, Brembo brakes and carbon details. Prices for the R start at around the £6500 mark.

The Triumph’s trump card has always been its triple motor and back-to-back with an inline four of a similar vintage the Japanese bike feels breathless, lacking in mid-range and frustrating to ride. Open the throttle and the 675’s extra capacity as well as its triple format means that there’s bags of mid-range poke that then develops into a searing top-end that while not quite as powerful or fast revving as an inline four still delivers quite a kick in the pants. And it does so with a wonderful rasping exhaust note. The updated 2009 model gained 3bhp of peak power and a slightly boosted mid-range but in all honestly you won’t spot this on the road and an aftermarket can and an ECU re-map/fuelling module will deliver the same performance benefits to the older model.

The Daytona engine was a ground-up new motor for Triumph and as well as being very modern in its design it is fairly solid in terms of reliability. Early bikes did have a reputation for burning oil, which you need to keep an eye on if you trackday one, but your main worry is sensors failing, which are annoyingly expensive to replace so look out for any warning codes on the dash. The exhaust valve, like so many, likes to seize so always check this is functioning as it should. Some owners remove the valve or wire it open but there is debate as to if this is a benefit or hinderance to the bike’s mid-range. A de-cat link pipe, which removes the catalytic converter, is a worthy addition as it not only helps the bike breath, it also makes the exhaust run cooler, reducing the annoying heat build-up around your ankle. Aftermarket end cans are common and Triumph released their own ECU update (for their Arrow can) to match the fuelling, so check the bike has received this upgrade or has had an ECU re-map or fuelling module fitted.

Triumph didn’t release a factory ‘plug and play’ quickshifter for the original generation of 675, it came with the 2009 update, so be wary of bikes with a unit fitted as they can damage the usually very slick gearbox. A couple of owners report reg/rec overheating issues with various cures on the internet ranging from replacing the unit to relocating it. 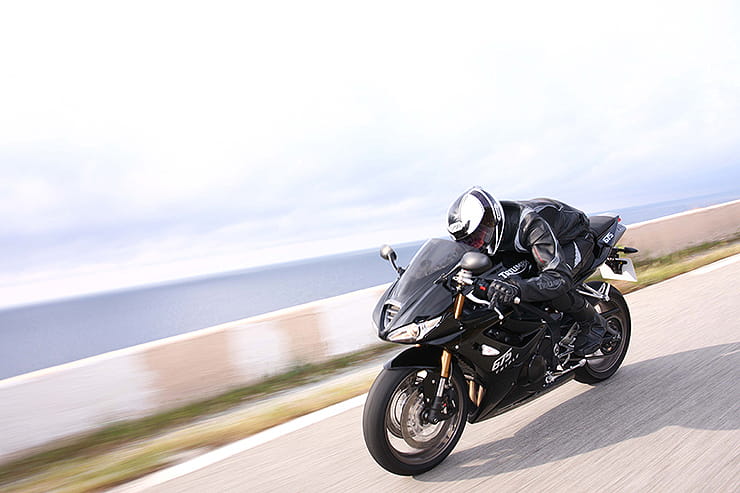 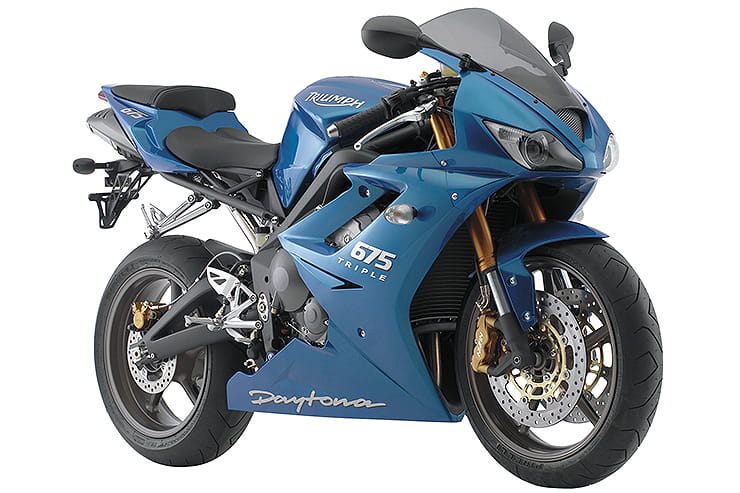 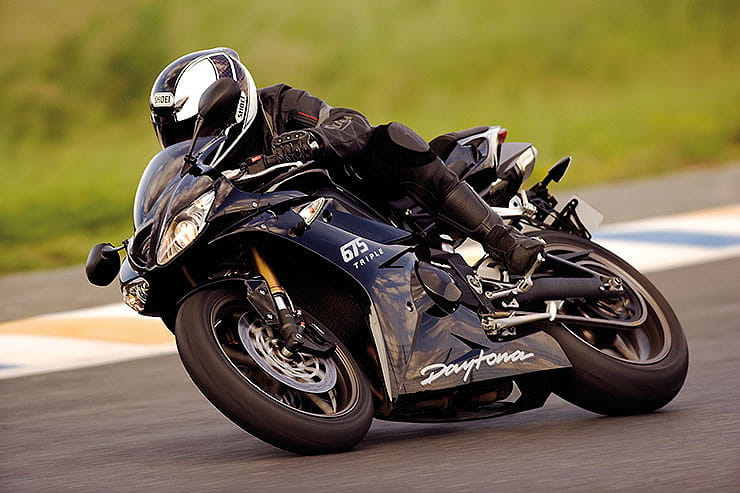 Thanks to its mid-range you don’t have to work a Daytona as much as an inline four so economy figures are better but still not great. Expect to average in the low 30mpg range on a ‘normal’ ride with high 30s possible when taking it easy.

A simply wonderful handling bike, the Daytona 675 is a match for any Japanese inline four and on a fast road or a race track is it sublime. You get fully-adjustable Kayaba suspension on all models and it is fairly high-spec, so adjusting it does actually make a difference. Watch out for the suspension linkages seizing up on all years of bike as they should be stripped and regreased at 12,000 miles but this seldom happens, highlighting how little grease Triumph pack in there at the factory when they inevitably seize solid! Tipping the scales at a claimed 185kg the Daytona is on a par with its rivals in terms of weight but thanks to its narrowness it feels more manageable if you are short in the leg, meaning the 830mm seat height isn’t an issue. If you can locate them, the Öhlins shock from the R slips straight into the Daytona’s chassis but the Öhlins forks are a different diameter, so you will need the R’s yokes as well to slot them in. In all honestly, it’s a waste of time so pay for a fork re-valve by a professional instead.

There is nothing wrong with the 675’s radial Nissin calipers and you get braided lines as standard, which is good. A set of high friction pads will give a bit more bite, which is recommended for track work, but otherwise just ensure they are kept nicely serviced. 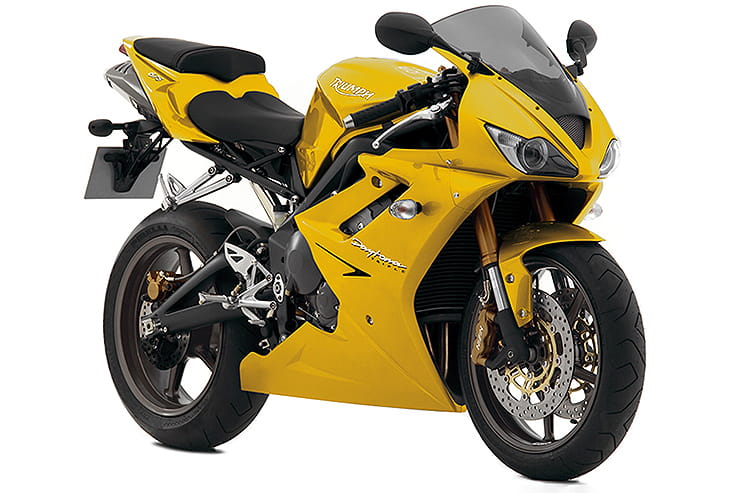 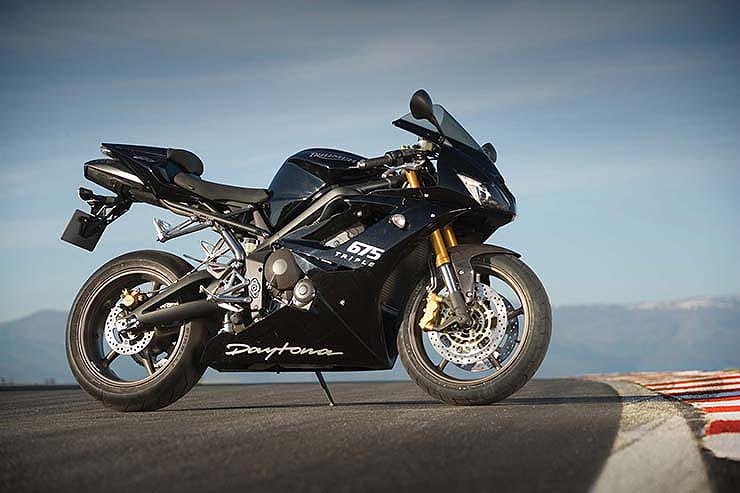 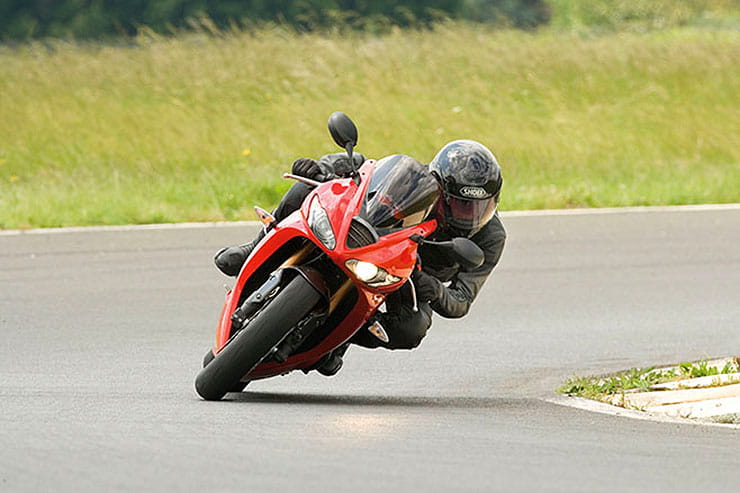 Some owners do take their 675s touring but the fact of the matter is that they are a narrow, cramped supersport bike with low bars and a thinly padded seat. If you want to cover distance, a taller screen and gel seat helps matters but these are short-hop bikes that are there to be enjoyed on a quick bast rather than a long tour.

The only rider aids on this generation of 675 are a gear indicator on the dash and shift lights, however aftermarket traction control systems are available. Triumph sold an array of extras such as carbon infill panels, an Arrow silencer, carbon huggers and mudguards and even two options of tank bag (15-litre and 30-litre). But this is just the tip of the iceberg and due to the 675’s popularity there are loads of accessories out there ranging from fuelling modules to race exhausts, rear sets, levers, the works. It depends on your tastes but if you want all the bling, buy a bike with it fitted as this will save you cash in the long run – just be wary about who fitted the parts and how competently it was done!

If you want a lightweight supersport bike for mainly road use, the Daytona 675 is the one to buy. The triple motor is beautiful and very engaging to use while the chassis is right up there with the best Japan has to offer. Some will always question a Triumph’s reliability and quality of finish over its Japanese equivalent but if you buy a well-cared for example this isn’t an issue. Although it was updated, there isn’t a huge difference in performance so buy the best example you can afford and then just enjoy it.

Three things we love about the 675 Daytona… 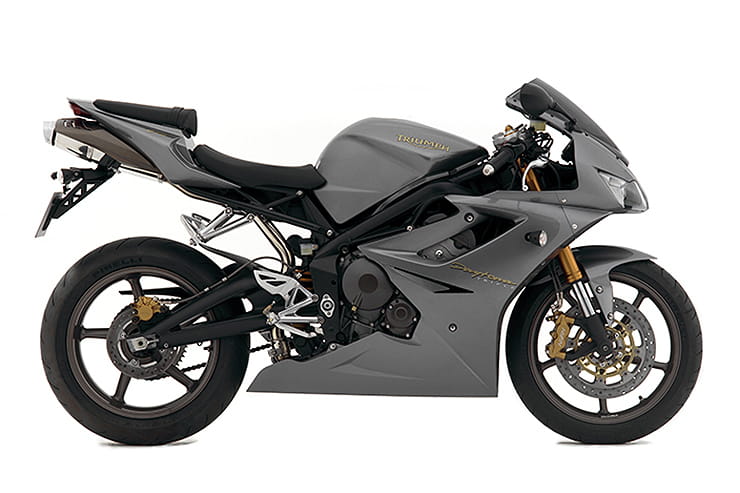 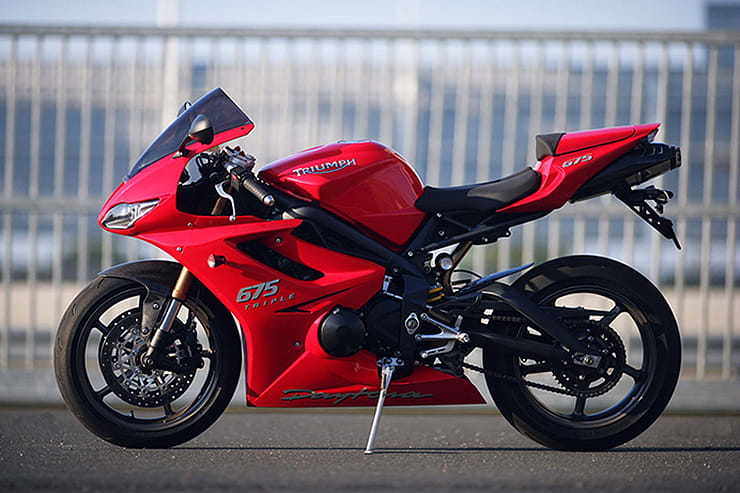 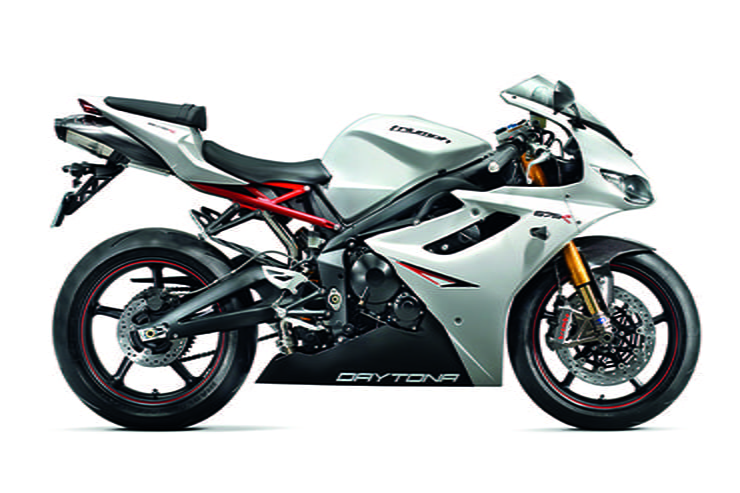