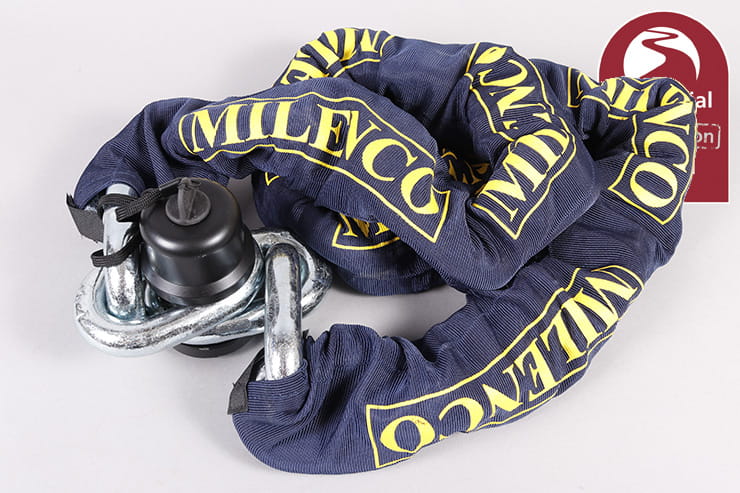 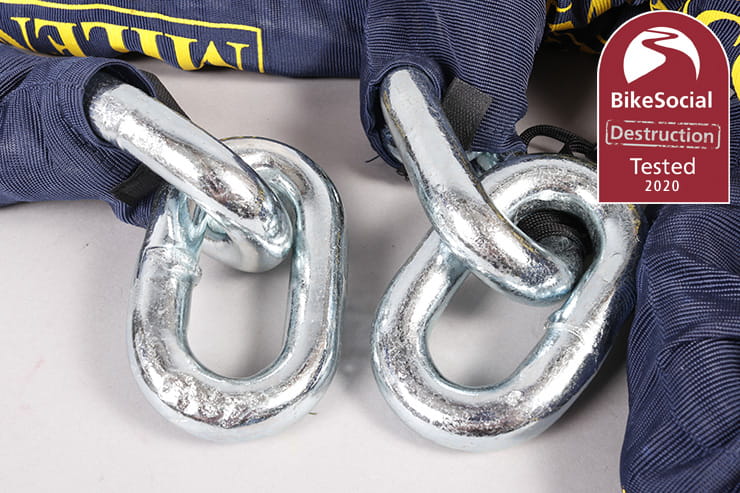 At just under 22kg, the Milenco Snaefell lock and 22mm chain is among the heaviest I’ve tested, but that massive bulk of metal on each link also gives it the very high resistance to attack that these top security products achieve.

While a relatively new name to the bike market, Milenco is a well-established engineering company that’s been producing chains and locks for some respected big brands for a long time.

Tested to the highest standard – Sold Secure Motorcycle Diamond – the Milenco Snaefell chain has a tough fabric sleeve over the chain to protect your bike’s paintwork, which is especially important on a chain of this weight. Other Milenco chains I’ve tested have had rivets at either end of the sleeve to keep it securely in place, though here it’s tethered with strips of Velcro. This is surprising as there’s no need to adjust the length of the chain (the links can’t pass through each-other), though if it does come loose it’d be easy to poke a zip-tie through a hole and keep it secure.

There’s no rubberised protection on the lock body itself, though I can’t see a situation that it’d come close to your bike’s paintwork; at most it’ll show signs of use as it’s dropped on the ground; certainly no cause for concern here.

A rubber plug is supplied with a tether than can be looped around one of the chain’s links, which can be used to protect the keyway from water ingress. Three stainless-steel keys (duplicates of which can be made by Milenco) are supplied and are of high quality, making them unlikely to bend or snap.

While the RRP puts it among the most expensive locks, at the time of writing it appears to be available at significant savings in many stores. 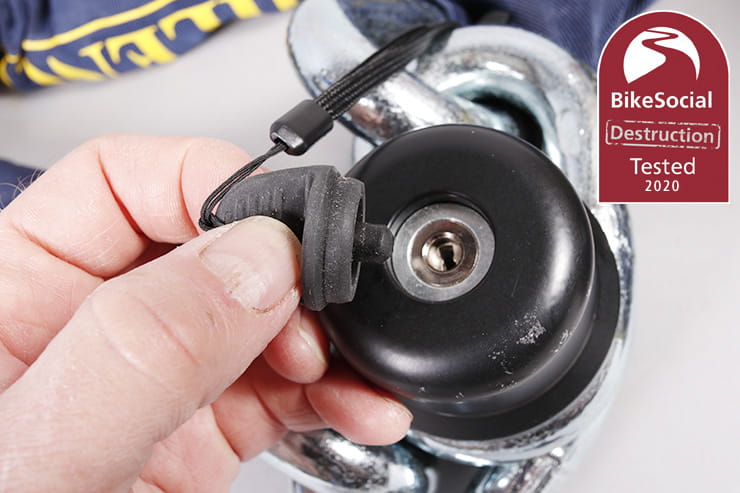 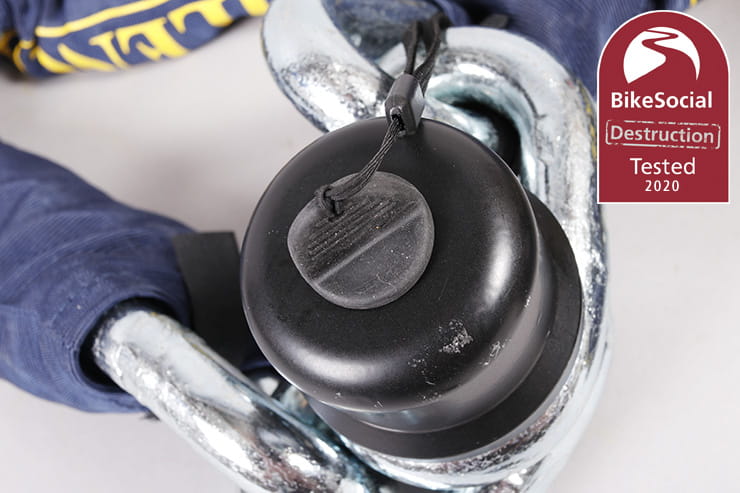 Around 14mm is what I’d consider the limit of portability when out and about on a bike, so it’s no surprise that this huge 22mm chain is meant to be left where you’ll use it. Note though that leaving any lock out in the street is not advisable as thieves could scupper it, leaving you unable to use it when you arrive by – for instance – pouring glue in the keyway. Another trick can be to cut a link when there’s nobody around and the chain’s not in use, then tie it back together with a zip-tie, hiding the join under the sleeve and making it quick and easy to defeat when it’s securing your bike. This is why I’d have liked to see the sleeve rivetted in place so that, if you do leave the lock out in the open, it’s more obvious if it’s been tampered with. 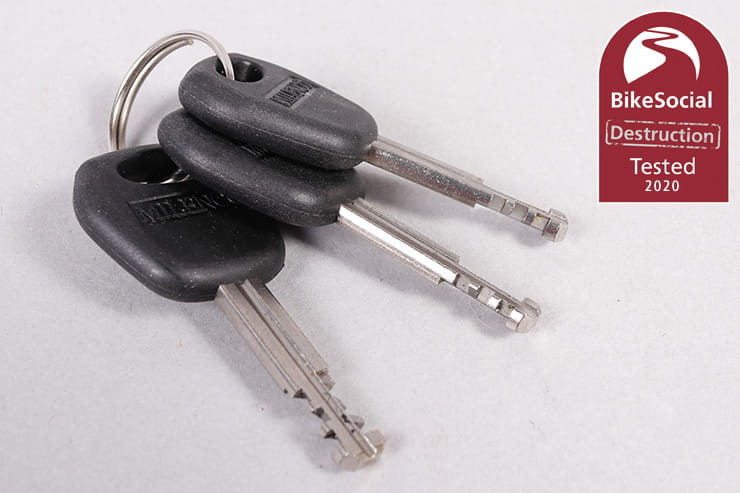 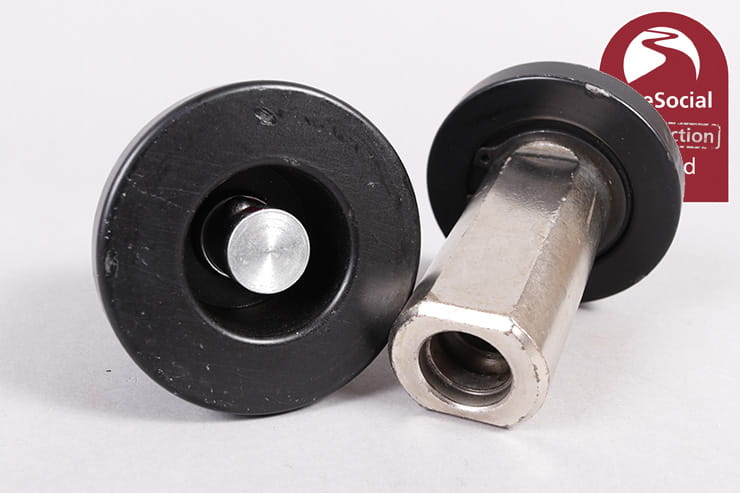 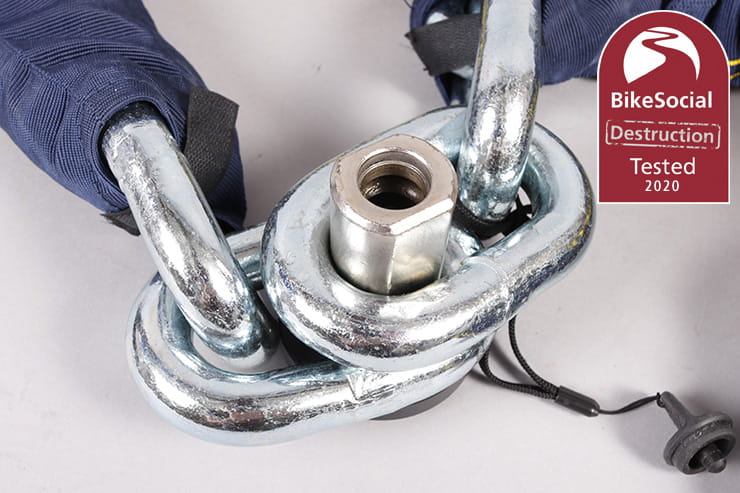 This is an unlikely situation to be in however – most users have these types chains at home to keep their bikes as secure as possible and portability really isn’t an issue.

I’ve tested the 2m version of this chain, which weighs 19.98kg. At 9.99kg/m, it’s heavier than the Oxford Beast and Almax Series V, but lighter than the Pragmasis Protector 22mm and Squire Behemoth.

The Milenco is also available in a 1m length, though it’ll be tricky to get that around the wheel and through a ground-anchor, so check where you’ll be using it before choosing.

Keep in mind that not all ground anchors can take a 22mm chain – check out our reviews of the best ground anchors or be sure of the specs before you buy. 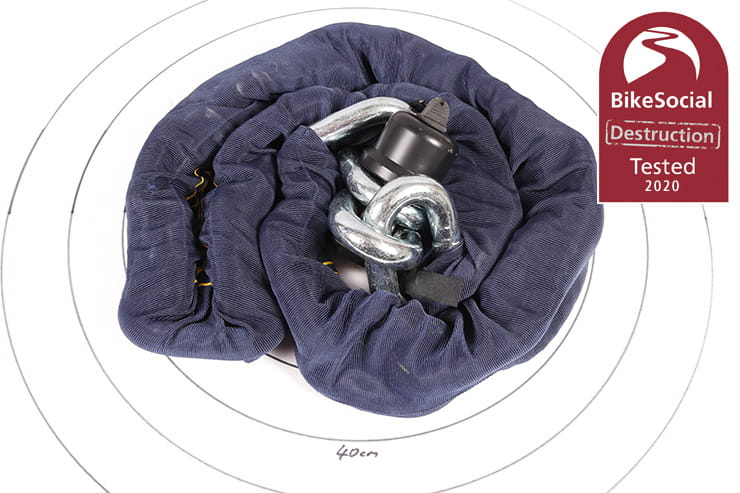 The Milenco’s 22mm links are between 20.0 and 23.2mm thick, so even our huge 42” bolt croppers are utterly useless. Good hardening means that a sledge-hammer attack – while very unlikely – is also ineffective against the Milenco.

Only an angle-grinder will beat this, and like other 22mm chains, it takes a very long time; the attention this would draw to a criminal is extremely significant. 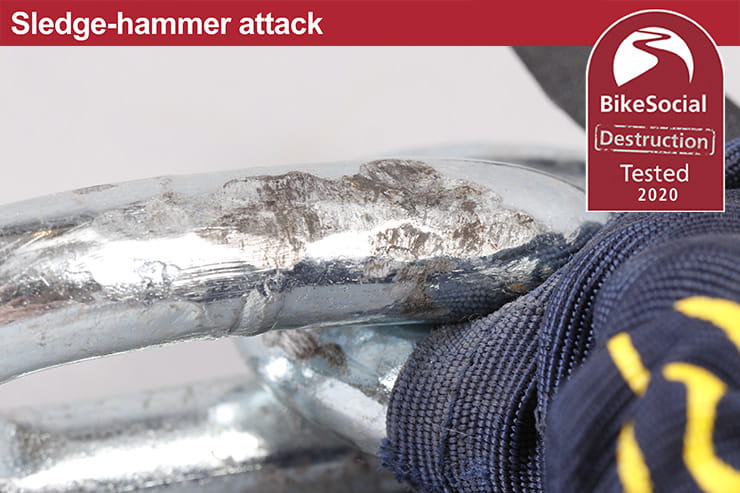 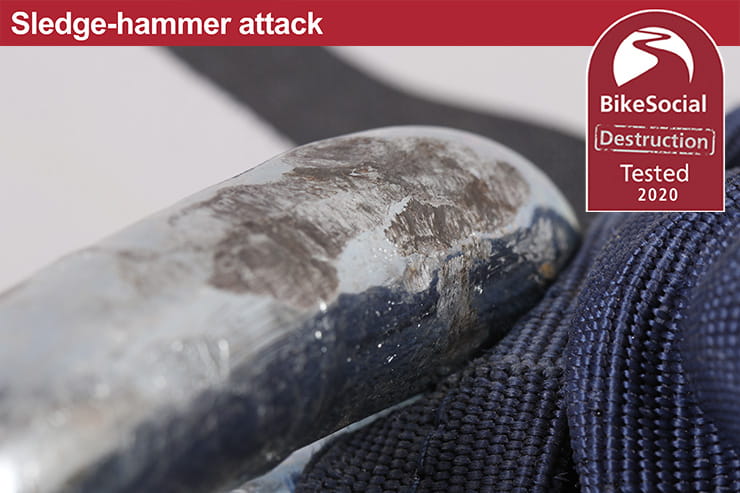 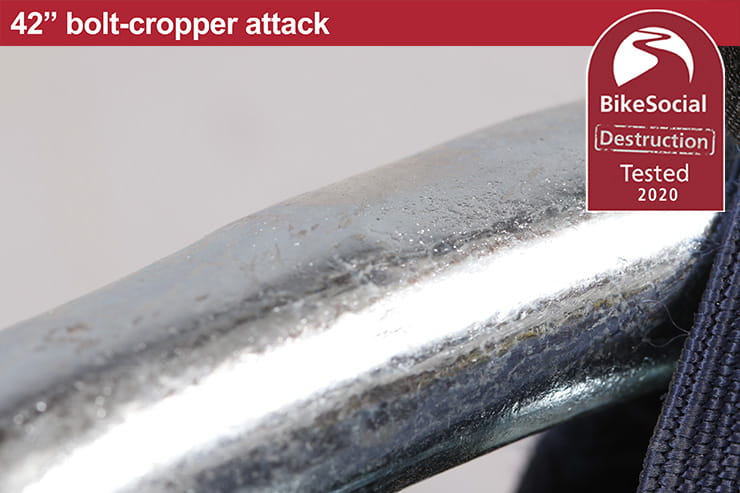 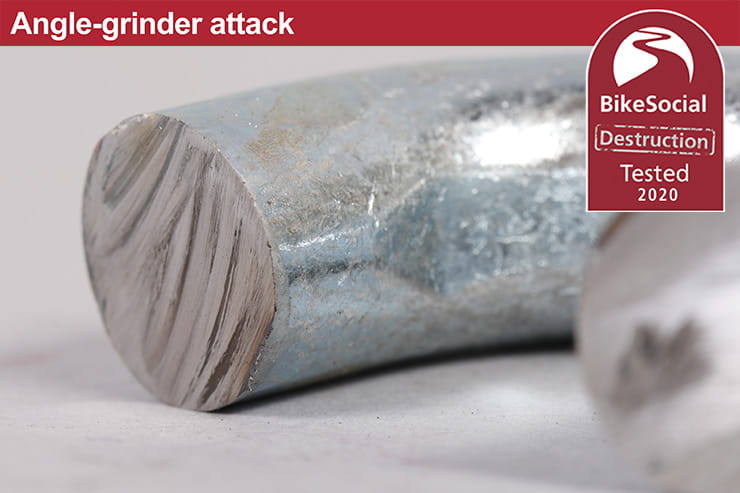 Like the chain, this lock – with its 30mm-thick shackle hidden inside the chain links – is tough. Even after hammering it and attacking it in various ways with the angle-grinder, it still opened and closed easily. Regardless of the tools used, besides picking the lock, attacking the chain will be the only way a thief will get this off.

Picking is possible, but it requires specialist tools and a lot of skill; while entertaining on YouTube, it’s not an attack method seen in motorcycle theft. 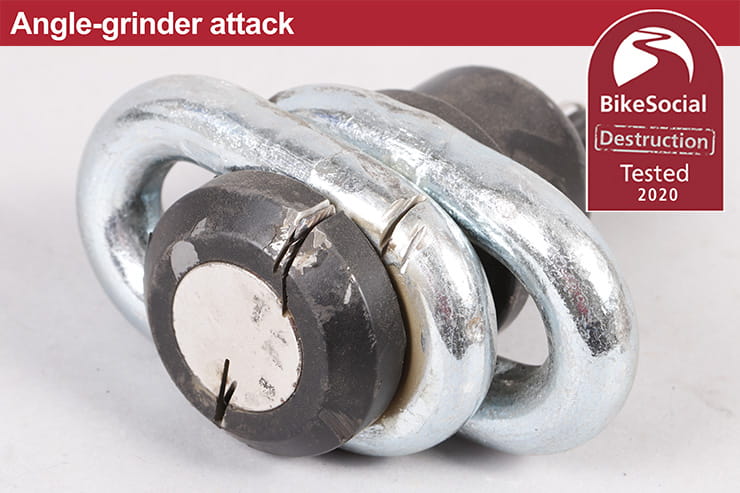 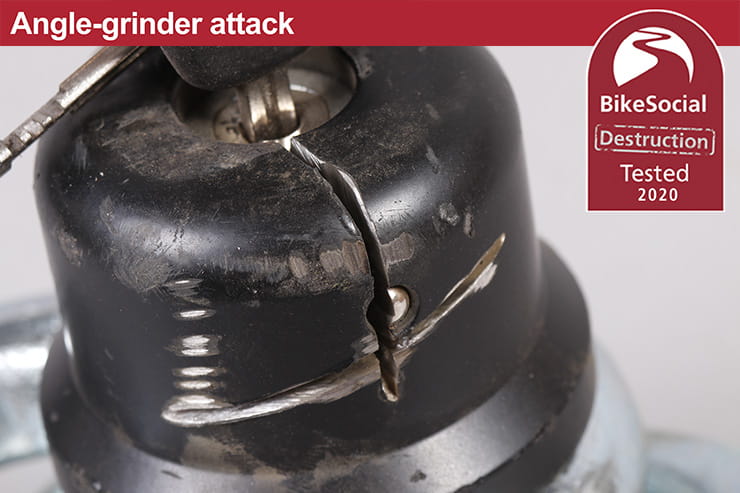 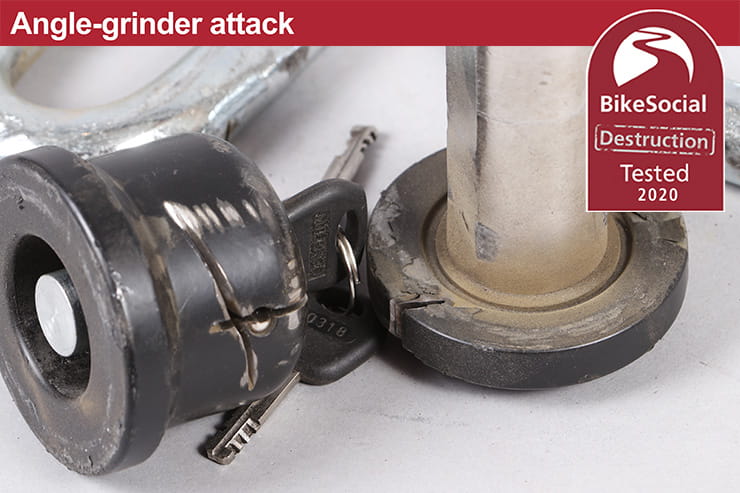 As you’d expect from a 22mm chain and lock, the Milenco Snaefel is incredibly strong. It takes a long time to get through with an angle-grinder (hence its Sold Secure Motorcycle Diamond rating), and it’s impervious to other standard attack methods. This is getting into the realms of a gas-torch attack, but that’s unlikely and only seen in more planned attacks (and typically of higher-value items than motorcycles).

The Milenco Snaefel is up there with the best of the 22mm chains and locks and as such offers your bike some of the best security available.